In reviewing yesterday’s post, I lied.  We saw a cottontail scamper across the road as we drove south on 24, not just cattle.

It’s a never ending birthday celebration.  I could get used to this.

It’s another 28 F day with clear skies.  Looking out the kitchen window, Ellen said “Everyone’s gone.  We’re slow pokes.”  I think there are still a number of people here.  The four tent people broke camp and left.  At Mammoth Campground we saw groups of tent campers enduring 7 degree morning temperatures.  My days of hiking and tent camping in the snow were over years ago. 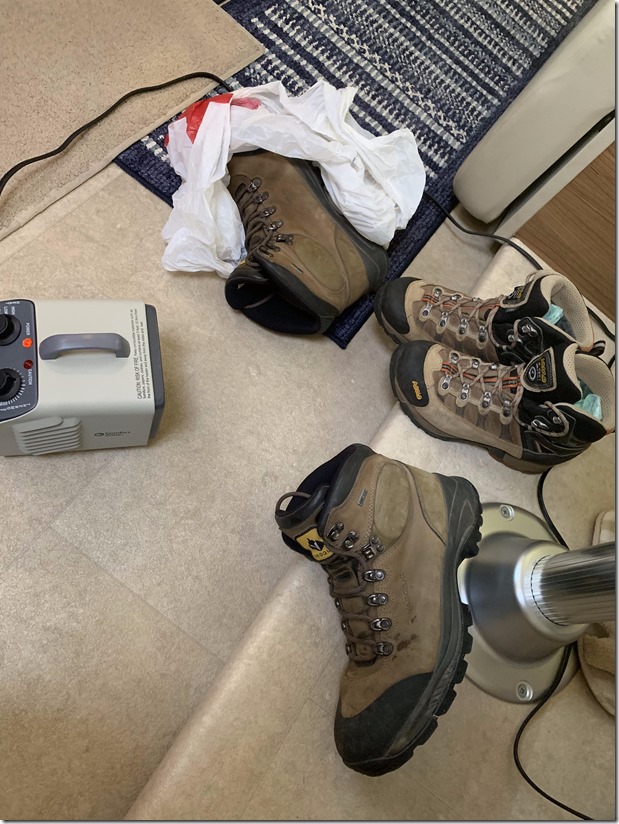 Last night I finished “Roses are Red” by James Patterson.  Though Patterson has a great reputation, I did not like this book at all.  Each chapter is a few pages long.  It makes reading choppy.  There’s little description.  In the beginning it was nearly impossible to know if Alex Cross is a man or woman!  The ambiguity was stunning.  Worst of all was the ending.  It simply fell flat.  There was no resolution for the main character.  We, the reader, knew what had happened.  But the main character is left in the lurch.  Unless there is a sequel, this sucks.  If there is a sequel, I hope it flows better than this book did.  Compare any book by Robert Ludlum.  Patterson is a hack by comparison.  End of Rant!

Oh No.  “You should put away whatever you’re doing so you can eat your croissant!”   “Oh Yes Boss!” 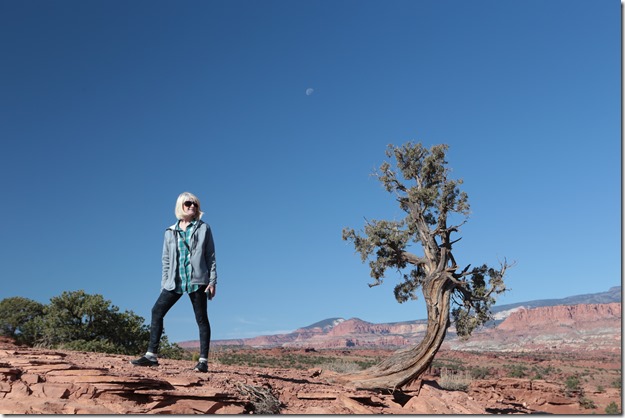 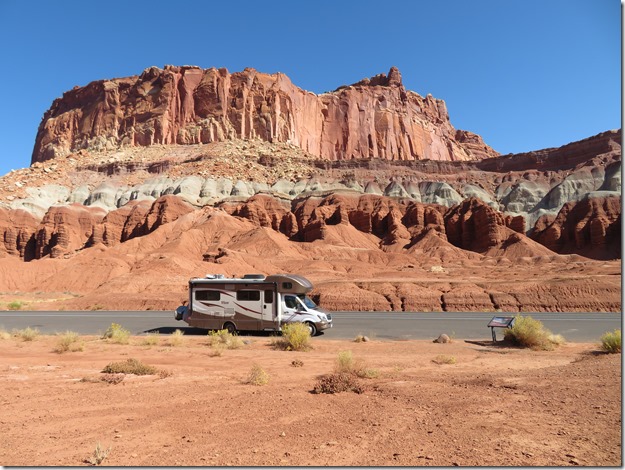 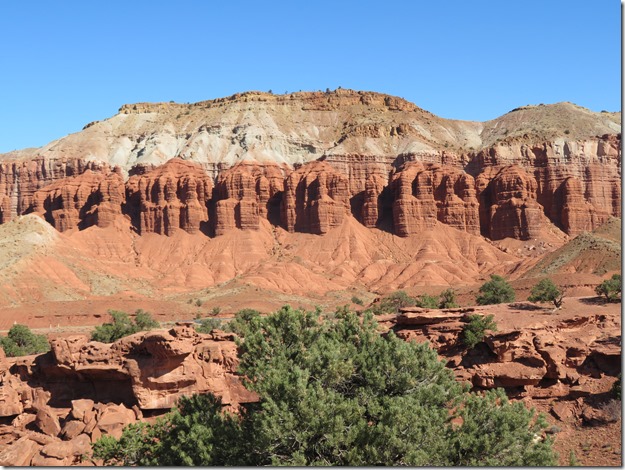 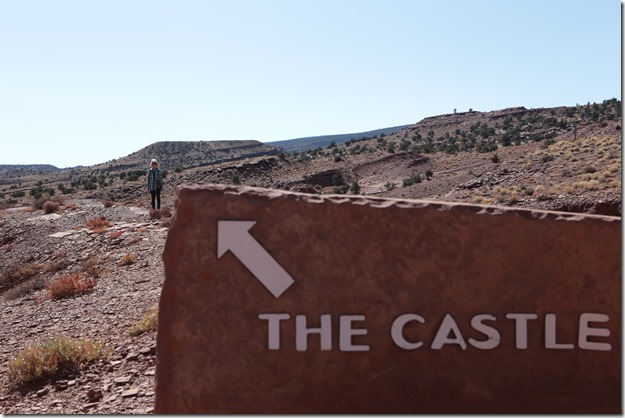 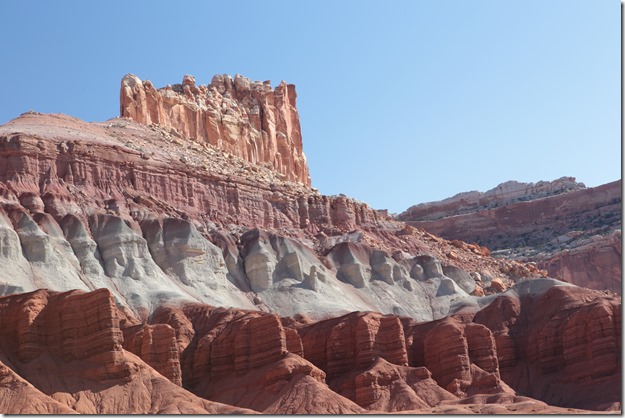 I Should Have Worn Shorts!

Armed with the information Leslie gave us, we drove off to Capitol Reef Visitors Center.   The drive took us through the small town of Torrey Utah.  The tarmac ribbon winds around, up, over, and down hills along a magnificent red rock escarpment.   The geology of the area is there for everyone to see.  Layers of very different rock are exposed to the marvel of all.  There is little vegetation on the exposed rock faces.  The foothills are a mix of grasses and sagebrush with an occasional stunted evergreen.   We were driving through a virtual desert. 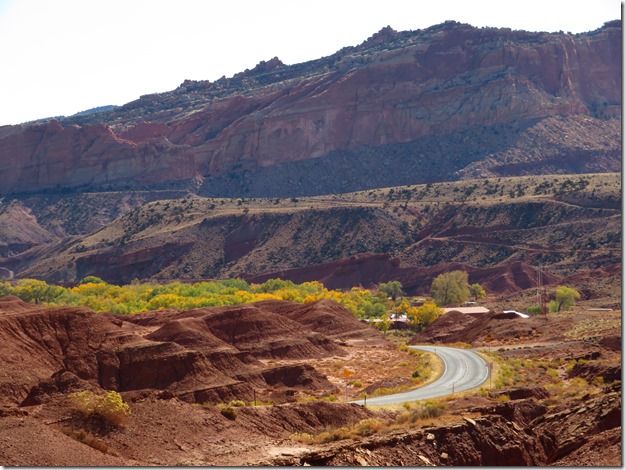 Approaching a Cottonwood Grove and the Visitors Center 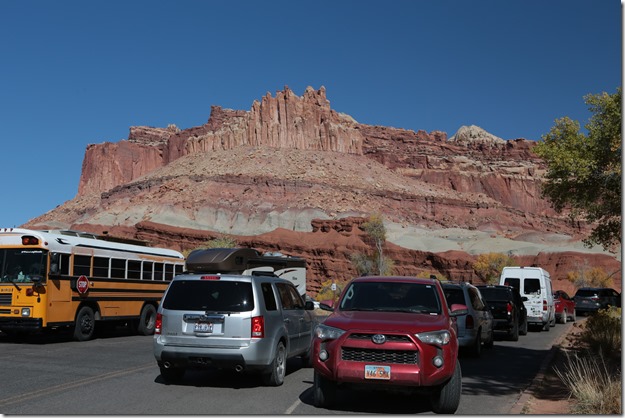 The fist sign you’re approaching Capitol Reef National Park are the cottonwoods.  They stand in defiance of the arid red rocks. Cottonwoods love to have their feet wet.  They thrive along river and creek  banks.  Now, in the fall,  they are vibrant yellow.  We turned toward the visitors center and immediately parked in an oversized parking space.   As busy as the center was, we were very lucky. 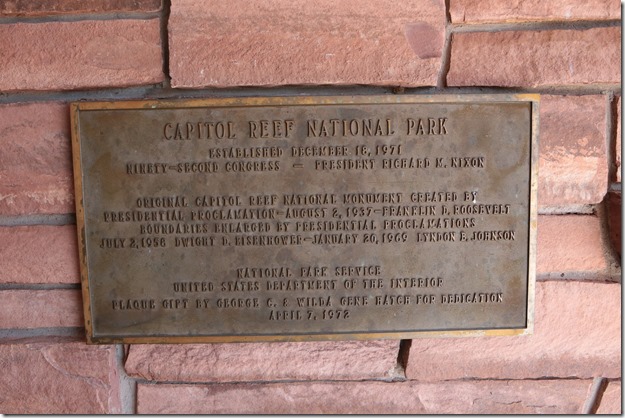 There was an ebb and flow of families at the visitors center.  Crowded one instant, it was nearly empty the next.  As with most touristy information centers, the visitors center is loaded with trinkets and memorabilia.  We found a copy of the tour and trails book Leslie had loaned us.  Among the geological picture books, I found and purchased what looks to be an informative text focusing on southern Utah geological formation.

Back in Li’l Beast we drove the Scenic Drive.  We didn’t get very far.  First we stopped at a picnic area for photos of knurly trees and cottonwoods.  Leaving the picnic area, we passed the Gifford Homestead and had to stop.  The last two vanilla ice creams in the Gifford House freezer went to us.  A trail runs along a branch of the Fremont River just behind the Gifford house.  We walked that trail. 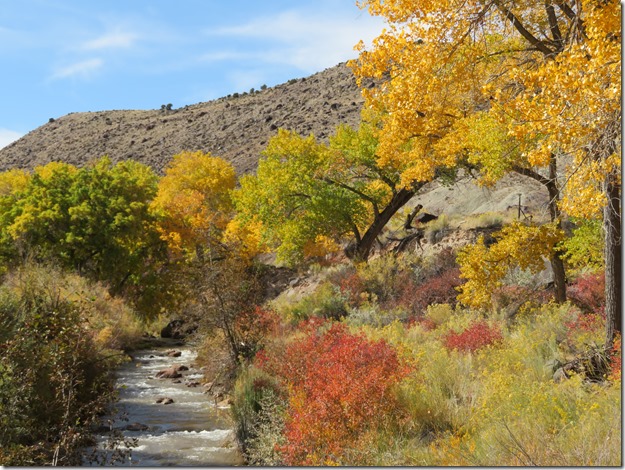 Cottonwoods along the Fremont River

Ellen loves to dally, taking photos as she goes.  I found myself on the trail by myself, with tall thicket standing seven or eight feet on either side of a four foot wide path.   A mama mule deer and her fawn entered the path ahead of me.   I stopped and eyed they.  They stopped and eyed me.  We were twenty feet apart.  I moved a step aside.  Mama deer took two steps toward me.  I moved another step aside. Mama took three steps toward me. The fawn did not move.  I stepped off the trail, and mama strode past me.  I could easily have reached out and rubbed her fur.  The fawn still had not moved.  I pushed a bit further into the grass and the fawn sprang past me in a rush.  I managed to take one photo early in the encounter.

The trail opens onto the campgrounds and into fields of delicious apples and pears.  Visitors can pick fruit from the trees.  Mule deer love the apples and claimed this as their territory.  They were playing together and eating fallen apples.  Two mid-sized males squared off in a mock duel.  The colors of the trees, the young children focused on picking fruit while their parents watched them and the deer, and the deer resting or cavorting weaved a marvelous tapestry of color and motion. 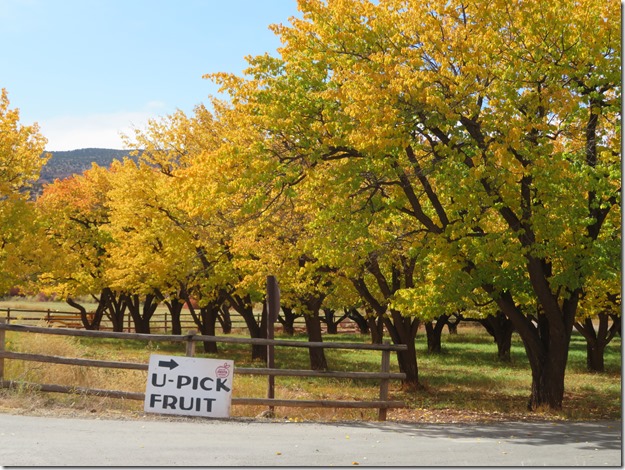 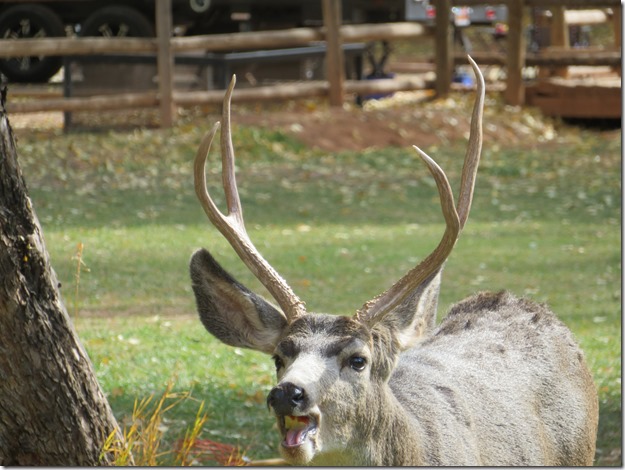 Ellen and I were separated for a while.  I thought she had forged ahead and doubled my pace to catch up.  Not finding her in fifteen minutes, I turned back.  There she was watching the mule deer.  Reunited, we walked loop C of the campgrounds when a fellow said, “If you want a really great photo, look over there”, he said pointing behind him, “There are two bucks with huge racks just sitting there.   You could get quite close.”  He was right, we could get quite close.  I heard Ellen say, “Not so close!  You’re too close!” a few times as I used a tree to mask my forward motion.

The campground is idyllic.  Perhaps we could stay Sunday night.  The camp hosts are in sites 1 and 2 on loop A.  We found a sign outside site 1, “Have a reservation?  Pull on through. If you don’t have a reservation, a limited number of sites may be available at 8:30 AM depending on cancellations.  They will be handed out on a first come basis.”  Cool, we thought, we just have to be here early.   Further up the road another sign read, “Campgrounds Full.  No First Come Sites until Nov. 1st”  Crap.  We’ll stay at Sand Creek. 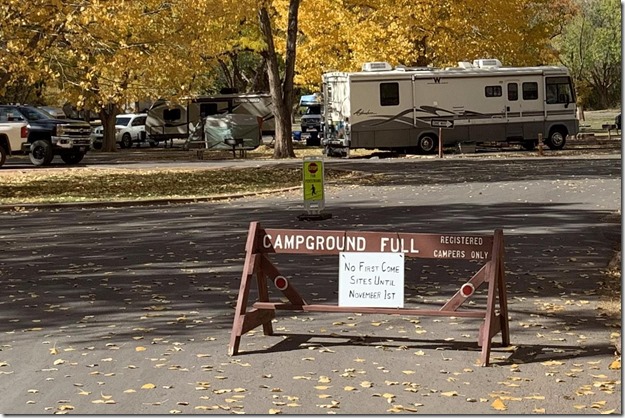 I should have worn shorts!  The weather today was outstanding, 70 F with full sun.  With luck I’ll wear shorts tomorrow.

We drove the remainder of the Scenic Drive out to the turn-around and back.  The road is narrow in places, though easily negotiated at moderate speeds.  We crossed numerous washes.  These are places where cement lines dip in the road  to prevent erosion. These are places where a flash flood could wash out the road.   At one turnoff a sign prominently stated, “Do Not Enter If a Storm Threatens!”   Dangerous flash floods fed by the rugged terrain are common here. 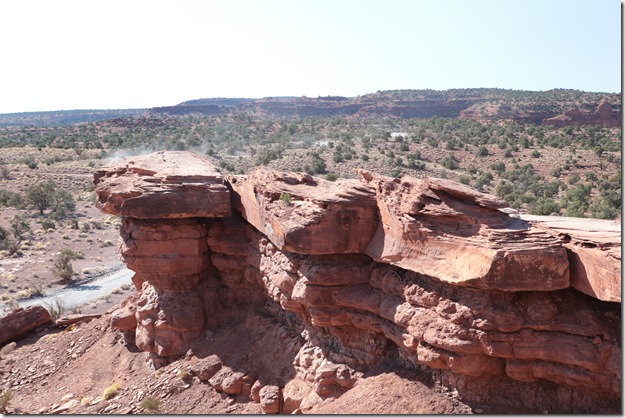 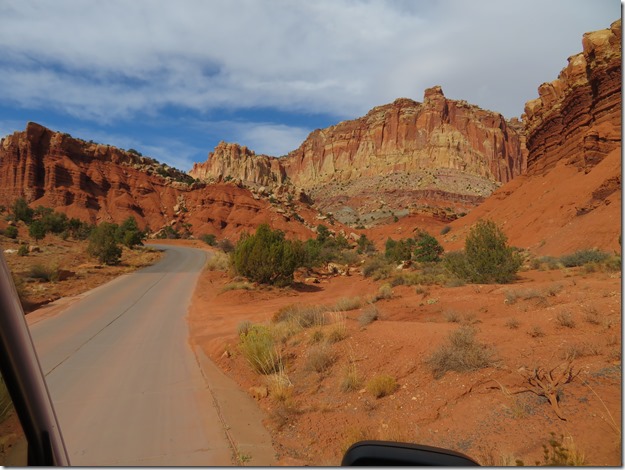 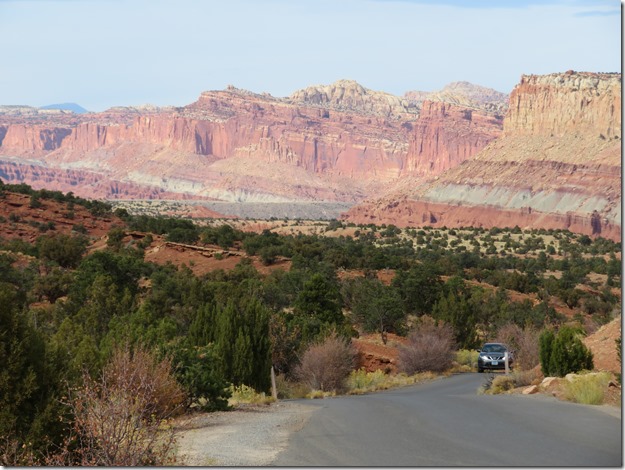 Headed “home” we stopped at the Chuck Wagon General Store in Torrey.  It’s a small reasonably stocked friendly place.  Off season, their bakery closes at 3 pm.

We were settling in at Sand Creek, when a neighbor pulled in beside us.  We took a curious interest as campers will.  I was outside doing something when the fellow came around and asked if I owned my rig.  He said he’d be going to higher elevation and expected the temp to drop to 17  F.  What could he do to protect his water lines.  This led to a discussion of water pumps, external showers, antifreeze in gray and black tanks, for thermal mass fill his water to 2/3.  Provided daytime temps are well above freezing he should have no problem.  Then he asked if I  had wire.  “Why what’s wrong?”  The sewer line on his rented rig had come loose.  He had jury rigged it with tape and wanted something more reliable. “Sorry no tape”  I then helped him get his sewer line working as best I could as an informed observer. His wife, Rosalie said, “This is pretty shitty”.  To which I replied, “literally”.   She spoke what sounded like German, but was significantly different.  “Dutch?” I asked.  “Yes, we’re from Holland.  We had visited our daughter in Los Angeles.  Now were on vacation, but with this.”

“Do you have a screw driver?”, Han asked.   I pulled my took box out, “Here’s what I have.  Here’s a screwdriver.  Use anything you need.”  After a while he got the sewer line to drain using a wand attached to a hose. He drained and cleaned his tanks, then secured the broken line with aviation clamps.  “That should hold for a while” he said.

We shared some wine to celebrate the end of their misfortune and chatted about politics, and the 75th anniversary of the liberation of Holland.  The 75 anniversary of the battle of Arnhem was last week.  I mentioned HBO’s Band Of Brothers, a miniseries, as devoting one episode to the Battle of Arnhem.  As we spoke the wind came up.  It grew cold.  We exchanged information: email, phone numbers, addresses.  If you’re ever in Holland/San Francisco call and we’ll get together.

While chatting, Han mentioned there was one of these huge RV Busses that went off the road recently.  There were 30 Chinese who had rented the bus through a Chinese company.  Four of them died, the other 26 were hospitalized.  He said he stopped to help a group of Chinese who couldn’t speak a word of English, let along Dutch.  He said they had plates stacked high in the kitchen sink and the RV stank. Their electrical was out.  They had probably drained the house batteries.  “How can they safely drive in the U.S. without understanding the road signs?”, Han asked. “At least someone should speak English!” I thought of driving in Italy and Germany where I certainly do not speak fluently.  I did take the time to research road signs.  Perhaps the Chinese did too.  Who knows?

Han also sang the praises of Bryce Canyon.  He said, “You gotta do this” and he explained where to go, which hike to do, and what to avoid.  Not only can you see the hoodoos, but you can walk among them.

I asked Rosalie where they were from, “Holland” she answered.  There is a distinction made “in country” between being from The Netherlands and being from Holland.  Holland specifically refers to Noord-Holland and Zuid-Holland.  Amsterdam is located in north Holland and Rotterdam is located in south Holland.  Han said “Amsterdam is a zoo.  There are too many tourists. Rotterdam used to be like Amsterdam before the war. It was heavily bombed by the Germans.  There are some old parts, but most of Rotterdam is brand new.”

In honor of our freezer/refrigerator going out, we cooked all our “frozen” burritos tonight.  With enough Lime Cholula and salsa slathered on top, they were great.

Just before my conversation with Han, I had opened a beer that fizzed all over the kitchen counter.  That put Ellen on edge.  A bit later I had a 2nd beer (a no-no, just ask Ellen) and it too fizzed all over the dinette table.  That put me in the dog house, bigly.  Then having a glass of wine with Han was too much, until I invited her to the party.  She and Rosalie chatted up a storm.  All was forgiven, or at least forgotten.

We’ll stay at Sand Creek another night.  Tomorrow we’ll take two hikes, weather permitting.   Tonight the wind is knocking Li’l Beast around.  We’re swaying side to side as if a huge hand is shaking us.  No rain thus far though. 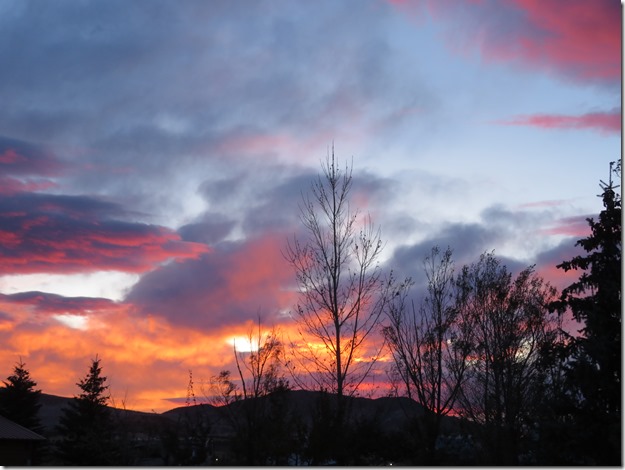 Changing Weather and a Violent Sunset