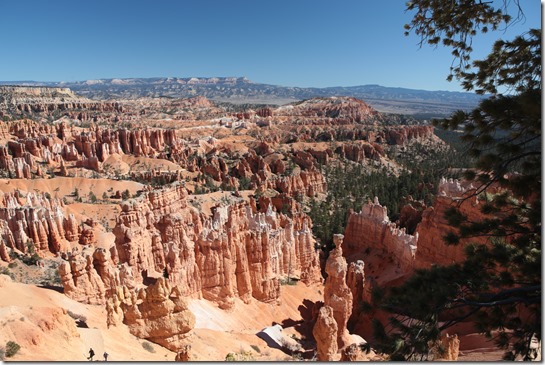 Well, no!  Today was not one of those days.  We took our merry time getting up. We each had two cappuccinos and packed for a hike.  With the cycles locked to a rack at the RV Park, we finally headed off to the park at 11:30!

The Navajo Loop Trail starts at Sunset Point, a very popular overlook.  We knew we were in trouble when we saw four busses in the buss parking area and cars ahead of us jockeying for a spot.  I did two loops.  There was no space for Li’l Beast. Sunrise Point is less popular, but has even less parking. We’d have to try.  Then it hit both of us, “Why not park at the lodge?”  The lodge is very close to sunset point; we’d have a very short walk to the trail head.  I turned in toward the lodge then turned up into overflow parking.  With just two other cars parked there, we were in. 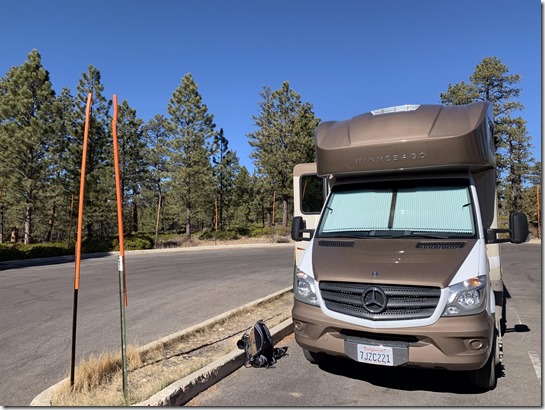 The day was cool, even cold in the shade.  A light breeze rustled the trees as we set off.  We dressed in layers.  There are well worn paths from overflow parking that swing around the cabins, and go right to Sunset Point. 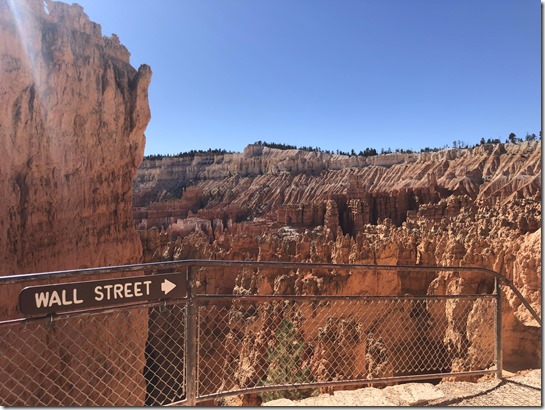 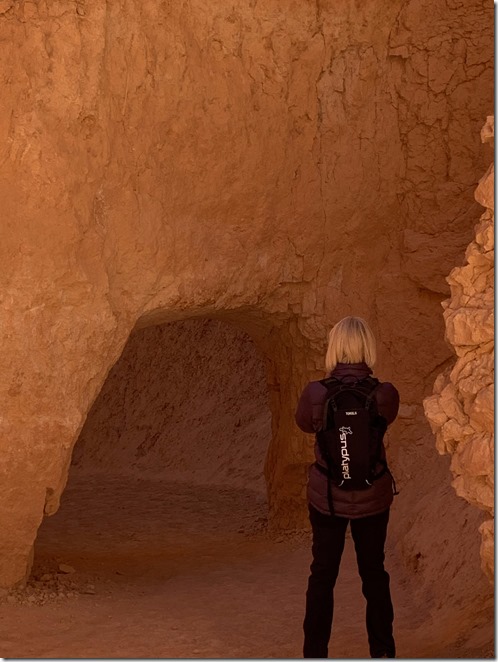 The First of Many Portals through Wall Street 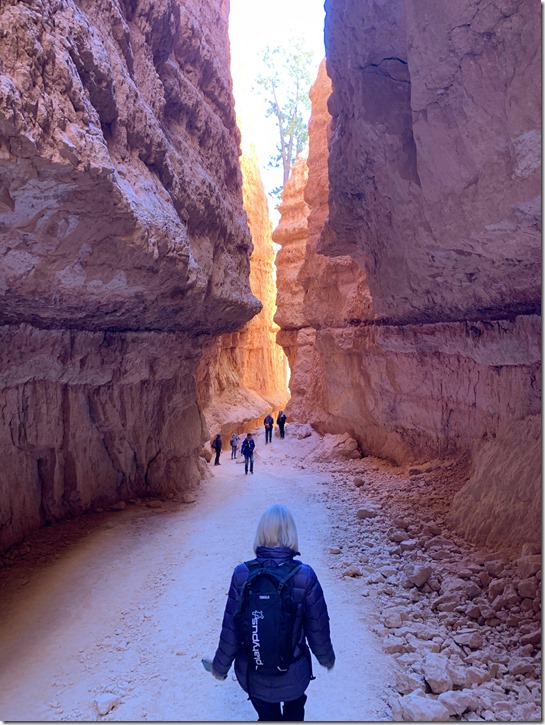 Wall Street, Down In the Hoodoos 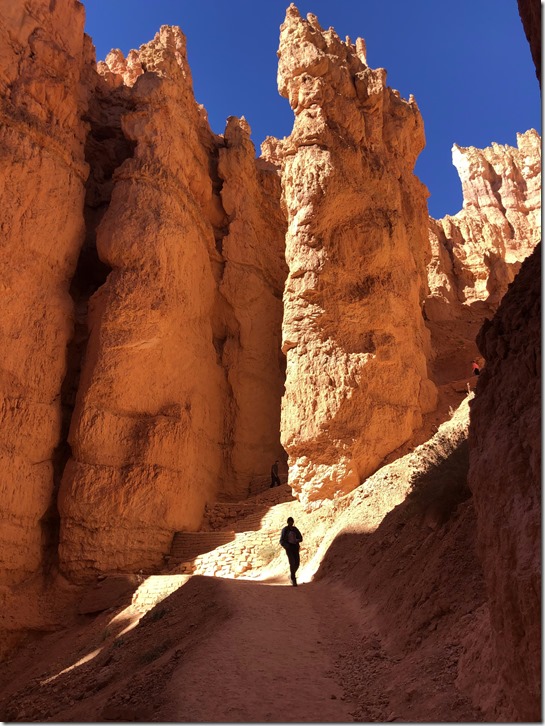 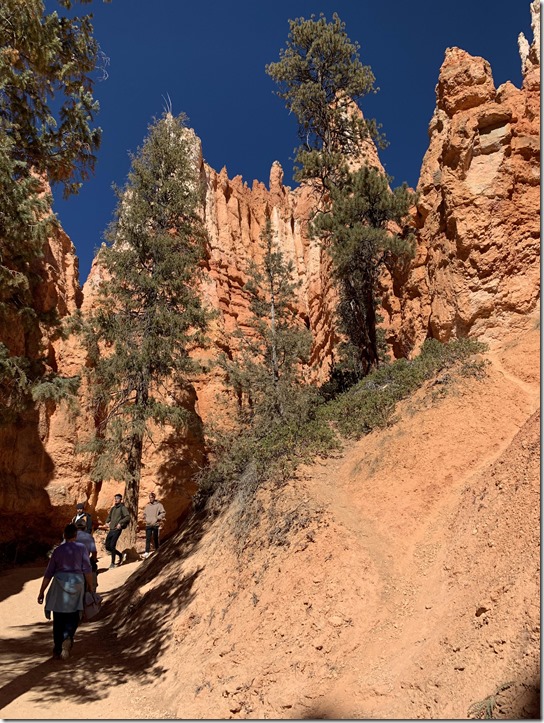 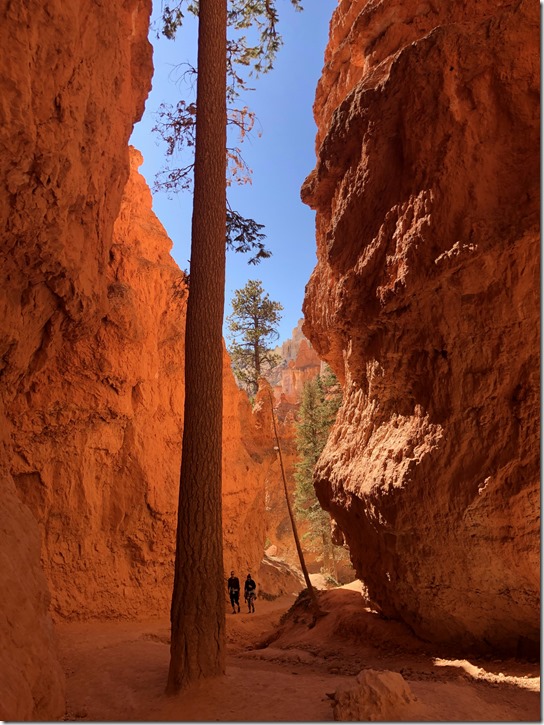 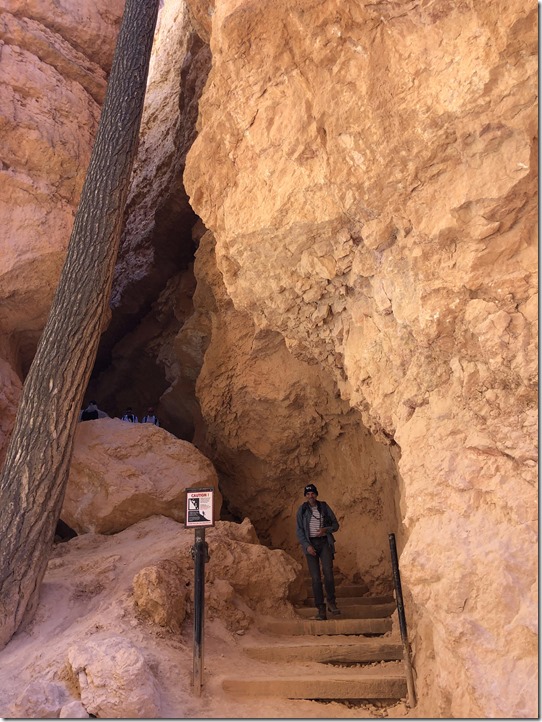 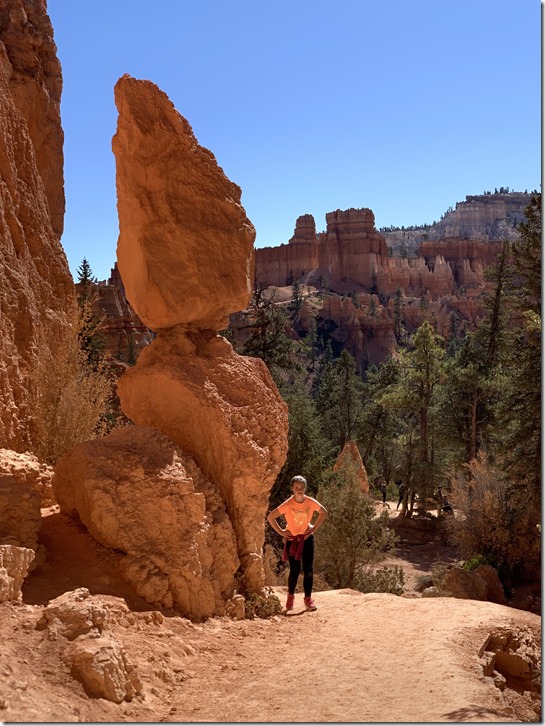 Stable, but for how long? 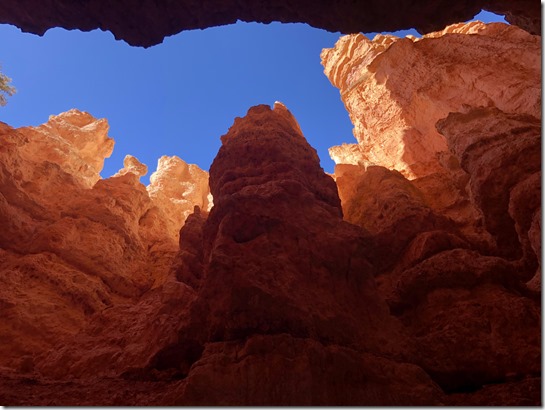 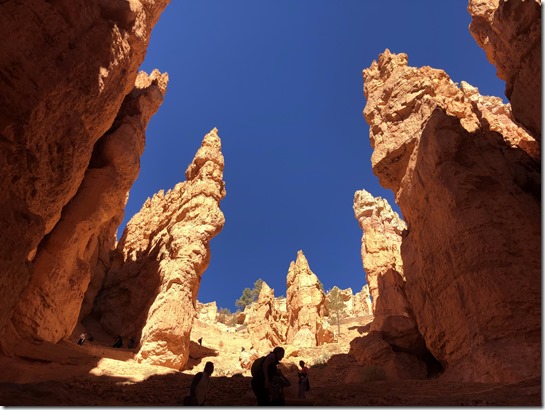 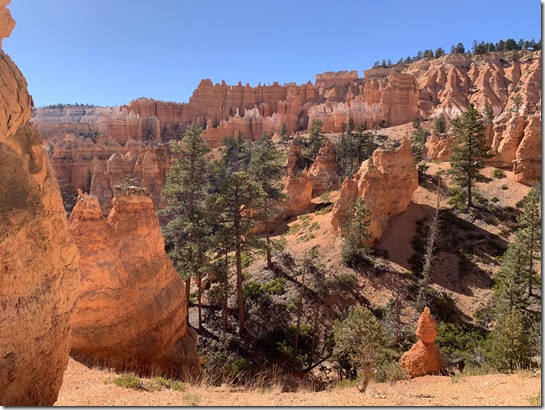 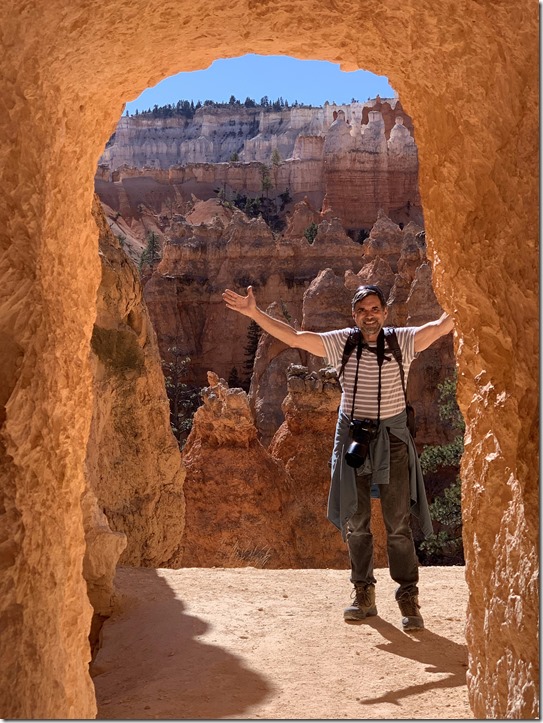 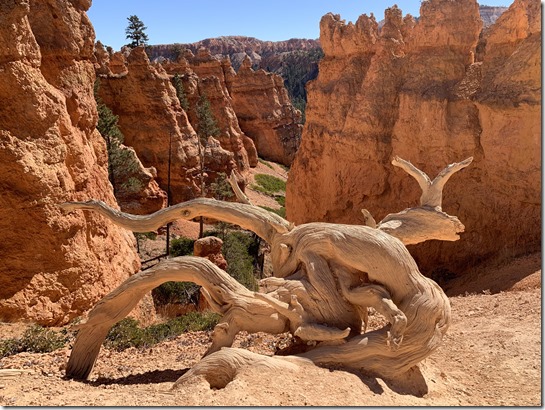 What a trail this is!  It starts with dramatic vistas over hoodoos and knife edge ridges.  The trail switchbacks down a steep wall toward the hoodoos and the valley floor.  We dropped to hoodoo height and below. The trail winds through stunning walls of red rock.  This is “Wall Street”. The Navajo Loop Trail is one of the most popular trails in the park.  There were many on the trail, though I never felt crowded.  From time to time we were alone on the trail!

It felt like international day to us!  We chatted with people from Italy, Germany, France, Spain, Korea, and China.  We met people from all over the Unites States. Franco, an Italian fellow, said he’s living in Boston and came to Las Vegas for a convention.  He had wanted to visit Bryce for twenty years.  With the convention over, Franco took a day for himself and came to Bryce.  Today was the best weather for hiking.  There was little to no wind and practically no clouds in the sky,  The temperature was comfortably cool.

I was surprised at the fir trees that have grown among the walls and hoodoos.  They’re practically invisible from the overlooks, masked by the red rock walls.  Navajo Loop Trail connects to Peekaboo Canyon Trail and Queens Garden Trail.  Han, the fellow from Holland we met Capitol Reef, recommended taking Queens Garden Trail and not taking Peekaboo Trail.  We took his advice.   “The Queen” sits high on a ridge.  She is visible from a short side trail from the Queens Loop Trail.   A few people opted not to take the walk, “It’s just another rock”.   It’s really a short walk and worth it.

The Queens Garden Trail switchbacks back up the valley wall.  Views from the trail are spectacular and make the slog uphill more tolerable. I’m told that Peekaboo Trail is far steeper.  I was glad we took the Queens route. 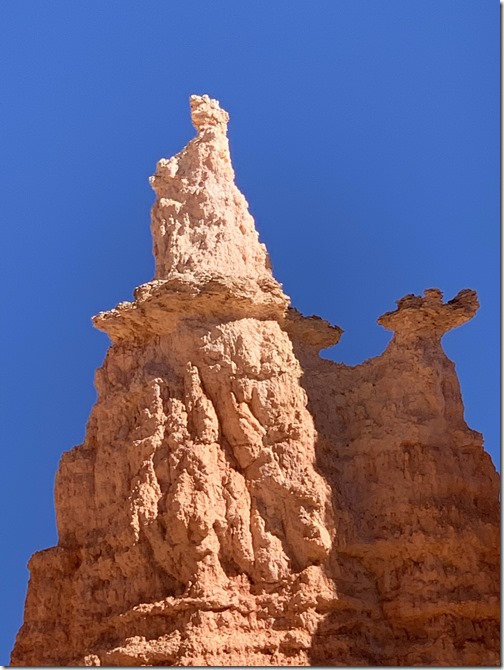 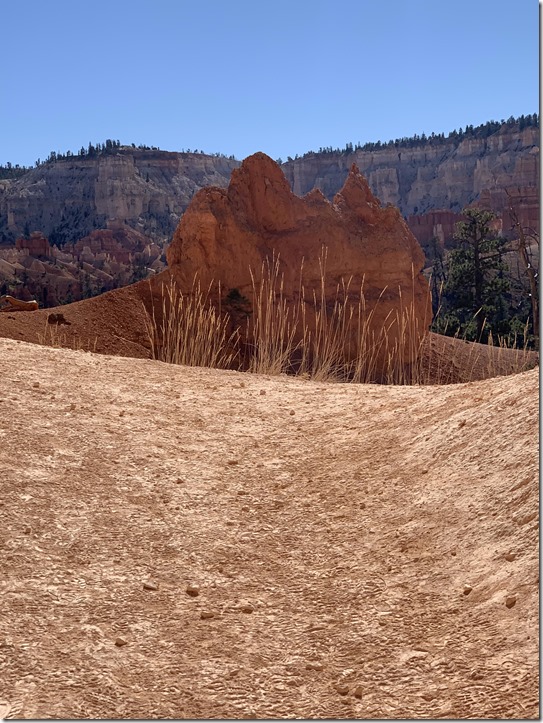 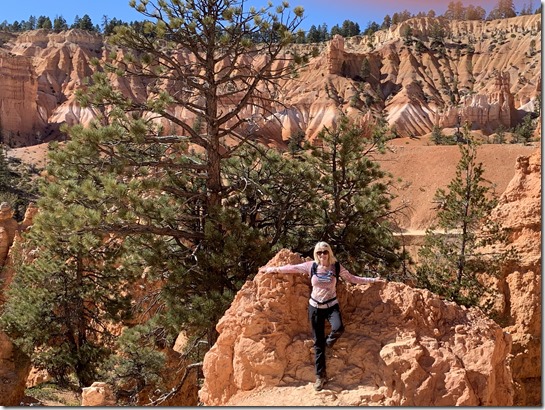 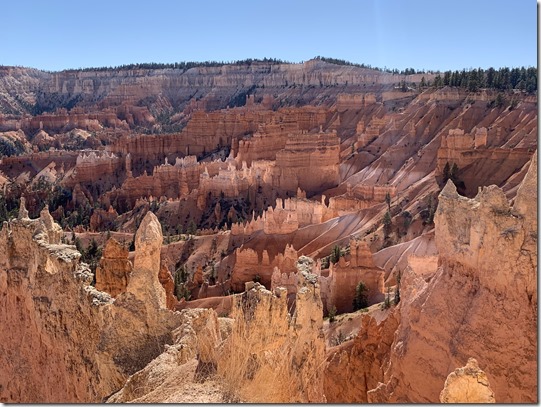 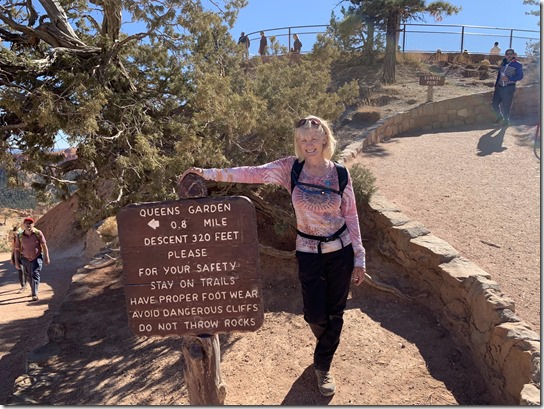 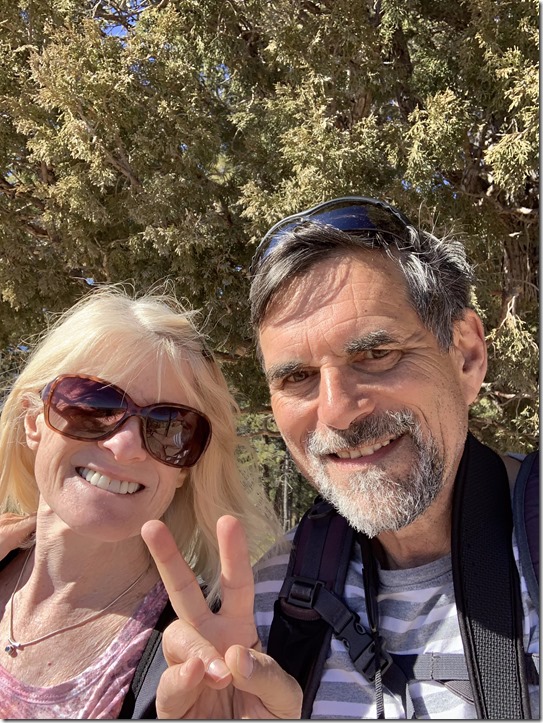 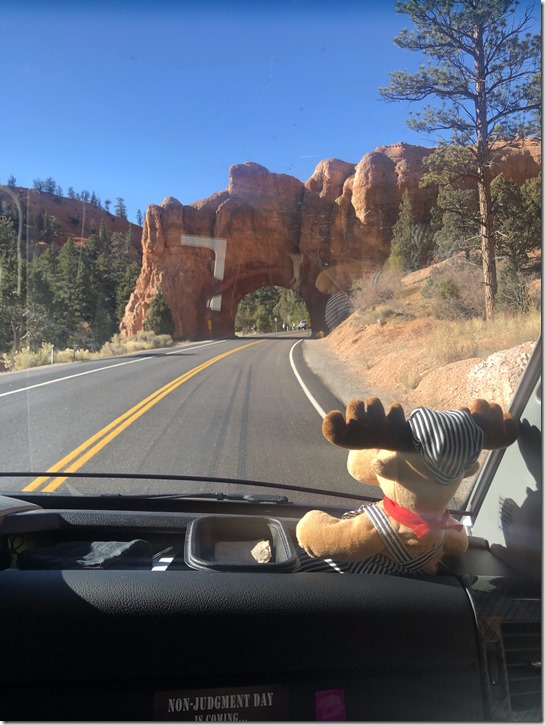 A Bus Waited for Us to Pass!

“Let’s go to Red Canyon”, Ellen suggested as we readied to drive off.  We drove north on Ut-63 and west on Ut-12 toward the canyon.   We were both hungry as we passed Bryce Canyon Pines Restaurant and drove on to Red Canyon Visitors Center.  Along the way Ut-12 passes through two red rock arches.  We easily had clearance, though we saw a bus-sized RV waiting for a break in traffic before heading through.

Tour busses stop at the visitors center for a pit stop.  Two busses pulled in while we were there.  In both instances a very few people entered the visitors center.  Most hit the restroom and milled about outside.  Inside we spoke with Josh, the ranger behind the welcome desk.  He seemed uninterested as we asked a few questions about local hikes and getting to the canyon.  We asked about wildlife.  That piqued his interest.  We talked about bear and mountain lion. Deer and isolated trails in the Dixie Forest.  He spends as much time hiking in the forest as he can.  He loves being outdoors and the isolation of hiking alone.  “I’ve never seen a bear back there, but I’ve seen scat and prints!  We have black bears here.”   The center has a series of photographs of the most common plants of the region.  You’ll find taxidermy mounts of common animals as well..  I’m not a fan of taxidermy. 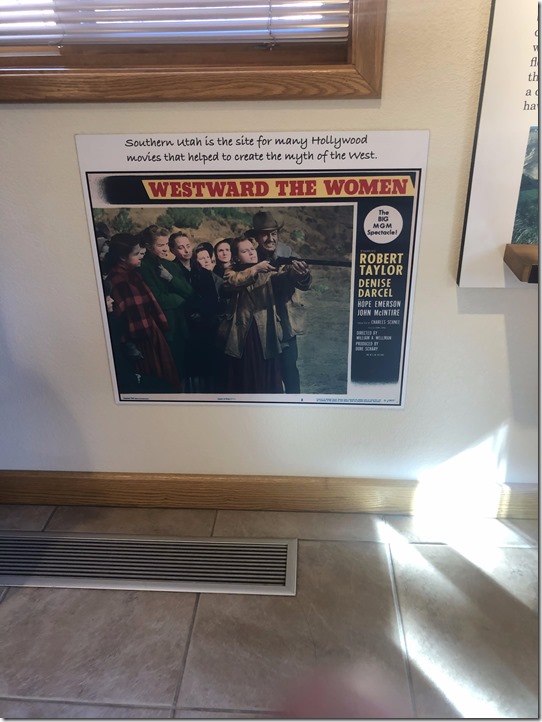 We both felt it was too late in the day to begin a hike and skipped continuing on to Red Canyon.  Turning back, we stopped at the Pines Restaurant for lunch.   This is one of the better restaurants in Bryce Canyon.  I had a grilled cheese and ham sandwich.  Ellen had an open face turkey sandwich.   My ham and cheese was ok.  Ellen though hers was too salty.  We had a slice of cherry pie that was better than average, but not excellent. 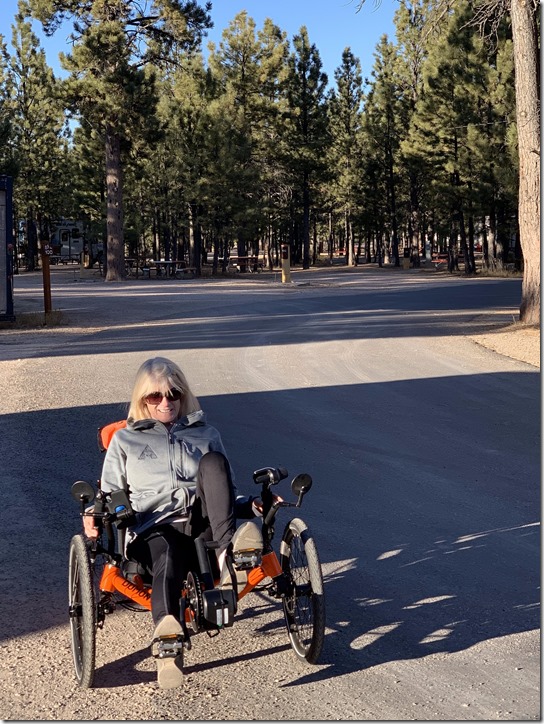 We headed back to Ruby’s RV Park for the evening. 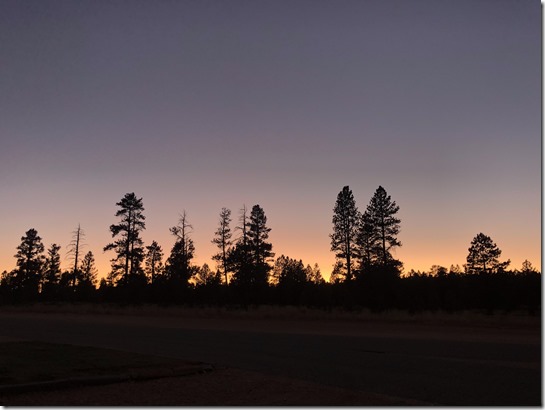