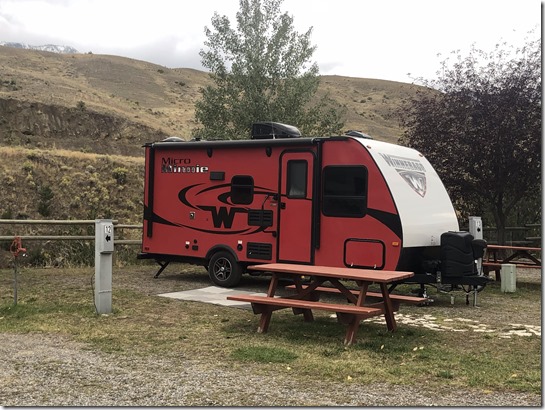 Again we were warned that overnight temperatures would drop below freezing and again it did not happen.  After midnight the low was 32 F and the high was 40 F.  It’s cold outdoors for a Californian, but it’s non threatening to an RV’s water system.  Wednesday is projected to be sub freezing all day though temps Tuesday and Thursday would be above freeing during the day.  Do I winterize, or do I find a way to heat the water tank and outside shower for 24 hours?    I’d much prefer the latter. Li’l Beast has the winter package with heaters on the gray and black tanks and a vent from the heater to the fresh water tank.  There’s a light in the water bay that should keep the outside shower lines from freezing.  I’ve been reading about using terrarium heaters  to avoid frozen RV plumbing.

At 8:57 it’s 37 F outside. I’m in no hurry to venture outdoors.  Rain and Snow is forecast for today and tomorrow.  The skies are darkening.

Ok, so Ellen said it’s not uncommon to celebrate decades birthdays for days or a week even.  Really, can I celebrate for a month or year?  Cool.  Ellen chirped, “Happy Birthday” again this morning.

And In Florida Today

A mother tried to kill her children by slamming her van into a tree at high speed. “He put a hex on me and caused the crash” speaking to police about her husband. 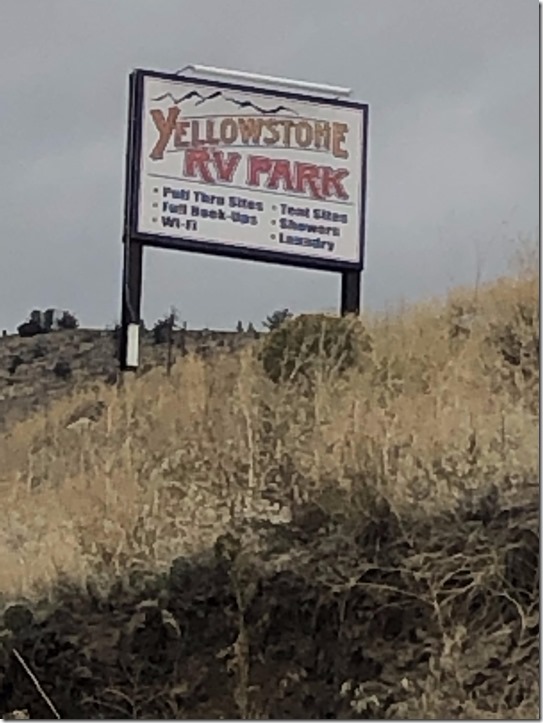 Ok, but There is Better! 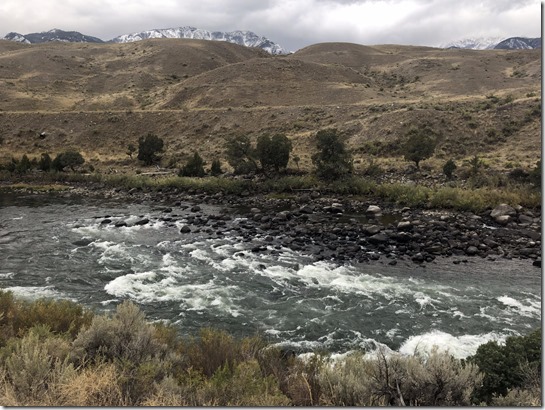 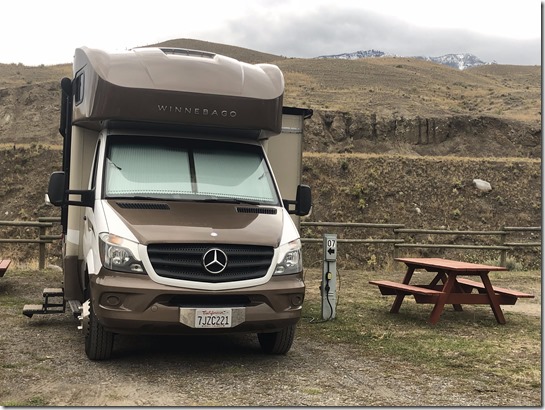 Today we do not have any plans per se.  We’ll wing it.  See what’s out there and go where our hearts take us.  We stayed at Yellowstone RV Park last night.  it’s ok.  Rocky Mountain RV Park was full yesterday.  I called this morning and have a site reserved for tonight and tomorrow.  It’ll be good to have electricity with snow on the way.  There’s a scarcity of motorhome supply shops here.  We need some non-toxic antifreeze “just in case”.  Perhaps a general store or market will carry some.

We’ll spend the day at Mammoth walking the hot springs, the visitors center, and enjoying the resident elk.

Ellen spotted a camper using a unique method to protect their windshield wipers.  We use the same material over spots we’d bonk our heads inside.

Ellen and Curtis off to View a Site

Rocky Mountain RV Park sits on a bluff above the Yellowstone River overlooking Gardiner.  We drove there yesterday, saw a FULL sign, and turned away.  This morning at 10:01 I called. “Oh we have many sites open, come on up!” a happy young woman answered.   We stopped at the local grocery for milk and Kleenex.  They carried RV antifreeze.  SCORE!  Not that I want to winterize, but now I can if I have to.

I parked at the RV Park and Ellen headed to the office as an electric car pulled up.  Curtis hopped out and greeted us.  He’s a bundle of energy.  The weather has driven most of their long term renters off.  They have lots of sites.  He offered to show Ellen the sites and off they sped in the golf cart.  Moments later they returned.  Ellen was happy with the site.  An added bonus, elk roam the campground.  One massive bull was sitting on the far side of the camp.  We signed up for two nights, hoping to be in place as the rains/snow this evening and tomorrow subside.  I really enjoyed talking with Curtis.  He said some locals think they’re crazy.  They’re one of the first to open and one of the last to close every year.  Sometimes they have burst pipes, but that’s the price of taking risks.  They plan to turn the water off Monday.  The truly cold weather arrives Wednesday (so say the meteorologists). 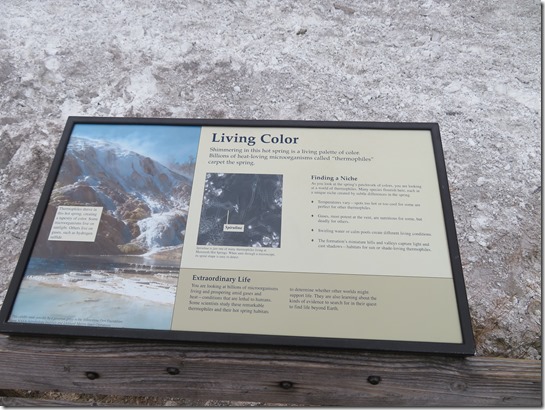 There were zero cars going into the park as we pulled up to the kiosk.  Kia opened the window, “Hi, how are you guys?” Kia is an early 30’s ranger who really enjoys her work.  With no cars behind us, The three of us chatted a bit about the park, Yosemite, the weather, and wolf sightings.  “I hope to see you guys again!’ “Oh you will!”  Parking in Mammoth was stress free.  There were many open spots for an RV.  The visitors center was just as I remembered it. The photo of the mountain of Bison skulls stood where I remembered.  That photo had and has a profound effect on me.

Bison Skulls to be Ground Up for Fertilizer!

Lamar Valley is further from Mammoth than I remembered.  “If you want to see wolves, go to the valley at first light.”  How many are in the pack?  “Maybe about ten”  Getting to Lamar Valley at first light will take getting up very very early for us.  We tried doing just that last year, but a good snowfall over the passes turned us back and out of the park. 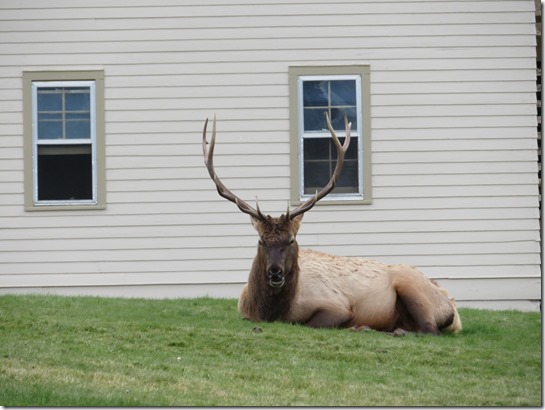 We walked to Mammoth Hot Springs, stopped at the general store for a hot chocolate and hot pretzel.  At the cashier I said, “Just these two hand warmers.” We stopped in the Mammoth Dining Room, but figured we had better food in The Beast.  The Mammoth Hot Springs Hotel is open, has an interesting gift shop, and a lounge.  We didn’t find anything of interest in the gift shop.  The lounge’s bar was closed; I had no plans for a drink anyway. 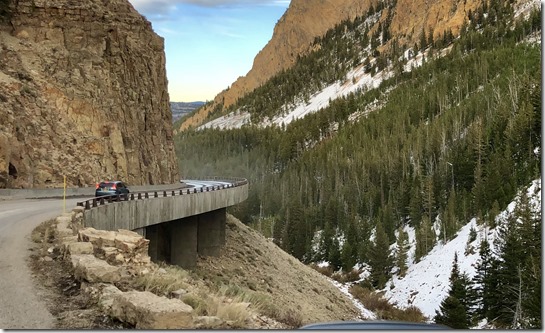 Driving back we saw two elk harems.  Ellen said “Stop” as I approached a turn-out near the exit kiosk.  The something she had seen was a group of prong-horned sheep, a harem.  Five females with a single male.  We saw more elk as we watched the sheep.  They are alternately called sheep or deer.  Their closest living relative are giraffes and okapi!  Last year getting diesel near Butte, we noticed photos of pronghorns on a wall.  Ellen remarked on it and the young gal at the counter said, “They’re really fast and they’re great eating.”  I didn’t mention the ones we had seen in Yellowstone then and I wouldn’t now. 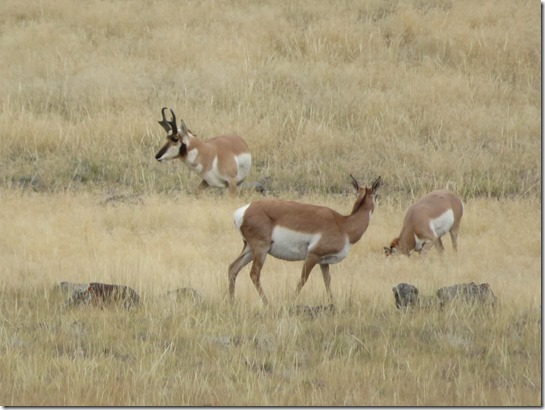 “Let’s go back to Rocky Mountain, have lunch, and walk Gardiner. We could have dinner later.”  We agreed we could dress warmer and be more comfortable.  We ate the last of the chili while watching a few elk graze on the fresh grass as the sun came out. 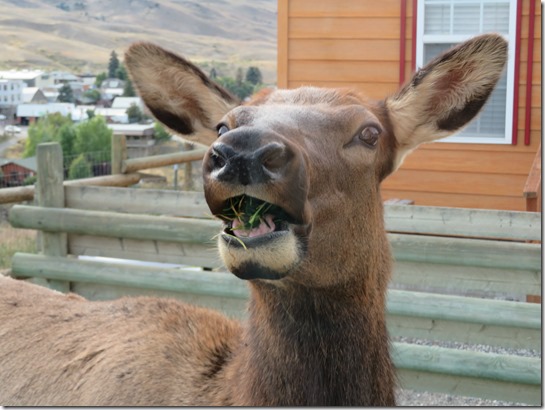 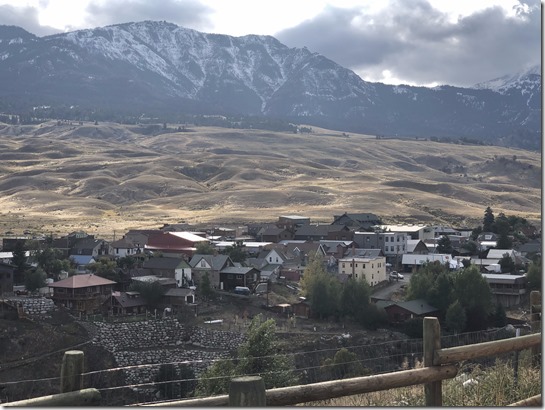 The View of Gardiner from Site 45

Headed down the hill to Gardiner we met Curtis walking home.  “Hi, we forgot the name of the restaurant you recommended.”  “Are you walking?”  “Yes.” He mentioned three: Cowboy’s just across the bridge, Wonderland Café as the best in town that’s open, and some other I’ve forgotten. 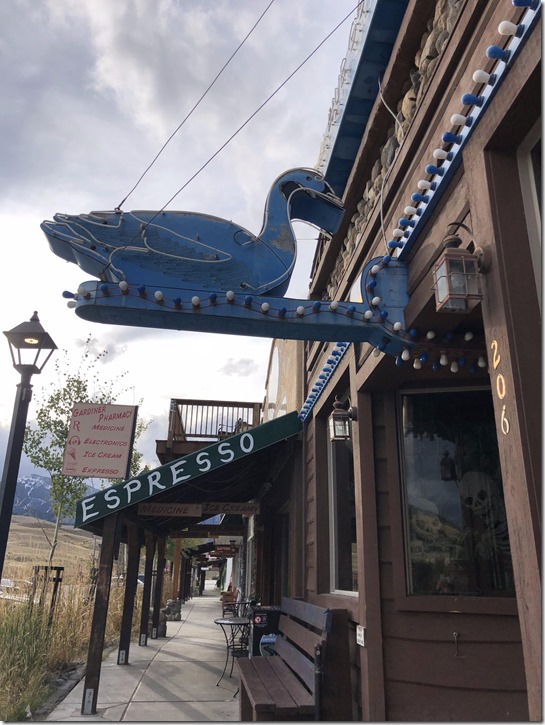 We walked downtown Gardiner, which is very small. Most restaurants are closed for the season.  Most inns have vacancies if they are open at all.  There were a few espresso shops open and Rosie’s for breakfast, all the outfitters and tour operators are closed, though one outfitter offered XC-Skiing tours.   It felt warmer than our walk to Mammoth Hot Springs earlier.  We remembered stopping in here and grabbing a bite there last year. We had fun reminiscing.  Yellowstone Wild was open.  C Thomas Hoff was at his desk just like last year.  His photographs pop off the page, just as they did last year.   One photo in particular, well two actually, but one well; Ellen and I discussed where it could go.  Over the fireplace?  But it would break up the wall.  It would look great there.  But I don’t think the colors would go well.  The blue and gray would be perfect.  But the blue isn’t the correct color and we’d have to put holes in the stone.  No we could drop the piece from the ceiling on transparent line.  How about in the stairway?   It was a losing proposition for me, but we were discussing color not price.  “It’s late in the season.  If you take it with you, I’ll give you 20% off.  Ellen liked that.

We ate at Wonderland Café.  When we arrived the restaurant was nearly empty.  Ellen had butternut squash soup, some of my side salad (which was served in the coldest salad bowl ever), and some of my mac & cheese with pulled pork.  The pulled port was laced with maple syrup.  It was scrumptious.  By the time we left the restaurant was full with people waiting for seating.  Wonderland also has a bakery with some great looking scones on display.  Their huckleberry were sold out.  “Tomorrow” we said simultaneously. 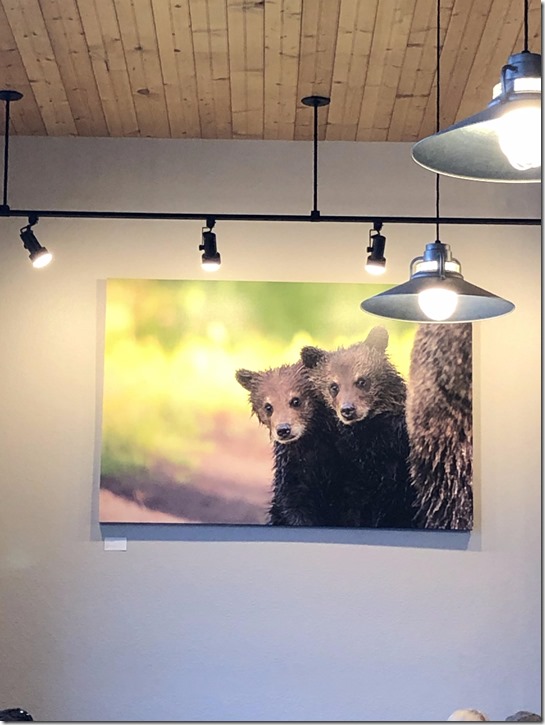 Photograph on the Wall at Wonderland Café

We stopped at Cowboy’s but didn’t bother to go in.  It has a distinctly old west look and feel.  It looks like a good place for a burger and a beer.  I wouldn’t expect much more. 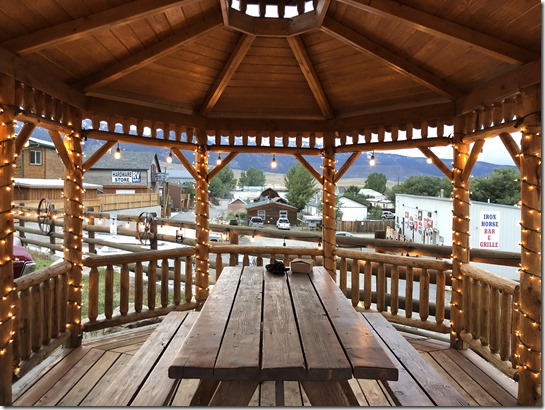 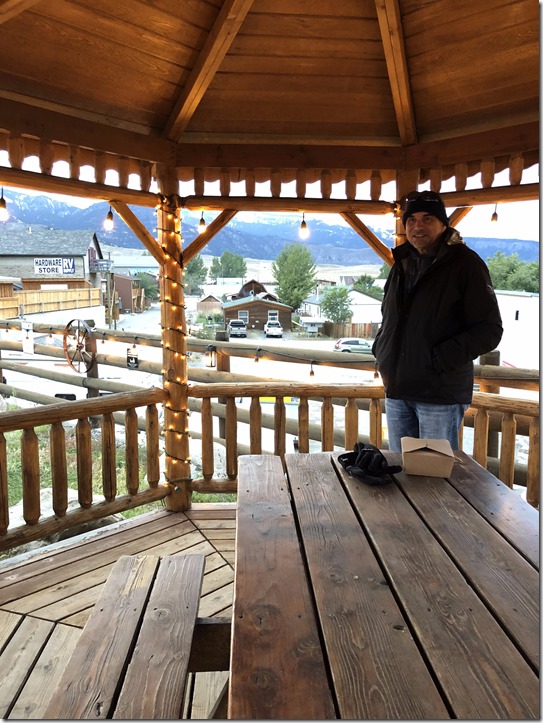 Cold and Dressed for It

We walked back over the bridge that’s under repair and down the street past the market before turning back. The scattered tour operators were closed.  We passed an elk youngling in one yard, a deer in another, and a skittish fawn who sped away.  Some houses had high wire around their yards and plants.  As twilight set in we walked back up the hill to Li’l Beast then looked for the laundry and showers.  We were back “home” at 7:43 when the first few rain drops fell. Twenty minutes there’s some serious rain falling.  Will we have snow overnight?

If it’s cold & stormy tomorrow, we’ll  hunker down for the day.  With no reservations driving us onward, we can stop where and when we like.

A Great Gate and Li’l Beast in the Background 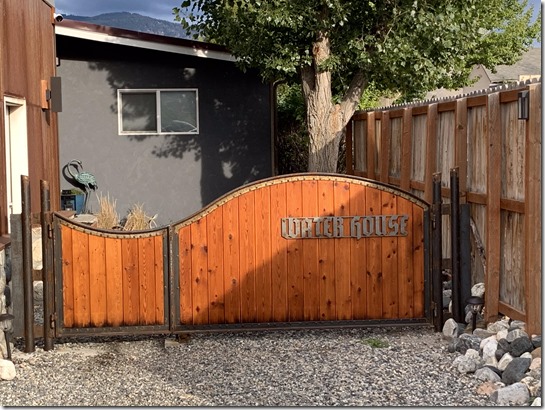 It’s Too Cold for a River Run IMO 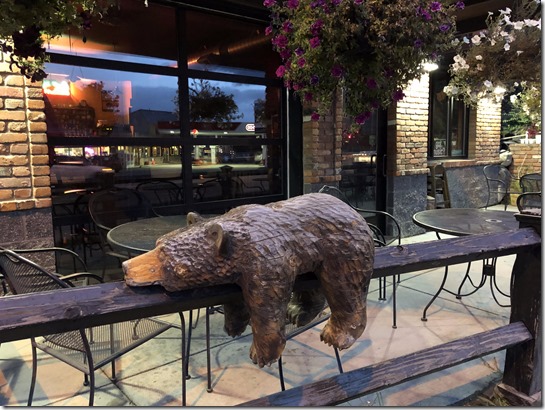 Ever Feel This Way?