We’re camped along RR tracks. While watching Suits last night a huge train went by.  It started as a low clicking sound and grew to a crescendo.  Ellen jumped up, “that’s not a train”.  A heavy downpour had started.  We battened down The Beast and swabbed the decks.  In our RV travels over the past two years we very seldom had mist or rain.  This was a deluge!   Good stuff.

Overnight the rain abated and started afresh around 6 AM.  Visibility is poor.  it’s not the best day to be going up Mt St Helens.  Do we push on or stay? 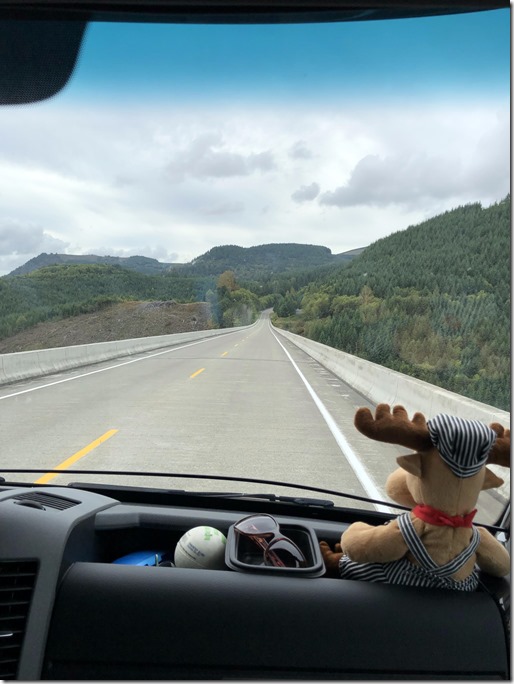 Cog Moose, On The Road Again 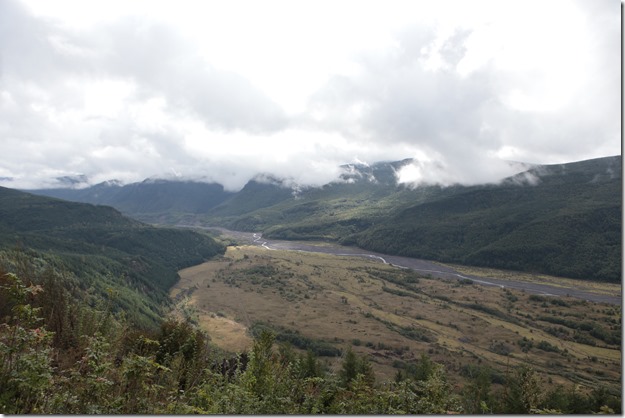 Toutle River with 60’ of debris filling the valley floor!

We had a leisurely morning the drove SR 504 to the three Mt St Helens visitors centers.  Each center focuses on a different aspect of the eruption with different movies playing on a loop.  The extent of the mud and ash flow in the Toutle Valley is jaw dropping.  The sludge that ran down the Toutle River ran all the way to the Columbia.   The Columbia River’s shipping lane filled with mud, ash, and trees; closed; and had to be dredged. 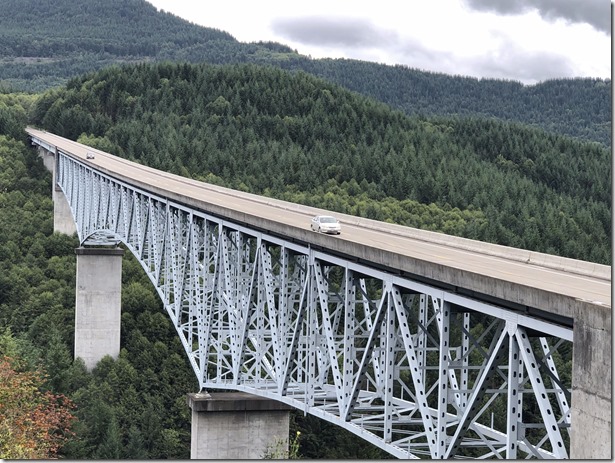 The sides of the Toutle Valley was replanted in the 80’s.  The Noble Fir on the south facing slopes and the Douglas Firs on the north facing slopes have grown tall.  They stand in startling uniformity of shape and size. 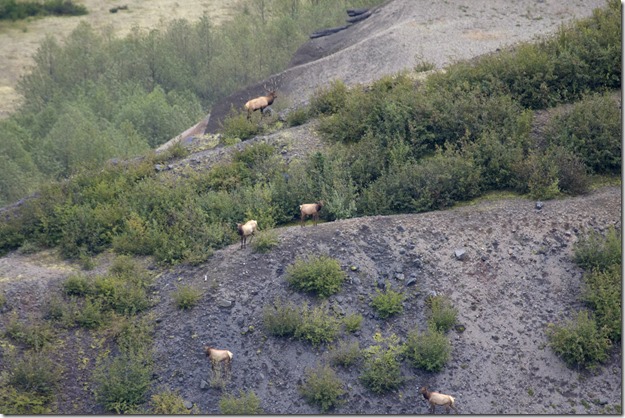 A Successful Male and some of his Harem.

At one scenic view appropriately named Elk Rock, a couple shared their binoculars to view some elk in the valley.  One, two, three, a baby nursing, a male with a huge rack, Elk kept appearing.  Clearly this was one harem.  Then atop the ridge another group strolled out of cover; another twenty or so.  Then a third harem.  There must have been close to 50 elk, two separate groups, in close proximity.  Even at this distance the male’s trumpet sounded crisp and clear; a warning to other males or a call to his girls to move? 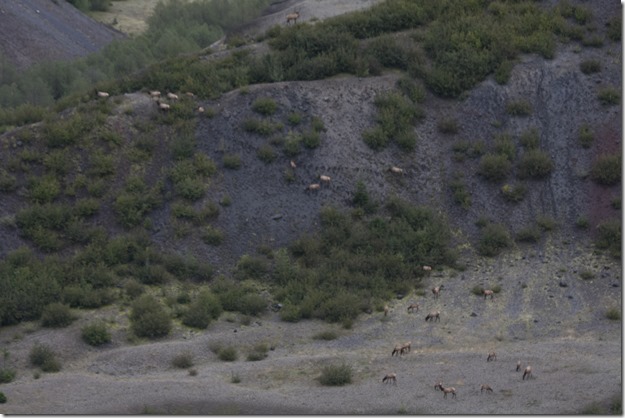 I’ve Never Seen so many Elk Together (long distance shot, no tripod) 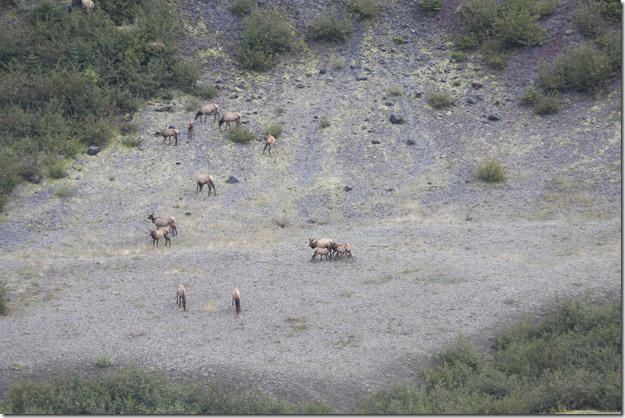 To the right of the Elk a lone blazing white mountain goat broke cover and ran across the ridge. 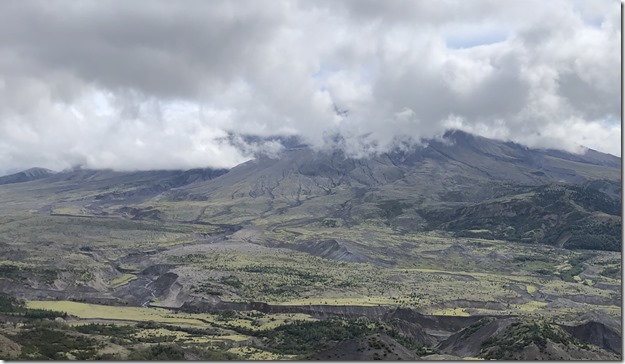 Clouds obscured Mt St Helen’s crater as shadows played across the valley.   What we could see of the mountain was desolate, barren, uninviting.   As with Mt Vesuvius, the sheer amount of material blown from the mountain top is staggering.  I’ve visited the Toutle River valley a few times and each time I feel renewed respect for the sheer power of nature and volcanoes in particular.  The extent of the devastation in the 1980’s explosion is hard to grasp without actually looking over the valley and realizing it is filled with between 30 and 60 feet of debris that extends all the way to the Columbia River and that the ash traveled hundreds of miles and blanketed regions in ash.

The drive back to Castle Rock went quickly.  We skipped the gas/restaurant/gift shop area east of I-5 and drove into the old town to walk the streets and find a bite to eat.  Castle Rock is a small town.  I was told it was lively before the eruption and that it is slowly coming back.  We walked the eight blocks of “downtown”.  Failing to find a restaurant per se, we stopped in “The Vault” a coffee shop housed in what once was a bank.  I mentioned that we had not found a place to eat.  “I’m just here getting a coffee.  You should try Wine Dog Down across the street.  I’m headed back there.  We serve pizza on flatbread, salads, and wine.  It’s good.” 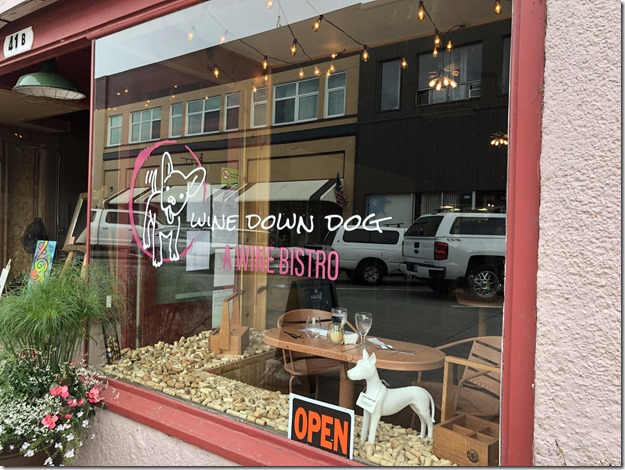 Across the street group of loud revelers sat in the Crosscut Taproom’s window.  Just next door, Wine Dog Down was welcoming and quiet.   The restaurant was nearly empty; we took the table by the window.  James brought out a menu, then launched into a description of a new pizza he is trying:  naan flatbread with olive oil, some garlic, parmesan  and mozzarella cheese, and blueberries.  I had their take on a Margherita  pizza with balsamic reduction and a glass of chardonnay.  Ellen steers clear of garlic; I thought for sure she’d share the pizza.  Truly Surprising, Ellen opted for James’ new creation. 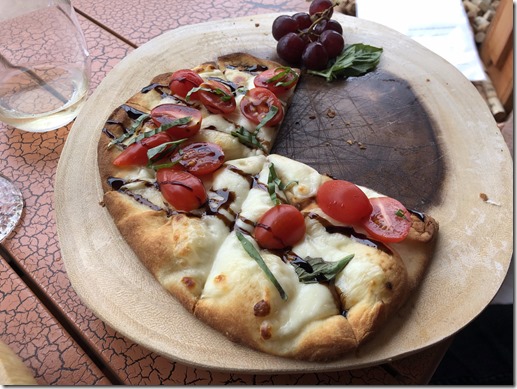 My Margherita Pizza Disappeared in a Flash

My pizza and wine was very good.  James gets his naan bread fresh daily from the bakery next door.  It sets the pizza off.  Ellen’s blueberry pizza was spectacular.  “How did you like the pizza?”  We talked for a while with James about pizza, ingredients, dough, Mt St Helens.  He said he was 8 years old when the mountain erupted.  He could see the cloud from his home between Tacoma and Seattle!  Everyone locally knows where they were the day it happened.  Castle Rock is not a culinary wasteland.  The owner of The Oasis, a bar, is planning to expand opening a restaurant next door and there are two bars and Crosscut that serve good food as well. 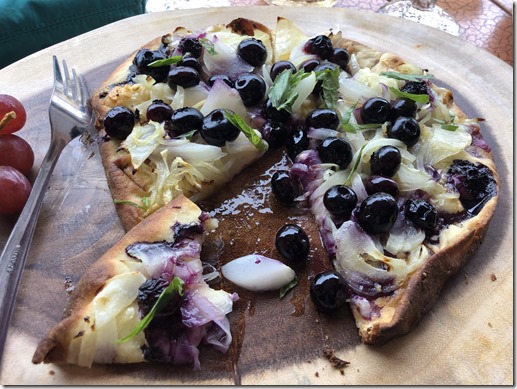 Nice that there was less shouting on Bill Maher’s show tonight.  This month’s political trope is will the democrats go centrist or go “far left”.  There is no agreement between the two sides.  The possibility of a stalemate in the democratic convention and the selection of a “safe” candidate like Amy Klobuchar could be victorious.

We took a sauna this evening; sauna in a barrel, truly.  The dry heat is relaxing even refreshing up to a point.  A cold shower to finish off = perfect.

Off to Port Angeles and the Olympic Discovery Trail. ODT is a railroad right of way that’s been converted into a bicycle path.  It is 35 miles long and runs (mostly) along the north rim of the Olympic Peninsula.  We’ll be staying at an RV Park practically on the OTD.  Weather could be an issue.  Rain is in the forecast. 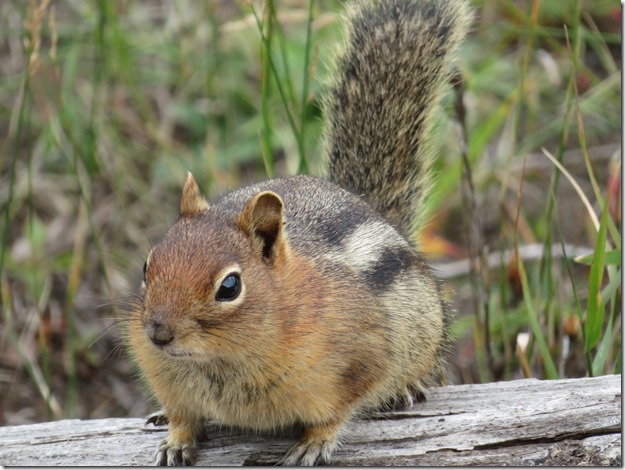 Best Photo of the Day

In retrospect today was all about Elk, Food, Good People, Barrel Sauna, and Nature’s Brute Power.  Off to the Olympic Peninsula for some cycling tomorrow.