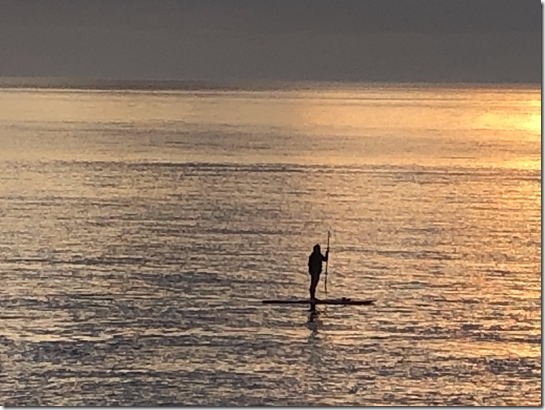 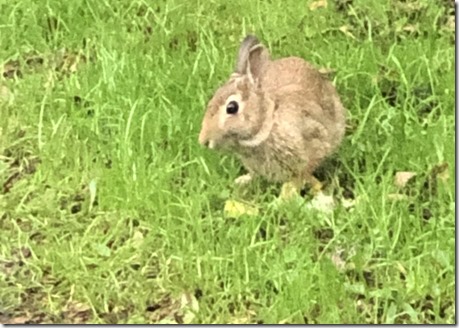 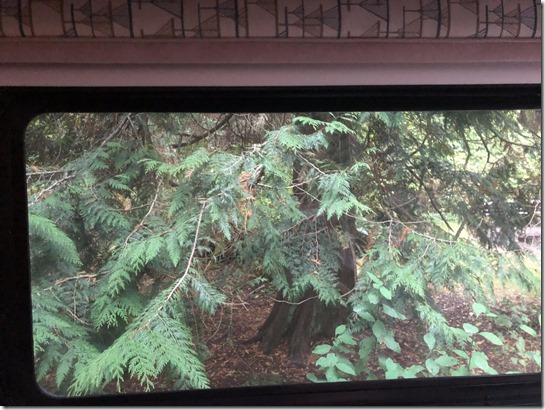 So often RV campgrounds look level, but are not.  Not only does an RV refrigerator require level within 3 degrees, but we humans do not sleep well in a slanted bed.  When we do we wake up all pressed up against one side or sliding off the bed.  We found a perfectly level site at Cranberry lake.  We slept very well and awoke well past our regular 7:10 am wake time.  It was almost 9:10 when we rolled out of bed.  Site #87 is highly recommended.  It’s close to the shower/toilet hut too.  There’s a single men’s shower and one for the women.

Jerry is travelling today, getting back this evening.  The weather is forcing us east.  It could be too late in the year to go north to Banff and Lake Louise.  It may even be too late to visit Glacier National Park.  We plan to stop at Coeur D’Alene for a few days before driving into Montana.  Today we’ll stop in Coupeville to visit the Cove Café and Michelle if she’s working today.

We should have left home a week or two earlier! I thought this same thing last year.  Ellen had scheduled a women’s get together in early September.  That kept us home until the 10th. “Next year will be different”.  I kiddingly suggested we go to Hilton Head and visit Jessie. If the weather goes cold, we could just to that. 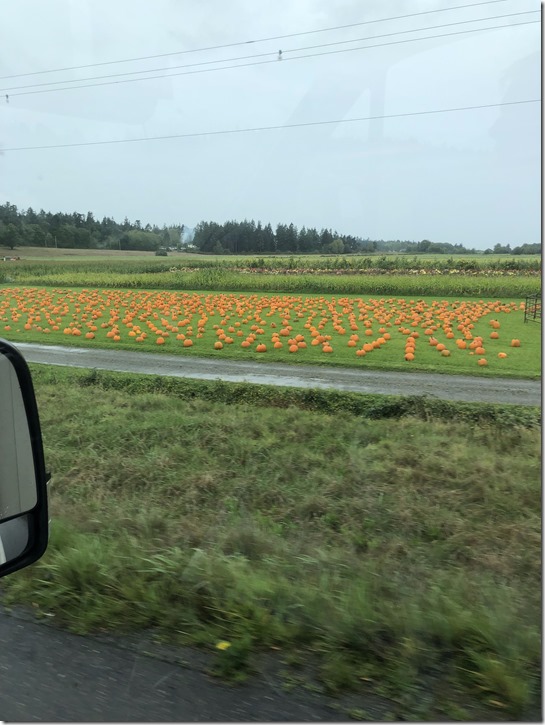 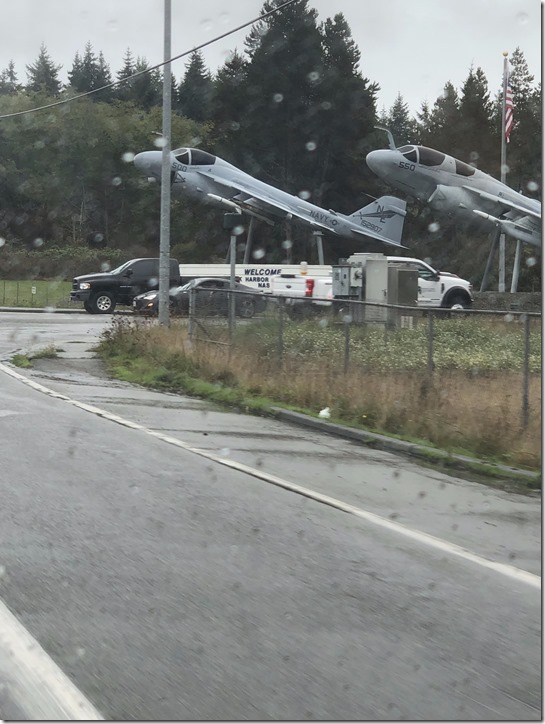 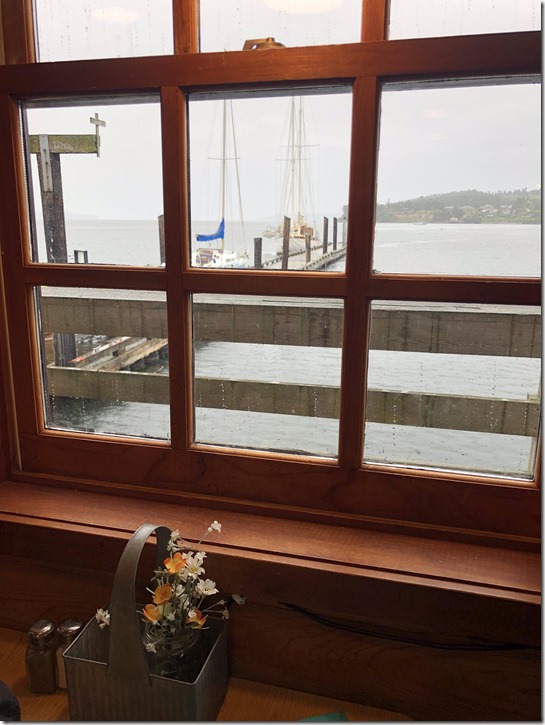 Warm and Dry inside the Cove Café 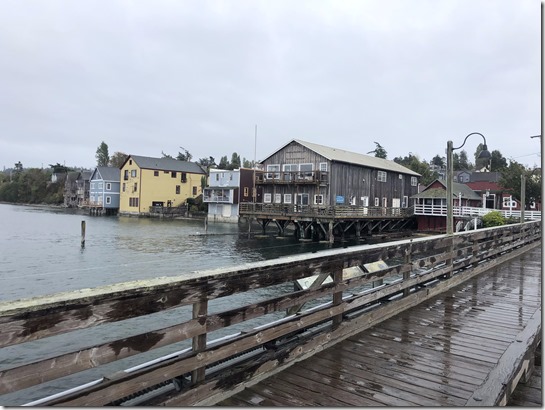 Coupeville from the Pier

The drive from Cranberry lake to Coupeville is on Rt 20, an occasionally winding road that’s in very good repair.  There was little traffic along the way.  The speed limit varies between 40 through twisties and 65 when the road straightens out.

Our usual parking lot has been paved and has marked parking places and restrooms.  Some change has come to Coupeville.  Perhaps it’s off season or maybe rain on a Monday kept people in, in any case the main street was practically empty.  I think we saw two people walking as we headed onto the pier.  The Cove Café sits at the end of the pier.  A town ordinance does not allow commercial signs on the wharf.  You wouldn’t know the Cove Café was there unless you stumbled upon it or knew ahead of time.

Michelle was not working today.  We had lunch: ellen chose the “not your usual BLT” and I chose fish and chips.  Both were very good. I was a bit surprised that the chips were a filet and not thick strips.  Two groups were eating as well.  Jerry or Michelle put lights in the windows.  The lights are visible from the road.  That’s a good start toward getting foot traffic to the café.

Ellen texted Michelle to say we were in town.  About 20 miles out of town Ellen noticed that the text had not sent.

Today’s goal was practically unreachable.  Sure I could drive into the night, but that’s not the way we like to travel.  Ellen found a KOA by a river not far off 90E that looked to have a few hundred sites.  We stopped at the Ellensburg KOA, found a site, and are settled now.  Where we stop tomorrow depends on the weather in part.  There are some great bicycle trails east of Spokane we could ride as well as some great cycling around Coeur D’Alene.

We have a comfortable flat site, #10, along the river.  We have water, electric, and local stations on cable/antenna.  Ellen cooked a chicken pot pie with some frozen peas and a kale salad.  The pot pie was ok.  Ellen remembered stopping at a place in West Yellowstone that specialized in chicken pot pies.  Now THAT pie was great.  This one was just ok, made better with peas.

Last night we had no sat-tv.  Our local HD antenna brought in 12 channels, one of which was an old movie channel.  We saw an interesting probably 50’s movie about a husband gas lighting his wife on a cruise ship before attempting to throw her overboard.  It was interesting.  Then on came “Tokyo Joe” a Bogart film.  I’d never seen it and it was good.  Google Bogart films and there’s a very long list.  We all know Casablanca and The Maltese Falcon, but Tokyo Joe or the others?  Not so much.

Entertainment tonight is pretty similar.  No directv, local on air hd channels.  Jeopardy, The Voice, now now a new attorney show.   I’ll return to reading “Moment of Truth” a bit later, but I think I know how the plot will go.  It’s never good to know the ending half way through the book.  With luck, I’ll be mistaken.

My itinerary has a number of days in Idaho, then a trip north to Lake Louise.  If the lake gets snow in this rain, we’ll reconsider.  I hope Glacier National Park stays open in the near term.