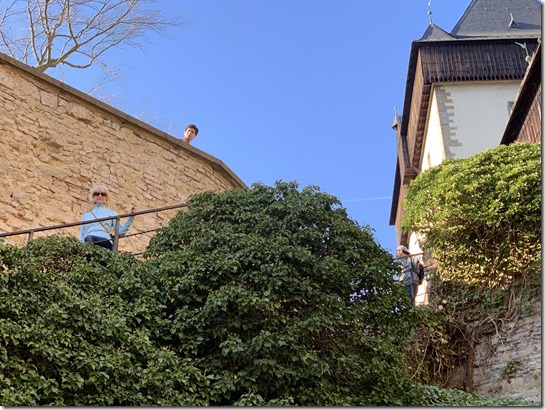 The past few days are puzzle piece memories loosely strung together.  Putting the puzzle back together was a challenge.  So on Day 3 we left the Mlyk Hotel and Veronica, its manager, to find Křivoklát, Loket, and bayreuth.  The drive to all three was mostly on small country roads that were captivating and idyllic.

A word on German road signs.  Ahead of any small town there stands a yellow sign announcing the town.  These signs serve a dual purpose: 1. you know where you are, 2. you are told to reduce your speed from warp 10 to 50 KPH.  After the first few times following a “local” at 100 KPH then suddenly (for me) braking to 50 for no apparent reason, I realized that, “Yes, there actually is a reason”.  The first series of near single lane hair-pin turns in a small town will do that.  I now understand no parking signs, “walking speed” signs which are common in areas that would “normally” be closed to traffic,  and weight and height limits going over and under bridges.  I know the speed limit on the autobahn is 120 and on most major surface roads is 100.   I know that the yellow diamond sign means you are on a priority road which means you have the right of way on that road going through small towns. Most other signs are self explanatory.

We slept well that night.  The sound of water rushing over the dam lulled us to sleep.

We found photos of a classic car rally that visited the hotel some time in the past.  The rally featured a number of impressive cars.

We walked the grounds before leaving, but failed to say tschuss to Veronica, the hotel manager.  She was consumed working with the staff getting things “just right”.  Driving out we passed the local zoo, mostly donkeys and a few mangy camels. 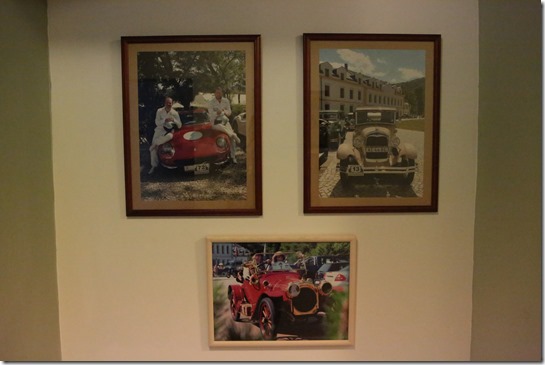 Evidence of a Car Rally at Mlyk Hotel

Driving back roads in the Czech Republic is fun.  The roads are very well maintained and well marked.  We passed wide open fields, up and down rolling hills, followed along forested streams, and passed field after field of canola.  On a Blue Danube tour, Christine mentioned that the yellow flowers planted everywhere in the Czech Republic were Canola prized for its oil.

Křivoklát is a very small town.  Without GPS, if you blink you could drive right through it.  The two outdoor restaurants anchor the town.  Aside from the restaurants, he town was practically empty.  We parked and walked up to and into the castle. 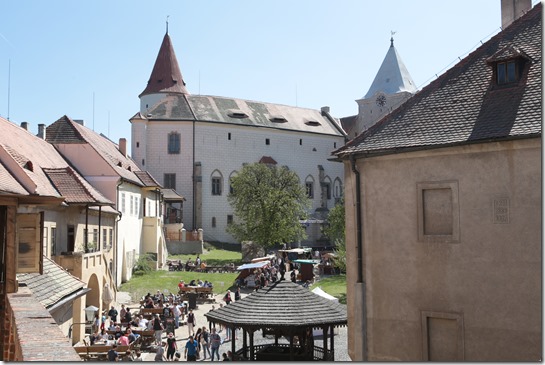 Inside the Castle Walls 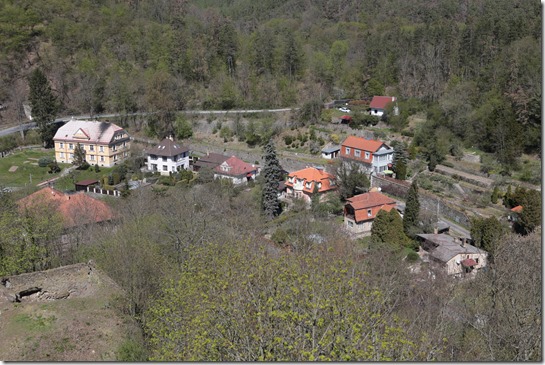 A View of Křivoklát Town from the Castle Ramparts 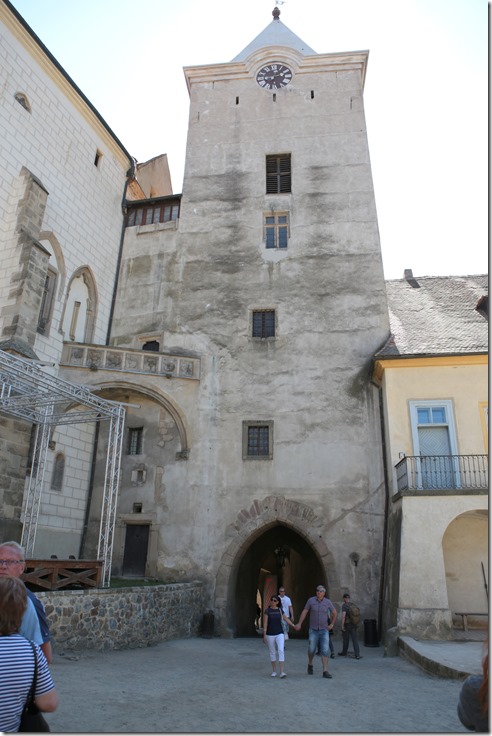 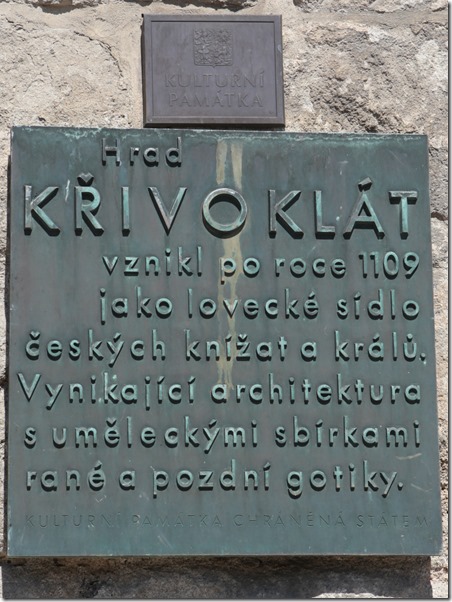 Sometime later we walked back to Křivoklát’s restaurants below.  As I mentioned in a prior post: I highly recommend the little outdoor restaurant at Křivoklát. It sits at the base of the road to the hilltop castle.  I ordered the “Veprova pecnika, bramborovy knedlik, brusinkovy terc” and the pork, cabbage, and potato dumplings were fabulous.  Also try the green beer and yes, it is green.  The beer and the cabbage were great.  We had some difficulty ordering as the menu was exclusively in Czech.  Our waitress spoke barely enough English to guide our selection. 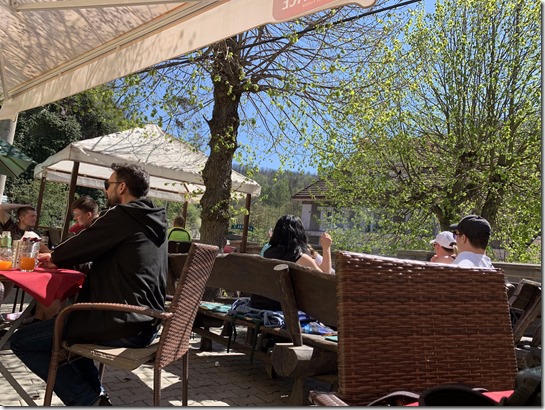 Lunch at a Restaurant, where’s Ellen in fact Where is Our Food? 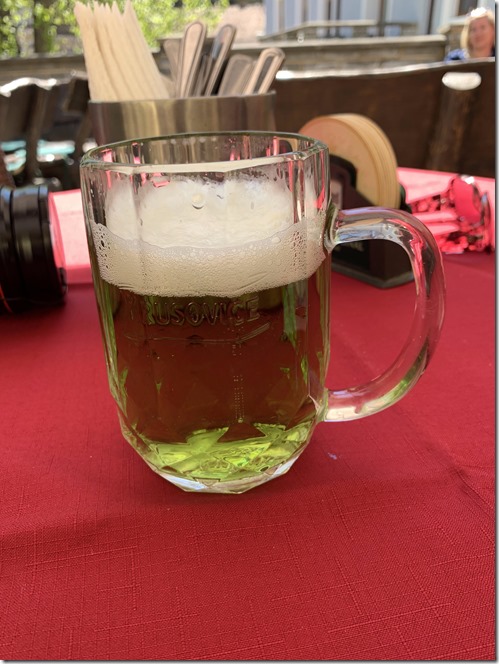 Sated, we merrily sped off on our next adventure. 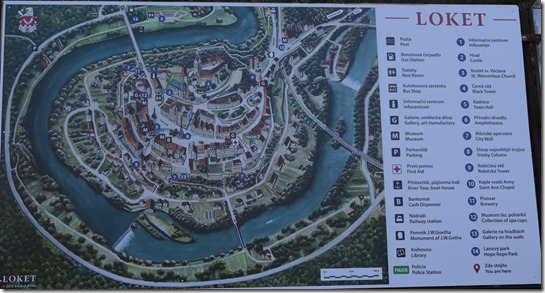 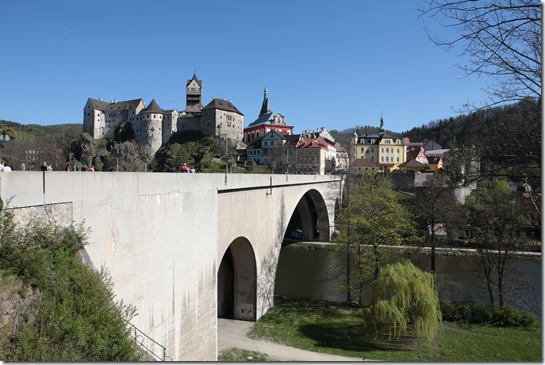 A Bridge, A Town, A Castle, welcome to Loket 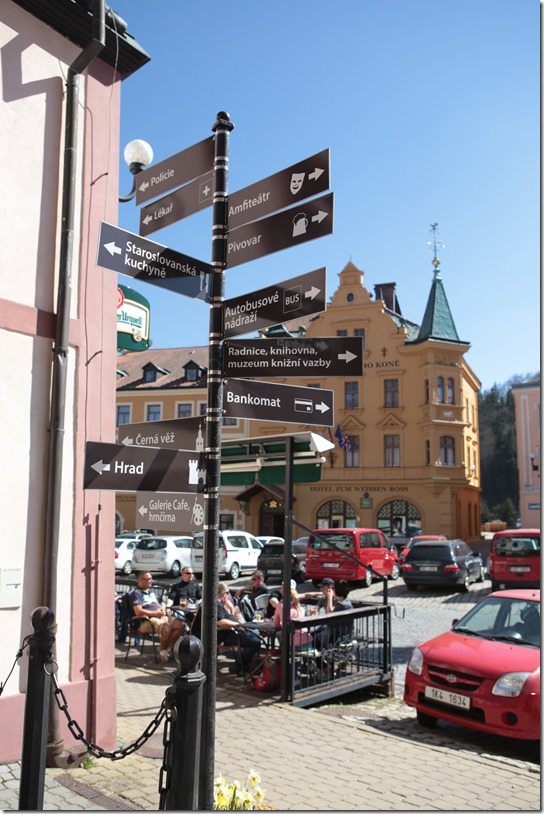 Where to Go Now?

Loket is picturesque.  A massive stone arched bridge crosses the (TBD) River opens into the Locket’s main square. On a hilltop just left of the town sits the castle keep.  The bright, colorful city defies the castle’s austerity.  Modern time wins out, we hope.

Germany celebrates Easter for an entire week.  Even so we found a spot just across the bridge.  The pay kiosk would not take my coins; we wandered the town without paying for parking.  Parking was free yesterday, perhaps that is true all week?

We walked the short series of steps to and into the castle.  “Entschuldigung, bitte” followed by a stream of unintelligible and rather irate German.  We purchased our tickets and somewhat contritely re-entered the castle.  The renovation felt “modern” to me.  Most of the armor and limited furniture was from the 19th century, or so it seemed to me.  The original wooden bridges and cat-walks, long since gone, have been replaced with massive beams and planks.  They feel “new”, leaving the castle (and me) in a state of internal conflict.  This might have been sorted out had we opted for a self-guided tour.  We simply did not have the time.  Once around the castle walls, over a high wooden bridge, and out we went.  It was fun.

Loket is a Small Castle

The Town from the Castle Ramparts 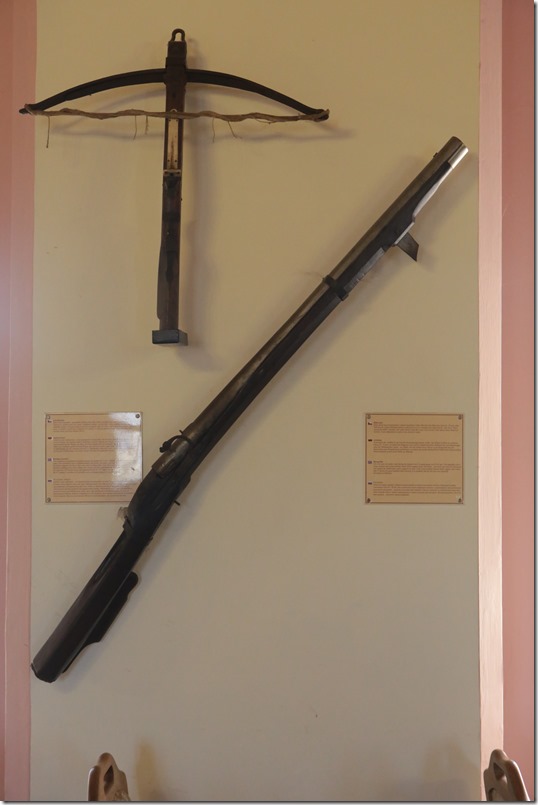 The Harquebus, a Shoulder Fired “Cannon” 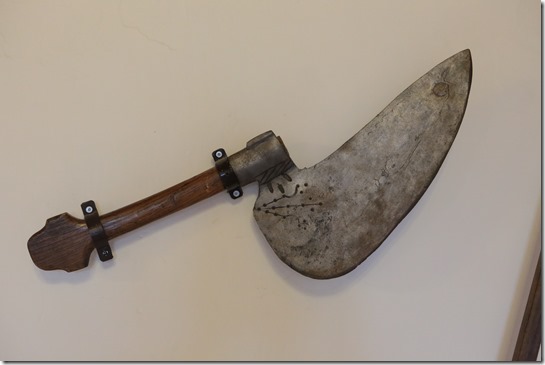 Why Take a Tour? Here’s an Example, What the heck is This?

We have found relatively few tourists while traveling the Czech countryside.  Most tourists were Czech with a smattering of Germans and Russians.

No parking ticket today!  I have no idea if parking was free, though it was for us!

Rooms in Bayreuth?  Booking.com showed a number of rooms available.  Hotel Restaurant Lohmühle struck a balance between price, accommodation, and proximity to old town.  With no need to book immediately, we headed off. 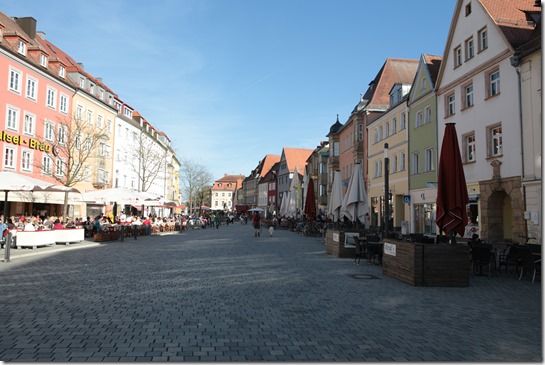 Bayreuth has a Lively Old Town 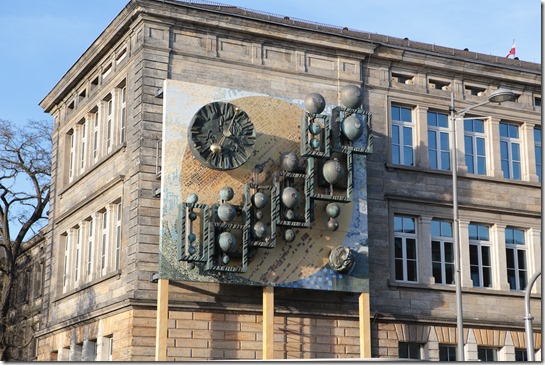 Google Maps brought us to Bayreuth without a hitch.  Most of the driving was on small 100 kph roads, with a romp on a autobahn at speeds of 120-140 kph (yes, speeding but you should see the other guys).  We arrived at 4:30 (ish), well behind our plan.

Once into city of Bayreuth, we were surprised not to find old town.  GPS announced “You Have Arrived” and I thought “No We Have Not!”.  We were at an intersection. No entry to the right, traffic ahead, so I went right into a residential area.  What?  I turned around (I’m now an adept U-turner) and headed back.  We parked and walked right into Old Town.  It was just inside that do not enter right turn where GPS had dropped us.

Bayreuth was different.  In the Czech republic, the old towns are quite small.  They do not feel bustling, or alive.  They are quaint shadows of their former selves.  Bayreuth is a vibrant town.  The new city has grown to wrap around the old town, and forced modernity on it.  It feels a bit like Rome done German style and on a diminutive scale.  The ancient structures sit astride cafes, ice shops, and markets.  An timeless open-air vegetable market sits in the center of town.  Here modern and ancient blend in harmony. 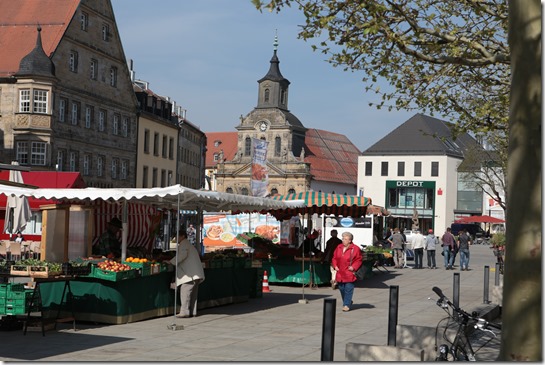 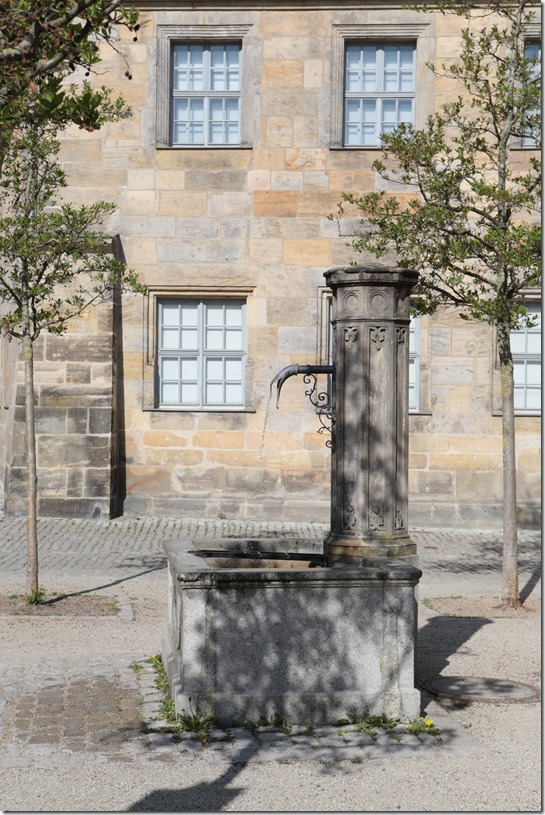 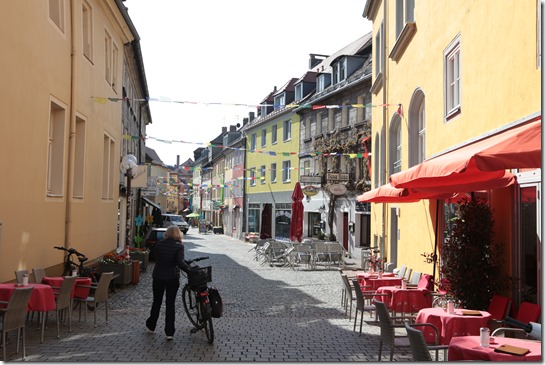 A Typical Side Street in the Morning

We walked Maximilianstraße, Bayreuth’s main street, looking for a shop to replenish our supplies with no luck.   By now it was 0: Beer: 30.  Time to relax for a moment, people watch, and sample some German Beer.  Pilsner is light, cold, and wet, but beer it is not.  A mug full of a German Lager, now that’s a beer.  Eisbar Bamberg fit the bill.

A tall young blond waitress cheerfully greeted us first in German, then in English. She has plans to visit Chicago in a few weeks.  One of her friends lives there.  She was concerned that the weather would be cold and was uncertain what to pack.  The mid-west recently had a record breaking cold front with heavy snow.  We assured her the weather should be improving. She was fun.

At the Eisbar, Ellen had a flowery herbal tea which was quite good.  I had my first locally brewed German lager beer, which was much better.

At Hotel Restaurant Lohmühle, Elizabeth, the evening concierge, greeted us and in no time we had keys to a room and a parking token.  “Use the token to exit parking.”  The parking rate was 6 euro, well below any city’s 16 euro rate.

9:10 pm arrived far too quickly. We had the car parked and our luggage in the room, but by now most restaurants were closing.  We found a pizza place that would serve us if we ordered quickly.  Our margherita pizza was acceptable, but oh the beer!

Thus far we have been very pleased with the firmness of the beds.  Each hotel has provided a firm foam mattress with a thin soft topper.  Perfect.  I cannot count the number of times I’ve had soft mattresses that nearly fold double in the US.  Perhaps that’s changing.

Lately our mantra has been, “Let’s have a light lunch”.  Bavarian cuisine consists of pork or veal smothered in a butter, plum, or wine sauce; potato or bread dumplings; and baked potato served sliced or mashed.  So, “Let’s eat a light lunch” is usually followed by a sigh and “Next time”.