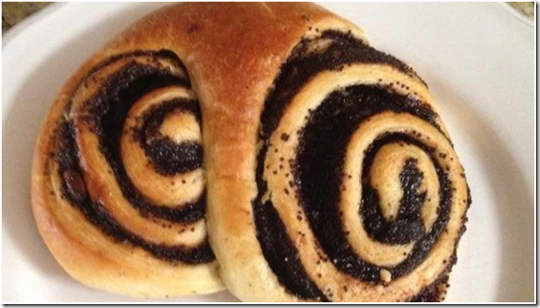 The weather this past week has been fabulous.  You can see the effect on people on the street.  They are warm and sunny.  We packed temperatures between 45 and 65, but didn’t expect mid 70’s.  Fantastic!  I hope it keeps up.

Frühstück, breakfast, was not included, which was find with us. Es ist Zeit für eine Bäckerei!
We passed a few and settled on a bakery that had an Italian espresso machine.  Real Espresso!  Most espresso served in Germany comes from a push-button machine and is just “ok”. This bakery has a superb selection of sweet things.  Ellen wanted something substantial and not sweet.  She ordered what looked to be a vegetable quiche and a cappuccino. I ordered a poppy seed snail and a cappuccino.  Mine was by far the better choice :-).

While we were enjoying our frühstück, a woman sat beside Ellen.  It wasn’t long before Ellen was in conversation with Barbara about the town of Bamberg, our travels, and Barbara’s travels.  Conversation flowed naturally.  Barbara mentioned that the best part of Bamberg is the palace atop the hill,, “just walk up-hill and you’ll see it”. 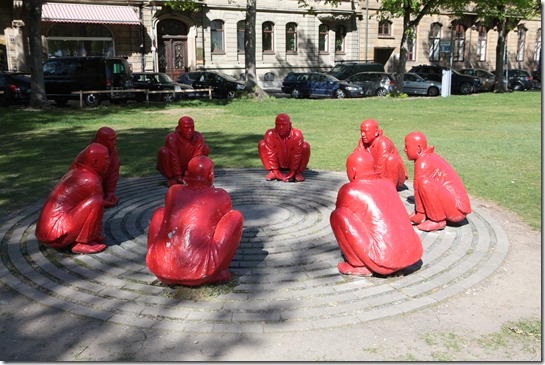 At some point Ellen wanted a glass of water,  I asked the proprietor for “eine tasse wasser, bitte”. “Hot or cold”, she asked in English.  “Heiß”, then I switched to English. I was not 100% sure I hadn’t asked for Tall Water. We sat with Barbara and chatted for twenty minutes or so.

Our plan was to walk Bamberg in the morning and drive to Rothenberg ob der Tauber.  We were to meet Markus at Glocke Weingut und Hotel, Rothenberg at 2PM.

More steps.  The walk to the palace was refreshing and over various types of cobblestone, from the well laid smooth sidewalk cobblestone, to the large uneven street ones, and everything in between. At the top we found traffic.  Not tourist foot traffic, though there was a bit of that, but road traffic.  With few exceptions, old towns in Germany can be driven at a creep. 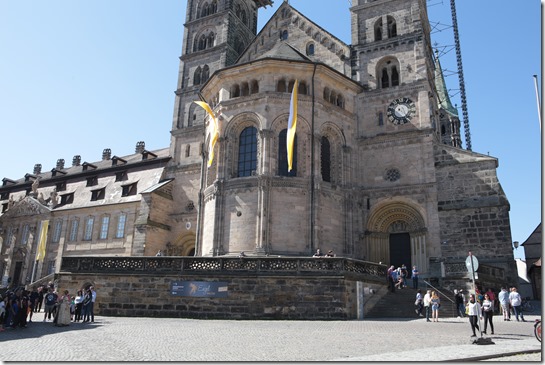 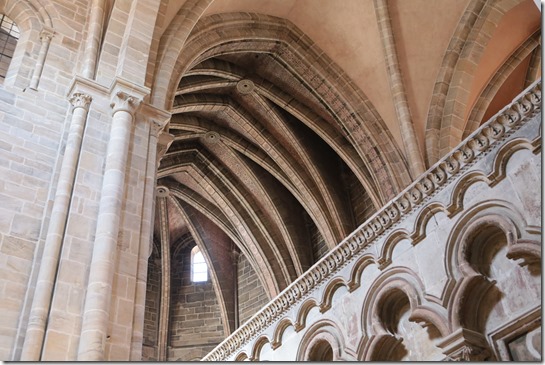 I Marvel at Cathedral’s Grand Arches 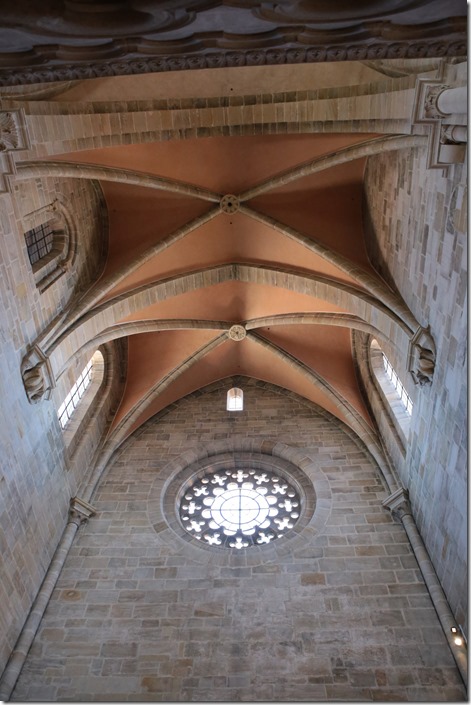 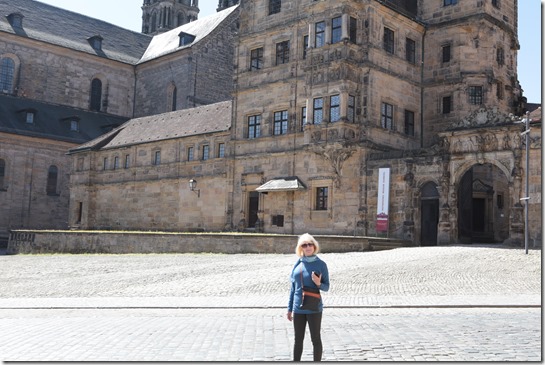 Looking South from the Footbridge, Bamberg

Looking North from the Footbridge, Bamberg

We first entered Bamberg’s Cathedral, which was impressive, took in the square, skipped the museum and the palace and headed back to our car.  Still we left around 12:15.

German autobahns are numbered A- some number.  All A routes have an implicit speed limit of 120 kph!  B- routes are the next step down.  These are typically two lane roads with one lane in each direction.  Better B- roads will have a passing lane at quite regular intervals.  The implicit speed limit on B- roads is 100 kph.  Town Signs are orange rectangles that stand road-side ahead of a town.  The speed limit within all towns is 50 kph maximum and can be lower.  Some towns have a radar speed sensor that shows your speed and a smiley for speeds below 51kph and a frown for those over.  I’ve busted a few frowns from the speed sensor.

Most roads I’ve driven have been smooth.  The single exception carried a vast number of trucks.  It was a washboard, but it was being repaired.  One crew was jackhammering sections of the road as another crew was removing debris and pouring concrete.

Germany has a great road system, if you like rotaries.

The drive to Rothenberg ob der Tauber was mostly on B- roads with a long stretch on the autobahn.  It was 1:55 as we approached Rothenberg.  The Nav app showed 5 minutes to destination.  Google maps “to the rescue”.  For whatever reason Google maps decided not to use the main gate.  It re-routed us around Rothenberg’s low land through two way streets barely wide enough for a single car.  The route was fascinating to me.  We saw an aspect of Bavaria’s countryside we would never have seen.  Ellen was less impressed.  We would be late to meet Markus.

Once through the opposite side gate, I found myself driving through throngs of people.  Most readily moved out of the say, some not so much.  We crept along.  Here Google Maps lost’s it head and began doing it’s Turn Left, Turn Right, Turn Left dance and driving us crazy.  Ignoring “the voice” and focusing on the map we managed to find Glocke Weingut und Hotel and parked on the street.  A nosy neighbor watched me chose one spot, then back up to access a larger spot.  She gave me the Bavarian version of “stink eye”.

We checked into the hotel.  “Is is ok to park on the street?”  “No.  You can park for a few minutes, but do not stay there long”.  Stink-eye would be sure about that.  Our friend had been there asking about us and was out walking the town.

This hotel is right across from that most photographed of houses.  It’s location cannot be beat. For people traveling with a car, this hotel is still better.  They charge 6 euro for parking in their private enclosed attached garage.  You can access your car anytime you want from the hotel.   On the down side, though they had web access through Telkom, it was non functional. 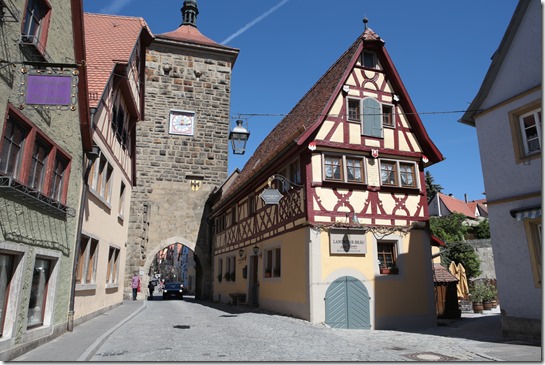 Rothenburg, NOT the classic photo 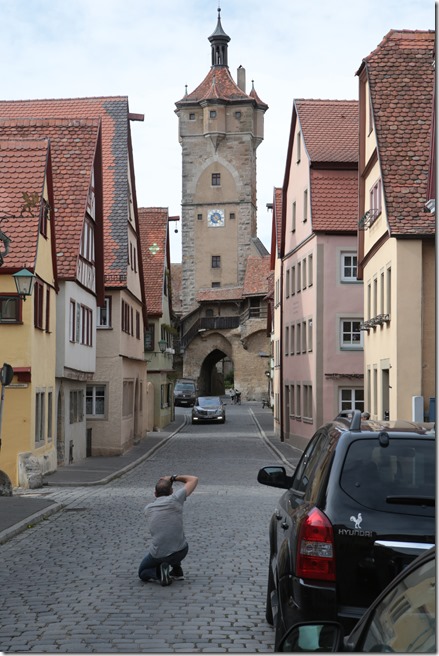 Markus at the South Gate 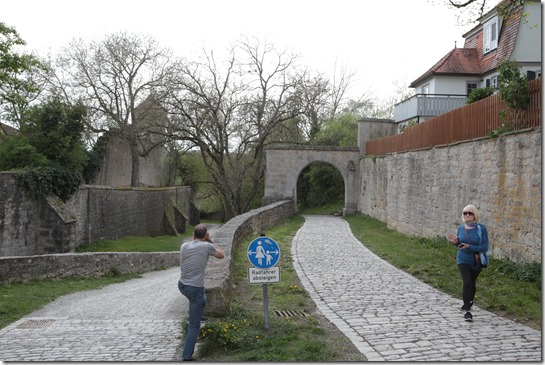 Outside the West Wall, Rothenburg

Ellen saw Markus from our room’s window and called down to him.  We haven’t seen Markus since his visit with us in Florence a few years ago.  He hasn’t changed much, if anything he’s fitter than before.  Ellen and I had skipped lunch and were hungry.  We sat at a street side restaurant on the main square and caught up.  Alex didn’t come along today; she is packing for her trip to a writer’s convention in Oslo.  “She’s concerned about meeting the Princess of Norway.  Her English is not so good and there’s only one other German going along.  She’ll have to speak English to the Princess.”  Through a series of fortuitous events, serious dedication, and ability Alex is becoming a representative of German and perhaps international writers.  The convention takes place over her birthday. Markus will fly out this Saturday to join her.

For lunch Ellen had a salad,  I had sauerbraten and Markus ordered, käsespätzle. This was the first time sauerbraten was on the menu, but what is käsespätzle?  It’s Germany’s take on mac and cheese served with caramelized or roasted onion.  I think Markus’ lunch was best of all.  “Next Time”.  After lunch?  I remember Markus and Alex scouting gelato shops for “the best” when they were in Florence.  Time for an ice cream, or ice auf Deutsch.

All three of us had never been to Rothenberg ob der Tauber.  Ice creams in hand, we walked the town. We walked the wall ramparts. Markus photography and just as Ellen and I will stop to take in a view then take a photo or two, Markus would too.  At 6 pm we started a search for a garden restaurant.  Many of Germany’s old houses were build with a central garden and many of those houses have been converted to restaurants.  Eating in a garden is so much more peaceful than eating street-side. We must have stopped at four restaurants, each of which had a garden that was closed, but directed us to another garden restaurant.  We were close to giving up when we happened upon Herrnschlösschen a restaurant with a garden.  Yes their garden seating was open.  We went in and out to the garden.

This time I ate light.  I had a salad with a few thin slices of roasted beef.  It was good.  Ellen had käsespätzle, and I’ve forgotten what Markus ate.  The food was good, though we hardly noticed.  Conversation was electric.  Suddenly a strong wind kicked up and drops of rain began to fall.  The awnings threatened to blow away.  Anything that wasn’t tied down toppled over.  The wind was intense.  We fled inside.  Moments later Markus answered a call from Alex who said there was a tremendous wind that blew through and she wondered if he was on the road and ok.  Alex was a full hour away.  Just as quickly as the squall appeared, it dissipated.  We walked Markus to his car in near darkness, passing a fellow on the main square dressed up as some kind of archaic figure dressed in black and carrying a long spear.  A small group of people were gathered around.   Strange, I thought as we walked by.

Markus has a p90, a performance model of Tesla’s Model S.  He’s quite happy with it and has no problem driving to Rothenberg and back. Markus said he was free Friday if we were anywhere close we could meet again.  Unfortunately, we’re headed south toward Füssen. much farther away.

We booked two nights in Rothenberg ob der Tauber to relax for a day before pushing on.  Ob der Tauber: funny thing about the Tauber, it is more a brook than a river. 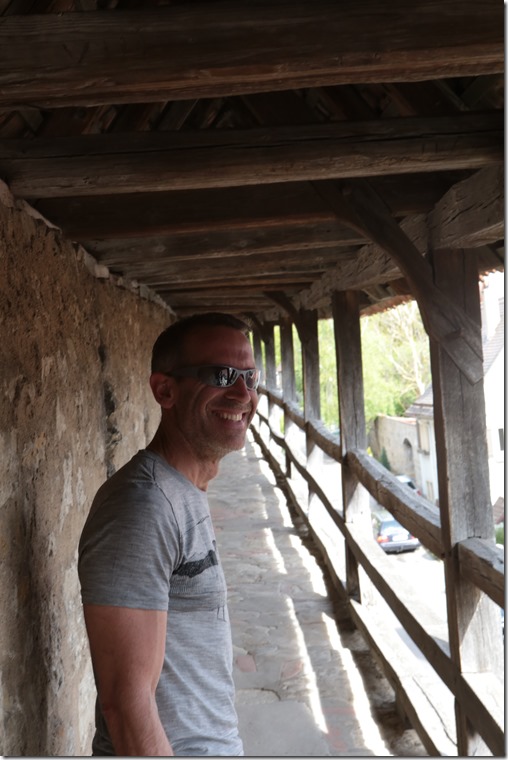 Markus on the City Ramparts, Rothenburg 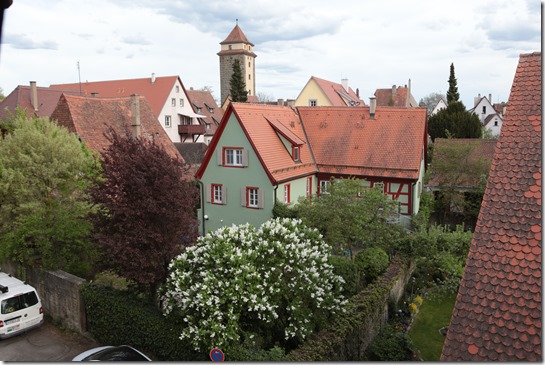 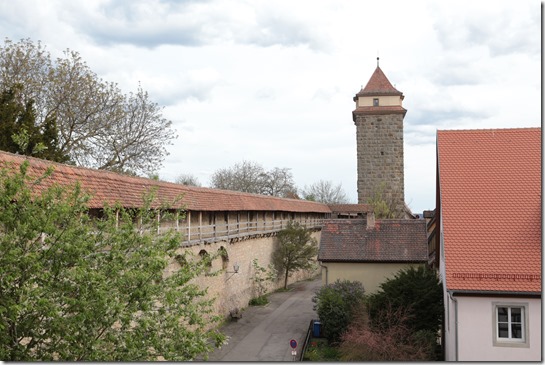 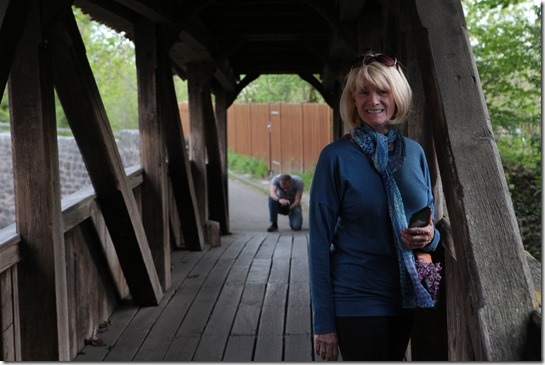 Outside The South Gate, Rothenburg 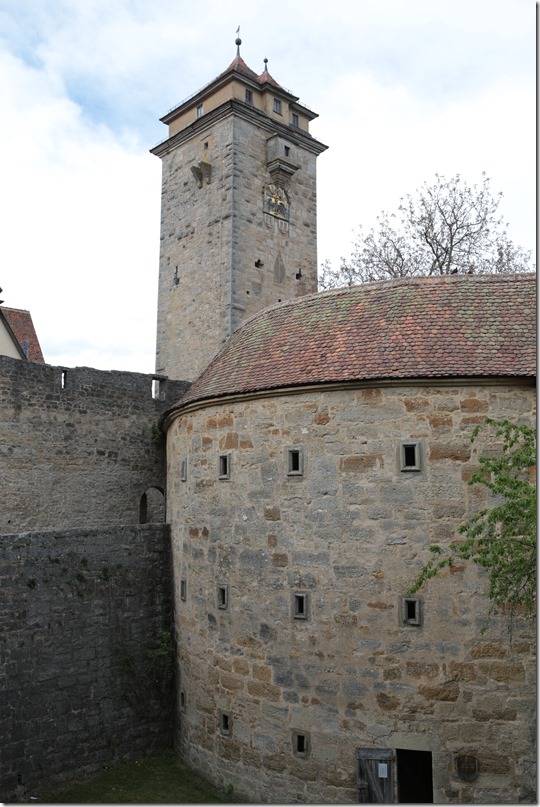 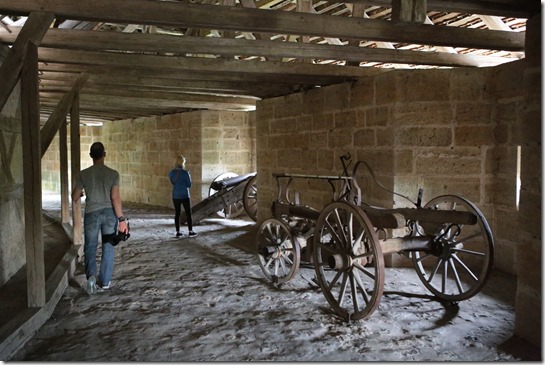 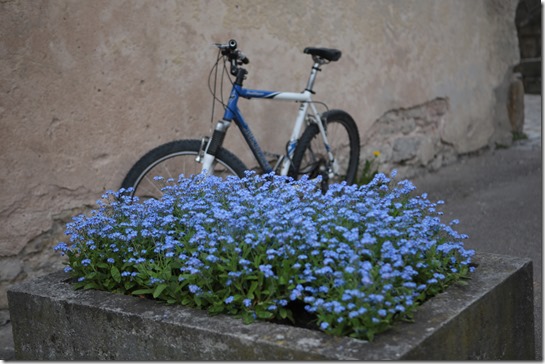 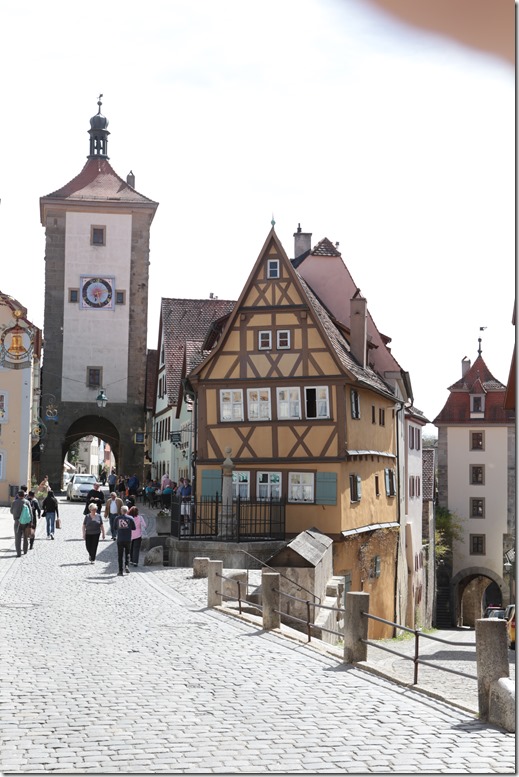 We had not seen Markus since our trip to Florence and seldom see him more than every other year.  It was a special treat for us to be visiting him in his own land.  Big Fun and something we must repeat.  Bye Markus.