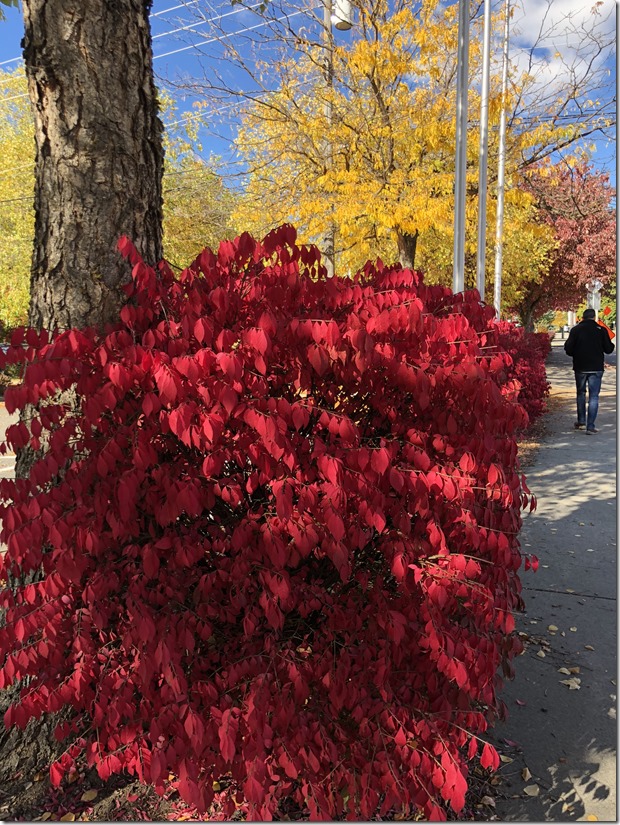 I love the peek-a-boo view of the lake through trees and scrubs from our bedside window.  The sunlight is playing on the opposite shore in brilliant golden hues.  I could stay here a few more days.  Ellen wants to go back to the town and cycle along the near town trail. I think we pick up the Centennial Trail in town.  It goes all the way to Spokane.  For now we’ll take a relaxed few hours on the trail.

I hate it when my mind dwells on things and I cannot sleep.  This is a very unusual thing for me.  I can fall asleep in a hurricane, no problem.  Last night I couldn’t get past Sumo shocks, an Apple Store to replace my iPhone, and can I recover my data. Over and Over this went through my head between 2:30 and 3:30.  It’s nuts.  I am glad the fellow View driver mentioned Sumo shocks though. I had read they make a world of difference in Li’l Beast’s handling, then simply neglected to act on it.  The fellow must have seen me swaying side to side coming into the gas station.  Good on him.

Ellen and I have had our coffee.  Ellen’s looking over the cereal’s sugar content preparing to have some breakfast.  She chose the box we bought yesterday “on sale”.  This state park is located near an American Indian Reservation.  The thing about locals near a reservation?  They’re “different”.  I don’t know why society works this way but…  the less wealthy a community, the pricier the goods and services are for those folks.  Take the local “family” market we shopped at yesterday.  Planter’s dry roasted salted peanuts that come in that plastic jar-thing was priced at $6.00.  That’s just one example.  Everything in the store looked to be priced at least $1.50 more than it should be.  I didn’t check the beer and liquor prices.  Shipping alone cannot explain this.  Plummer, the local town, is a short hop from Coeur d’Alene.  So why?  Could it be people soaking the Indians because they get federal (“our”) money and “we” want it back?  I know I’ll never get a straight answer by asking.  Yesterday in the market I had one of those WTF moments that “chaps my hide” so to speak. 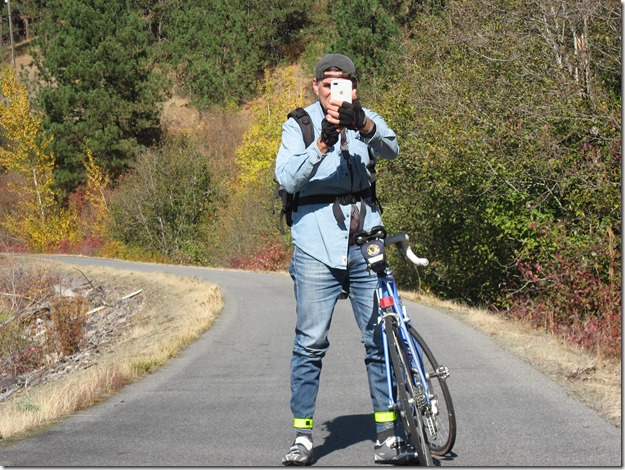 Sisters on the Fly are still here, bolstered by new arrivals.  I assume the get-together lasts through the weekend. I get the desire for women to get together without men.  We guys can be such dicks sometimes.  And that’s us being “nice” (sometimes).  I wanted to ask if a random guy could join them by the fire, but thought better of it.  I could handle “No”, I would rather not subject myself to a lecture should one arise.  It’s a bit like yesterday when through a bone-headed move while clipped in on my cycle, I took a spill.  Wham, right on my side just as a couple with cycle helmets came to a stop near by.  “Are you ok?”  “yes, my ego is bruised.  I’m fine”  Then the kicker “You should wear a helmet!  You know most head injuries are bicycle related and wearing a helmet can prevent it?”.  Then the fellow piped in supporting his wife, “It’s true, really you should.”   Funny, I’d expect the helmet Nazi’s in California, sure.  This is Idaho, you know “your own private Idaho, home of the independent mountain men and such”.  Helmet Nazis in Idaho?  The topper?  I usually do wear a helmet, but on such a glorious day and with so little bike traffic I thought “Oh,, what the heck”.

The Helmet Nazis have nothing to do with Sisters on the Fly.  In fact the sisters who l saw on the trail also were helmetless with their hair streaming in the breeze.

I cannot get this thought out of my head.  I’ll see if I can have them installed in Spokane.  I’ll call ahead today on my non-existent phone.  Have to get one of those in Coeur d’Alene if possible.  How do I retrieve my data and apps.  (my mind is still rolling this ‘round and ‘round).

It is 40 miles from Heyburn State Park to Coeur d’Alene.  The drive is over rolling hills with a few steep grades.  It’s a relaxing drive. Ellen remembered seeing an RV park in Coeur d’Alene just off HW 95.  As we approached the city, Ellen pointed out the RV Sign and I pulled into Blackwell Island RV Resort.  Matt was momentarily caught off guard when Ellen asked, “We want to know what the deal is”.  I actually blurted, “I have no idea what that means” Recovered Matt said, “Well the deal is we have RV sites that we rent and you have an RV and want to rent a site.  I think we can work something out!”  With that we all relaxed and had a great conversation about the city, biking trails, restaurants, were the most scenic stretches of the trails are, what to avoid.  Matt was a wealth of information.  “Do you know where there’s an ATT shop in the city?” “There’s one near the Costco up Government Way” and he marked the spot on a map. “It might be T-mobile  it could be ATT, I use Verizon.”  Matt mentioned a floating restaurant a few blocks away that had evening specials between 4 PM and 6 PM.

We paid for a night at the campground at a site Matt said would have good Wi-Fi.  We drove by the site to check it out (it was a pull-in/back-out), and left for the “ATT shop”.  We found the T-Mobile shop near the Costco as Matt said.  “It’s not ATT, but they will know where the ATT shop is for sure.” and they did. I did get a good natured ration of crap about not buying T-mobile and asking about ATT there and an offer of better pricing.  They were amazed at how my broken iPhone was bent into an arc.  We had a good laugh about it.

The ATT shop was beside Albertsons a few blocks back toward the city.  They too were surprised at the bent iPhone.  “Yes I sat on it when I fell off my bike and it bent into an arc.  It is totally non functional.”  The two sales guys were busy, one with a guy and Mike with a husband and wife.  The wife was asking pointed questions about pricing, deals, discounts, hidden fees. She had lots of issues.  I felt sorry for Mike.   While I was waiting another fellow walked in and because mike’s customers were waiting for their android phone to load, Mike helped this guy.  The wife grew anxious and made some snide comments about Mike helping them and not “this guy”.  Mike answered the fellow’s question and he left.  Then Mike asked if he could help me gesturing to the couple and saying their phone is loading and there’s nothing he can do for them until it completes.

Ok I explained my problem, “Could he check if I have insurance on my phone.  If I don’t I’d like to purchase a replacement.”  “Sure” then a few minutes later “You do not have insurance”  “I’ll have to purchase one then”.  At this point the wife, who was apoplectic said, “ Well go to another shop to finish this. What’s your name?”  Mike replied, “Mike” as she took her packaging and phones into her arms and walked out, husband in tow.  They didn’t have the phone I wanted, but they did have the latest phone with the memory and color I wanted. Would that be ok?  After some time getting my login and password to work (I use multiple email addresses) I got my phone.  Yay. 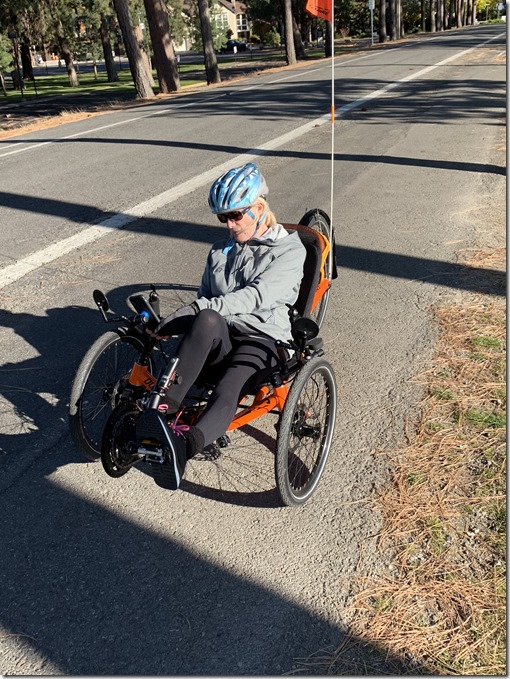 We drove off to find the Centennial Trail past the far end of town near a big parking lot.  There was a large dirt parking area that is not the parking for the Centennial trail.  That parking lot is a half mile further down Coeur d’Alene Lake Drive.

Centennial Trail is another one of Rails to Trails success stories.  That organization made the trail happen.  Support them!  I do.

The Centennial Trail from that parking log runs down a bicycle lane alongside the road (highway kind of).  Ellen was not impressed, “I thought we’d be bicycling along the lake” “We will be” I said; “I hope” I thought.  A left turn off the highway bike lane took us onto Mullin Drive, a back street.  We were still on a bike lane and still not biking along the lake.  There were Centennial Trail signs along the route.  We were on the trail, just not on the lake.

Mullin Drive ends at McEuen Park.  There Centennial Trail turns along the lake.  The ride from McEuen park along the paved path beside the lake is beautiful.

Ellen does not like sharing the road with cars.  She is happy with a paved bike path and she loved Centennial Trail once we hit the lake.  She did well cycling along the roads.  We rode out past U of Idaho, then turned back.   We stopped for a scheduled conference call (Ellen with friends).  We hoped to be back at the floating restaurant for dinner before 6 PM. Heading back the bike lane was obstructed.  We had to cycle in a traffic lane for a few hundred yards.  Ellen boogied through that section. 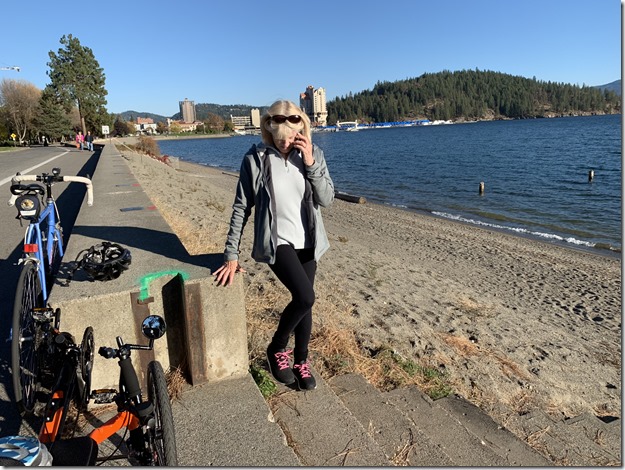 We actually did make it to Cedar, the floating restaurant and had dinner.  Our dinners were good, but not exceptional.  We both had Steak Oscar and clam chowder.  Our drive “home” was two blocks.  Our antenna is up and we’ll watch Bill Maher later this evening.

Did you notice I did not mention the weather today?  Today was sunny and 70F.  What a glorious day!

How things can change.  I was just finishing this up when we heard rain on Li’l Beast.  This was the one time I did not cover the bikes!  Oh No!  With my raincoat on I tied a makeshift tarp over both bikes.  It is secure now and I’ll have to dry the cycles off and lube the chains tomorrow.  I got soaked, but the cycles are now protected from what comes.  In retrospect I should have checked the weather rather than just assume all would be good.