It is around 19:00 and it was a warm day today, a full day. We walked home down from the Michelangelo Piazzale, changed, packed for the day, and went to our local coffee shop for a cappuccino and a doppio machiado. The cream croissants looked good this morning and we took one of those to an outside seat. The cafe was busier than usual. I don’t know if we were later getting started or if Sunday was a busier day. The cream croissant was soooo good, we shared a second one.

The idea today was to get into the Duomo, this was a priority for Ellen, and to see the Big Blue exhibit for me. Big Blue is a presentation of lapis lazuli pieces running in Florence through October. We don’t get turned around in daylight anymore. Finding our way to the Duomo was easy. On the way we found the “New York” shop which specializes in creams for men and women. Andrea, the shopkeeper, was a very personable fellow and quite easy to talk to. Ellen would up purchasing a set of creams at a 30% discount. As we talked, Andrea became more animated he began giving us samples. Six samples at first, then six, then two more. As we were about to leave we exchanged names and Andrea pulled out six more samples for Ellen for her eyes. Andrea was a joy.

We were in a hurry to the Duomo to beat the crowds, but with our stop with Andrea, that did not happen. We arrived at the piazza to find there were no lines for the Duomo. There were plenty of people milling about, but the crowd was perhaps half what I expected. We rushed over to the Firenze Card entrance and found that the Duomo was closed until 1:30. That was not good, our Firenze Cards would only be good to about 2:15ish. Still, that gave us time to walk to the lapis display near the Pitti Palace, and off we went down Via Por Santa Maria and across Ponte Vecchio toward the palace.

I distinctly remember the location of the door to the Lapis gallery, it was on the left side of Via De Guicciardini. We walked its length from Ponte Vecchio to Pitti Palace and did not find the entrance! It was closed. Ellen walked on in the sun past the palace as I headed to the shade of the palace by the main entrance. I noticed that there were two huge flags hung on either side of the entrance. One advertising the Big Blue Exhibit. I waited for Ellen to return, hoping that she would see me and that I would not have to run down the slope from the palace to the Via and catch up to her before she disappeared into a crowd.

As luck would have it Ellen was looking up at the Big Blue flag (in red) as I was searching for her. I waved my arms frantically and we were reunited. She had been looking for a ceramic shop and found nothing of interest. We asked at the gate if the Lapis display was in the palace. Yes, you can enter with your Firenze card go to the library for validation. We knew this from our Friday visit and headed to the library. At the library the ticket gal scanned our card and informed us that the card was good for one visit to a museum, we had already been through the Pitti Palace. True, we had, but we had not seen the lapis exhibit. There was no arguing with this woman, we were not getting in.

The entrance to the lapis gallery was just on the right near the exit. As we were walking by, I said to Ellen, lets just see if we can get in with what we have. We tried and we did get in.

There is no gem quite like the deep blue of lapis sometime coupled with the aggregate embed. I found the pieces displayed in the gallery fascinating in their simplicity, form, and workmanship. Many pieces were very ornate and festooned with gold. These were less to my liking. We photographed the lapis part of the exhibit, taking time with a few pieces that appealed to us, and we breezed through the remainder to get out to the Duomo. 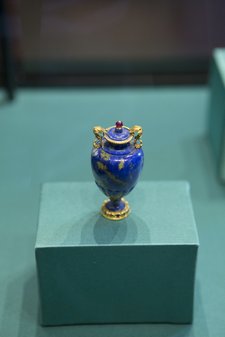 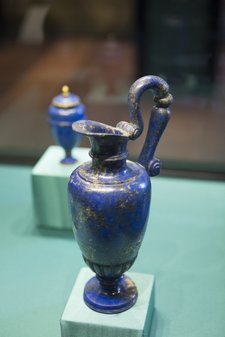 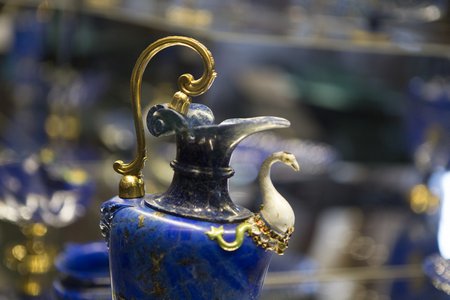 We had nearly an hours time before the Duomo opened and we were both fading. We had a quick lunch of Magherita Pizza with fresh tomato and basil, a beer, and water and were off to the Duomo. Lunch was quite good.

At the Duomo entrance we were told we had to have tickets. Go to #7 by the baptistery entrance to get tickets. OK, great. Off we trotted. It was now 13:45 and our Firenze Pass would expire soon; we had no idea when exactly, but we knew it was close. We flew around the baptistery dodging tourists in heavy heat. We continued half way around the Duomo and found nothing. Walking back toward the baptistery, we walked past a line for tickets and Ellen barged the line to enquire inside where we could use our Firenze Pass. She was not popular with the one or two hundred people in line. Again Ellen was told #7 near the baptistery, but this time “right across from the baptistery entrance” was the necessary clue. That made the difference, we found #7 and had tickets for the Duomo in hand a few moments later. Our Firenze Pass had not expired!

The ticket agent was extremely helpful, telling us to see the baptistery first as it was closing in 5 minutes, then walk to the top of the dome, then see the Duomo. Sure, we thought, but we’ll skip the walk up the stairs to the cupola and just visit the Duomo after the baptistery.

Off we went to the baptistery which was just closing. We were the last two people admitted today. The baptistery was cold and dark, a welcome change from the heat outside. We’ve taken a few pictures of the baptistery. 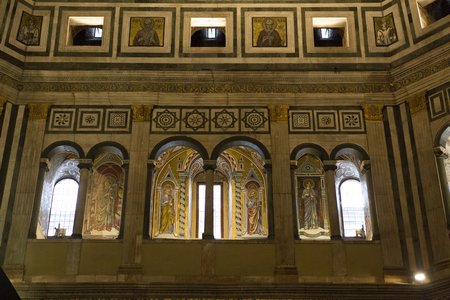 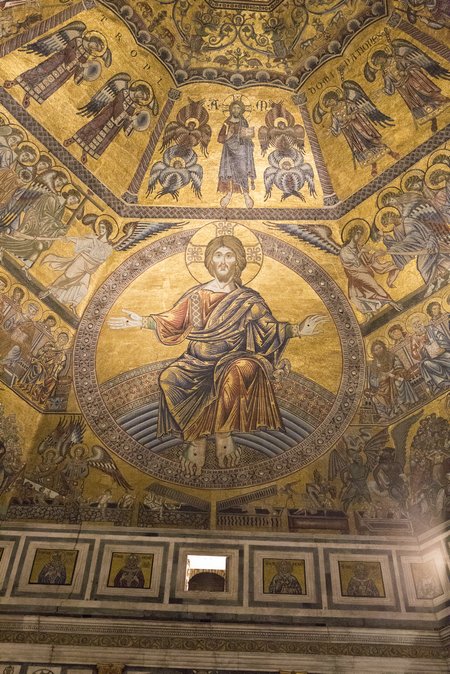 We exited and headed to the Duomo entrance. There was an extremely long line to get in, but the priority and Firenze Pass line was empty and we walked right in, skipping the line. We never waited in line for any museum in Florence. Our Pass got us in past the hoards of tourists outside. It was no help with the hoards inside, but that can be avoided by going early or late. In this case we went late mid-day. Not the best planning.

Once inside the Duomo, we followed the couple ahead of us into a narrow corridor and up a flight of stairs for a few steps then stopped. The flight of stairs was maybe a meter wide at this point and the line ahead of us was moving two or three steps then waiting for half a minute then moving up eight steps and waiting. Weird, I thought. Ellen immediately knew we were not going into the Duomo, but going up to the cupola. The steps narrowed and grew steeper, and the temperature in the stairway grew as we rose higher. After about twenty minutes, the stairs opened onto a walkway around the base of the cupola, very high above the floor of the Duomo. This was awesome. As we walked the semi-circular catwalk we took photos of the dome now not so high above us. The walkway led into another narrow corridor that led to a steep spiral stairway going straight up. Again the line moved a few steps at a time. Eventually the stairway leveled out as we met groups descending. It was quite tight in the corridor and on the stairs. In some places two people could not pass each other. The corridor let to very steep stairways going up at maybe 50 degrees that went on forever, but opened onto a landing at the very top of the Duomo dome. This was still more awesome. As we exited the stairway, I asked an attendant how many stairs there were getting to the top. 463 or 464 is what she told me. 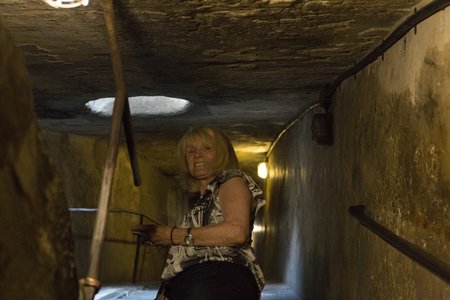 The view from the top of the cupola was a treat. 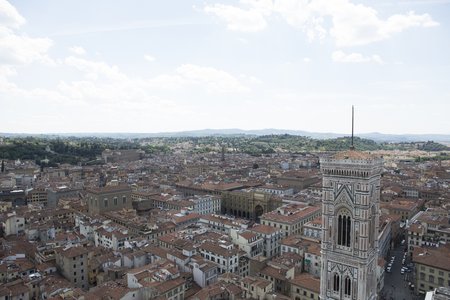 We spent quite some time soaking in the view and enjoying a breeze. Going down was much quicker. At the bottom we searched for the Red Firenze Pass entry marker for the Duomo and not seeing one asked an attendant who said, there is no Firenze Pass, the Duomo is a church with access for all. We took one look at the line that was hundreds of people long and chose to skip the ground floor view. We had been IN the Duomo, just not at ground level.

We headed off to find luggage to replace my carry on that is heavy and getting old. We may bring all four pieces back with us and not jettison my carry on. We’ll know later. We found a few luggage shops from very high end to reasonable (read cheap). By now thought of food and wine were paramount. We stopped at a restaurant adjoining a hotel and had another remarkable meal. Antipasti, ravioli with butter and basil, osso buco a la Florentine, water, and a glass of Chianti Classico. Our waiter was a fun loving guy who sang to the ladies and joked with the men. He charged Ellen’s Iphone for us while we ate.

After our very early dinner, we headed back to the inexpensive luggage shop to buy a medium sized hard shell case and headed home for a siesta. We decided to close out the day by watching the sun set from Piazzale Michelangelo and hiked up the stairs to the overlook. It was much easier going up in the morning than it was now; the heat and our exhaustion from the day’s earlier climb had the better of us. Still we enjoyed our last sunset in Florence, a walk back down to the San Niccolo tower, and a gelato at a neighborhood shop.

We’re relaxing ahead of packing to head home. I called a taxi to pick us up tomorrow, but they will not take reservations from people who do not have a local phone number. It would be rude to leave Alexandra’s number so I’ll call a bit ahead of time tomorrow. We’ll leave well enough ahead of time to avoid having to stay another day. Already we are formulating plans to come back to Tuscany for two months in the fall of 2016. Our fall and springs are “booked” until then.

We’ve asked ourselves which part of the past month of travel we loved best and we cannot come up with an answer. There were so many wonderful days in very unusual places that each one stands on its own merit. As for picking a photo to sum up our retirement trip, something I had hoped to be able to do. It is impossible.

We will review this trip in detail on the travel forum when we get home and have time to digest the details of which restaurant, which Island, and the how, what, and when of things.