We arrived very late.  There was a welcome packet taped to the door; Ellen called ahead.  The office here closes at 9 pm.   Our site was right at the entrance and we drove right in.  This is a small campground.  We were lucky to get a site.   We were late getting up and leaving and did not take much time to walk the campground.  We’ve been spoiled by Normandy Farms, few campgrounds will compare.

We spent too much time catching up on our blog and left the campground quite late for our drive to Fort Mercer and Valley Forge.  Further the weather was not cooperating.  It had rained overnight and was windy, overcast, and raining off and on.  At least it was warm.

There are very few campgrounds open at this time of year, fewer still anywhere near the site of Fort Mercer.  I first learned of the role Fort Mercer played in the War of Independence through Tara Ross’s daily history lesson on facebook: taraRoss.  Forts Miffin and Mercer effectively blockaded the Delaware River preventing the British from reinforcing Philadelphia and attacking Valley Forge where the Revolutionary Army wintered December 1777 to June 1778.  The two forts prevented what could have been the annihilation of George Washington’s army. 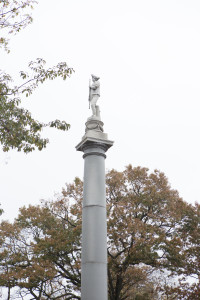 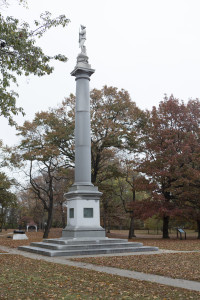 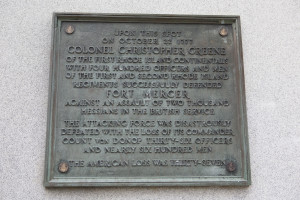 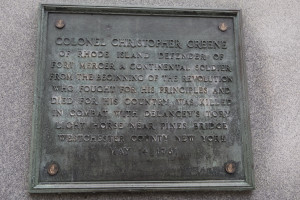 The Monument to Colonel Christopher Green 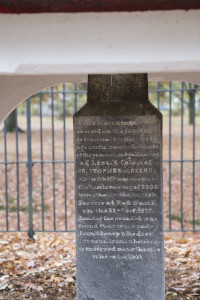 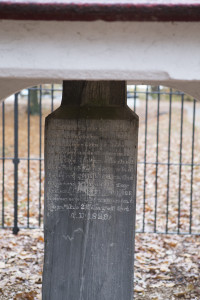 One Very Old Monument, I have not yet deciphered this. 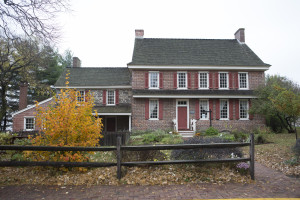 It was fascinating visiting the site of the Fort Mercer.   Unfortunately the James and Ann Whitall house was closed.  We did find a door open.  Being inquisitive we considered going inside, but thought it best not to.  Moments later, Rachael popped out to say “Hi” and wonder what we were up to.  She was working there.  “There are no tours today and the house is closed to the public, but there are candlelight tours on the weekend if you’ll be around then.”  She was very lucky to have this house and location to work. 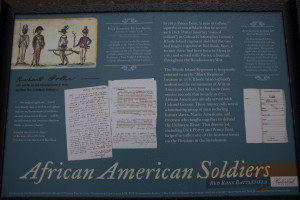 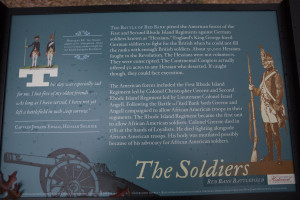 A Tribute to the Revolutionaries Who Fought Here

Fort Miffin, across the Delaware River, is closed Mondays and Tuesdays.

Some links about Fort Mercer:    Fort Mercer     The Battle of Red Bank

The drive to Valley Forge took us right through Philadelphia.  Driving freeways we did not go through downtown city traffic, but the traffic on the freeway was very bad heading out of the city and worse going in.  It was a significant delay leaving us a little over and hour to tour Valley Forge before the park closed.  Valley Forge is huge.  The is a natural hill flanked by a valley on either side and the Valley Creek River winding alongside..  The stone house, the Issac Potts’ house, that George Washington rented while overwintering is intact and mostly original.  The hall floor has seen so many visitors it has been replaced and the bedrooms are gated off. Pott’s had two houses, the one he rented and his house further down the valley near the site of a mill and forge that were destroyed by a British expeditionary force long before the Continental Army arrived.  The British never threatened the army during the winter, largely due to Forts Mercer and Miffin.

George Washington’s house was open when we arrived, but Pott’s house was closed.  The houses are set in a beautiful valley that must be stunning in early fall.

At the visitor center I asked how many troops wintered here.  A docent said, “between six and ten thousand, but most of them were ill and not fit to fight.  By the end of the winter that number grew to twenty thousand.  George Washington wanted his men housed and established a contest for the fastest and best build cabin for the men. What surprised me, there was an inoculation for small pox that was administered to his men in 1777

The “Today Show” features Al Roker on a road trip touring 48 states in a Winnebago View!  I’m watching Al driving his View as I’m writing this.  He’s loving his “Views” as he calls it. There are four people on the tour.  His is not a J model, like ours, and it’s a 2016.  Our View is old now?