The expedition folks kept us very busy. Yesterday we were so tired with 3 hours sleep, we almost skipped the evening walk (our first experience off ship). We did go but were not impressed with our guide Pato’s knowledge of the area. He was “ok”. Ellen bonked her head on a low lying branch on the way back. A number of people heard the bonk. She was ok if stunned.

We had dinner with the Istanbul group and a close knit Park City group and an interesting conversation about visiting Istanbul. The recent bombing was mentioned.

In the evening, the Islander moved to Espanola Island. We skipped the early morning (6am) kayaking group, opting to sleep in a bit and have breakfast. In orientation briefing after breakfast, Carlos was hilarious and informative. Our first snorkeling adventure was up next. We brought our own equipment and did not have to “gear up” on the top deck. Though I did go up to get a ditty bag for our “stuff”. With 30+ people scrambling for equipment it was a bit of a zoo, though Carlos had it under control. The NatGeo/Lindblad equipment is quite good though we do prefer our own familiar suites, masks, and fins. Though with new “Miami” suites we were not sure how things would go.

We boarded Zodiacs for a short trip to the snorkel spot. Three zodiacs carried 16 people each. With mask and fins on, we hit the water. Me with a back flip, Ellen more gingerly. For the first time ever, Ellen had no equipment issue! No water in the mask, no snorkel filling with water, no “the water’s cold”, nothing!! The trick was a bit of vaciline along her hair line. I can’t say the same for me, I set the mask too loose and had a minor water fill issue. That turned out OK as I could slosh the water around the mask to clear any fog.

The snorkeling started with a deep water entry and a short snorlek look-see to a lava rock wall that was great. We drifted/swam along the rock wall in between 15 and 30 feet of water and watched colorful tropic fish swim about, some singly or in pairs, others in schools. I chose not to take a camera the first time out. It would only be in the way if we had equipment issues. I enjoyed bobbing around with Ellen for an hour. We pointed interesting fish out to eachother. An hour went by far too quickly. Our zodiac, #3, picked us up and back to the boat we went to dropp off our gear and head back to a white sandy beach. This was the most idylic strech of power white sand I have ever experienced. Again I did not take a camera, but wanted to see what a “wet landing” was like before hazarding our equiplent. As with everything on this expedition, the wet landing was no problem. Carlos overstates the difficulty of each event to be sure people prepare accordingly. It is a safe thing to do when dealing with people of vastly differing capabilities.

Ellen and I stripped to our suites and swam from the beach. This was big fun.

Back aboard we took a quick shower with plenty of hot water and had an Ecuadorian feast for lunch. I had a discussion with Michael Fleisher about the blues origins in the 30’s and 40’s and its influence on the 50’s and 60’s blues-rock.

I headed to the breezy top deck and got in a very animated discussion about life with a New York Psychiatrist. We touched on politics, but mostly talked about the human condition as it relates to us both. Suddenly Ellen appeared. She had been searching for me. We were leaving for a long rock-hopping walk in 3 minutes. I had to scramblel to make it and forgetting to grab my life preserver to board the zodiac, almost didn’t.

This walk was the first time we saw just how much birdlife exists on Espanola. There were shorebirds and sea birds in abundance with a cacophony of bird calls. This was the beginning of mating season. We saw many Nasca Boobies with their gray webbed feet. A Galapagos Hawk sitting on a rock among hundreds of nesting boobies, Galapagos Mockingbirds who were quite inquisitive and bounced right up to us and hopped between our feet. There were many marine iguanas and lava lizards that looked well fed. There were many sea lions on the rocks and in the water catching dinner. We saw a lone sitting waved albatross, a male. The male albatross arrive first on the islands followed a bit later by the females. We were too early to this island to see the albatross mating dance.

A Galapagos Dove and Lava Lizard 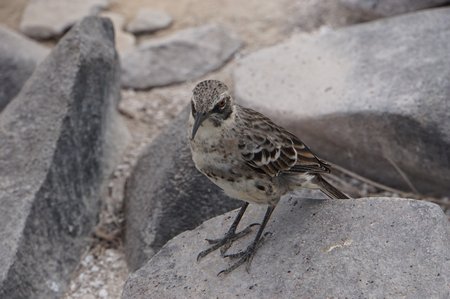 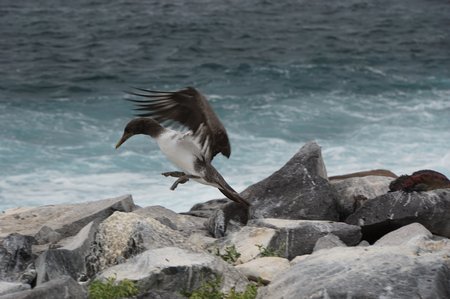 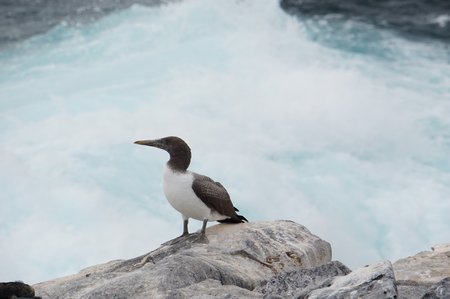 One Juvenile Head On 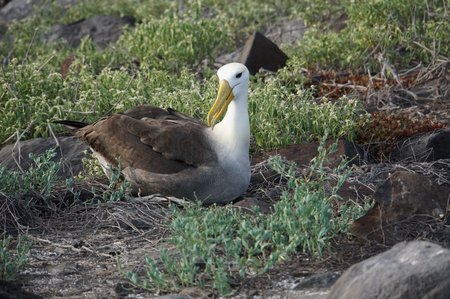 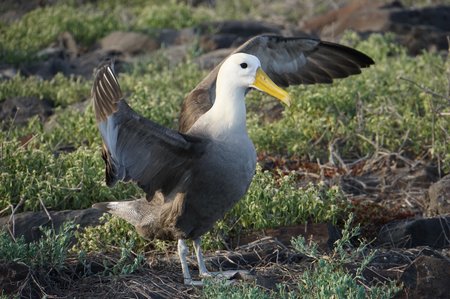 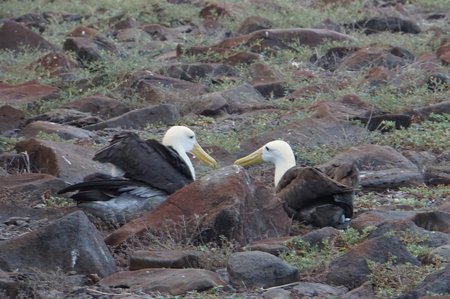 This fascinating walk took us to dusk. As we headed back on the walking loop toward the Islander, we found a pair of waved albatross going through their mating dance/ritual. We stopped to watch for a while then back to the zodiacs and the Islander for dinner. I have no notes on dinner that evening. We were bushed and wanted to eat and head right to sleep.

The island has no fresh water supply and is uninhabited. It is fascinating that life on Espanola find enough water to survive. I’ll explain how a bit later. I’ll also post video of the albatross mating ritual, what we have of it.

Here is the “Daily Expedition Report” for the Islander for 4/11/16:

Today the Galapagos exploration brought us to the southernmost island in the archipelago, Española. Several activities were going to comprise our expedition today and deep water snorkeling was going to give us a good experience by exploring the Galapagos Marine Reserve. Once we entered the underwater world of Gardner Islet, a marvelous sanctuary of fish was revealed to us. Lava rocks decorated with a variety of invertebrates, playful Galapagos sea lions, and reef fish of different species were part of the attractions that were seen.

As soon as snorkeling was over it was time to enjoy the sandy area found at Gardner Bay beach. A combination of white organic sand along with dozens of Galapagos sea lions were the perfect combination to inspire us. The curious Hood mockingbirds were the ideal companions for this marvelous occasion. As soon as the last Zodiac returned from the beach, we pulled anchor in order to take us to the next destination, Punta Suarez.

The afternoon activities were going to be set in a unique environment that only Española Island could provide. A comfortable dry landing was going to be the best way to begin our journey. Since the very beginning, surprises of different kinds astonished us as we explored the area. Colorful marine iguanas on the lava rocks greeted us on our hike as we approached the rocky area. When the Hood mockingbirds approached us without any fear, it reminded us that we were in a very special place, but the presence of juvenile Galapagos sea lions in the tidal pools was one of the most remarkable things to see.

Once we reached the farthest point of the trail we enjoyed seeing different kinds of sea birds. Nazca boobies were all over the cliff area, swallow-tailed gulls flew around us, and the glorious Waved albatross made us realize we were visiting a seabird’s paradise. A colorful sunset was the perfect ending to our expedition today, but we knew that our Galapagos exploration continues tomorrow.