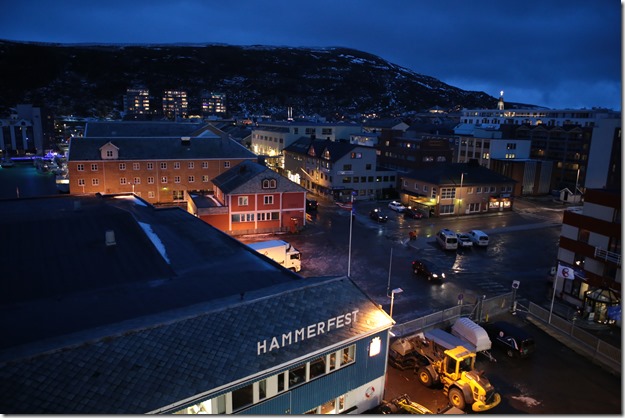 We lingered aboard ship sipping a Chococcino from the Viking Café before braving the wind on deck 9.  The wind was fierce, but dry.  The rain had stopped.  Encouraged, we headed off ship to a gift shop a scant hundred meters away.  The gift shop was also a small museum with a set of taxidermied stuff animals.  I do not support the idea of killing and immortalizing a dead animal.  There were seals, a red and gray fox, a lynx, a polar bear,, a sea eagle, and a wolverine.   We snapped a few photos and scurried back aboard a few minutes ahead of departure. 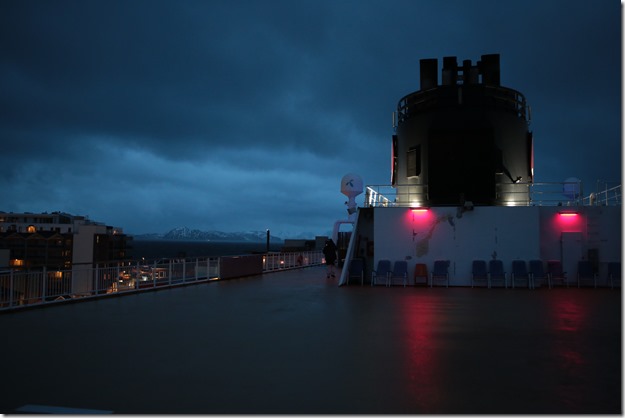 The path to the Hilltop Overlook was Closed due to Ice. 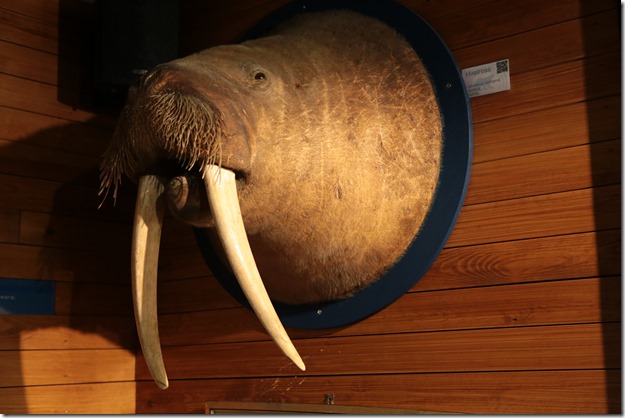 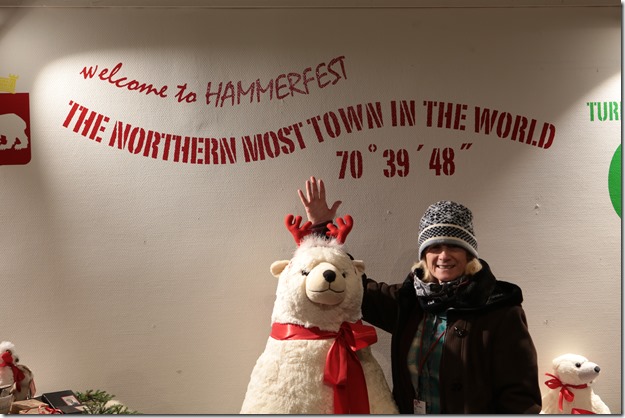 This evening’s lecture was about solar eclipses.  John has seen 18 full eclipses.  He travels around the world to experience the umbra.  He was in a field on Snake Ranch with the Teton Range in the background for the August 2017 solar eclipse.  Ellen and I were in Independence Oregon.  Both locations experienced the umbra, or total eclipse of the sun by the moon.

John quoted a French astrophysicist who answered the question, “What is the difference between experiencing 99% and a total eclipse”.  His answer, “It is like the difference between a peck on the cheek and an entire night of passionate lovemaking!”  We were floored by the changes we experienced during the total eclipse in 2017. The way a wind came out of nowhere as totality started and the eerie light.  We overheard many people who were at 99% totality who wondered what the big deal was.  At 99% there is enough light for our eyes to compensate and we see little difference. The day does not become night.  In the umbra, the day does go to twilight and is unmistakably dark.

John also described how important it is to know ahead of time what to expect.  He was seated with a group in the desert of Saudi Arabia (I think it was Saudi Arabia) waiting for Venus transit the sun.  His group turned on BBC news to watch the news transfer to a group in the desert awaiting Venus’ transit of the sun.  The looked around and saw the news team atop a building not far away.  Great.  As Venus appeared against the sun, his group let out cheers and shouts.  Nothing from the BBC.  Apparently the BBC team could hear the shouting.  John said his team watched as the BBC team’s camera panned up and down the sun and settled in on Venus in its transit across the lower part of the orb.  They had trained their telescope & camera at the top.

Listening to John talk brought our experience of 2017’s solar eclipse to mind.  We considered not driving to totality and “settling” for 99%.  We are so glad we persevered.

John is a remarkable speaker with a depth of astronomical knowledge that he enjoys sharing.  It is truly fun being on this cruise with him and Inge.

As John closed out his presentation he mentioned that humpbacks and orca have been sighted in the fjord between Oksfjord, our next stop, and Skjervoy.  It has been very windy. We are warned that we may not be able to open the doors to the deck on the windward side of the ship.  Go out the leeward side and be careful rounding the ship to the windward side.  This part of the cruise is open to the North Sea and can be very rough.   It is 16:10, we have just departed Oksfjord, and it is quite dark outside. Transit time to Skjervoy is 3:15.  We might be able to sight  whales in the dim light cast by the ship. Skies are expected to open somewhat this evening making another Northern Lights sighting possible.

Seeing whales or the northern lights would be great.  We’ll brave the elements.  The outdoor Jacuzzi awaits as well.