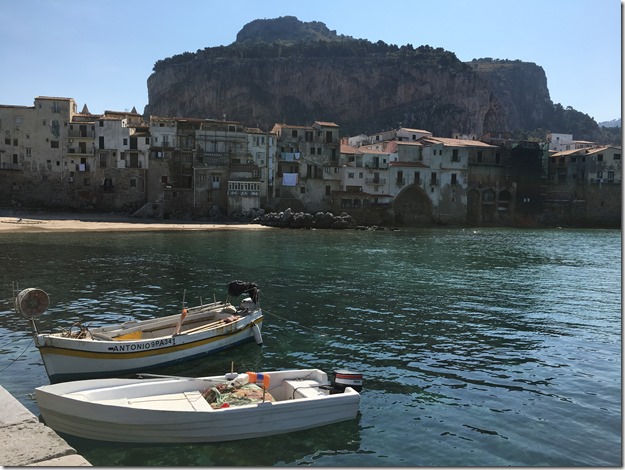 Cefalu, The Rock, the Town, the Bay

Jetlag is finito. Now if only my cold would “poof” and be gone. 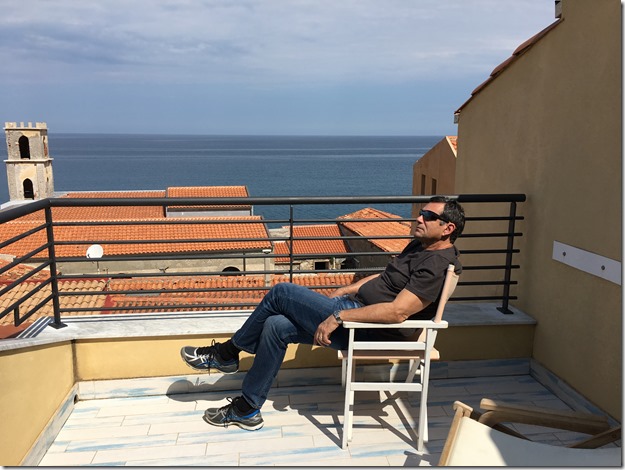 Between Sky and Sea is cozy and comfortable for two people.  It has a view over rooftops to the ocean. A derelict building’s bell tower stands tall, a proud reminder of past glory.  With the porch door open, I hear Cefalu waking up to the sound of passers by chatting and the occasional car or motorbike.   It is early morning.  I let Ellen sleep while I write. 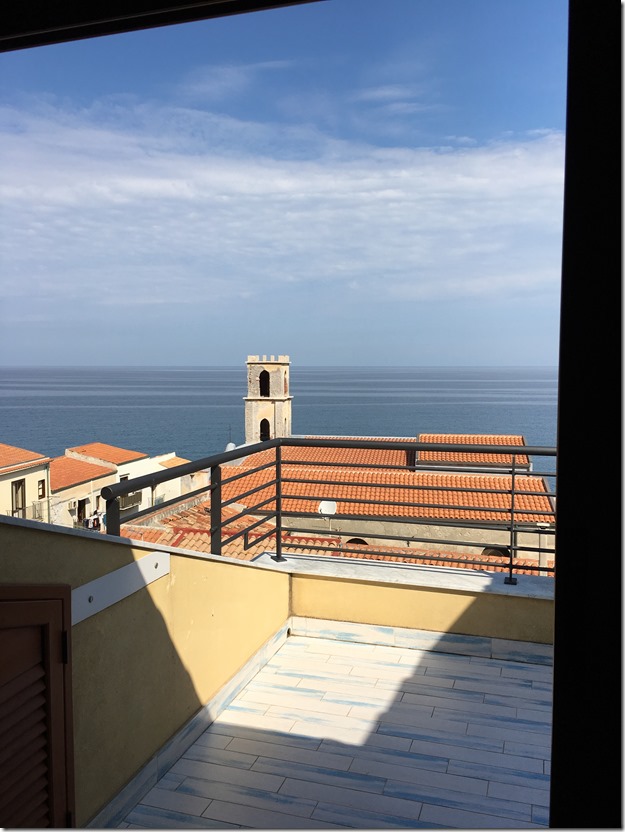 The apartment is the smallest we’ve rented thus far.  The bedroom is fine.  The dining/living room can be a squeeze with our computers, phones, and cameras and the two of us scattered about.  We would have moved the table out on the porch, but mornings and evenings are cool.  I’m inside with the heater running.  Aside from its size, everything in Between Sky and Sea works.  There is surprisingly good water pressure and plenty of hot water.   The shower is tiny even by Italian standards.  That’s fine, we spend little time in the shower anyway.  I feel relaxed even comforted by the azure sea view. 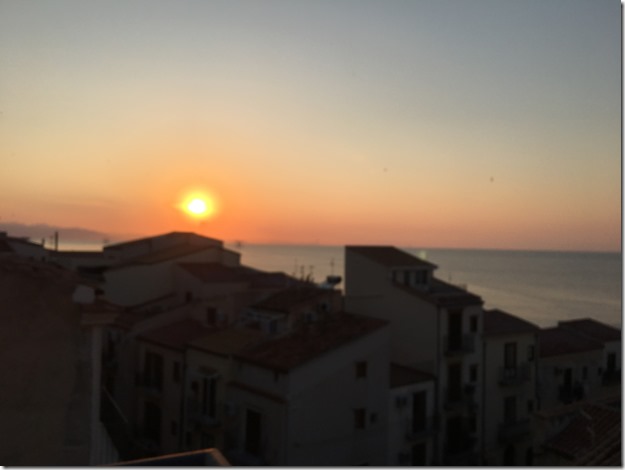 Sunset from our Balcony 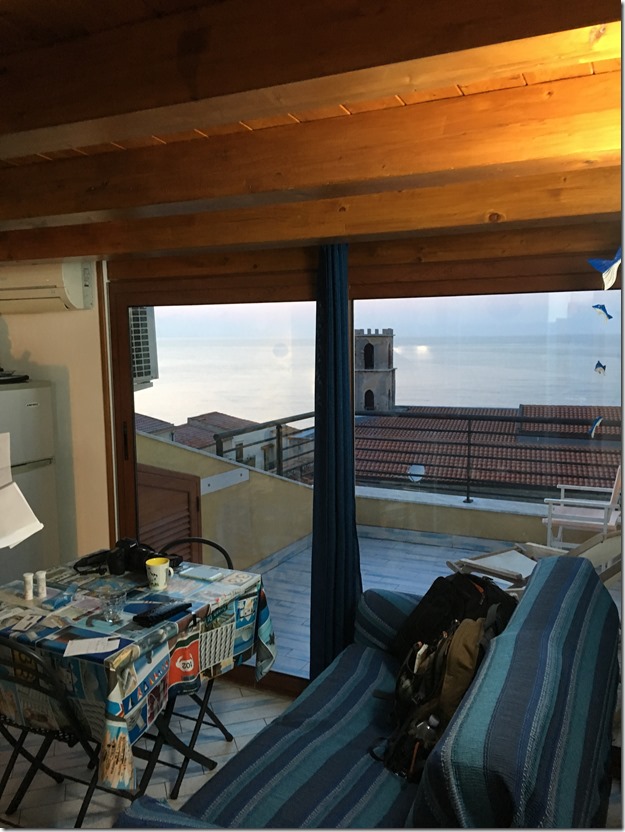 Living and Dining Room With a View!

The Small But Functional Kitchen

Up and out, we head for morning coffee.  Laura recommended “the shop beside the farmacia”.  As we turned onto the Piazza Duomo, a barker stopped us and offered a table.  Ellen hesitated and we almost sat.  “let’s get something for my cold at the Farmacia first”, popped into my head and out of my lips.  Ellen agreed and we said we’d be back.

“Buongiorno, I’d like something for my throat”, I said to the pharmacist, motioning to my throat.  Though my voice is so bad that probably wasn’t necessary. “Caramelle or “ and here he motioned toward his mouth as if spraying something and said, “tsh tsh”. “non caramelle, per favore”. “Utilizzare due or tre volte al giorno.”  “OK”

We walked out of the shop with a small fire-hydrant looking thing with a twist nozzle.  Fascinating, but how the heck does this thing work?  It took a few tries to figure that you press down on the “hydrant’s” top after twisting the fire hose up and stuffing that down my throat.  This stuff works!

Next we stopped at “our” coffee shop, the one Laura recommended.  “Salve, un cappuccino, un macchiado doppio, e due crema crossianti per favore”, we had our usual coffee and a bit more.  I should have ordered “due cornetti alla crema”.  Macchiado means spotted; it’s an espresso with a dollop of foamed milk.  We sat outside in the semi-sun, it was partly cloudy this morning.  We loosely planned our day: first find a supermercato for supplies and things we didn’t pack (we travelled very light), then perhaps walk the archeological site Laura mentioned, assuming we could find it.

My cheap TIM Samsung has been great for navigating with no worries about running out of data.  Google “markets around me” and we were off.  Funny, it guided us to the small market where we purchased menthol drops the evening before.  It is a market, but not what we’re after.  We headed out of Centro Storico to the new part of Cefalu toward where we parked the car.  I had to pay for another half day parking anyway.

At the Parcheggio, I showed my first hand written parking paper to the attendant and said I wanted to stay through 14:00 the next day.  No problem, 10 euro, another hand written note and we were good. With both notes placed on our dash, we were off.  I approached a fellow leaning on his car, clearly a local, “Scusa, dov’e un supermercato, per favore?” Not skipping beat the fellow pointed down the street, “dritto a quattrocentro metri poi andate a sinistra. E li”  “Grazie”  No problem.  The fellow was missing his two front teeth.  That didn’t seem to bother him at all.

Typical for us, we followed his instructions, but probably turned up a street too soon.  Another block down we asked the same question at a hotel. The concierge looked surprised, “dritto attraverso la strada” and pointed across the street. “Grazie”.  We did turn one street too soon!  There was “Deco”, the large name supermarket.  It takes some getting used to:: parking at the market is not free, carts to get your groceries out to your car are not free.  Many little conveniences are a few cents extra.  One restaurant charged us 4 euro each for our seat out under an awning! It’s not a problem, just one of those things in Italy. 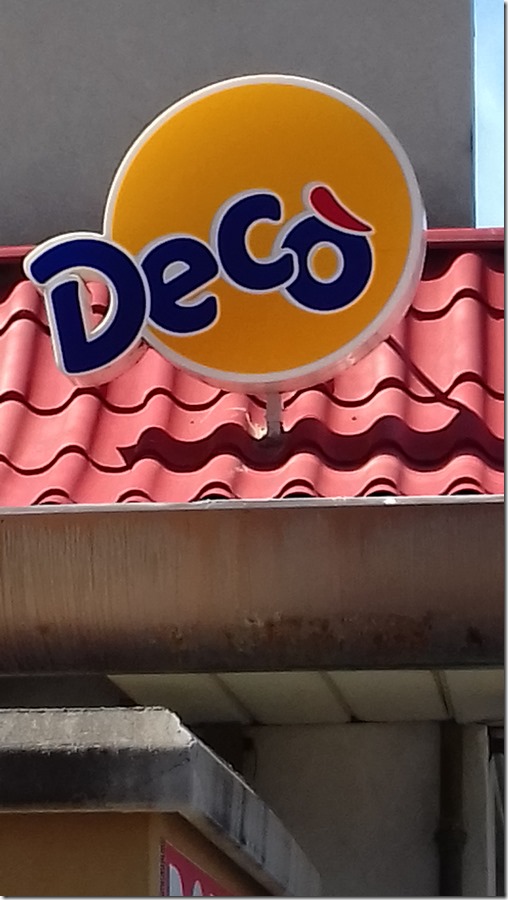 Walking back toward the hotel I noticed a huge sign “Musotto elettrodomestici”.   “No, I thought.  It couldn’t be.”  I steered Ellen toward the entrance and saw a hair dryer in a display case on the far wall.  We exchanged Buongiorno’s with an early 40’s woman who was probably a co-owner of the shop.  She spoke some English and we speak fluent “gesture Italian”.   Right away Ellen had a flat iron in her hands.  Being particular about things, Ellen asked if perhaps they had one that was wider/bigger.  Yes. But that iron came in combination with a hair dryer at 40 euros versus 20 euro.  Ellen left with her flat iron and without an extra hairdryer.  Today was a glorious day in the world of frizzy hair.  The sun was shining bright.

We passed a shop selling socks, calze (duolingo actually works!).  Both Ellen and I need more socks.  Ellen because her sneakers drag her socks into the shoe.  Me because I packed very very light.  The shopkeeper, a short older gal, spoke no English, none.  But she loved to talk. This was perfect, what an opportunity to practice Italian.  More often the Italians want to practice their English.  We purchased calze and tried to leave the shop twice.  Each time one of us would say something and conversation was off again.  We could easily have spend an hour there just chatting away.

On our way back we watched movers taking care of business.  I often wondered how large pieces of furniture were moved three or four floors up super narrow steep stairways.  Here’s the obvious solution. 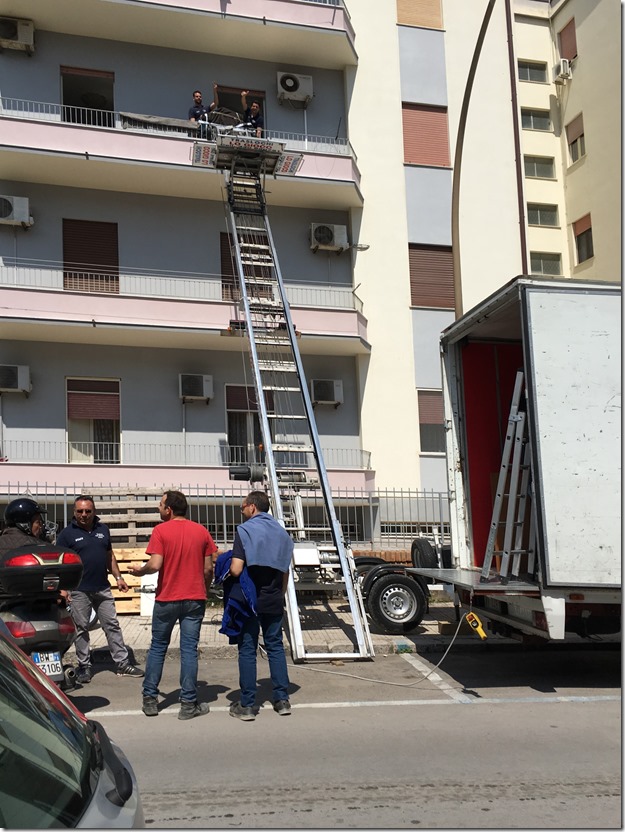 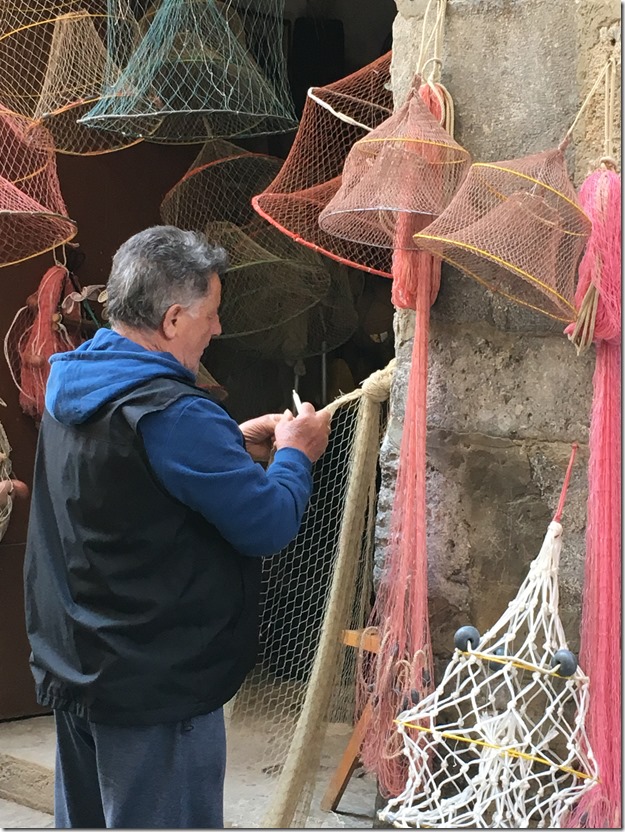 Not for Tourists, Repairing a Fish Net!

Ellen and I agreed that as much as we could, we would eat lunch as our main meal to keep some of the pounds off.  Walking back from our “sock gal” we looked for a place to have lunch.  Laura had recommended two local ristoranti.  We passed one of them on our way back “home”, Kenlia.  With no hesitation we went in for lunch.  It was now around 2pm.  The restaurant was mostly empty.  We were ushered to our table without noticing much but the view of the bay.  There were two other couples, and a multi-generational group of Russians.  We were pretty much alone.  When our waiter dropped by Ellen asked what the difference was between the spiny lobster and the lobster.   He siad, ‘eh, spiny e local.  fresha”  That did it for Ellen, she ordered the spiny lobster in paste.  We added a bottle of aqua naturale and a bottle of Nero d’ Avola, the typical Sicilian table wine.  We watched the world go buy through the drawn Plexiglas walls  First the water and wine arrived,  followed by an eggplant carbora appetizer which was fantastic.  There are two things I love about eggplant, it is a chameleon if not charred taking on the flavor of the sauce as it cooks and if it becomes distinctively and wonderfully different if charred.  This dish was both. 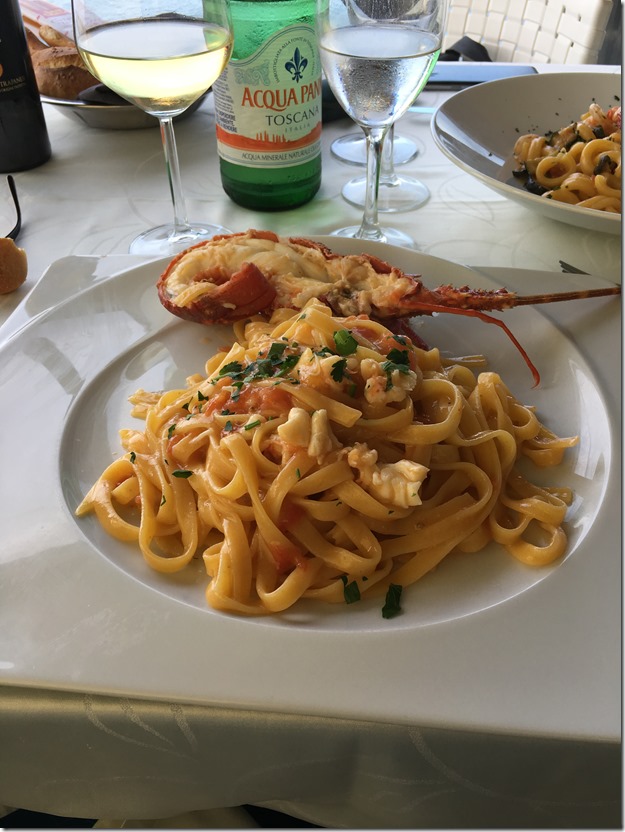 Ellen’s main course was impressive.  She had a whole spiny lobster, half  cut into her pasta dish.  The other half lobster was presented in the shell on her plate. I really enjoyed my pasta.  Ellen did offer me some of her dish; she was clearly so happy that I declined.

I later learned that Spaccatelle, the pasta I had ordered, is one of the few original Sicilian pasta forms.  Who knew. 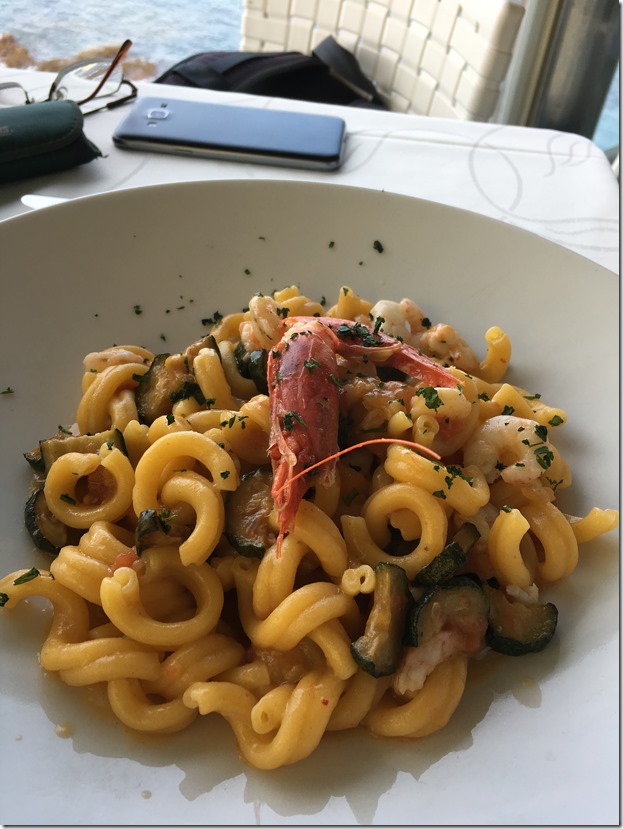 Spaccatelle, My Lunch. Good but not Spiny Lobster!

We savored the wine and food, then with an “Scusi, il conto per favore” we were off in search of the Archeological Site that Laura had mentioned.   On our way out, we noticed the restaurant itself.

Should You Eat Here?  Absolutely! 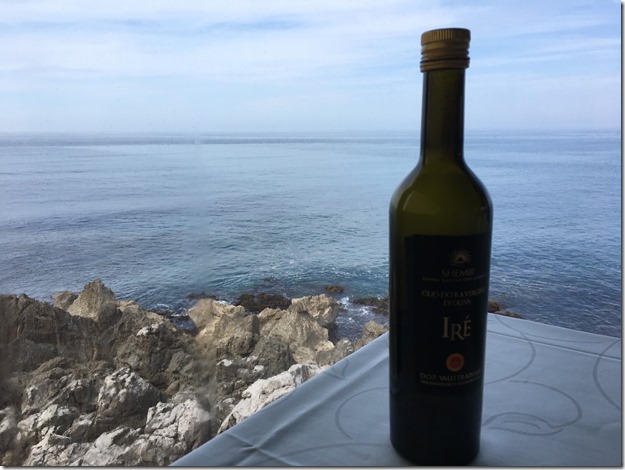 Oil at Our Table 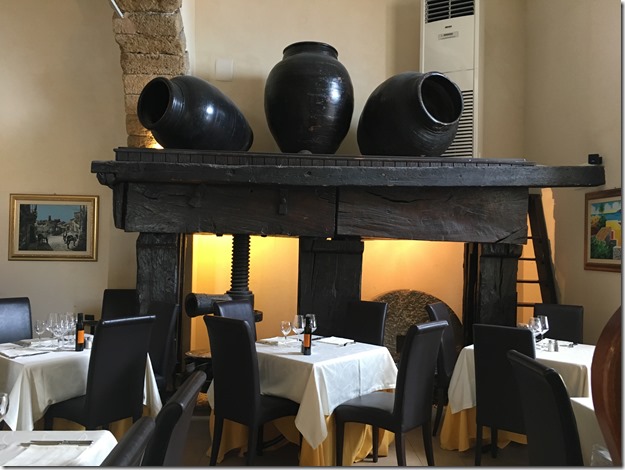 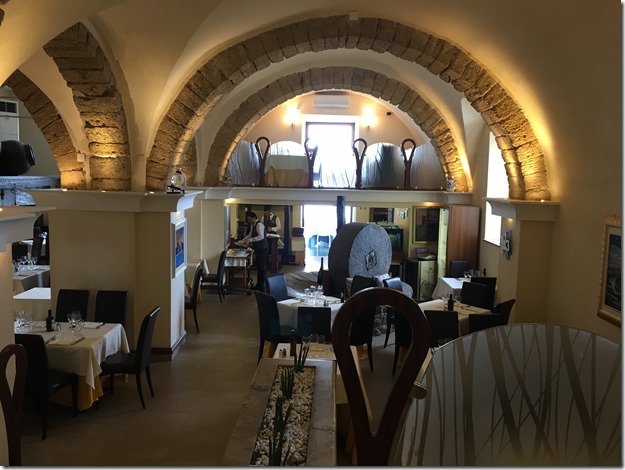 We both agreed we would not climb, “the rock”, which is of course exactly what we did.  The Archelogical Site is on the rim of the rock.  A castle stands still higher up in the center.  We compromised by not climbing to the Castle.   After the fall of the Roman Empire, the town of Cefalu dwindled as pirates of all stripes pillaged the Sicilian coast.  The city relocated to the top of The Rock, built fortifications, and with a massive cistern and food supply it withstood numerous sieges. Eventually the city relocated down on the shore where Cefalu stands today. The Rock is massive, impressive for its size and height.  It’s a nearly round  easily defended “mesa”. 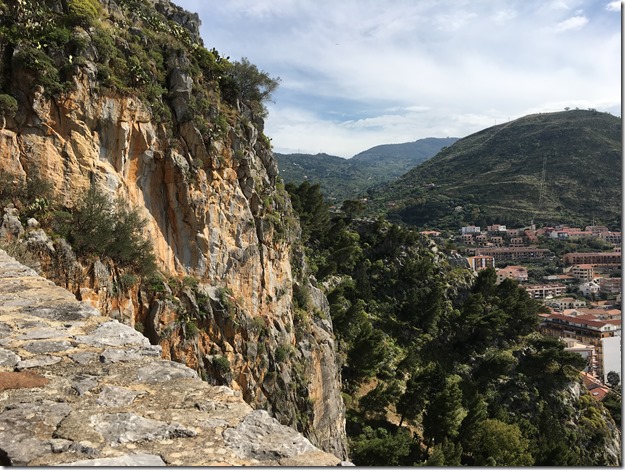 The Rock is Truly a Cliff Outcropping of Massive Proportion 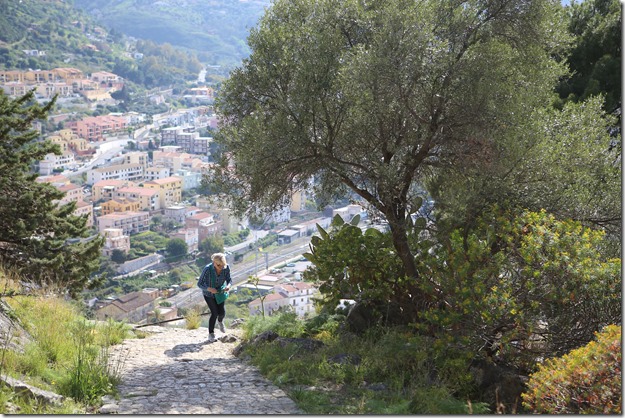 The Walt to Top of The Rock

Ellen at the Crenelated Wall atop The Rock 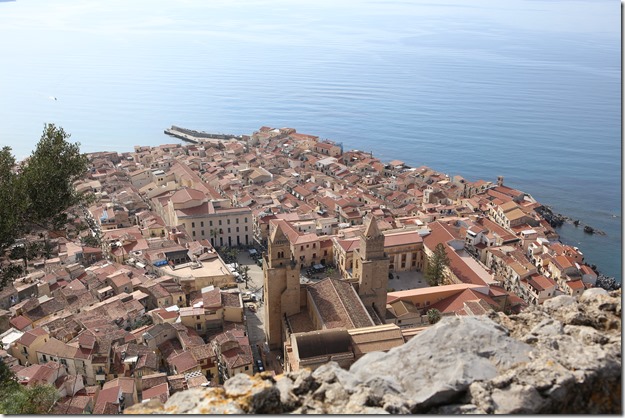 Back down in civilization, we went to “our” coffee shop.  I was feeling my cold something fierce and ordered an Irish Coffee!  Right, go to Italy and order an Irish Coffee.  The bar tender didn’t even blink.  Ellen had a double gelato. All were delivered to our table.  In all seriousness, the Irish Coffee was absolutely the best ever: espresso (not coffee), Irish whiskey, and real foamed cream (not whipped) garnished with flakes of coffee bean made with care.. 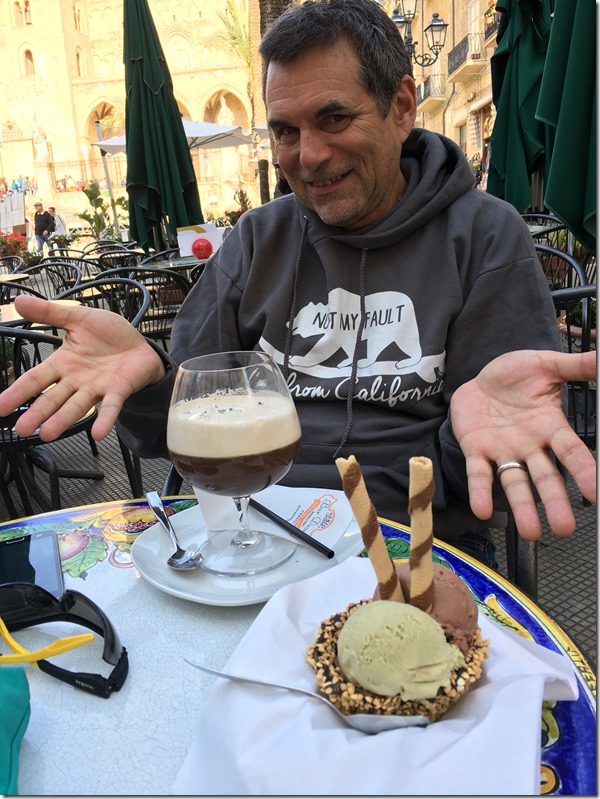 We walked the shoreline for a while as the sun set before heading back to Between Sky and Sea. We were sad to be leaving, but happy that to ;have experienced Cefalu. 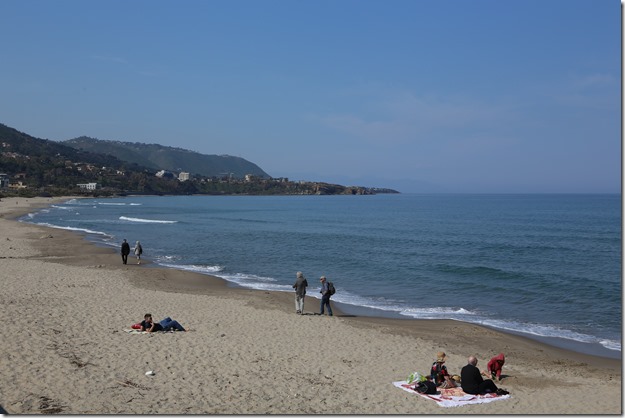 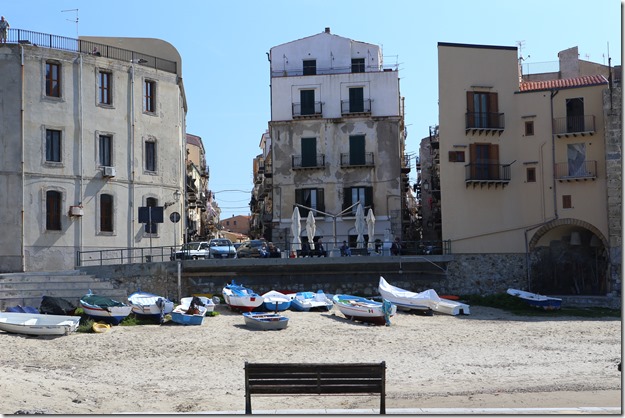 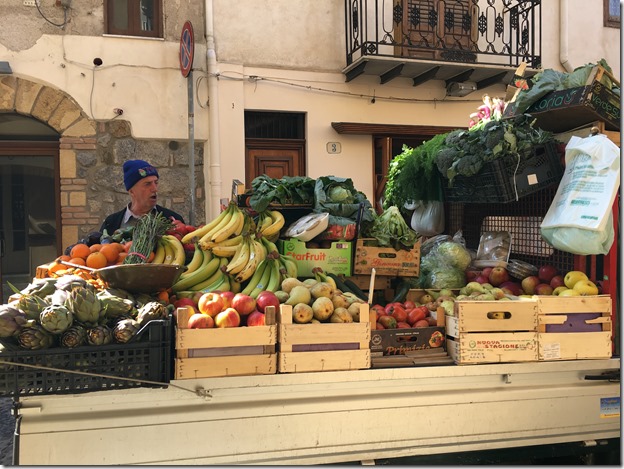 Fresh Fruit brought to You Daily!