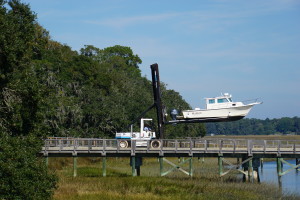 DeeDee had a family get-together/thanksgiving dinner in up-state New York weeks ago that we were fortunate to attend.  Jessie, DeeDee’s daughter, arrived and we met Ryan, her B-friend that evening.  We promised to visit them on our way back home.  After visiting New York City, Fort Mercer, and Valley Forge, we made a bee-line from Virginia to South Carolina covering 550 miles in a day to get to Hilton Head and Jessie’s house.  We arrived late.  Ellen called Jessie as we pulled up in front and both Jessie and Ryan greeted us.  There was ample parking by the club house/swimming pool.  We dropped “The Beast” off for two days while we had some fun. 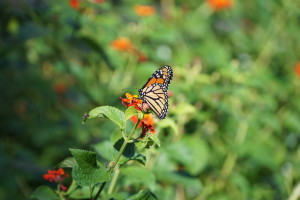 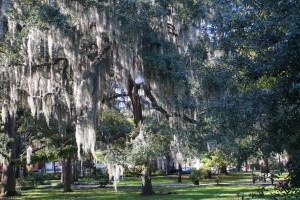 The next morning Jessie took us to one her favorite places, Palmetto Bluff.  On the way we drove past a marshy area where Jessie pointed out a few alligators basking in the sun.  I’d think twice before swimming in anything but deep waters here.  Jess said they don’t like salt water.  We had late breakfast at Buffalo’s and walked the shore at Harbor River. Just across the street from Buffalo’s stands a small, charming and understated, waterfront chapel.  Jessie talked about getting married in this chapel someday.  Later she asked at the local bridal shop for details about a wedding at the chapel.  Hummm…

Jess said every year there’s a big party on a sandbar just offshore.  Boats pull up on the bar and swim and cavort in the water.  I’m thinking, right with alligators.  Jess said they don’t come around here. 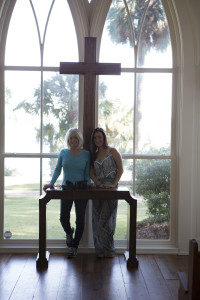 Palmetto Bluff is very beautiful.  There are a few magnolias. It is the oak trees covered with Spanish moss that are so dramatic.    Palmetto is a very affluent community with large tastefully designed homes lining the streets.  With no lack of water, lawns are bright green and extremely well maintained.  Jess mentioned a few celebrities who own homes here. 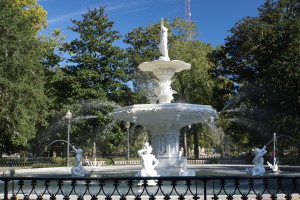 Our breakfast was very tasty.  I had a french toast sandwich consisting of two half slices of french toast cut diagonally with a fried egg and lots of naturally smoked bacon inside.  It came with two round hash brown dumplings.  Wonderful.  I shared a taste, and that was all. 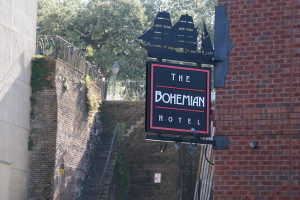 hat afternoon Jessie took us to Savannah.  Hilton Head is right on the boarder with Georgia. We walked riverside along the Savannah River for a while.  This is a tourist shopping area with a variety of restaurants.   Though we were not interested in shopping nor catching a bite, we enjoyed walking the cobblestone streets and esplanade. 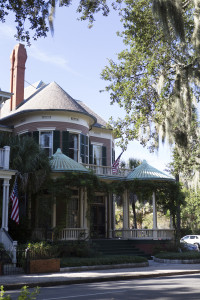 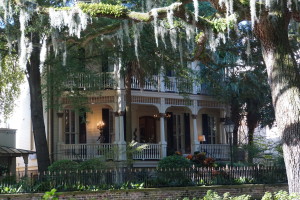 TTourist maps in hand, we headed off to Forsyth Park.  Savannah was the fist planned city in the United States.  Forsyth Park was central to that vision and the older homes around the park show it.  In the past fifty years, the roads around the park have become major thoroughfares complete with tour buses and an irritation to the owners of these gorgeous mansions. 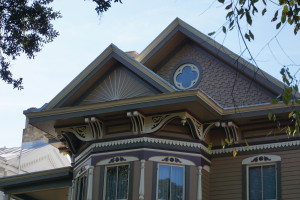 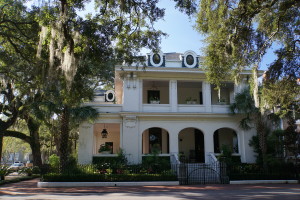 The three of us walked the park and ogled the mansions.  Seeing a sign for an open house a block off the park, we wandered towards a row of town homes.  A fellow stepped onto the sidewalk and asked if we were interested in viewing one of the units?  “Sure”.  He was a contractor who renovates homes for resale; these four were his latest project.  He had renovated a number of houses on the street.

This town home is very attractive with modern appliances, twelve foot ceilings, 3 br 2.5 ba and just off the park.  It is a very desirable area, though as we saw walking further down the street, more renovation is necessary.  Some of the houses showed decades of neglect. This home was light and airy and well appointed, though I thought it lacked down stairs spaciousness. 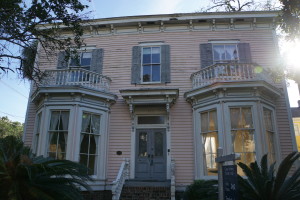 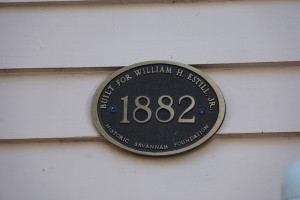 We met Ryan for dinner and headed out to a local sushi place that was good. Ellen and I had ordered our usual and something new for us,  a “volcano roll”, failing to notice that it was deep fried. It was good, but way over the top.

Jessie planned to cut our hair the next morning.  That same morning I decided to “fix” Ellen’s camera. Some of her shots were destroyed by a little blob in the lower right quadrant.  By elimination, I found that it was dust on the sensor and cleaned her sensor.  Right, I used a fabric that left more lint on the sensor than it cleaned off!  Oops.  I shifted to microfiber and at that point her camera popped up with “Camera Error  Turn Off and On to Recover”.  The camera was “hung” and would not turn off!  I re-seated the battery and the camera reset until the next photo when the error popped up again.  Crap, Crap. Crap.  This was not good.  I backed up her camera memory, re-formatted, and tried again.  Crap Crap Crap, same problem.  This was taking some serious time and her camera was still not working!  When in doubt read the manual, or in this case run a Google search.   There are two possible reasons for this problem: 1. the lense in incompatible with the A6000 or 2. something is screwed up.  (right)  If something is screwed up, reset the camera!  Yes, there is a camera reset that clears out a data base and some other stored tables.  After a reset, the camera still failed with “Camera Error Turn Off and On to Recover”.  This time turning the camera off and on cleared the error (probably by reading the newly created tables into flash memory).   By now there was no hope to both get haircuts and go fishing.  We skipped the morning haircut and headed off to meet Ryan at the marina.

We parked and walked down a pier.  I though we were looking for Ryan when a boat drove down the pier with Ryan at the forklift controls.  He was bringing his boat to the water!  Into the water went the boat and into the boat we went.  We were off.  There’s nothing I like more than being on the water; this was no exception.  It was a blast.  We rode past a number of beautiful homes on the Harbor River with private hydraulic docks.   It must be nice.

Ryan headed us out to fish at the Carl Bower’s Bridge.  Ryan said that he prefers fishing off shore, but that with the rough waters today, it was better to stay in the channels. No Problem, Ellen and  I would enjoy fishing anywhere.   We stopped up-current from the bridge, dropped anchor up-stream of the pylons, and dropped some chum.   Within ten minutes, Jessie hooked a small sea bass and I landed a redfish.  The next hour went without a solid bite though our bate went missing regularly.  Then Jessie landed another larger sea bass and half an hour later an Oyster toadfish.  The Oyster Toadfish is one fugly fish. Although Ellen did not fish this time she loved being on the water on such a beautiful day. She was behind the scenes photographer.

We all agreed to head back before sunset and saw a dolphin or two in the distance though none approached the boat.  We saw a seagull land on a pylon and tear pieces off a fish in its talons.  Talons?  It was not a seagull, but an Osprey with a kill. 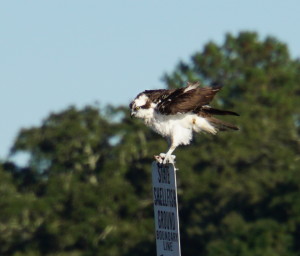 We arrived back at the marina with enough time for haircuts ahead of dinner.  We missed the sunset that evening, though dinner at home of baked and grilled fish was wonderful.

Ryan headed off to work early.  We had some time with jessie going over photographs in the morning.  Then Jessie went off to work and Ellen and I left for Natchez Trace and points south.

I was torn.  We could have stayed with Jess another day.  On our first trip driving The Beast back from Crowley RV in Bristol Connecticut, I had wanted to drive some of Natchez Trace and see Natchez.  We could not take the time and the weather was not cooperating on that trip.  I did not want to skip Natchez on this trip.  Then too, Ryan and Jess had to work today.  Off we went toward Mississippi vowing to return on our next trip to the South East next spring? 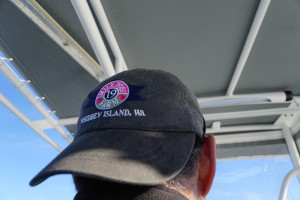 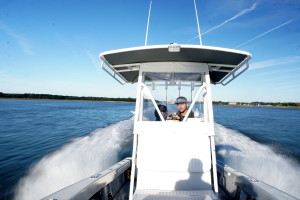 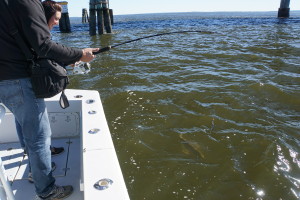 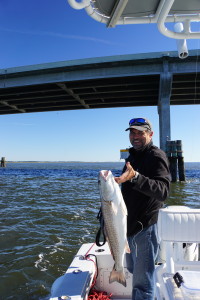 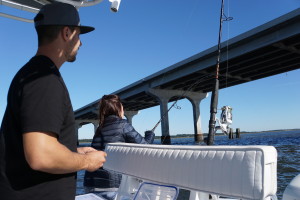 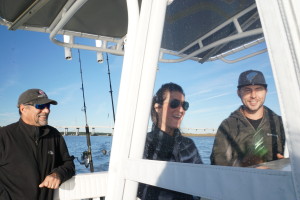 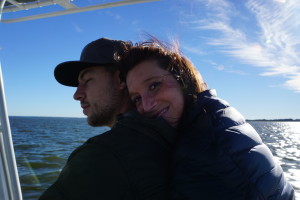