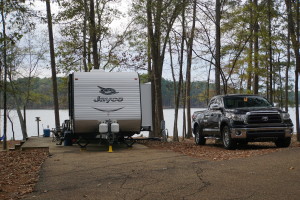 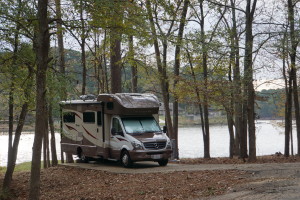 The Next Campsite Down the Lake

Leaving Jessie, Ryan, and Hilton Head, we headed west toward home.  Our GPS wanted to route us through Atlanta, something we chose not to do.  Instead we I-95 to I-85 to I-20 going through Columbus, Tuskegee, Montgomery, Selma, Meridian, and Jackson.  It was a long haul day driving through Georgia, Louisiana, and into Mississippi .  We need to be home by the 21st to host a family get-together.  Ellen would prefer to arrive home on the 19th.

As we pushed on, it became clear fatigue would set in before we reached Jackson.  Ellen found a campsite east of Jackson, Roosevelt State Park. I remembered Roosevelt Park from our inaugural trip driving The Beast back from Crowley RV in Bristol Connecticut.  No, it could not be the same park, could it? As we turned off I-20 and a bit later turned left into the park, I was sure it was the same campground.

On that trip home from Connecticut there were two outstanding campsites, Oak Hollow in Georgia  and Roosevelt State Park, Mississippi.  Our favorite campsite is #87 with its stairs down to the picnic table and a campsite dock on the lake.  #87 was taken.  We slipped into #88 right beside 87 and on the lake.  It was amazing that we happened to find this park and campsite without making it a point to do so.

Roosevelt State Park was much busier in November than it had been last February.  We arrived well after the office had closed, but made it a point to swing by the office in the morning to pay for our campsite.  I enjoy supporting state parks and in this case one of our favorite stops. 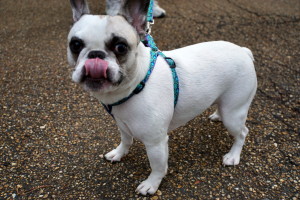 Just past Jackson in the town of Clinton, we turned south onto Natchez Trace Parkway.  The Natchez Trace is a historic forest trail that runs from Nashville Tennessee to Natchez Mississippi. Today the trace between Jackson and Natchez is a two lane road through remote sections of Mississippi. It is also one of the best maintained roads I’ve driven.  It winds through swamp land and forest then into vividly green pastures and farm land.. We saw very few cars on our drive south. 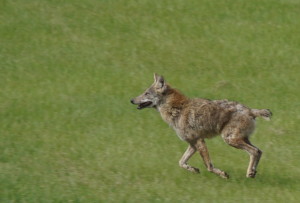 We did see a Coyote.

Natchez trace figures prominently in the Civil War. Ulysses Grant used the trace in his march north to Jackson and Vicksburg.  Though Sherman is better known for his scorched earth policy, it was Grant who developed the policy.  Interestingly he and 17,000 troops stayed in Port Gibson and at the Windsor Mansion.  Grant spared the town and the Windsor Mansion saying, “It is to beautiful to burn”, or so the legend goes.  The Windsor Mansion survived the civil war only to burn to the ground.  A careless smoker destroyed one of the most beautiful mansions in the south.

The Windsor ruins are about ten miles west of Natchez Trace.   All that remain are the massive columns that supported an above ground basement and two floors.  The ruins are roped off with warning signs stating that the ruins are unstable.  There is a path around the ruins that we walked.  We both gingerly stepped over the ropes and walked the ruins.   The columns were made of brick, plastered over and had iron Corinthian capstones. 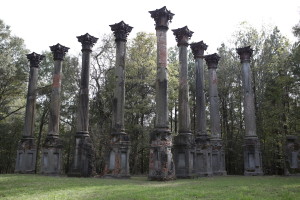 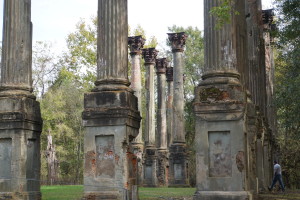 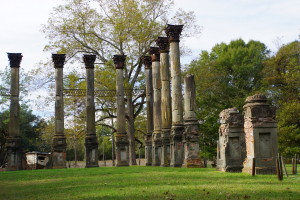 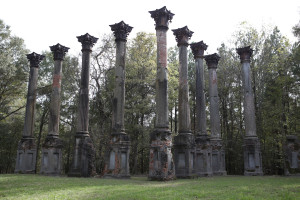 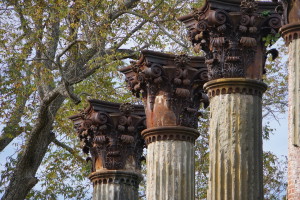 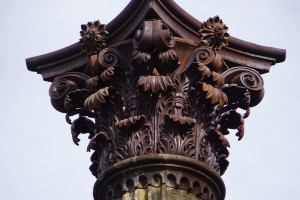 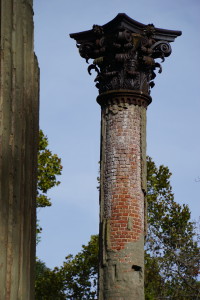 With the afternoon waning, we took highway 61 south to Natchez.  The trace is beautiful, highway 61 is fast.  The sun was low in the sky as we drove through Natchez.  Ellen suggested visiting the welcome center.  We could learn about the town and get a feel for what we want to do with our afternoon.  There are signs posted leading to the welcome center which is on the south side of town near the Natchez-Vidalia bridge.  It is not your typical tourist information kiosk; it is a huge building.  With limited time, we hardly noticed the interior of the building, focusing our attention on the attendants at desks behind two windows.  One asked if she could help us.  We asked for a map of Natchez and her recommendations for what to see or do with limited time. 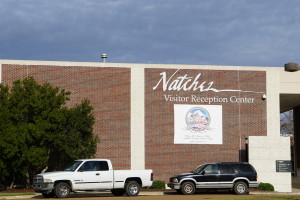 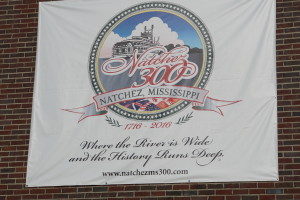 During the steamboat era more than half of the millionaires in the United States lived in Natchez.  Natchez supported the Union in the civil war and was spared destruction, unlike so many other cities and towns that Grant and Sherman marched through.

Tours of the mansions is a highlight of any visit to Natchez. On a Sunday  only a handful of tours are open.  We only had time for two half hour tours leaving a half hour to get to the first and a half hour between the two.  There was a full hour tour at another that we simply did not have time for. We chose two: Longwood, an unfinished mansion, and Stanton Hall located on a full city block.  we purchased tickets and took a map of the Natchez mansions with us as we went off to find Longwood.  Just before we left, I asked where we could get a bit to eat.  The Camp Restaurant and Magnolia Grill both at the waterfront were recommenced.  Ellen asked if there was an RV park close by. Yes, there was one just across the bridge in Louisiana that is right on the river.

We had no problem finding Longwood and stopped at the gate office.  “Yes, we are here for a tour and we have tickets”  There was a concert starting as we arrived.  We were directed to “RV Parking” at the back.  We walked back to the gift shop to start our tour along with a few dozen couples headed to the concert lawn chairs.   The band was playing and they were good! 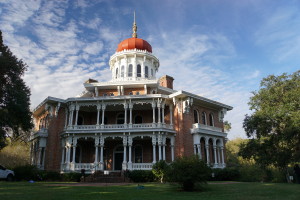 On our tour of Longwood Mansion, our guide stated that Adams County (Natchez is in Adams County) was pro-abolition and supported the north in the Civil War.  Nonetheless, Natchez surrendered to the Union on two separate occasions: once to the Army and a second time to the Navy.   A tour of Longwood Mansion is not to be missed.   It is an octagonal mansion that was never finished.  Dr Haller Nutt a wealthy cotton grower who specialized in the cultivation and sale of cotton seed, saw plans for a home by architecht Samuel Sloan of Philidelphia.  Sloan had never thought the house would be built, it was a study in what was possible.  Dr. Nutt contacted Sloan and with some changes, work began on the home.  The Civil War interrupted building of the mansion.  The exterior was completed as was the raised basement.  Thinking that the war would last a few months, the family occupied the basement (lower floor).  The war lasted much longer than a few months and tragically work on the mansion stopped with the upper floors unfinished.  A tour of the mansion starts in the lower floor, which is large and its octagonal shape is novel. Walking upstairs to the second floor is jaw-dropping.  The mansion is 30,000 square feet though its full size is not apparent until you walk to the second floor. The structural brick has not been plastered over, no doors are in place, and the sheer size of each floor is apparent.  The brick walls are massive. Five floors were planned with a central room open from the second floor to the roof. To finish Longwood as it had been envisioned when construction started would consume in excess of 35 million dollars today.  Longwood will never be finished.  It was sold to the garden society for $10.00 on the condition that it never be finished and that aside from repairs, it remain in its current state. 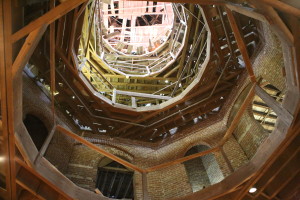 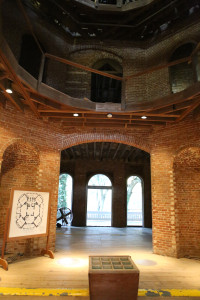 Unfinished Interior Second Floor and Up. 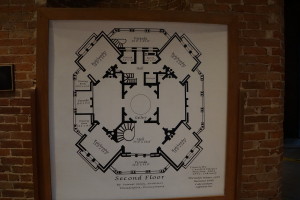 The original spire sitting atop the dome fell during a storm.  The Garden Club took molds of the original and created a light weight but strong replacement.  They are maintaining the exterior and addressing structural issues as they arise. 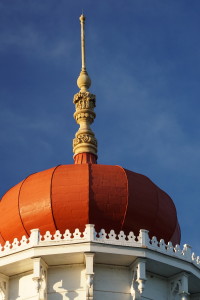 We were very lucky.  Our tour consisted of Ellen, myself, and our tour guide, who has spent many hours researching details of the design and history of both the house and the Nutt family. Our half hour tour consumed over an hour.  The three of us would have continued but for closing time. 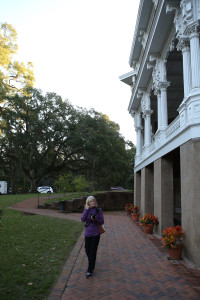 With a one hour tour, the last tour of the day at Stanton Hall had already begun.  We opted to go to the Magnolia Grill.  There was plenty of off-street parking for The Beast.  The restaurant is well located with a view over the Mississippi River, though looking away from sunset.  The fried green tomato appetizer was great.  Our meals were just OK.  (Ellen did love the appetizer; fried green tomatoes with craw fish and shrimp.) With the day gone, we could either drive back to Vicksburg as we had originally planned, or we could stay overnight locally.   If we stay locally,  we could lose a day’s travel time getting home if we explore Natchez.  Ellen called River View RV Park.  They had plenty of spaces available; we stayed locally. We will try to take the Stanton Hall tour in the morning. 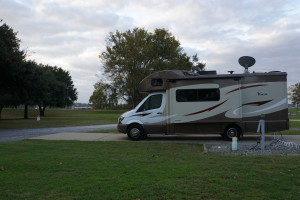 The next morning we didn’t dally.  Rather we went off to Stanton Hall for the first scheduled tour of the morning.  No photography is allowed inside the mansion, though we learned that there are a number of photos and video to be found on the web.  Our tour of Stanton Hall went quickly.  It is a beautiful home with amazing architectural detail in the molding, chandeliers, immense mirrors, medallions, and overall design. Greek-Revival style. The family remained in this residence until 1894 when it became Stanton College for Young Ladies. It was later purchased by Pilgrimage Garden Club in 1938.  For some years it was, a bed and breakfast.

Stanton Hall (originally named Belfast) is massive and a treasure, but it does not have the history of Longwood, nor the appeal. 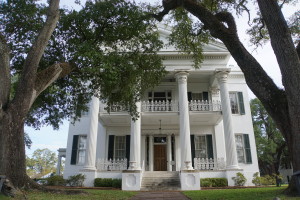 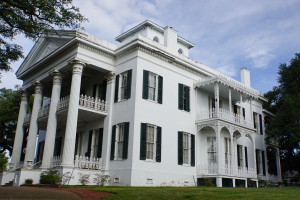 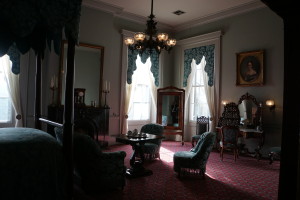 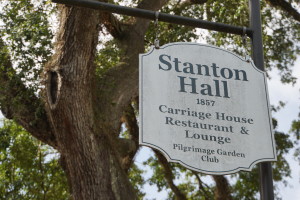 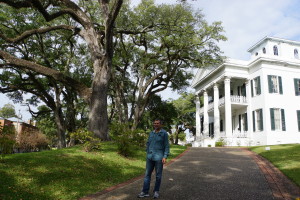 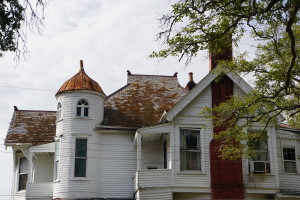 Across the Street, a typical Natchez home

Natchez feels like a city that has gone to seed.  Its glory days are long past.  It feels like the residents living there now take their history for granted or could care less.  Not all of them to be sure.  There is a lingering pride in the mansions that are preserved, a number of them are operating B&Bs today.   For all  Natchez’s beauty, and it has that in abundance, it does not feel vibrant.  Rather it feels like the young with aspirations have left for better opportunities; those remaining seem listless.  We will find a way to return to Natchez when we tour the south.  We love the history of the town and its wonderful southern charm.    I hope my first impression of the town is dead wrong;  that Natchez is a vibrant town.  We will look for a B&B when we return.  Stanton Hall was operated as a B&B into the 1990’s!

The music scene at Natchez is alive and well.  There was a concert playing at Longwood when we arrived.  It was the first concert held at the mansion; there may be many more.

We left Natchez for a long drive to Abilene Texas to put a dent in the 1750 miles we have to go.