I mentioned that Ellen had a good view of the lights from the starboard side while I braved the crowd at the bow.  I have some green hued cloud photos to show for my effort.

There was one Australian woman; who had asked John (organizer of the astronomical side of the voyage); asked John to setup her Lumix point and shoot camera.  He didn’t hold much hope for her with her diminutive camera, but he obliged.  I was present as this unfolded.  Surprise of surprises, this gal had a remarkable photo of a ribbon of green she photo’d on the starboard side. Good for her!  Yay John.    For me?  “Next Time”. 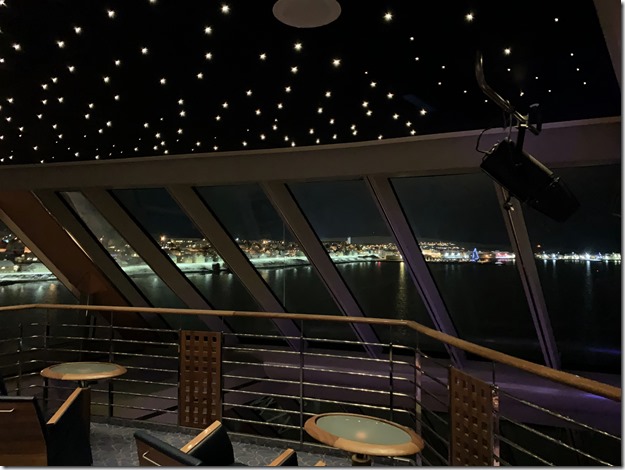 A view from the Observation Lounge

We are now on the return voyage to Bergen, stopping next at Hammerfest for nearly two hours.  It is Sunday today; all the shops will be closed.  Also we’ve been warned that it is very icy on the streets and that the walk up to the overlook is closed due to ice.

Even so, we may disembark and walk the town and wharf.  Ellen just looked out and said, “Wow, it’s windy out there! Yikes!”.  We may just grab a cup of tea and watch the world go by from the observation lounge.

It was here in Hammerfest that we took a bus tour to the globe marking the northern most point in Europe. 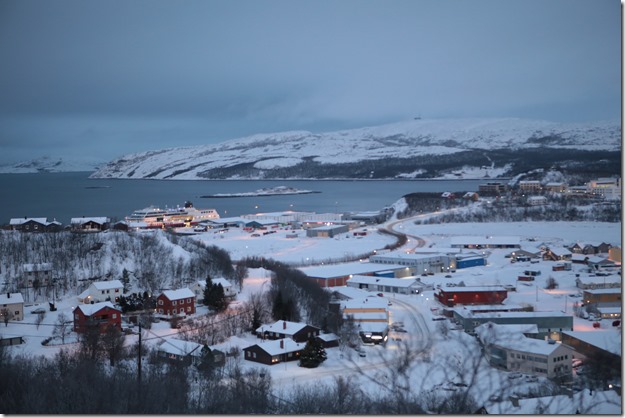 Per has been my go-to bar tender here on deck 8.  He also makes a damn good cappuccino.  I’ve been working from strong IPA like beers back toward Pilsner.  Yesterday I had my first yummy Pilsner.  Compared to most of Norway’s IPAs, the pilsner had better flavor except perhaps for the first Fjell 7J I had in Bryggen “years ago”.

This morning we were early for breakfast once again.  Today breakfast was practically empty at 7AM.  I think people stayed up waiting for a second coming of “the lights”.  That did not materialize.   This morning I walked the stern section of deck 8.  It was blustery, with a strong wind and spitting of rain/sleet.  “One hand for you, one hand for the boat”, that thought crossed my mind as I turned back walking into the wind.

If you travel, you know that merciless feeling of being tired the first day or two after a long flight, right?  My sense of time is usually thrown way off.  The excitement of being in a new land with adventures unfolding blunts the temporal body slam and after a few days things settle down.  Sunrise and sunset take over and redefine your day.

In upper Norway in winter, there is no sunrise and sunset.  There is a sense of gradual lightening from jet black to dark gray and maybe to steel gray, then back a few hours later.  It is typical to arise from a few hours deep sleep, check outside and see blackness.  Or to arrive back from a city tour at 1 PM in complete blackness.  Without a reference for the day’s end or beginning, it became extremely difficult for me to adjust temporally.

Yes, I can check my watch and know what time it is and how I “should be feeling”. Tell that to my body. It has a “mind of its own and it’s not my mind!”.  I can feel exhilarated  awaking at 2 AM after a few hours sleep and I can feel totally exhausted at 8 AM after breakfast and need to crawl in bed for a few hours.  We’ve been here in Norway for eight days.  EIGHT days in Norway and I am still not acclimated.   This may feel like a complaint or perhaps even that I’m whining (well a bit maybe).  It’s more just such an unusual experience I have to mention it.  I (we) are enjoying Norway tremendously, though we wish the Norwegian god of wind, rain, and snow was a bit more forgiving.   Ellen and I are resilient creatures  We will deal with whatever comes our way.  Just please Mr or Mrs Rain God, we need less character building and more “fun”.  OK?  more FUN as in clear skies, calm seas, little wind, and no rain. OK?