Ellen’s half sister, Elizabeth, lives somewhere in Rhode Island. We had planned to relocate to a campground on Rhode Island’s sea shore yesterday to be closer to her, thinking she would live by the sea.  The rental car would go back and off we would go.  It was a good thing that Ellen messaged Liz.  Liz lives in Woonsocket R.I. which is on the northern border with Massachusetts, about a twenty minute drive from here. There was no point in pulling up stakes to head to Newport when Foxboro is closer.  Caile at Enterprise said we’d have no problem keeping the car for another two days.  OK, now to extend our campground stay.

That was sketchy at first.   The guest who reserved site 1001 had not cancelled and we would have to move.  Jess gave us site 611, but another gal, Carla, said that the guest who vacated 611 moved to 612 and they wanted 611 for friends arriving today.  Jess had been booking 611 while Carla was on the phone and saw 611 got reserved.  I waited patiently while Jess looked for another site for us. There were no other sites available for two days!  With me standing there, Carla said, “if that’s what has to be, it’s OK”.  I thought we had just been bumped. Instead Jess handed me the 611 signs for the car and RV.  ON Veteran’s day weekend the fees at the campground are half off.  Even the sticker I purchased was 50% off.  No wonder the camp was filling up.

Also Thursdays is roaming propane day.  I ordered a propane fill at the desk and was assured that a truck would drop by after noon and fill our tank.  We wouldn’t have to be at the RV. Great. I wonder if the propane is 50% off too?

Moving from #1001 to #611 was a breeze with the rental car.  Hoses, stabilizers, leveling blocks, mats, everything but the electric cable went in the KIA trunk.  With antenna down and push-out in, we drove the 200 yards to #611.  The site was nearly flat with no need for the leveling blocks, but there’s a maple tree that precludes sat reception.  I tried jockying the beast about, but “resistance was futile”.  Still there are the local cable channels.

Ellen messaged Liz to plan our next few days.  She will call Liz at 1pm and in the meantime  we walked the campground.  The rec. lodge is remarkable for it’s size and comfort.  You walk through a small foyer with flyers and a few vending machines into the large meeting hall.   Rooms sit on either side of the hall, ping-pong tables sit in a glassed in room to the right with stairs going up to an adult only loft with a fireplace, tables, and games.  The room to the left of the hall is a game arcade, rest rooms and stairs going up to a children’s loft with tables and games.  To the left of the hall stairs go downstairs to the indoor heated swimming pool, the Jacuzzi, and weight room.  There are two pool tables in the adult loft with doors that lead into a large deck overlooking two outdoor pools.   This is indeed a resort and not simply a campground.

We relaxed on the deck for a bit.  Ellen pointed out a propane truck near The Beast that she had seen drive by.  Moments later a phone call from the desk interrupted our reverie.  All our bins were locked; the propane guy couldn’t access our tank.  I assured Carla that the propane access panel was not locked (actually it cannot be locked).  With growing confusion over where the access panel was, took the short walk over to Li’l Beast.  The propane guy was gone!  Carla assured me that he would be back in a few minutes; and he was.  The fill took a few minutes and he was off to fill another RV.  I am always amazed that a propane fill takes so little propane.

In the meantime, Liz had contacted Ellen.  The best time to visit would be Saturday.  We had thought perhaps they could come to the lodge and enjoy the Jacuzzi and pool, etc, but that’s not going to be since Liz’s daughter, Vanessa,  had to worked late Friday night. Liz will be baby sitting the her grandchild. We have two more days to explore New England.

By now it was late, closing in on 3 pm, but Newport is only an hour away.  we figured we could cruise down to Newport and visit the seashore.  Newport was my favorite place to surf while I was learning in my teens.  I remember some gorgeous houses right on a beach in the area.

Not the houses I remember, but what a location

we were loading the KIA when our neighbors arrived.  I walked over and met Dennis, Kathy, and their two papillons, one a few week old puppy.  Who doesn’t have a soft spot for puppies and kittens?  Ellen joined the conversation moments later.  Dennis said, “If you do go to Newport you have to stop at”, then he asked his wife if she remembered the restaurant’s name. “Anyway, you have to stop there for a bite to eat.  The memorabilia hanging on the walls and from the ceiling is fascinating and the food is good.  It’s in a red brick building at the start of the main drag.”  Kathy remembered the name: the Brick Alley Pub and Restaurant.

The drive to Newport goes quickly.  Beware of the drivers around Providence, Surprisingly it was here in Rhode Island that we saw some of the worst driving on this trip.  Cutting across lanes to make an exit, high speed passing and swerving through traffic to “get ahead”.   We enjoyed the bridges to the islands, though you pay a toll going and coming: $2.00 per axle.  I attempted to find the beach I surfed eons ago, and failed.  We drove Ocean Avenue around Brenton Point State Park.  The Ocean Avenue drive is past palatial homes fronting on the ocean.  We drove past a dramatic Inn, U-turned, and stopped at the Ocean Cliff Inn.  The inn’s architecture is very dramatic.  The house was build in 1864 as a summer home for Arthur Bronson of New York.  The original house burned down.  The current house (Brownstone) was rebuilt in 1894-1896 by Gaun Hutton of Baltimore, It was converted into an inn in 1954. 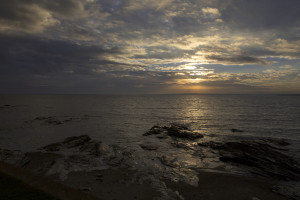 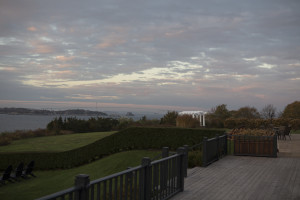 Ellen and I walked to the expansive side deck overlooking the bay and ocean. I walked back to the front of the inn and through the entry along with a wedding party returning for dinner.  At the desk I asked if the rooms were varied and about the restaurant’s menu.  Each room is different, some are small, some have detached private bathrooms, some are large.  The daily rate for a room was surprisingly reasonable. “Would you like to see some of our rooms?” “Let me find my wife, she would love to see a room or two”, said I.  Meanwhile Ellen had been looking for me.  The two wooden doors that are the front entrance look nothing like the entrance to an inn and more like a double door to a private suite.   Chris very graciously showed us six of the rooms in the inn.  His favorite is also the least expensive.  What makes it unique are the third floor double windows overlooking the bay facing the queen bed.  It is a small but intimate room.

Parking in downtown Newport is free from November first through the winter.  That is far preferable to the $27 we were charged in Harvard Square for a two hours.  Brick Alley Pub has an eclectic menu including Steamed Portuguese Little Neck Clams and a surprisingly complete wine list including St. Clemens Oroppas.  We ordered too much food: an order of Steamed clams each, and an entree each. The Steamers were prepared in a broth of green peppers, onion, and a Portuguese sausage and served in the broth.  The clams were great.  The sauce was made for dipping and Sue, or waitress, waited to bring bread until the clams arrived at table.  She didn’t want us eating he bread without the sauce!  The appetizers were a full meal. 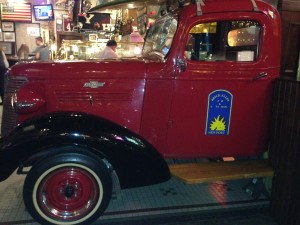 Keep On Truckin’ in the Pub 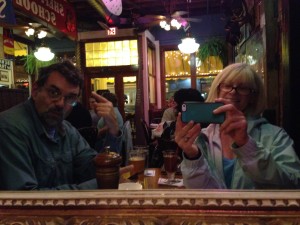 What’s with his hair? 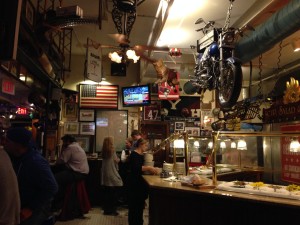 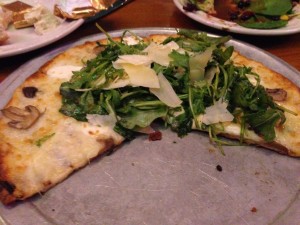 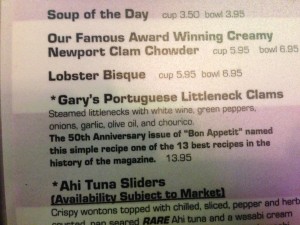 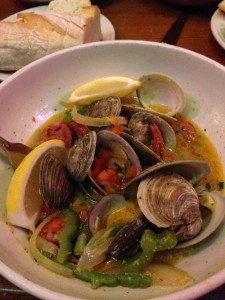 And Here They Are!

We Each Had a Bowl

The drive back to “camp”  (It is more like a resort) was fast and uneventful.  At the entry gate, our code would not work.  I tried a number of times then gave up and called the night entry number.  A few minutes later camp security arrived to let us in.  My code should have worked, perhaps it was not renewed. 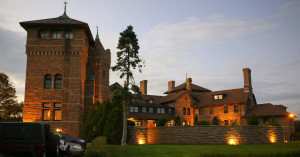 We’re headed to Newport again.  I’m sure the beach I surfed and the houses I drooled over are on the shore south of Newport.  We’ll visit Jamestown on our way south.

I just called Rhode Island’s EZ Pass office to see if and how we can get an EZ Pass.  Their office is in Jamestown.  We’re headed that way anyway, why not get an EZ Pass for The Beast?  We’ll see how this goes.  Talking to Jamie at the office, there is seldom a wait.  We’ll get the pass today.  It will be activated in Rhode Island tomorrow and out of state a day later.  Sounds good to me.

More to come when we return.