Today the Zygote says it’s gloriously sunny with a few high wispy clouds.  It’s also cold.  Temp shows 33 F.  It dropped to 30 overnight, not cold enough to freeze our lines; not yet.  I’ll have to read about Winnebago View’s cold package and how it does its magic.

The weather report is for rain and 44 F today.  It sure does not look like we’ll get rain. Tomorrow a fully sunny day is expected.  Monday and Tuesday should be warm and partly sunny. Wednesday & Thursday will be trouble.  Wednesday a high of 30 and a low of 9 is expected in Gardiner.  Thursday is not so bad with a high of 35, low of 9.  I might be able to get by with additional heating like 100 watt light bulbs strategically placed near the water tank and the outside shower.  We’d have to keep the heat on at night as well.  Set the thermostat to 50 at night.  So far the heater stays off all night.

The first words Ellen spoke this morning.  Sounds great to me.

In short, there are none.

This morning Ellen said, we could rent a car to drive to Lamar Valley tomorrow morning.  It turns out there are no car rental companies in Gardiner.  There is a web personal car rental group, but all the cars are located in Bozeman or West Yellowstone.  They’ll deliver, but I doubt that offer extends to Gardiner.

I’ll ask Curtis if anyone he knows would rent their car for a day. 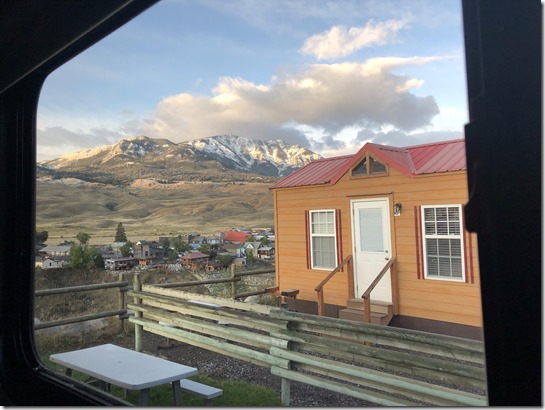 This park is very well done.  The showers are tiled and look brand new.  At 38 F outside, they’re heated sort-of.  An on demand heater provides boat loads of hot water.   Curtis and Jessica, his wife, put thought and feminine attention into the design of this park.  The views from the bluff are an added bonus.

I walked to the shower with a couple who were walking down the hill for breakfast.  We had a chat about elk and bunnies (there was one sitting under a car).  I mentioned walking to breakfast to Ellen, but she’d already eaten by the time I got back.

Elk rut is ongoing.  Males are bugling; females are running about.  The elk are very successful near and in the park. This morning about an hour before sunrise we heard elk bugling, some at a distance and the male here at camp responded.  He was just outside or motorhome.  I was awake enough to notice, not to make a recording.

What was a glorious morning has turned overcast and cool.  The prospect of rain is increasingly likely. 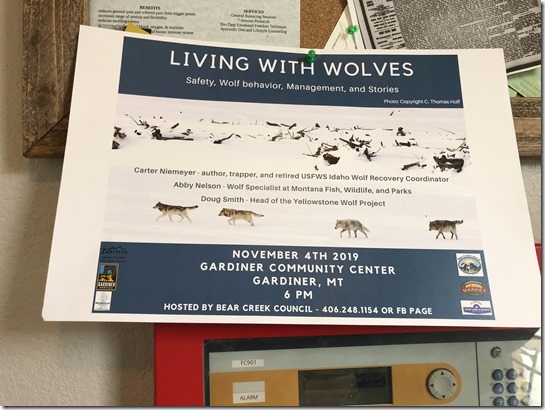 We’d Plan on This, but We’ll be Long Gone

We’ll walk downtown this morning.  We may drive to Lamar Valley to check drive time and “just” to be there.  Our plan is to leave Gardiner for Lamar Valley around 6AM.  We should arrive well before sunrise.  We’ll scan the tree line for wolves and bear.  I’m sure we will encounter elk and bison as well.

We’ll head over to Chris’ photo gallery to take delivery of our photograph later today.  It’s a big print, 6 ft wide.  He caught elk walking on a ridge with four wolves in pursuit printed in ecru.  The photo is in muted grays.  I could feel the cold just looking at the print.  It’s a wonderful photograph, but not the one we chose. 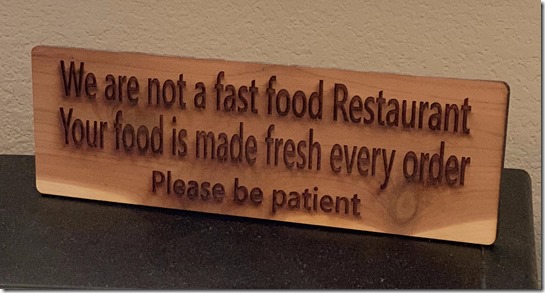 We walked into downtown Gardiner after scones at the Wonderland Café.  Yesterday their huckleberry were sold out.  We walked around town, Chris had customers at his gallery.  We walked on to  Yellowstone Forever and chatted with park representatives.  There were overnight road closures.  Dunraven Pass between Tower and Canyon is closed as is the road south to Grand Teton.  Road conditions in the park are variable and change by the hour.  We’re being careful not to venture out in a storm and not be able to get back.  “Is there an ATM in town?”, I wanted to pay in cash for our campsite to save them the processing fee. “Yes, I think there’s one in the Two Bit Saloon.  It’s probably the only one in town now.”  Ellen asked about local car rentals.  There are none in Gardiner.

Leaving Yellowstone Forever, we walked past Wonderland to Two BIt and the ATM.  Back at Wonderland with cash in hand we ordered three huckleberry scones, one Raspberry, and a double cappuccino.  The sampled the scones with the cappuccino.  That cap was exceptional.  I’ve made it a point when we travel to always let people know when something is exceptional.  Ellen said, “You just wanted to talk to that young girl.”  We both had a good laugh.  I carried that theme along conversationally for a few minutes.

I very highly recommend Wonderland Café.  It’s a step above hamburgers and fries.  Off-season Gardiner closes up.  Even in high season, Wonderland would be a great place for a bite to eat.  Try their cappuccino in the morning. 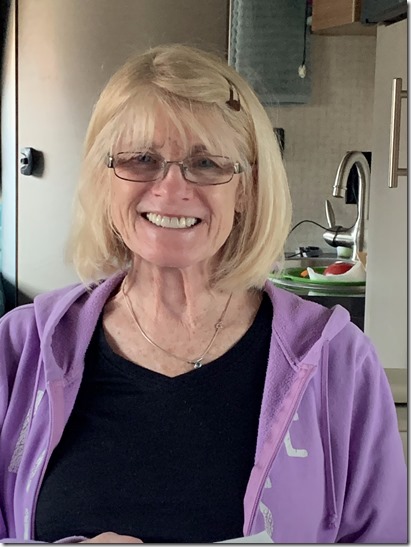 Back “home” we walked the camp.  The elk were nowhere to be seen.  I called Jessica and arranged to stay for a day or two.  We’ll settle up at her convenience when we’re “home”.

Funny, Ellen just asked if I remembered where she had her blueberry whatchamacallit.  Saved by our blog!  She had a blueberry pizza at Wine Down Dog in Castle Rock on Sept 13.  When we revisit cities and towns  I’ll read past blog entries.  That way we can avoid the bad, and get reacquainted with the great.   I think in this case El wanted to post about her experience in Castle Rock. 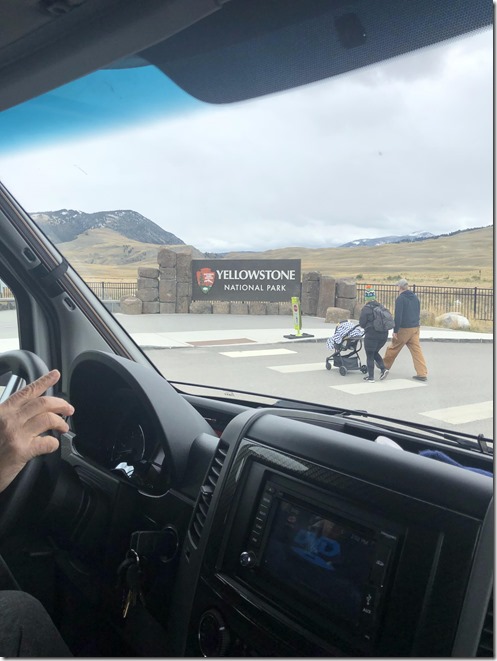 Back into the Park 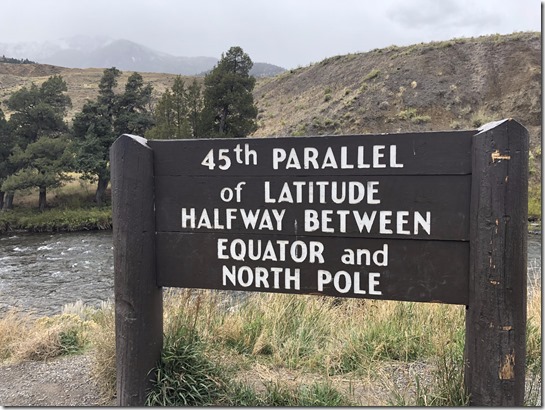 Why Stop and Read Signs?  Because…

Having a Jog at the Forty Fifth Parallel

There is a turnout on the left just inside Yellowstone’s north entrance.  From parking a trail leads along the Yellowstone River.  Every time we’ve driven past, there have been a number of cars parked and people along the trail.  Today we’ll go there first.  Perhaps we’ll get to Mammoth.  I’ve considered driving to Lamar Valley today.  The road between Gardiner and Cooke City runs through Lamar Valley.  It is kept open all winter.  It was a snowstorm over the pass toward Lamar Valley that turned us away last year. We’re not so easily deterred now. 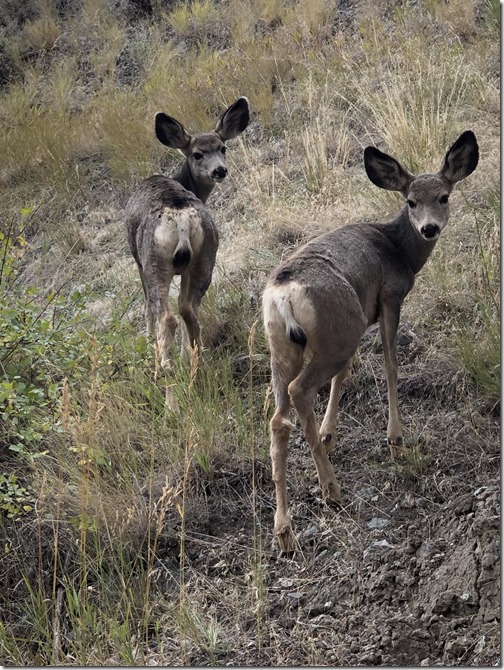 Traffic Stopped for These Guys

Along the Yellowstone, Lower Road to Mammoth

We lounged about until about 1 PM.  Weather didn’t improve or degrade.  We “broke camp”, which meant pulling in our DirecTv antenna, disconnecting the cable wire, bringing the push-out in, and disconnecting power.  We have a “pre-flight check list” to avoid major mistakes.  After a walk around (did we leave anything, is the antenna really down, how do the tires look), we drove off to Yellowstone Wild to pay for and pick up our photo.  Chris had the photo packaged up and waiting.  We talked about Yellowstone, how he came to photograph “the hunt”, his amazing shot of four wolves chasing a herd of elk.  We had to look closely to see the stones the elk kicked up as they ran and one of the wolves was practically airborne with one foot on the ground.  We talked about how quickly a situation changes and how photographing it is so difficult.  You cannot predict lighting or animal behavior.   Chris said he spent four days getting that shot.  The ridge was the only place in that area the snow had melted.  There was nothing to eat in the valleys.  The elk congregated on the ridge and a wolf pack did too, but a quarter mile away.  This is an amazing photo, and it is not ours.  Chris took “our” photo on October 2, 2015.

Our Package Safely Stowed in our Shower

Ellen mentioned to Chris that there’s a turnoff just inside the park where she’s seen gaggles of people hiking in.  “Oh, you mean bubbling waters.  It’s a place that hot springs feeds the Yellowstone River.  There are hot pools in the river that people soak or swim in.  They’re comfortable and  very popular.”  We chose to drop by on our way to Mammoth.  Chris offered to help load the photo in our motorhome.  “No, it’s ok”, I said, “I can handle it”.  I was surprised at the weight of the packaging.

The photo would not fit in the back of the shower stall.  The specs I saw for the Winnie View shower must have been for a different year or model.  There was no way.  We considered putting it in the bunk over cab though what a pain that would be.  We’d constantly bonk our heads getting to/from the cab.  Ellen said, let’s try the  shower again.  We managed to get it into the shower kitty-cornered.  Whew.  What a mess it would be otherwise.  The photo will sit in the shower until we get home (or until we reach San Diego, whichever comes first).

No Crowds at All 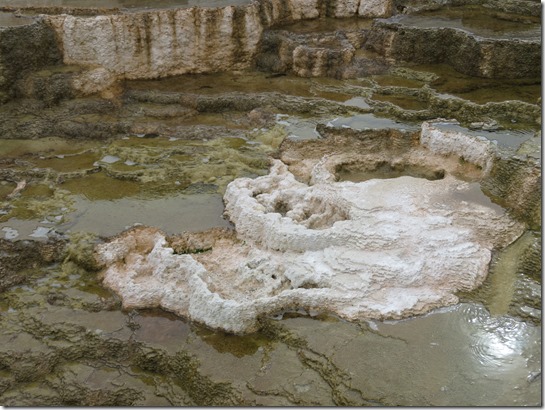 This time entering the park, I gave the ranger my senior pass and license. “Will you need maps for the park?”  “No, we’ve been before.”  “It looks to be snowing in Mammoth.  It’s higher than here.  Those rigs handle snow pretty well though.”  “I try to avoid driving in snow.  We’ll see how this goes.”  He gave my pass back and smiled. “Have a good one.”

We drove off to find the hot springs.  The turnout was impossible to miss.  A sign read “Congested Area Ahead”.  There was a roadside strip on the right that was full and two parking areas left and right.  A sign read “20 ft vehicles only”.  Unhappily, we drove past.  “Another day, another time” we said.

Snowflakes.  Mammoth was gray with very light snow falling.  There was some wind as we stepped down from Li’l Beast.  Temps read 38F; we dressed for it.  “Should we stop for hot chocolate and a pretzel?”  “How about on the way back”, I said.  We walked the middle section of the Mammoth Travertine steps.   The more we walked, the warmer we became. It’s hard to describe Mammoth Hot Springs.  I suppose it is a lesson in how travertine is created.  I could never put travertine in a home without thinking of Mammoth.  I was impressed by one little fellow who ran past his dad, “Wow, look at that.”  Dad, “Isn’t this amazing” “Really cool, WoW”.   It IS really cool. 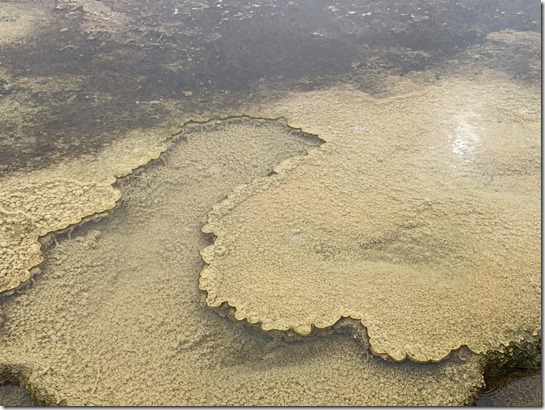 The Pools of Thermophile Are Fascinating 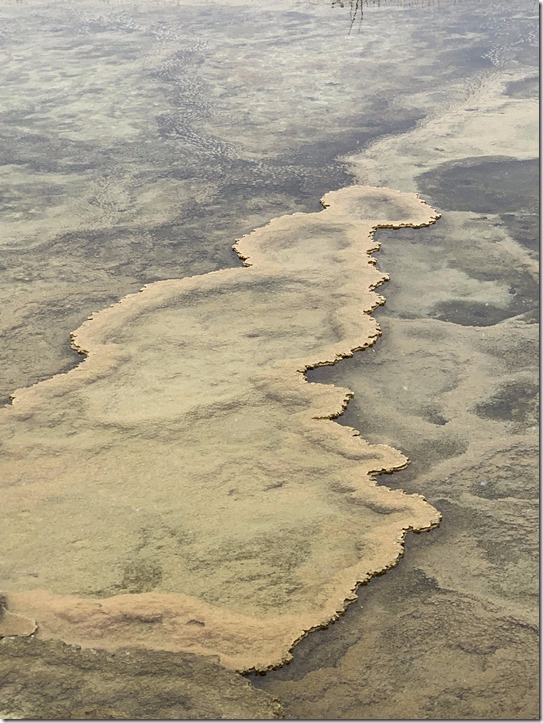 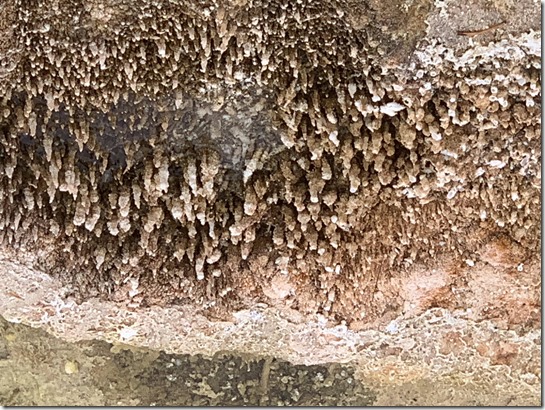 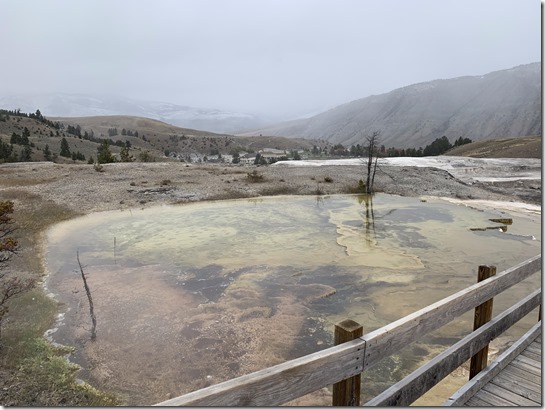 Toward the end of our walk, the sun broke through.  Clouds started to disperse.  I love sunshine.  It lifted our mood mightily.  At the general store we skipped hot chocolate for a double scoop of Huckleberry Ice Cream!  Ice cream in the winter?  You Betcha!

Driving back the Hot Springs turnout was full.  “Let’s drive west from Gardiner to the Cottonwood grove we saw last year.”  We found the turnout at a bend in the Yellowstone River fronted by a line of cottonwoods with a grassy field across the river.  A herd of elk were feeding on the fresh grass.  The cottonwood are beginning to turn.  We’ll check back before we leave Gardiner/Mammoth.

Our resident elk are out and about.  It’s about 7 pm, just around dusk.  The bull has been bugling like crazy.