A Few Photos Taken from the Jolly Trolly Yesterday 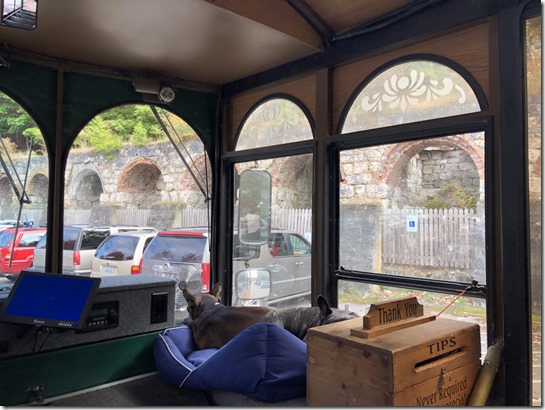 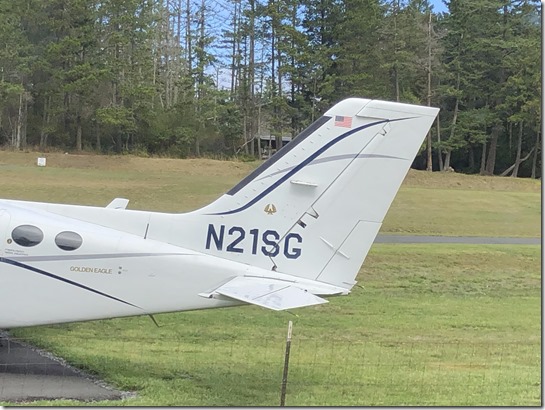 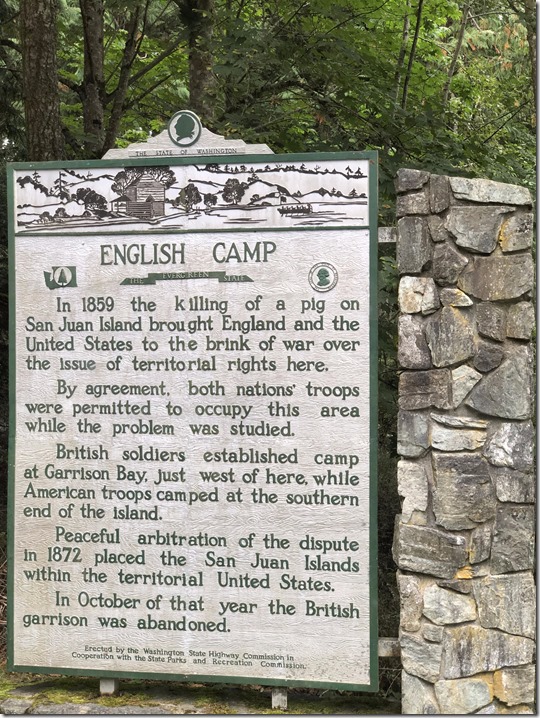 We passed an Alpaca farm before passing a local eccentric’s art. He keeps a fire burning in the strawberry in the winter so bikers and hikers can get out of the rain and warm themselves.  One time a fellow mooned the Jolly trolley.  He wasn’t there today. 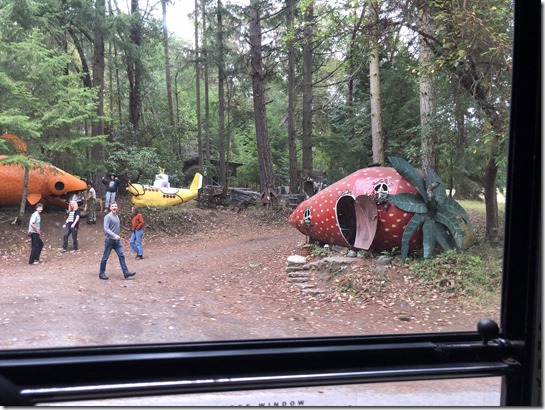 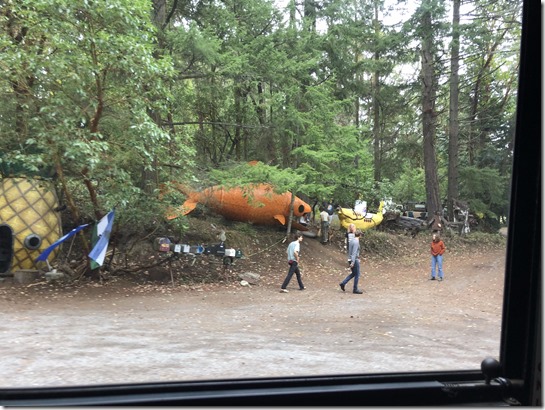 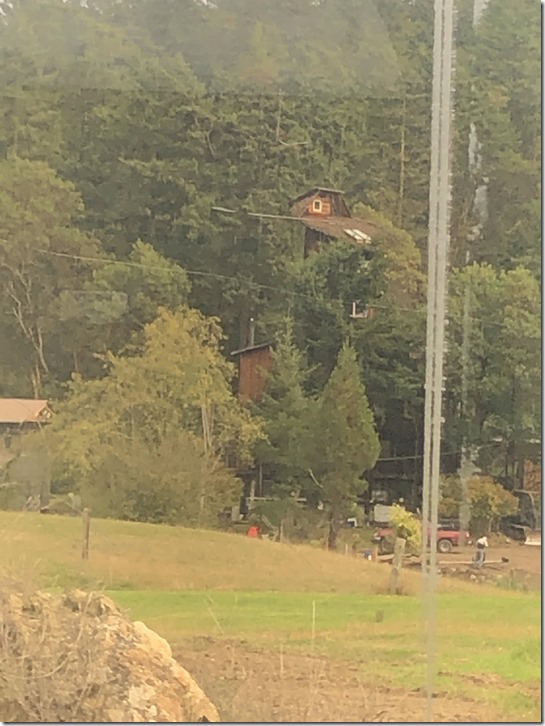 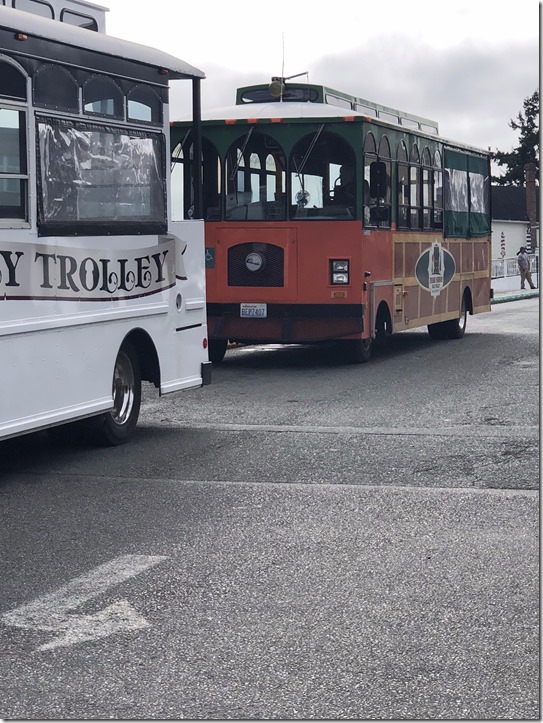 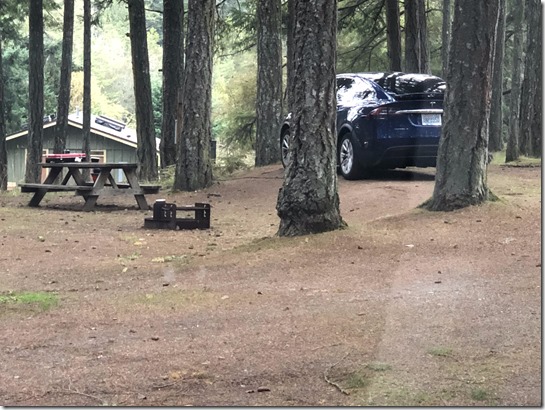 Lakedale Resort at the Lakes 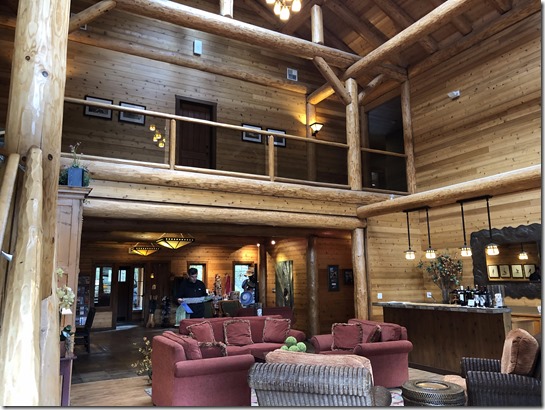 A View from the Lodge over the Deck 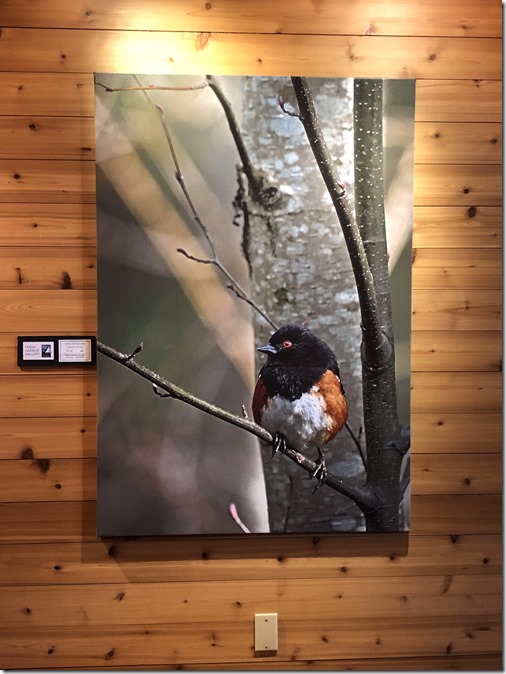 Local Art for Sale, A Towhee

We were up late for us, 8:28 AM.  Coffee and cereal for breakfast followed by shaving and re-organizing Li’l Beast.  A quick check of the ferry schedule and, “We could make the 11:00 ferry to Anacortes if we hurry.”  We chose to save Orcas Island for another trip, Whale watching and the weather conspired against us.  “I’d rather be sad that we didn’t go than sad that we did, got bashed around in the rain, and saw nothing.”  We packed it in and drove off for Friday Harbor, but not before dropping the DVDs and a chocolate or two off for Tracy. 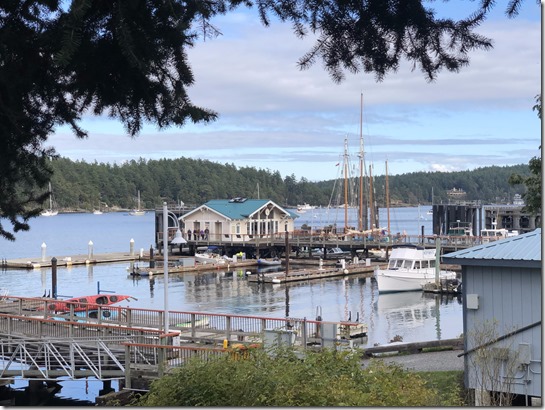 GPS took time coming on line.  I drove toward Friday Harbor hoping that the ferry access would be easy.  GPS started working as passed a ferry sign pointing to the right.  Two fellows were guiding traffic though the ferry was just starting to load.  “Go around the block to parking lot B and take row 8.”  I forgot the row 8 part but did find the parking lot.  When we arrived row 5 was driving away to board the ferry.  Then row 6 and row 7.  Ok, I approached the fellow directing traffic who said, “You’re in the wrong line.  Go back to row 8 and wait.  You are on standby.  We’ll get you on the 1:30.

Ok. Back around the parking lot to row 8.  I was behind one car.  Two or three others lined up behind me. We waited for a while.  I got out to chat with the fellow directing traffic.

“So I’ll be on the 1:30 ferry?”  “Maybe, you don’t have reservations, right?” “We were told we wouldn’t need a reservation.”  “On inter-island ferries, no reservation is necessary.  Going to Anacortes on a Sunday you need a reservation.”  Ok, we’ve got a 2:30 minute delay and more time wandering Friday Harbor. “We’ll be moving you down to the lower staging area soon.”  Cool.

We were directed down to row 8 in the lower parking lot and motioned to continue on.  We were boarding the ferry!  Li’l Beast was the next to last vehicle on the ferry.  There was a single car that staged behind us.  It parked 1 inch behind our bicycle rack.  One Inch! 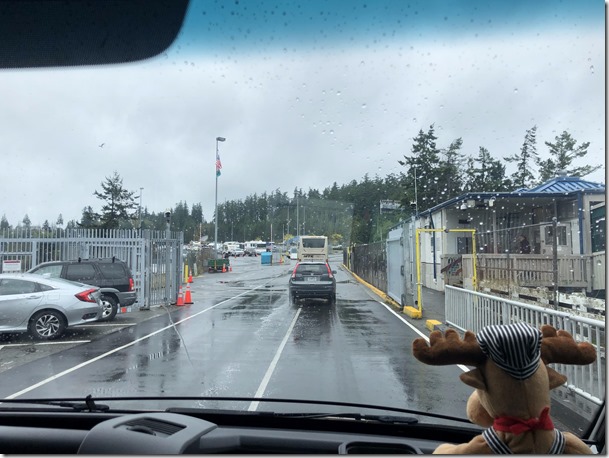 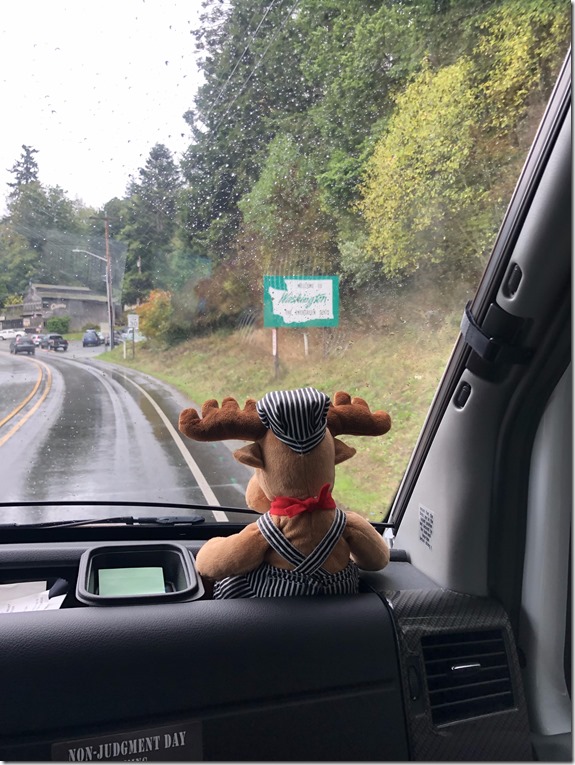 Cog back in Washington

We were lost in phase 10 and “we’ are arriving Anacortes.” Back in Li’l Beast the center row was flagged off the boat first!  I thought last on, last off.  This was a very neat trick.  There was no customs check as San Juan Island is part of Washington state.  And coolest of all? Washington ferries in the San Juans carge for east-to-west traffic, but not for west-to-east!  No ticket and no payment was required.

The thermistor I ordered last week should be waiting for us at RiteAid, Anacortes.  With that as a waypoint, we rode off.  Ride aid was a block down the road after our first right turn into Anacortes past a Safeway at the corner. The gals at RiteAid were very happy to help, but had never issued an Amazon pickup before.  It took a while to figure that the barcode the system wanted was the one sent in my email.  Moments later I left with the thermistor in hand.  Our ‘fridge has been quiet since the loud fan incident. I’ll replace the old thermistor if the fridge goes noisy again.

Back at Safeway for milk and fizzy water, we found parking was a mess.  An entire section was gated off and full of motorcycles. We noticed cycles everywhere going up and down the street,, parked along the street, everywhere. We parked in Anthony’s Seafood across the street.  I figured they wouldn’t mind as there were lots of space.  In “Yeah it’s not as rowdy as last year.  I guess the rain has a dampening effect on the festival.”  “What festival is this?”  “Oh it’s the Oyster Run.  It’s an annual motorcycle get together themed on oysters, music, and a good time.”

We drove around a bit to reconnoiter, found the main street was closed off except for motorcycles, and found no parking for blocks.  We parked back at Anthony’s and walked.  I counted 100 cycles parked on the main street in a city block.  There were easily a thousand bikes here.  Motorcycle clubs from around the US were represented, guys and dolls with their colors strutted the streets.  I never had a sense of danger.  For the most part these were “old farts” enjoying a day out with their wives on their hogs.  With this many people in one place “anything could happen”.  There was a strong police presence.  Groups of six walked the sidewalks with no swagger or attitude. Everyone was chill.   A gal walked by with a tray of fried oysters.  I bought two.  They were very good and equally overpriced. 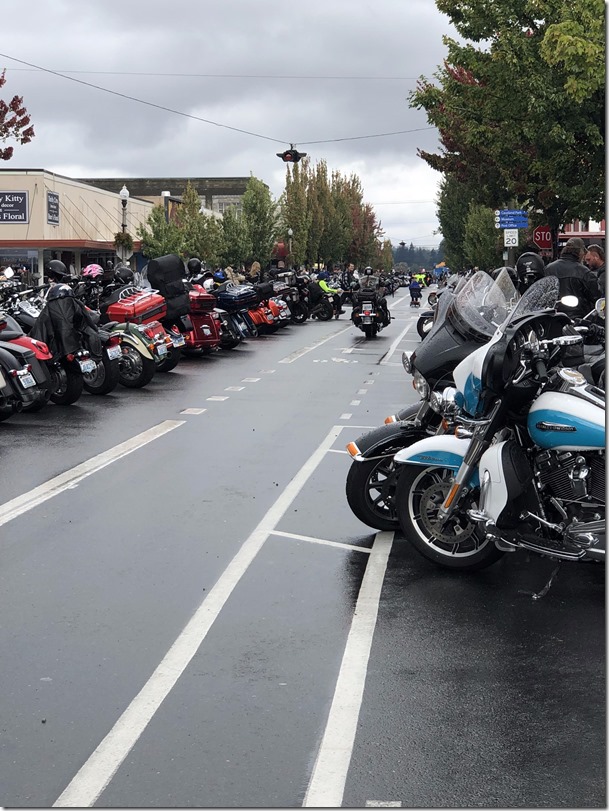 There were at least 100 bikes parked on each block, easily over 1,000 total 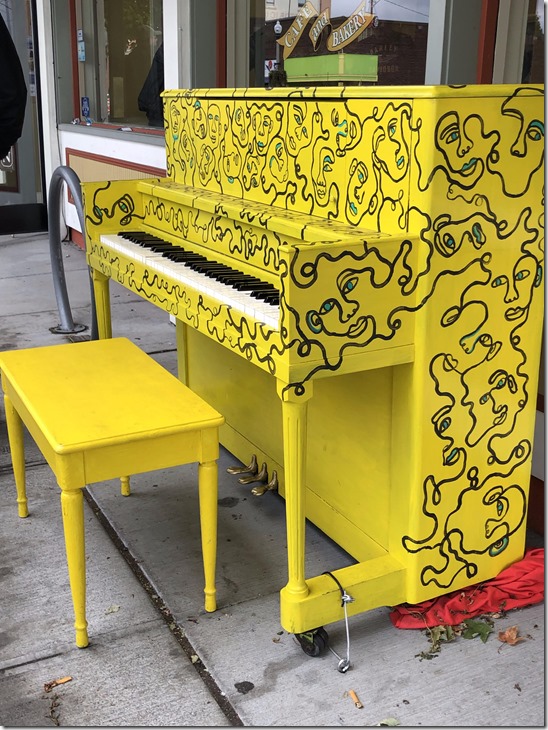 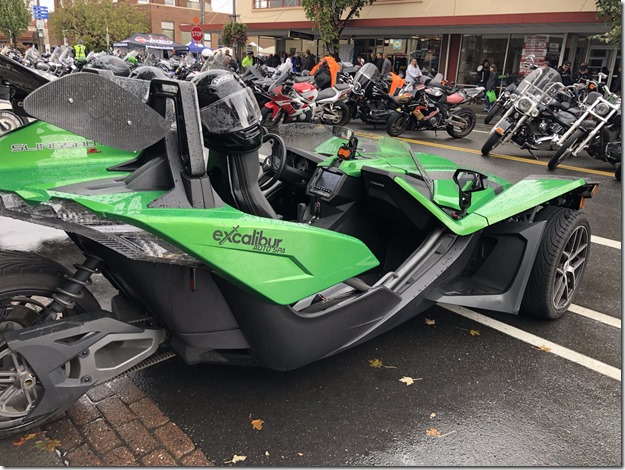 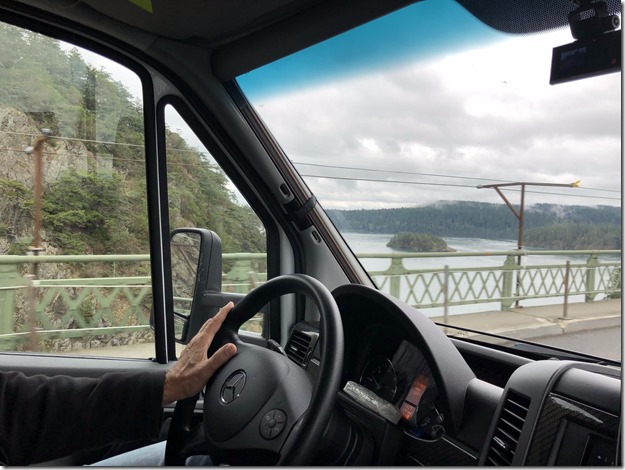 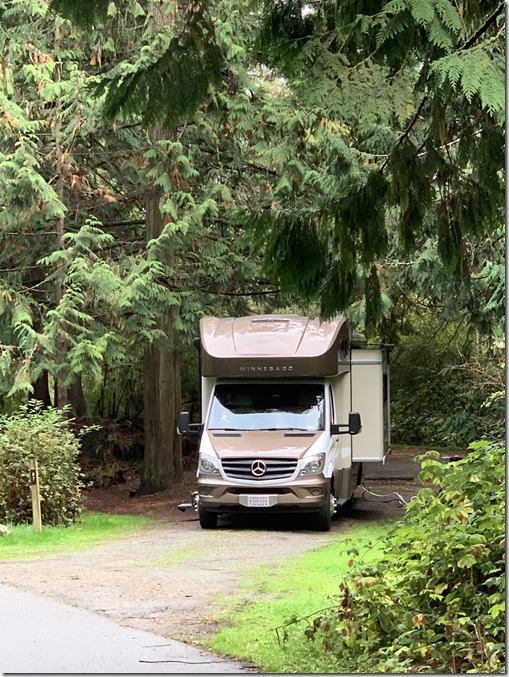 Our New Home, for a Day

Where should we go for the evening. Closest was Bowman Bay – Deception Pass State Park Campground with full hookups! That’s unusual for a state park in our experience.  I drove down a steep narrow winding road to a sign at the bottom that read “Campground Full”.  The campground hosts occupied the adjacent campsite, but were not home.  Crap.  Then we noticed a sign that said reservations can be made at the main park entrance 3 miles south.  Ok, we were off.  About 3 miles later we found a turnoff for Cranberry Lake- Deception Pass State Campground.  This must be the place.  We turned in remembering the time we visited this campground with Jerry & Michelle.

We drove past a “campground full” sign and up to the entrance. Trudy welcomed us. “You’re full?”  “No, I should probably take the sign in.  We have lots of sites open.  Drive around and find a few you like.  Some sites are reserved, if you pick a few you should pick at least one that’s open. The campgrounds in the 100’s to 200’s are near the water and have no hookups, the others have water and electric.”  we found number 87 in the “near the water” sites that has water and electric!  It’s a double site, but with the other half empty it’s perfect.  It is level front to back and side to side.  We have no satellite reception through the trees, but our High Def antenna brings in 14 channels.  We can select from QVC shopping and reruns of old TV series. 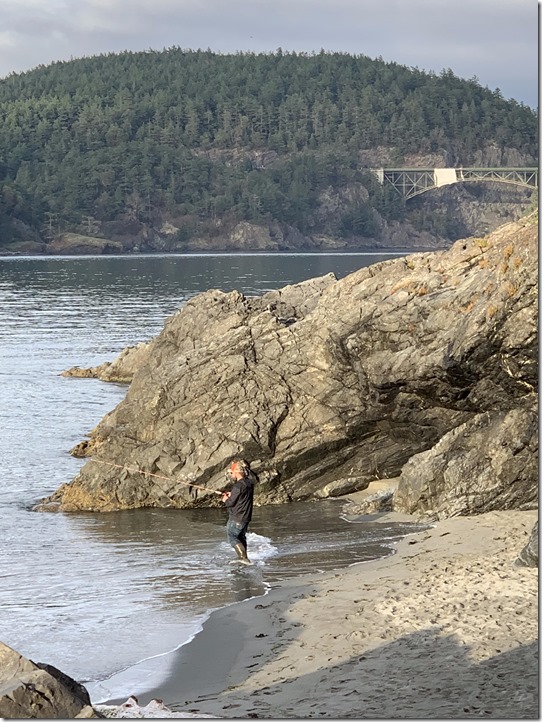 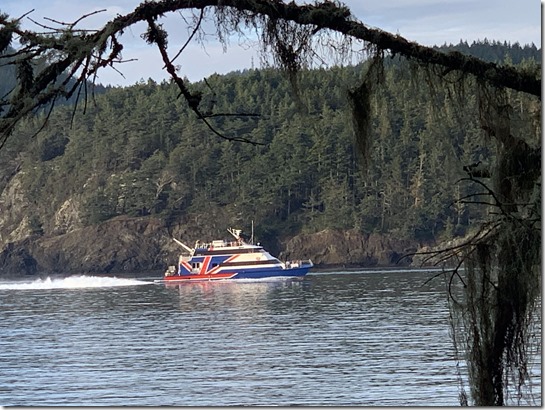 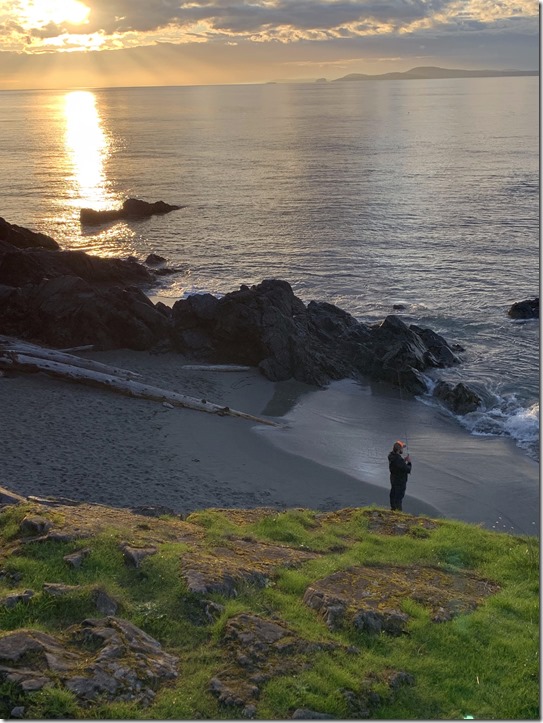 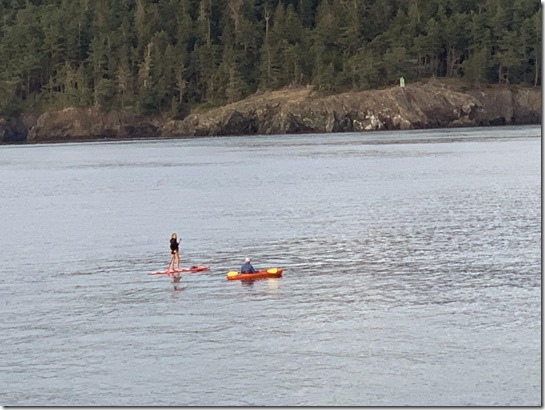 Ellen cooked a stir fry with Chinese noodles, delicious and followed by some of our cheese cake. Then we walked toward deception pass at sunset. The skies have cleared overhead with dark clouds to the south and west. A few fishermen had nothing to show for their effort.  The tide was high and going slack.  The best time to fish deception pass is during an ebb tide which impedes the salmon’s run through the pass.  They congregate in whirlpools waiting for the tide to turn then make their run through the pass.   Like the fishermen out this evening, I fish when I can in good conditions or bad.

As we headed back, a kayaker and paddle boarder passed the point together.   They seemed to be together; she would wait for him to catch up.  They made for a great photo with the sunset beaming on them.

Back home, we’ve settled in.  There’s a 50’s movie playing on the TV.  I’m typing away, and Ellen is 50/50 between the movie and her smart phone.   The movie seems to be about a woman who is either losing her mind or who is sane and everyone else thinks she is crazy.  50’s female drama is so very over the top.