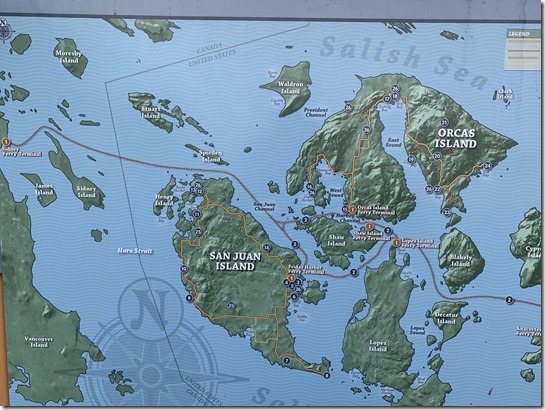 Lakedale has changed owners a number of times since it started in 1969. The three lakes surrounding the campgrounds are man made.  The lodge is well designed and inviting.  This is undoubtedly the best campground on the island.  Though the general store is small, it is well stocked.  Tom likes to talk about the San Juan Islands.  He’s a wealth of information and will few visitors off season, he’s also a bit bored.

In the lodge we met Tracy, and thanked her for her helpful phone call the other day.  “Oh that wasn’t me.  That was probably Sherry.”  While we were talking, a bus decorated as a trolley pulled in and around the lodge. “What was that?”  “Oh, that’s the Jolly Trolley. It goes around the island.  For a fee you can hop off and on at various stops.”  It’s $10 per person.  Why not leave the driving to someone else?  “Does the bus take credit cards?”  “No.”  I only had $14.00 in cash.  Tracy offered to lend us $20, “You can pay me back tomorrow.  Here’s a card for a taxi.  You may need it if you miss the last bus.” With a photo of the bus itinerary in hand, we set off to walk the campground. 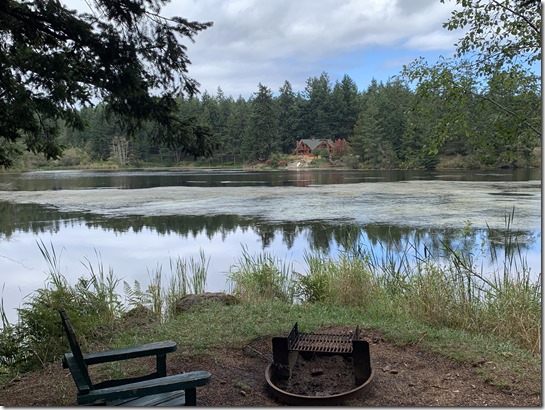 Lakedale Resort is a very small campground. It has a few log cabins that sleep 8 with one that sleeps 12, a number of yurts, a remodeled airstream, and lots of tent sights in addition to the 5 RV sites.  In season I’m sure this place is packed with families rowing and fishing the lake. 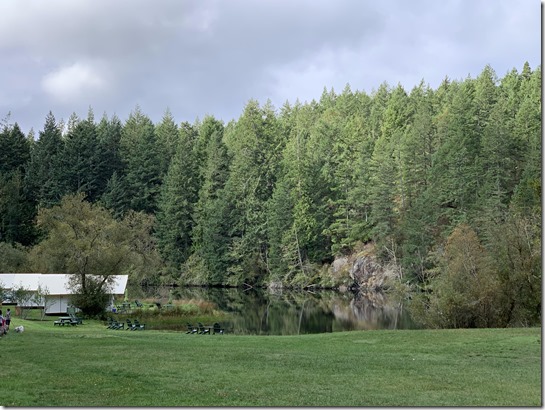 One of the Three Man-made Lakes

There’s a wedding this weekend.  The owners of the sculpture garden’s daughter is getting married.  On our walk we met a couple who will attend that wedding.  He is originally from Croatia.  She is originally from New York.  They live in Toronto and love the outdoors, which is why they’re staying at Lakedale.  “Wherever we go in the world, we look for hiking trails.  There are some fantastic places to hike that nobody knows about. Crete for example has the deepest gorge and a great hike. Then he mentioned Madeira. “Madeira has some wonderful hiking.  It’s fabulous.”  He also mentioned the coast of southern Portugal as a must visit.  Next they’re going hiking in Spain.

we’re taking a tour of Morocco next spring.  I’ve added a week’s stay in Funchal, Madeira. We’ll be staying at a hotel overlooking the port city, but we will also do walks and hikes into the rugged hills (mountains) of Madeira.

Wherever we go in the U.S. we meet international travellers, like ourselves. Travel opens the heart and mind to the similarities we humans share across cultures.  While different, we all want similar things for our families and friends. Legal immigration in the U.S. is broken.  I’ll leave it at that. 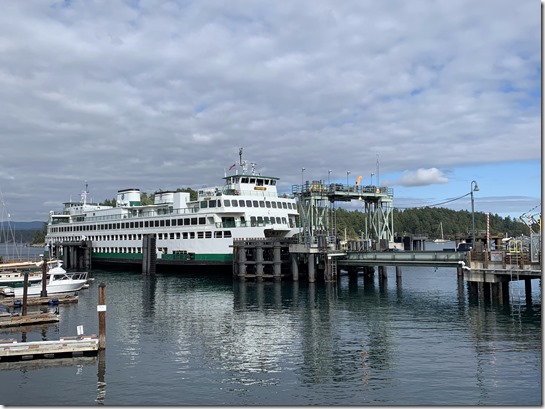 We took the Jolly Trolley around the island to Friday Harbor.  We passed the sculpture garden, Roche Harbor,English Camp, Lime Kiln Park, and the Lavender Farm along the way. Roche Harbor is beautiful and worth a visit.  I had planed to take a whale watching tour or a kayak adventure from Roche harbor, but I’m half way through a cold.  Even in great weather, going on the water with a cold is not a good idea.  English Camp has a huge plaque about a war between the English and Americans that almost erupted over a pig.  I’m curious, but with no internet cannot provide more details.  There’s an American Camp elsewhere on the island that has a similar plaque.  Lime Kiln is “THE PLACE” to see orca from the shore. We considered dry camping near the park, but opted for Lakedale.  The Jolly Bus driver said, “When we come around the next turn, if you can see a number of whale watching boats, you’ll see whales.”  Great, but as expected there were no boats and no whales.  The consensus is that the whales are further up islands.  We San Juan Island tomorrow.  We can go to Orcas Island for whale watching or to Anacortes and continue on to Idaho.  With no whale sightings and rain predicted, we’ll probably head to Anacortes. 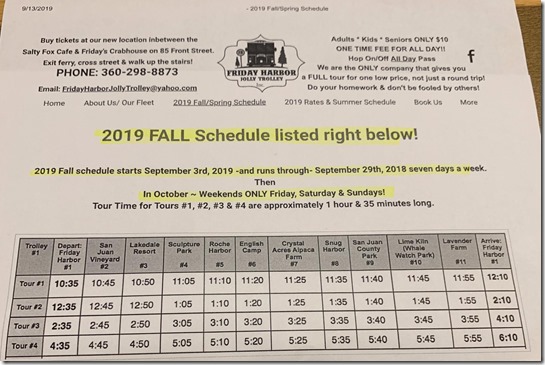 Friday harbor is quaint.  Like Sidney, it has one main street that runs to the sea and a wharf. Friday Harbor has a large marina to the left and a number of coffee shops, restaurants, and novelty shops.  We ate at the Downrigger, right on the water. Though there were people in shorts and Ts out on the deck, we opted to eat inside.  It was much warmer with the same view through wall to wall windows looking out over the bay.  We had a pastrami sandwich and burrata dish.  The seafood didn’t appeal for some reason. Our waiter said there are ATMs nearby and a Wells Fargo a few blocks up.

Two outfitters in Friday Harbor provide whale watching tours and kayak tours.  They were not busy.  We stopped into a bakery and took two pieces of cheese cake with us.  I took some cash from Wells Fargo to repay Tracy, and we headed to the last Jolly Trolley departing Friday Harbor today.

Tracy was closing the lodge when we walked in.  We repaid her $20 with thanks all around.  “I trust you guys” she said letting us take two DVDs without deposit.  We’ll give her one of our caramel chocolates tomorrow as we leave.

“Back home”, we had a bit of cheese cake and coffee  It took a bit for me to get the DVD working.  We have one less power plug for our devices.  I’ve also got a 3-input HDIM switch that “usually” works and the audio/video cable to the 2nd TV is disconnected.   It’s something I’ll deal with later.  I’ve said that every year.  When we get home it’s out of mind and does not get fixed.  Anyway, The Northwest Passage is a long historical piece that covers the history of adventurers first attempts to find the passage to what climate change has done to the north west.  It’s fascinating.  “The Boy in the Striped Pajamas” was a surprise.  It’s a good movie, but the ending is tragic not very uplifting. It’s not a great bedtime film.

Rain is predicted for tomorrow.