We stayed at Friendly Beaver Campground near New Boston.  The temperature dropped quickly after dark.  I pulled the water hose inside and ran the tank heaters overnight.  The temperature had dropped to 27 degrees around 8 am.  The sky was overcast and threatening rain.  There are any number of routes we could take to get from New Boston to Charlemont Massachusetts on the Mohawk Trail.   Ellen and our GPS agreed that we should go south through Milford NH. 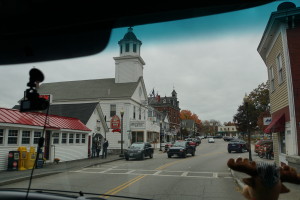 Milford is a much larger town than we had expected after seeing New Boston and other “towns”.  Yes, it was cold and cloudy, but we had to walk the town and perhaps have lunch at a cafe. 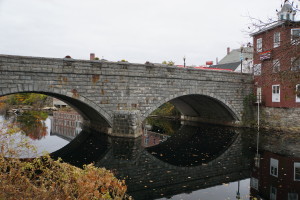 Main bridge over the Souhegan River 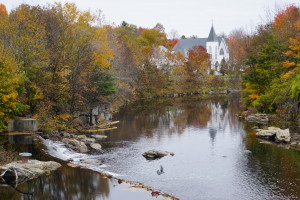 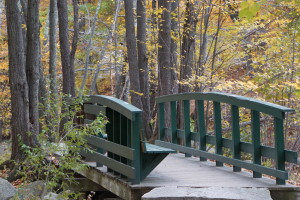 Most small towns in New England were founded on rivers or lakes.  Milford is no different.  It sides astride the Souhegan River.  If you walk across the bridge heading out of town, there is a wonderful park to your left. We walked the park, then went back into town. 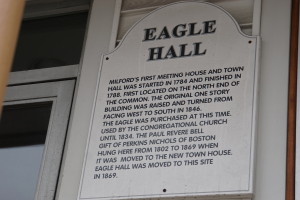 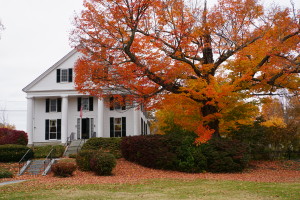 Local news reported that the foliage in the Merrimack Valley was at peak now.  The foliage turned a week or two later than typical this year.  The trees turn color when the temperature drops near or below freezing.  Record high summer like temperatures three weeks ago delayed fall.  We are now in the grip of a cold front pushing in from Canada.

We held off choosing where to have lunch until we had walked the town oval.  We happened by “the best pizza in New England” and had to stop in.  It was empty but for a couple waiting for their order. Anthony walked out from the back and asked, “Can I help you?”.  we talked about their pizza, the shop, and the town a bit.  Ellen noticed an “Eat in or take and bake” sign and asked about taking a pizza to go.  We settled on a fresh tomato pizza with added red peppers and pepperoni.  Anthony said he would hold off making the pizza for 45 minutes and that we could pick the pizza up later.  No need to pay for it now!   I won’t be here then, my sister will make your pizza. Great!  Off we went in search for lunch.  The pizza would go in our ‘fridge for dinner later. 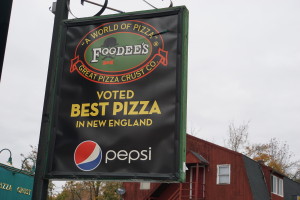 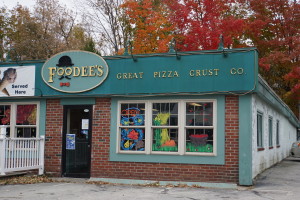 The Best Pizza in New England!?!

We looked for a prominently advertised Union Street Grill, but couldn’t find it.  Ellen stopped two women and asked about the restaurant.  One pointed out the location, almost out of town, the last building on the left.  Then she said, ” we’re going to the diner for lunch and they have good.”  We parted ways and found the Union Street Grill and noticed only one couple at a table. We decided to skip this one and headed off to the diner.

We ate at the diner, though the tavern below the diner and under the bridge would have been a better choice.  They’re co-owned and share the same menu.  The diner is a typical 40’s place where the tavern has a warmer vibe.  Oh, and the tavern has a full bar. 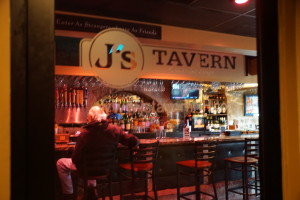 The Tavern below the Diner

Back at Foodies, Abigail made the pizza for us while we talked with the owner.  He had owned two pizza places, but bad management at his other store forced him to close it.  He has the one shop.  The pizza arrived, looking great heaped high with cheese.  Then Abigail realized she had forgotten the pepperoni!  She took the pizza back and returned with the pizza piled higher with cheese! It was huge.  Our conversation with the owner wound down and I made to pay for the pizza.  He said, “I thought you had paid already!”.  “No.”  He then gave us two free sodas: one Lime Rickey and one Root Beer.

Heading out of town, we passed a still pond and we took these photos.  There’s a small commemorative park alongside the pond. 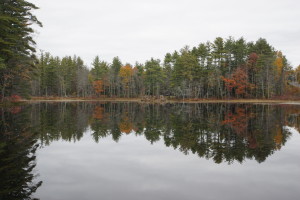 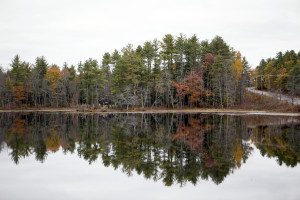 At a Small Park aside a Pond South of Milford

Driving along there were cones on the road and signs stating “Beware Of Runners”.  Further on, Ellen saw a covered bridge to our right.  A great place to U-turn appeared on my left and we headed back to find Potanipo Lake in Brookline New Hampshire.  There’s plenty of parking near a boat ramp on the lake.  The covered bridge is over a stream that runs into the lake.   There were a number of people milling about that appeared to had just finished running a race.  There was a cone at the end of a smaller bridge that served as the turn-around point for runners.  As we walked to the bridge a number of runners turned around the cone and ran off.  Ron asked a woman, “How long is the race?”  She said, “one hundred miles, or whatever you want to do!”.  “how far are you going?”  She answered, “A measly forty five miles.”

It was a chilly day for a race…. 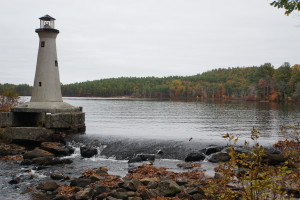 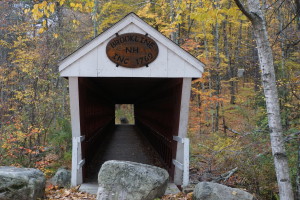 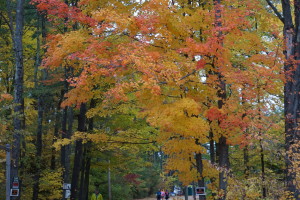 Foliage at the Lake

Some time later we drove into Massachusetts.  SR 31 through New Hampshire is a wonderful road.  It’s smooth with minimal bumps or repaired potholes.  Not so for the first dozen miles or so in Massachusetts.  The road was horrible with an extremely high crown and bumps, shimmies, and shakes.  On par with roads in Indiana.

Some miles later the road smoothed out, but the high crown remained for much longer.   We skirted Fitchburg taking SR 2 west toward Miller’s Falls, Shelbourne Falls, and the Mohawk Trail.

As usual, most of the campgrounds along our route were closed.  Even those listed as closing in late October had closed.  There was one campground that listed November 1 as their last day open.  Ellen called and yes they are open and yes they have sites for a 24 foot RV.  We continued on SR 2 to Charlemont Mass. and the Country Aire Campground.    Art and Lisa greeted us and checked us into a site with clear view to the south, cable, water, and electricity for $25.  We opted to stay two nights.  There are a number of small towns along the Deerfield River to explore.  We’re not due to meet Ed O’Neil until Monday and we’re less than an hour away.

Setup went quickly.  We pre-heated the convection oven to 375, placed the pizza directly on the glass carousel, and popped it into the oven.  Instructions suggest cooking for 12-15 minutes until the cheese freckles.  It took longer than 15 minutes, but finally sometime after the cheese melted it began to freckle.  It was tricky getting the pizza in the oven and again getting it out, but all went perfectly.  The pizza was perfectly done.  The crust was crisp and crunchy, the toppings cooked through and very hot.  It was a great pizza.  We’ll cook many more in the convection oven.

That night it rained cats and dogs.  The temperature hovered around 44 degrees. We were snug in The Beast.  We ushered out another Wonderful Day, looking forward to our next day’s adventure. 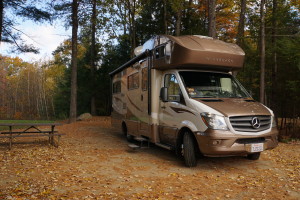 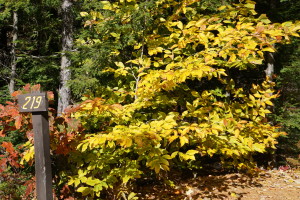 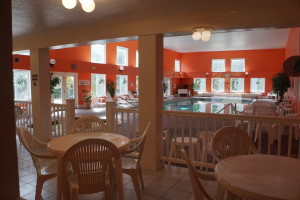 Our goal is to arrive Ed O’Neil’s place on Monday.  The distance is short.  we thought we’d take some back roads through New Boston and on to the Mohawk Trail before dropping gown to Amherst. 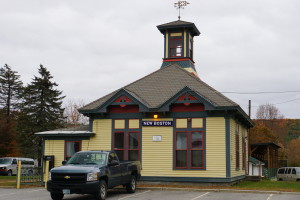 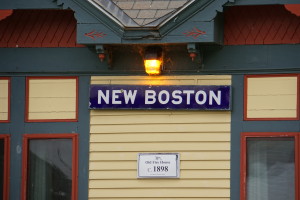 From Meredith Woods we took SR 104 west to I-93 south.  Both roads are smooth and a great ride.  104 is a two lane road with little traffic. From I-93 we took SR 13, SR 77, SR 114, and SR 77.  These roads are two lane with surprisingly little traffic.  A bonus, they’re in very good condition and go through beautiful scenery; over rivers and along creeks and streams, through very small towns.

We called Robert at Friendly Beaver Campground, our stop for the evening, to make a reservation.  Ellen asked if there was a market nearby and Robert said he had some supplies at the store: eggs, bread, milk, some meat.  OK we’re good for the night we celebrated and headed off to find Friendly Beaver.  Again the GPS miss-located the campground and we made a few U-turns before finding it.  It is about a quarter of a mile further up Old Coach road than the GPS thinks it is.

While checking in, I asked if they could recommend a local restaurant.  I had not seen a single eatery driving in!  “Yes, you’ll find Molly’s Tavern if you drive back down Old Coach Road and go south.  That’s a left.  You can’t miss it.”  We had come in from the north.   The food the store stocked was not super fresh.  We opted to drive to Molly’s Tavern.  That was a great decision.

Molly’s Tavern sits on SR 13 south of New Boston and you cannot miss it.  There are two buildings, the restaurant and the tavern. Walking from The Beast, the scent of burning wood filledl the air. We stopped a waitress as she was entering the tavern and asked what the difference was between the two.  They offer and identical menu, but the tavern has a bar.  if you order drinks in the restaurant they’re brought from bar.  Then she said, “Oh and the Tavern has a fireplace.  The restaurant doesn’t.”  It was cold and the thought of sitting by a fireplace won out.

We ordered the specials: Ellen, the stuffed jumbo prawns; Ron, the filet with asparagus.  The food was good, but sitting by the fireplace was wonderful.  Over the course of our meal, the Tavern filled.  This was clearly the place for the locals to go for a fun time out on a Friday evening.

We drove back up the hill and settled in for the evening.  Site #206 has a clear view of the south.  we had no trouble with sat. reception.  Bill Maher is on vacation; Real time was a re-broadcast of Bernie Sander’s interview et. al.

The next morning we saw just how many others were camping late in the fall in New Hampshire.  The campground was not full, but it was far from empty. The 200’s section was about half full.  The beauty of camping in the off season in New England is availability.  You never have to worry about getting a reservation at a campground.  It’s the number of campgrounds that have closed after Columbus day that is the problem.  Still, we have been able to find an open campground almost everywhere we went.  The one exception was south of Portland Maine where we resorted to an Elks Lodge and Boondocking and even that was not a hardship. 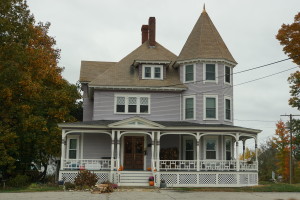 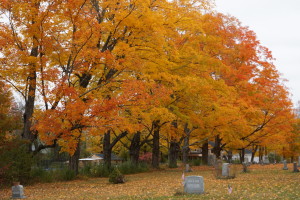 Along the way south from New Boston, NH

New Boston was a trip.  It is a very isolated sleepy little town, but it is beautiful. We were happy to push on into Massachusetts the following day.