The last time we tried this, heavy snow over the very first pass turned us back.

We awoke at 5:35 AM in pitch darkness.  Stars were out.  The sky was clear and the morning felt abysmally cold, though “only” 31F.  We made coffee, put “everything” away, pulled the push-out in, brought the Antenna down, disconnected, and drove off.  We left at 6;25, not a stellar departure, but good  enough.  “Next time we’ll setup to leave before bed.”

We stopped briefly at the park entrance and headed up the hill.  To get to Lamar Valley take the first left in Mammoth onto Grand Loop Road toward Tower.  Temp when we left Gardiner was 31 F.  As we climbed from Mammoth it dropped to 26 then 24.  At tower the road to Lamar Valley branches left.  We were beginning a climb with a drop off to a narrow field and trees to our right when Ellen nearly shouted, “Bear” , then ‘Grizzly”.  First light was breaking over the ridges.  We could see clearly, yup, a grizzly.  It ran across the road maybe 50 yards ahead, scampered down to and across the field, and disappeared into the tree line.   I immediately stopped right on the road at the first sight of bear, well before it crossed the road.  The car behind us also stopped.   Our sighting was on the rise to Slough Creek.

What Happens When You’re Unprepared for “the shot”

From Slough Creek, the road runs along the Lamar River, through a canyon.  It rises through pine trees curving left and right, then descends into and rises from a small valley (that could be part of Lamar Valley).  It then rises and drops into a stunning vista. Lamar Valley is a long expansive plain of grasses and sage, cottonwood and aspen groves along the Lamar River, and evergreen trees rising up the slops in the distance.  The sun had risen, but was still below the ridge line.

We stopped at the first paved pullout on the valley floor and scanned the tree line.  Nothing.  We skipped the next few turnouts.  One turnout ahead was busy.  Ellen and I both thought a. We’re too late and b.There won’t be parking for us.  I slowed to a crawl and pulled into a space big enough.  I had to pull forward barely scraping a rock with the left suspension. OOps.

There was a small cluster of people, three or four with spotting scopes trained on the sagebrush.  “What are you seeing?”  “Wolves, there are four of them in the sage brush just behind the near short tree right there.”  And there they were. There were four gray wolves, two cavorting about and two more interested in bedding down.  A while later two more moved in from the left, a white and a gray.  While we watched a covey of grouse appeared in the foreground and jumped about.  Ellen noticed a pair of bald eagles in a cottonwood by the Lamar River. Two bison ambled by in the background.  Back to the wolves, a seventh ambled in from the left.  Then a fellow who had been on the hill behind us mentioned there was a wolf coming in from the right near the cottonwoods.  He/she was close enough to see without glass.  Under the spotting scope we saw a large, well fed coyote.  Just as I focused on the eagles to take a “phone-scope” pic, they flew out of the tree.

The wolves disappeared into the grasses and sage.  The eagles flew off.  The bison had wondered to the far right.  We were about to move on when a herd ( harem, herd, group, flock? ) of prong horn ( antelope, deer, sheep ? ) charged out of the pine trees and ran at high speed through the sage and grasses.  Seen in a full gallop, these are magnificent animals.  They are very fast.  In no time they had run out of sight. 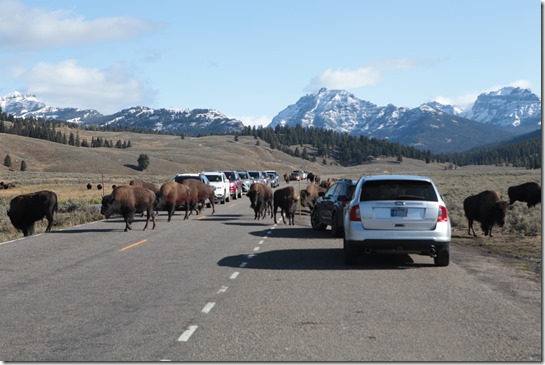 We drove further down Lamar Valley, slowed then stopped for a herd of Bison, then turned back.  We ate at Mammoth Dining Room, which has a limited, way overpriced menu; then headed to Gardiner for more hand warmers, cough drops, and whatever else we might need/want. 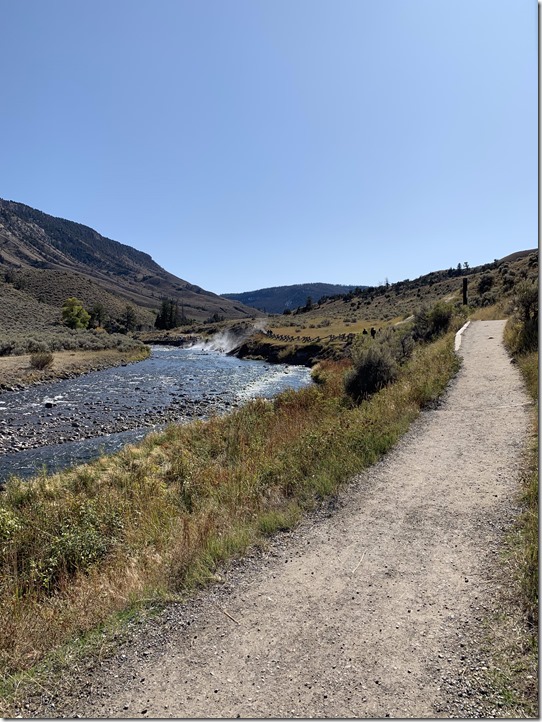 Along the way we pass the turnoff for Boiling River. We’d seen crowds at the river each time we passed.  Yesterday we tried to stop for a “look-see”.  The two parking lots limit size to 20’ and road side parking was full.  Today it was nearly empty!  We had no trouble parking and walked the quarter mile to the “boiling river’”. It is a spot along the Gardiner River where hot springs flow into the cold river.  People have piled rocks in circles creating warm bathing pools that go from cool, to warm, to hot.   Ellen soaked her feet while I watched our gear.  The trick is to go with a bathing suit, towel, the clothes on your back, and little else.  We passed one woman walking back wearing a resort-style terry robe.  Smart.  We’ll go back in the next day or so better prepared. 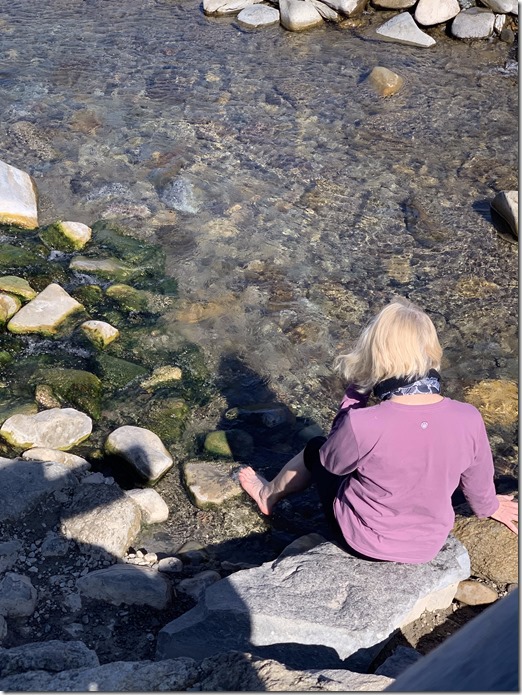 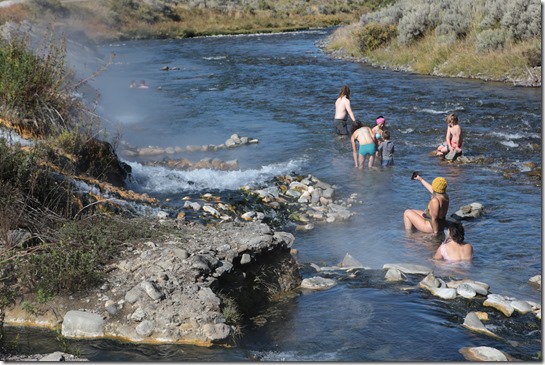 Can You Spot the Snake? 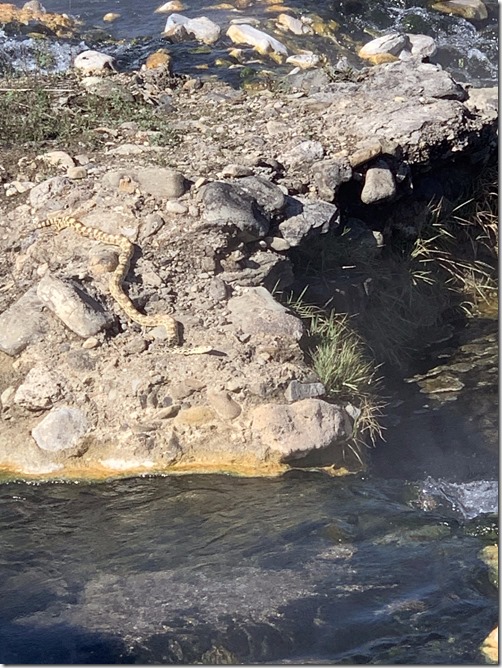 That Bull Snake was remarkable.  It slowly extended its head and maybe 6” of its body over the hot water.  Then it dipped just touching the water and rose back.  It did this three times. Then it got brave and submerged into the water.  Like a baby touching a hot stove.  It snapped back in a U shape and buried its head.  One Smart Snake, assuming it didn’t badly burn itself.

Finding specialized equipment in Gardiner off season is practically impossible.  The shops/outfitters who would carry such things are all closed.  Every last one.  Looking for river shoes, a local recommended we try Parks Fly Shop.  “They’ll have stuff for wading for sure!”   Well, no, they don’t.  In fact the friendly guy manning the counter said, “You don’t want to go wading in river shoes.  You’ll break your toes.” He went on to say his pinkie sticks out like his thumb, he’s broken it so many times.  “Don’t wear river shoes and no we don’t carry any, sorry.”  He was not trying to up-sell us.  He was seriously saying “don’t do it”.  We’ll use our old sneakers instead.  As for a fly fishing outfitter and based on what I know about fishing, I can very highly recommend these guys.

We’re back “home”.  Water, electric, and cable are all connected.  This day has tired us out.  Jessica came by with her one year old, June, to settle up.  They’ll stay open through the 15th, though the water will be shut off tomorrow.  Water will be available near the office after that.  Yes, we can use the sewer, just run a bunch of water.

Rocky Mountain RV Park is outside Yellowstone Park.  We have to drive a bit more to access Mammoth and other points of interest.  However, unlike campgrounds within the park, we have electricity, sewer, and water here.  Then too, we use our Senior Pass for free access to the park.  We go in and out of Yellowstone as often as we want and at no charge.

Say Hi to Curtis, Jessica, Payton, and June when you visit.

Today was a cold and gloriously sunny day. Low temp going to Lamar Valley hit 24 F.  High temp today hit 69 F.  That’s a huge temp swing. Tomorrow should be even better than today.   Wednesday will be tough.  We’ve heard temps as low as 1f overnight with sub freezing temps for 24 hours.  Ouch.  I expect we’ll be tethered to electricity  all day Wednesday to run our tank heaters.  They would drain the batteries in under 6 hours.  Running the generator overnight is not an option.  So an electric hook-up is necessary.