Today was filled with birds, iguanas, small islands, and more birds. We had an early morning dry landing on South Plaza Island and walked a loop around the small islands’s perimeter. South Plasa is a small flat island covered with a coral/red succulent plant, numerous land iguana, swallow tail gulls, frigate birds, and sea lions. The far side of the islands is a rocky cliff which slops down to the water on the near side. Hundreds of birds were nesting, perched in the cliffs, or flying about below or around us. The contrast between yesterday’s excursion to the town and people contrasted dramatically with today’s small uninhabited island, making to day special. Busses, noise,, and tortoises yesterday, zodiacs, quiet, and wildlife today. The contrast was not lost on us.

During lunch we left South Plaza for Santa Fe Island. Santa Fe was a wet landing and a walk on a broken lava and sand trail.

Here are a few photos taken on South Plaza and Santa Fe Islands. 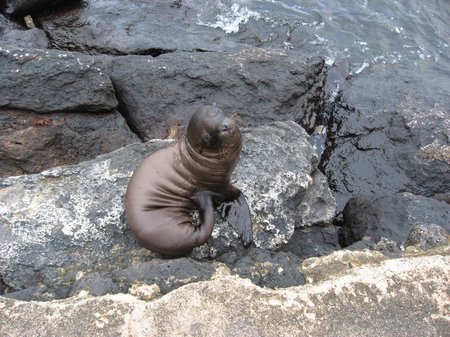 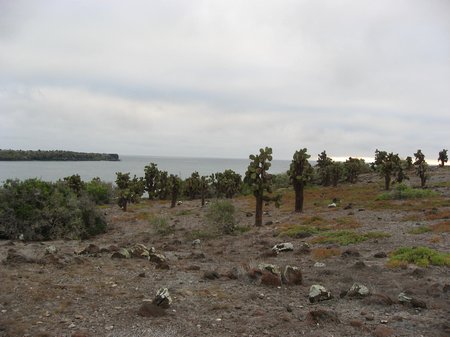 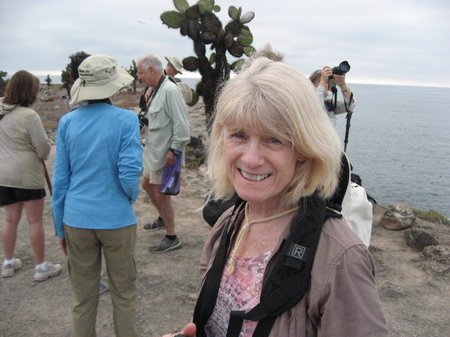 Ellen and Some of our Group 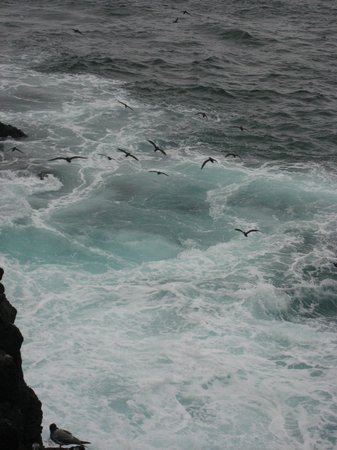 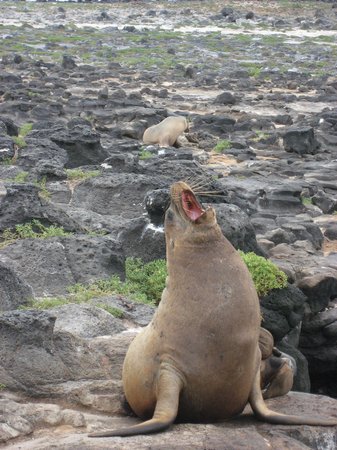 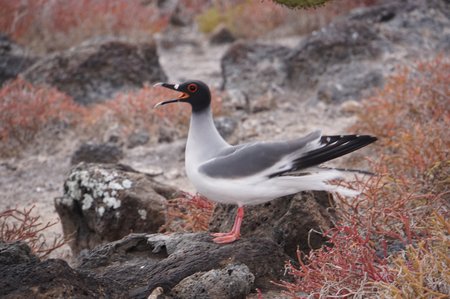 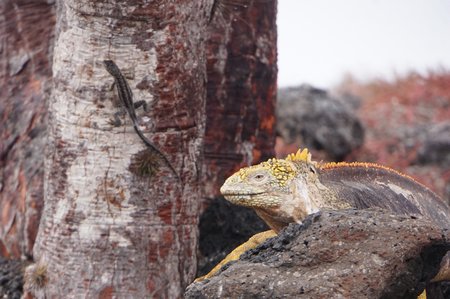 A Lava Lizard and Land Iguana 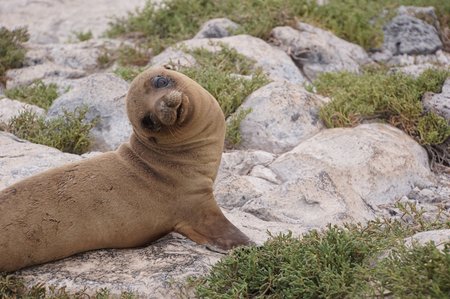 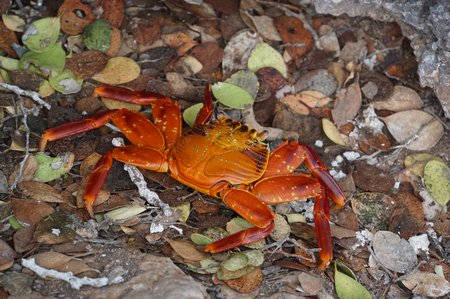 Sally Lightfoot Crabs are Quite Colorful 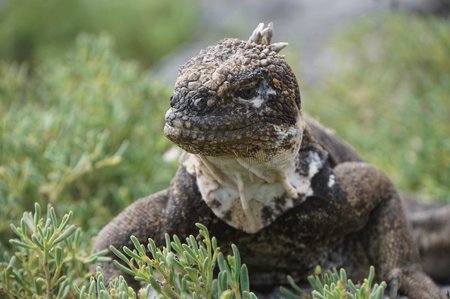 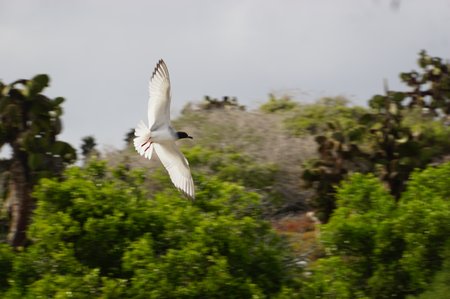 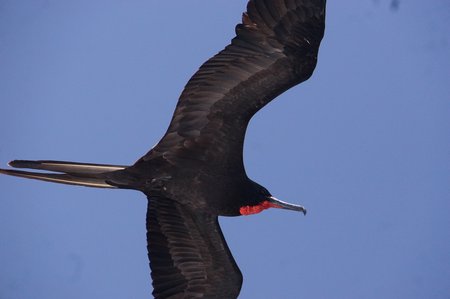 A Flock of Frigate Birds Followed the Islander 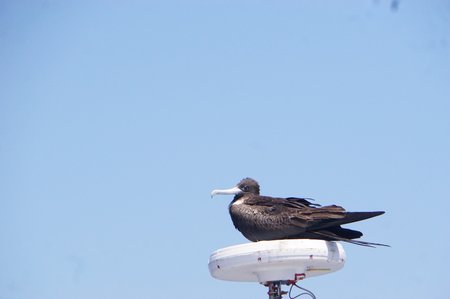 Some Took the Easy Way 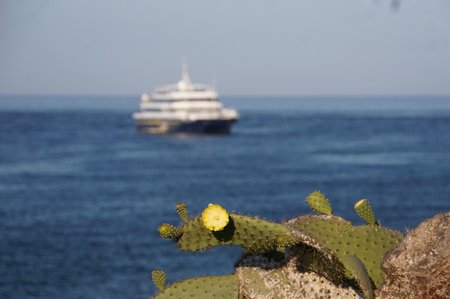 A Flowering Cactus, the Islander in the Distance 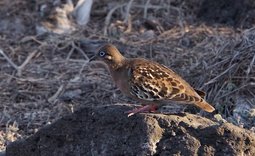 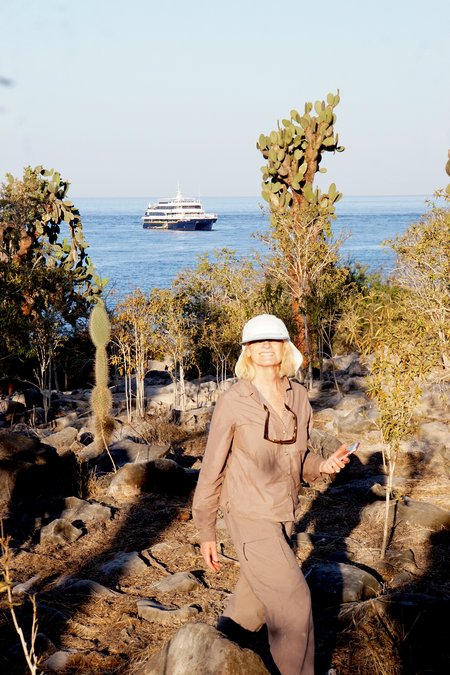 The Galapagos Ellen, a Rare Bird 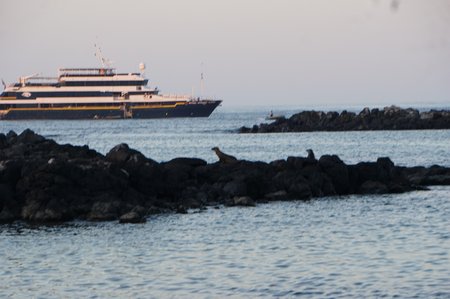 Sea Lions and the Islander 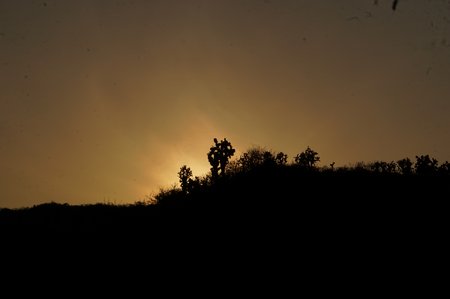 We disembarked at South Plaza Island very early this morning. This small island, which is in fact just some few hundred yards long, was once part of the ocean floor. It is the product of a volcanic uplifting. The amount of wildlife found in this paradise is overwhelming. In addition, the marine landscape is as beautiful and striking as its inhabitants. Huge cacti were surrounded by a carpet of red vegetation where colorful Galapagos land iguanas were seen everywhere making it look like a real life painting.

Further inland there is a spectacular cliff side where many sea bird species can be observed either flying around or resting. Once we arrived to the highest point to walk along the cliff, we found the best site to watch sea birds in action. Galapagos shearwaters were skimming the ocean surface looking for food while Nazca boobies were gliding along the cliffs. Beautiful Swallow tailed gulls were seen either flying around or taking care of their hungry white youngsters

After this magical morning visit we went back to the ship to join a presentation. Naturalist Jonathan Aguas talked about the Human History of the Galapagos Islands.

After lunch we headed to Santa Fe Island. In this location there are remarkable sceneries where volcanic cliffs are covered with giant prickly pear cacti. Some guests opted to go kayaking while others went snorkeling. Waters were relatively calm today and many colorful reef fish species were seen, including many rays, Galapagos sea lions, some sea turtles and some sharks.

Once everyone was back onboard we put on our walking gear to explore Santa Fe Island. The landing beach is home to a Galapagos sea lion colony. The rocky inland trail led us to encounter a couple of pale brownish green land iguanas, the famous Santa Fe land iguana (Conolophus pallidus). This latter species, as its name implies, is only found on this small island and nowhere else in the Galapagos! It is not only endemic to the Galapagos, but just on this island.

After recaps and dinner we had a star gazing session on the top deck. A clean sky gave us the opportunity to observe an impressive celestial starry night right on the equator.

Once we were all in bed, I’m sure we all could not help but think about the various feelings and memories that this day brought us, so strong that will remain in our hearts and minds forever.

Carlos Romero·Expedition Leader
Carlos was born in Quito, Ecuador and grew up in Venezuela, where he lived for many years near the ocean and later the rainforest. He returned to Quito to study biology and specialized in the fauna of Ecuador. His main field of study was zoology with an emphasis on vertebrates. He has a doctorate in biology and a master’s in ecotourism and natural protected areas management. He designed a new curriculum for the largest university in Ecuador, the Central University— a masters in environmental management and administration of natural protected areas. Carlos has also taken part in various scientific projects and expeditions with the Biological Sciences Department of Quito’s Polytechnic University. He has published several scientific papers, including one about the bats of Galápagos and one about the vampire bat of mainland Ecuador.