Out of media player. Press enter to return or tab to continue.

Media captionProtesters turned out in Florence over the Italian referendum

Hundreds of hooded anti-government protesters have clashed with Italian police in Florence as they demonstrated against a constitutional referendum put forward by Prime Minister Matteo Renzi.

They threw smoke bombs and firecrackers at police, who responded with tear gas.

The bill aims to reduce the role of the Senate and cut powers of regional governments. Opponents say it will lead to an excessive concentration of power.

Mr Renzi has vowed to resign if he loses the 4 December vote.

He says the plan will streamline the Italian parliament, cut costs and give Italy more stable government.

But recent opinion polls suggest voters will reject it. 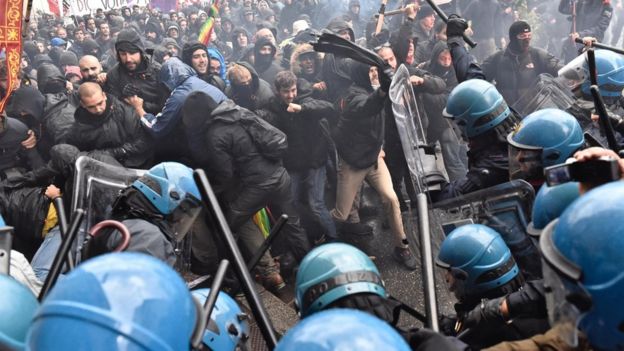 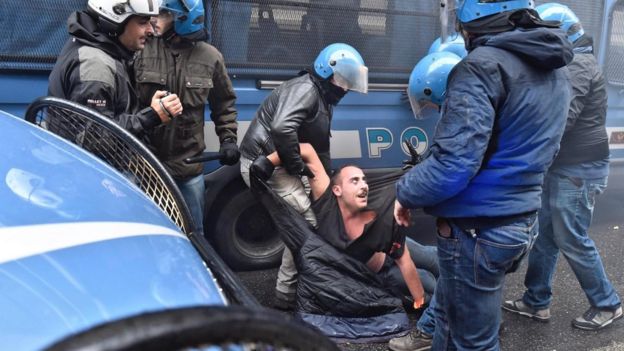 The young protesters were marching through the centre of Florence trying to reach a building where Mr Renzi’s Democratic Party was holding its annual convention.

Demonstrators, some carrying banners reading “No to Renzi”, tried to separate from the police in riot gear by dragging metal fences into the streets.

Reports said they were among a larger group of peaceful protesters against the referendum.

Florence’s Mayor Dario Nardella condemned the protests, saying: “Demonstrating is a right, but the use of violence is despicable and unacceptable.”

One officer was hurt in the leg during the clashes, Italian media said.