Walt lives in Lebanon NH, very close to our campsite yesterday.  We thought we’d meet at Meredith NH, on Lake Winnipesaukee, but chose to meet at Plymouth, NH.   We broke camp, chatted with Carl and Olivia, filled our propane tank, and headed to Plymouth.  Our propane tank measured 1/4 full, but only took a bit over 5 gallons of propane.  We have a 13 gallon propane tank, so says the view specifications.  Why it registers 1/4 full when we have more than half left is a puzzle.  Either our tank is less than 13 gal. or we can run the tank down to an empty reading and still have 1/4 tank left.  Then again, there are any number of other things that can be at play.  The View does not have through-tank sensors, but they are mounted on the side of the tank and may not be super accurate.

We arrived in Plymouth rather quickly.  It was down-hill and a short 22 mile drive.  As usual, we drove through the town looking for likely places to park, U-turned, and parked in the RR-station parking lot.  There’s lots of level parking there. 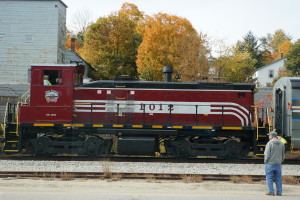 While we we parking, we notice an odd thing.  There were a number of older fellows milling about the tracks holding cameras at the ready.  A short time later a train pulled into the closed station!  There were four passenger cars with a pusher engine.  We joined the photographic frenzy.  I actually thought for a moment that Bernie Sanders might disembark!

The engine uncoupled, pulled around the cars, and re-coupled at the other end. Then some of the spectators headed to the cars and boarded.  The coach captain walked over and invited us all aboard.  Ellen hopped out of Li’l Beast and followed the captain back to the car and hopped aboard.  He said that an engineering society had preserved the train as it would have been in its heyday.  One car was setup as a private car.  A wealthy individual would have owned or rented such a car. The other cars were setup as a lounge with plush overstuffed chairs and a grand piano.

As Ellen went aboard she said she was not a member of the engineering society.  The captain said, “But I’m sure you have engineered your live quite well. Welcome aboard!”. 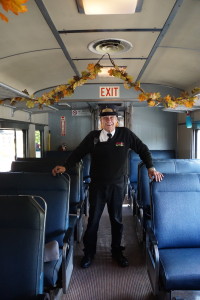 Later Ellen learned that it was the Plymouth historical society that preserved the train.  It runs between Plymouth and Lincoln and Meredith now and then; junkets for members and dignitaries. 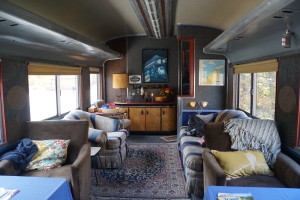 We continued on to main street and recognized Walt walking toward us a few blocks later.  We grabbed a cup of coffee, then walked to “The Common Man Inn and Spa”.   Walt had left his jacket in his truck and went back to get it.  Ellen and I waited outside a head shop that was warm and pretty busy.  It’s located near the college.  We waited and waited, no Walt.  Still waiting, up drove a blue truck with Walt at the wheel.  “The hotel is over a mile away, I thought we should drive”, said he.  We piled in and were; off to the inn.

The Common Man Inn and Spa is another not to be missed “landmark”.  It is an old wood working building converted and expanded into an inn.  The entry opens into the gift shop.  We walked to the counter to ask where the restaurant is and before we could get a word out, the woman at the counter asked, “Are you with the wedding?  The shuttle is here.”  We joked with her with a “Yes, if they’ll have us.”  Then asked for the restaurant.

The bar/restaurant is three stories and has a herb garden and outside seating on a lawn on the third floor roof!  The huge boiler that was used to burn discarded remnants now is a wine cellar and seating for 12 diners at a long table.  The Inn is open year round.  We had drinks, and great conversation over a relatively uninteresting lunch, then decamped to the fireplace in the souvenir/gift shop.  As we were talking, the wedding party returned to warm themselves.  The bride and groom took front and center in front of the fireplace.  We chose to leave them to themselves and  walked away.

The Common Man Inn and Spa

The day went too quickly.  Back at home, Walt thought The Beast was a perfect size for us.  We spend a bit more time getting warm before Walt left to go back home, Lebanon.  We had such a good time with Walt, we forget to take any photos of the three of us or of the inn!  Thanks Walt for a great (if short) visit.  You’re always welcome, come visit in California some time.

We drove back toward Lincoln, found that the KOA, Woodstock was open and camped there for the night.  Again,, they closed the next day.  This is the fourth time we have closed a campground.

This morning, Sunday 10/18/2015, It was 27 degrees.  Our water hose was partially frozen and water pressure was zip.  Tomorrow it will be colder and I’ll disconnect our hose.  I can’t wait for Indian summer!