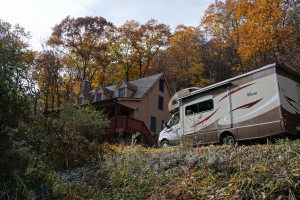 I had mixed feelings leaving Ed and Jean this morning.  I look forward to new adventures: Cape Cod, Boston, Martha’s Vineyard, and wandering our way.  Each will be exciting!  But leaving Ed and Jean is sad.  I would love to spend more time with Ed and getting to know Jean better.  Still it was time to go,  The two extra days we willingly lingered meant cutting out our trip to North Hampton and Rye Beach New Hampshire.  There will be no stop at Brown’s Restaurant Hampton Beach NH.  The mountain coaster and zip lining we did in the Berkshires, meeting Terry, and having another two days with Ed and Jean more than make up for the two “lost” days. 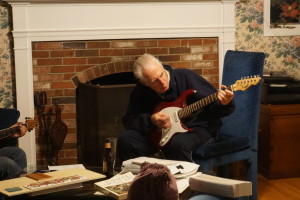 Ed and I played guitar some and Ed showed me some of his prints.   He carves linoleum and creates prints from them.  He has a press in his “man cave”.  He teaches computer programming to elementary school children a few times a week.  He also reads about computer programming and algorithms.  For a retired guy, Ed keeps himself very busy.  Then he and Jean are building a custom home in the hills that is amazing.  The electric guitar Ed is shown playing, he found in the attic of their home!  It’s a good guitar with great action. 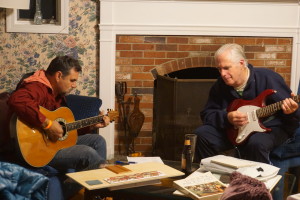 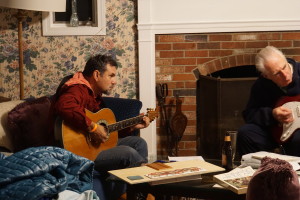 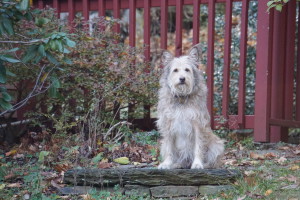 Maxie Expecting to go on a Trip

After saying our goodbyes, we headed east toward Boston leaving late, much later than usual.  We had a surprising pile of stuff to pack back into “The Beast”.  Looking for campgrounds around Boston, AllStays showed three all-year campgrounds: one in Worcester, one in Rhode Island (!?!), and one on the Cape.  We chose to try Scusset Beach State Park on the bay side of Cape Cod.  About an hour into our drive, Ellen called the state park and got no answer.  This is usually not a good thing, It indicates a closed campground.  Still we drove on with a sense of foreboding. 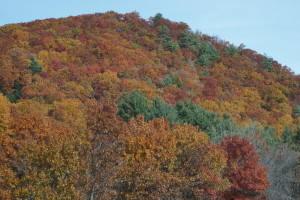 Past Peak and Still Wonderful

Typical for us, as we neared the beach we made a wrong turn that sent us over the Sagamore Bridge.  In a futile attempt to  U-turn, I turned into the parking lot of a huge supermarket.  We needed some provisions and took the opportunity to stock up.  Back on the highway and knowing exactly how to get back over the bridge, I was forced the wrong way on SR 6 and went another five or six miles out of our way.  That’s no big deal, really.  Back over the bridge, we turned onto Scusset Beach Road headed toward the park.  Our GPS went wacky and kept telling us to turn around and take some other road.  Knowing better we followed Scusset Beach road to the park.  As we arrived, our McNally GPS chimed in with, “You have arrived at your destination”.    Good to know, I thought.

We drove into the reservation parking lot, which was practically empty.  I walked around the reservation building and found it deserted.  There was a map of the park with a number of designated RV campsites shown.  We drove on to the RV campground.

The RV campground is a combination of open campsites and some campsites sheltered by trees.  The campground is located alongside the Cape Canal which allows boats to go from the bay side to the ocean without navigating around the cape’s arm.  It is a wonderful place to camp off season.  We saw a few large RVs and some 5th wheels as we drove in.  Great, it’s open we thought.

As we neared a 5th wheel, I stopped, got out, and talked with Bruce and Vivian about the campsite.  As luck would have it, the campground is partially open.  It is open on Thursday, Friday, and Saturday of the week and closed the other days.  At the end of December the campground may close until spring.  Bruce said the ranger he spoke with “was not sure” when they would close, but for now the water was still on.  We had a place to stay for the night!  My plan to rent a car and make forays to Concord, Lexington, Arlington, Cambridge, and Boston from a campsite were dashed.  We had no place to camp tomorrow.  Now what would we do?

Bruce and Vivian to the rescue!  They recommended a year-round campsite in Foxboro that is five star and full service.  They could be booked full weekends, but Bruce thought on Sunday and mid-week we would have no problem getting a site.   With the sieve my memory has become of late, Vivian wrote down the camp’s name: Normandy Farms Campground Foxboro Ma.   As I was talking with Bruce, Ellen climbed out of “The Beast” and joined the conversation. RV people are a great.  We spoke until it was apparent we all were getting cold.  It was a brisk 46 degrees with the sun setting.

We chose a site and settled in with good sat and excellent local channel reception.  We walked the beach.  The east coast beaches are of soft white sand and Scusset Beach is no exception.  The cape channel was “right ov’a they’ya”.   There were two late-evening fishermen who were not giving up and a handful of people walking back from the beach as we walked out for the sunset.  Headed back to Li’l Beast, we checked the rest rooms to find them open, heated, and very clean.  There was a note on the men’s room stating that the restrooms will be closed for the season at 10:30 AM November 1 (tomorrow!).  Again we squeaked by with a night camping as the campground closed.  This was the sixth time we’ve done this on our trip! 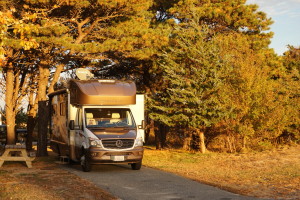 Back at “home” I called Normandy Farms Campground.  They are open.  We can chose our site when we arrive.  Yes there is a car rental close by, but we might consider driving to a nearby subway station and taking a train into Boston.  There’s no problem with sites this week, we can stay as long as we like.  They even have a concierge who can help us with our plans!   If we had not stopped to talk with Bruce and Vivian, we might never have known about this place.  This is our first full-on “FAIL” for AllStays.  We’ll have to revamp our campground search to include listings from a 2015 book.

I checked the Patriots schedule hoping that they would not have a game scheduled tomorrow.  They do not.  The Pats took the Dolphins apart last Thursday and do not play the weekend.  Good Stuff all around.

We’re snug as a bug in The Beast on Halloween evening watching Stephen King’s Red Rose on DirecTV.

Tomorrow we will head further east, up Cape Cod to White Cedar Swamp near Marconi Station.  Terry said the forest was like the “forest of despair” in the Princess Bride.  I knew immediately what she meant.  Also Marconi Station was one of two stations setup to test Marconi’s first cross-Atlantic radio transmission.  The other station was established in Maine.  It’s about an hour’s drive out the cape to Marconi Station and another two hours back from there to Foxboro.  The JETS play the Raiders tomorrow at 1 PM West coast time.  We’ll be settled in at Normandy Farms by game time at 4 PM EST.  We just have to remember to set our clocks back an hour tonight.

I wish that Ed, Frank, Jim, and I could re-unite.  Perhaps one day Frank, Ed, and I will.  I miss Jim and think of him from time to time. 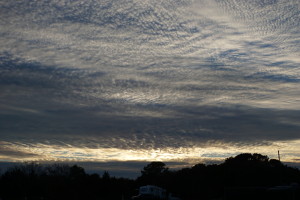 One thought on “Cape Cod, Massachusetts”