We had breakfast at the hotel. Fair cappuccinos, ok cornetti, good scrambled eggs and a bacon like ham thing.  We ate comfortably, meaning we did not gorge ourselves.  Photos of the hotel make it appear to sit on the water.  It is actually a block from the sea. The dining area overlooks a parking lot and the sea. 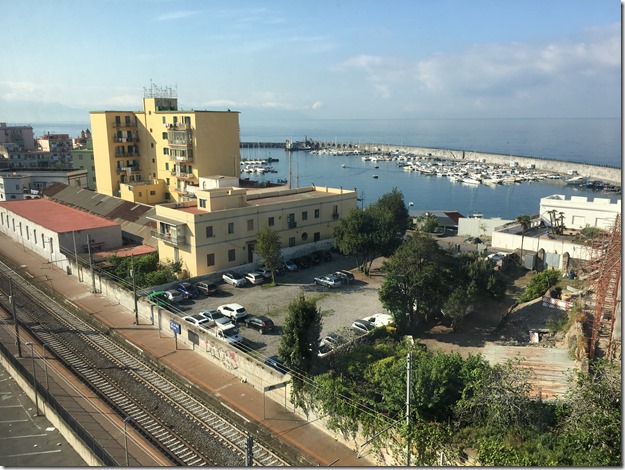 The manager handling the breakfast buffet was two faced.  He was gracious to the guests and rude to his workers.  I think he was eastern European, though he could easily have been Italian.  He ruled the dining area with intimidation and an iron fist.

I do recommend Hotel Poseidon.  It is comfortable, close to Pompeii, close to exquisite sea food, and has a parking garage. 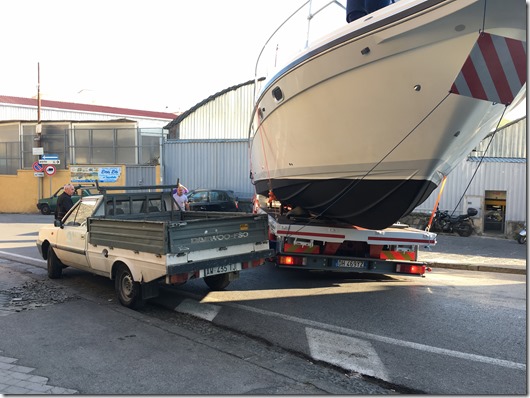 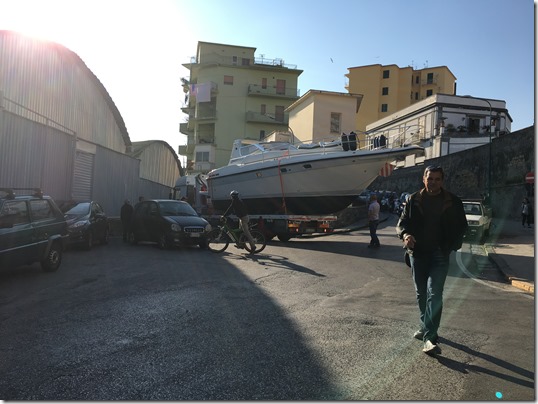 Torre del Greco: Getting a Boat to the Marina

We left Torre del Greco for Gaeta around 10:30.  Getting out of Torre del Greco was a trip.  Our GPS guided us along the coast on a road that grew increasingly primitive.  At one point it led us to a dirt parking strip fronting a repair shop.  An ancient wall rose up to our right, the sea and old unkempt buildings to our left.  There was a very tiny opening in the wall.  That was the road.  I had to back up to negotiate that turn and the immediate left turn that followed.  Eventually we found a road that took us to the autostrada.  Did I mention driving in Italy is both fun and challenging? 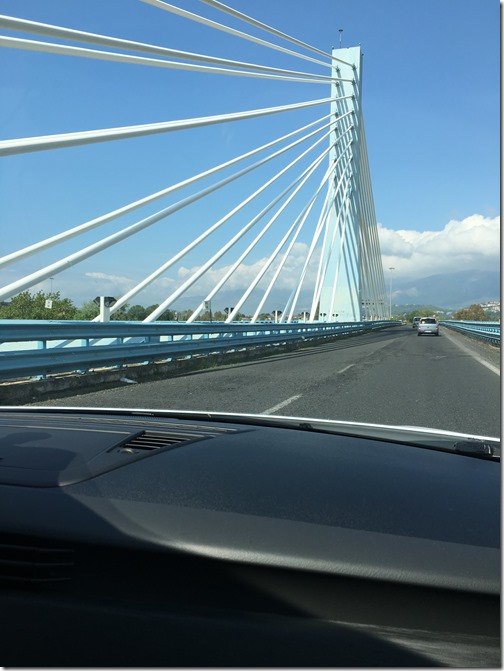 You wouldn’t think it’s a bridge, but for the tower and cables

It was a gloriously sunny day driving the coast north.  We had roughly three hours drive to get to Sperlonga. Time was tight; we decided to skip driving to Bacoli.  This way we avoided Napoli entirely. 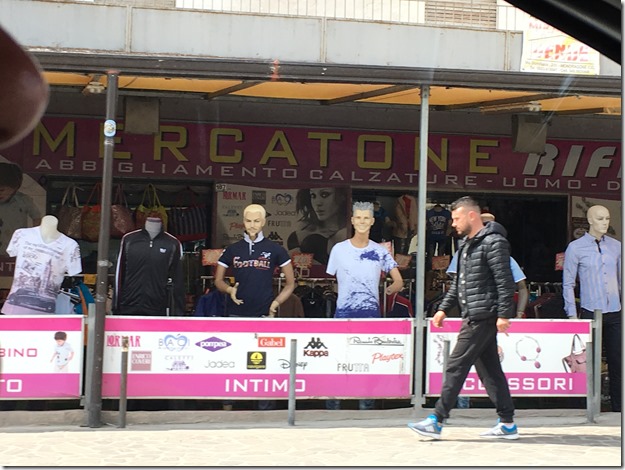 Mondragone, on the Road to Gaeta 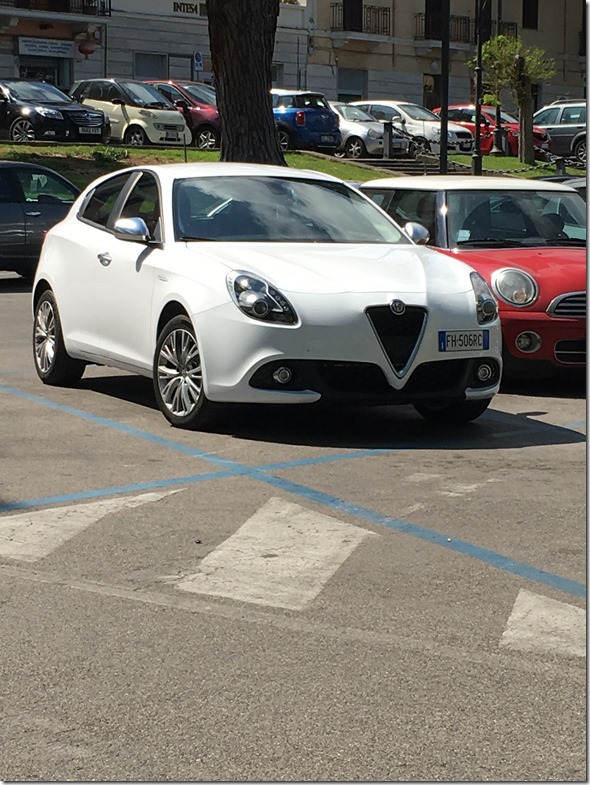 A bay curves into a point of land that is Gaeta.  Most interesting geological formations along Italy’s coast are home to ancient towns that grew into modern towns that harbor a centro storico, or historical district.  Gaeta is one of those places.

We Parked Just Off This Small Square 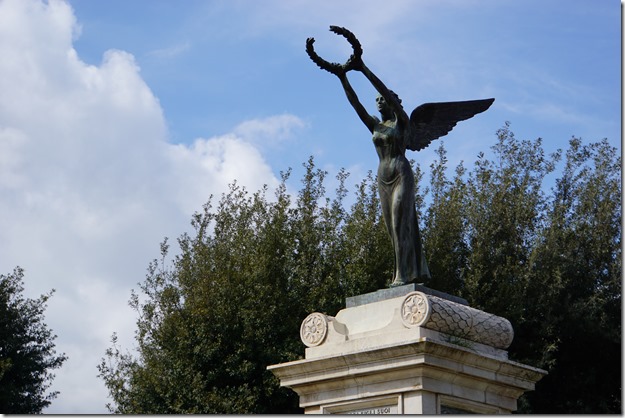 We drove into Gaeta and immediately found an expansive parking lot across from the bay.  It is Saturday, the day before Easter..  Most people are home visiting family and relatives. Great. I parked.  Another rookie mistake.  It is a better idea to drive around a small town some to reconnoiter.  Check out where the points of interest are and the scale of the town.  This works if the town is small.  It can backfire if the town is large. 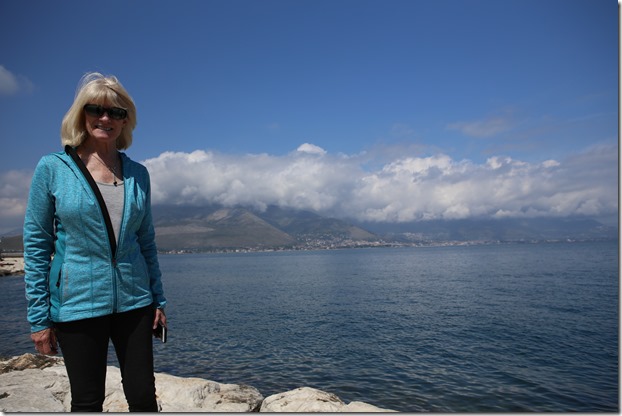 Ellen at Gaeta Along The Shore

We parked and walked along the sea promenade.  We were very hungry at this point; many (most) Italian restaurants close after lunch then open again after setting up for dinner.  We’ had been caught looking for la pranza (lunch) at 2:15 with no luck.  Not this time!  We walked by Antica Pizzeria Ciro, which was open and had lunch there.  We both ordered spaghetti vongole. We cannot get enough clams on the Italian coast!  My glass of house white wine was  “ok”, and the vongole was fresh and tasty, but probably yesterday’s catch.  While good, it was noticeably different.  There were more clams that didn’t open when cooked indicating they had died prior to going in the pot.   Lunch was just ok. 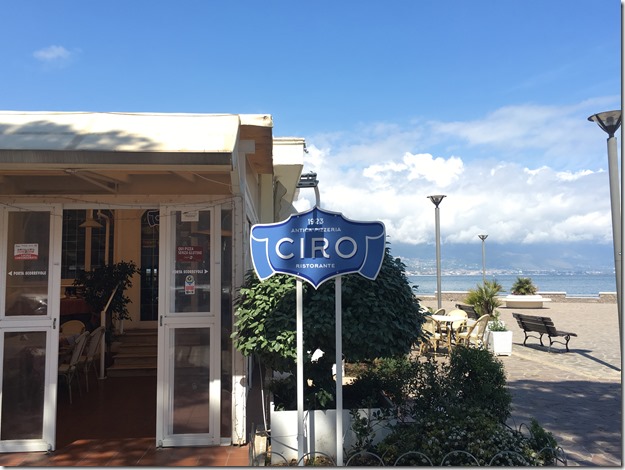 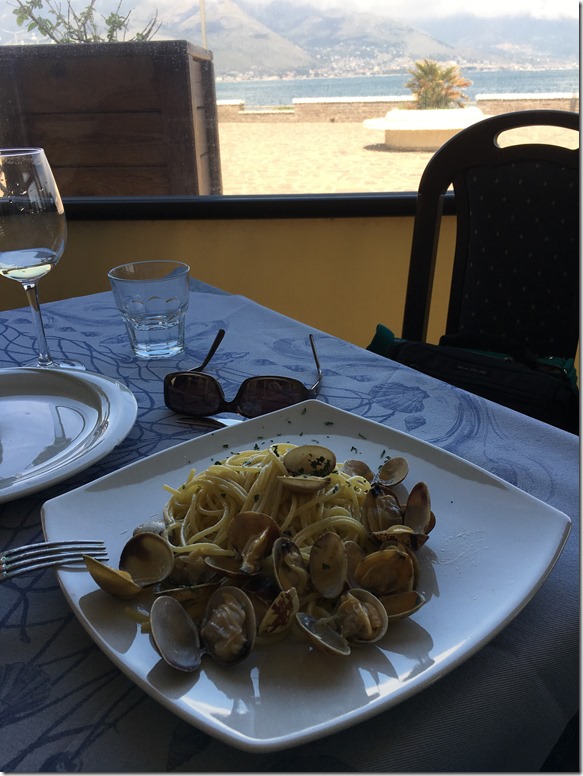 We had a table by the Plexiglas and canvass windows and had a wonderful view of the bay.  Toward the end of our meal, a group of six or eight people, friends of the owner arrived.  They apparently complained of the heat in the room.  The owner opened our Plexiglas/canvass window/door such that the Plexiglas rolled up and away and the canvass rolled up blocked our view.  Worse, now the bottom of our “window” was open to the wind that immediately made our table frigid.

Moments later our waiter dropped by asking if we wanted anything more, dessert, coffee, espresso…  “Yes, could you ask the owner to close our window so we don’t freeze and can see the bay?”, but of course that went unsaid.  Instead, we asked, “il conto per favore” and made as if to leave.  The waiter had watched the entire fiasco.  He actually went to the owner to mention they were losing business having the window open.  The owner could care less.  Italy has pluses and minuses.  This was a minus for us, but only because we had not engaged the owner earlier.   It was no big deal, we were planning to leave then anyway. 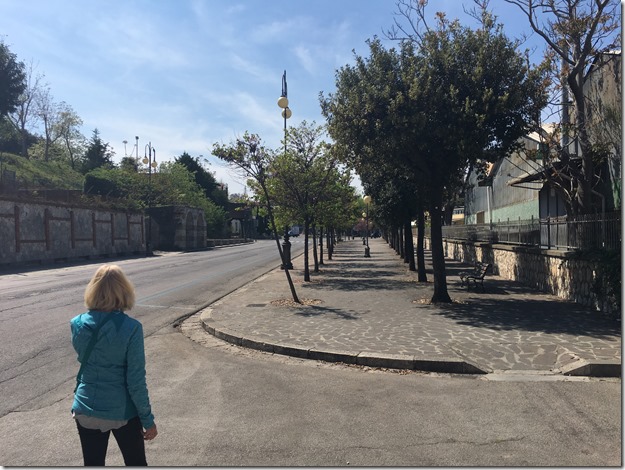 What, Gaeta Has No Centro Storico?

Continuing our walk along the promenade, we first came to a marina, then parking, then a “centro storico” sign, and the old part of the city built into the hillside.  There were a few ristoranti open, some bars too. We walked the historic center and enjoyed the view from high above the sea.  Gaeta is well worth a stop for lunch and to walk the old city.  I know I will look further along the promenade and skip Ciro next time. 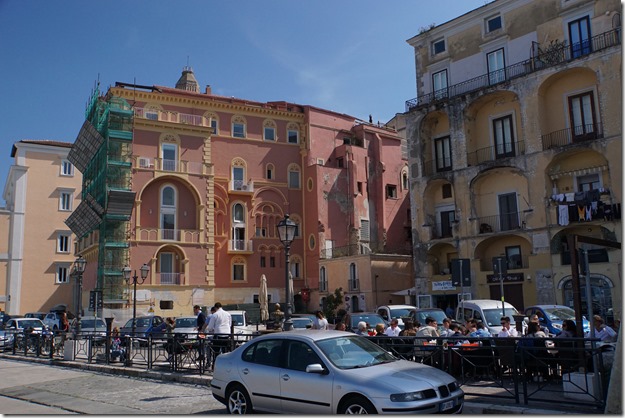 Where We Should Have Parked and Eaten? 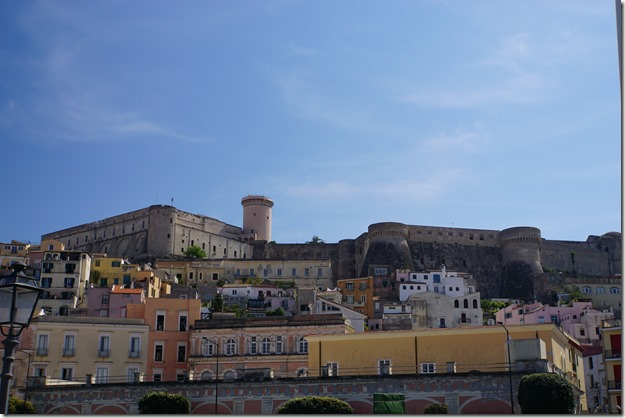 The Fort, Gaeta, Played a Role in the Unification of Italy in 1860.

Details of a Bell Tower of St. Erasmus, Gaeta 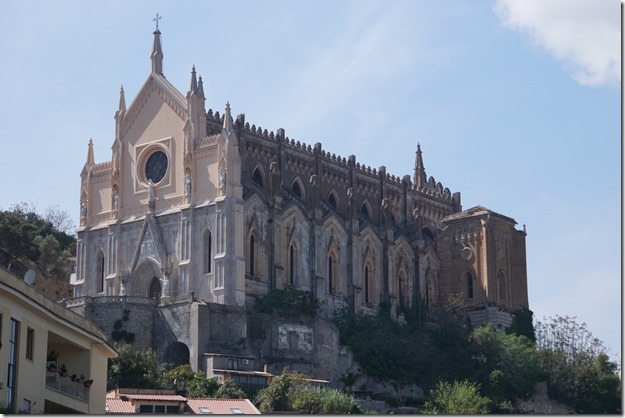 A Stairway, Let’s See What’s Up There! 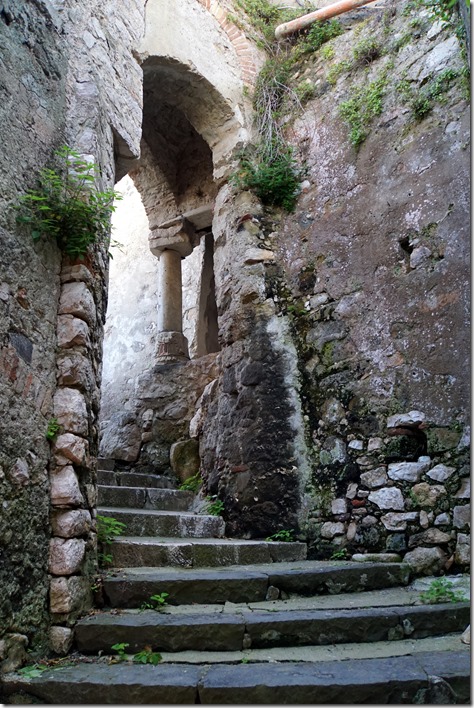 Some Stairways Are More Historic 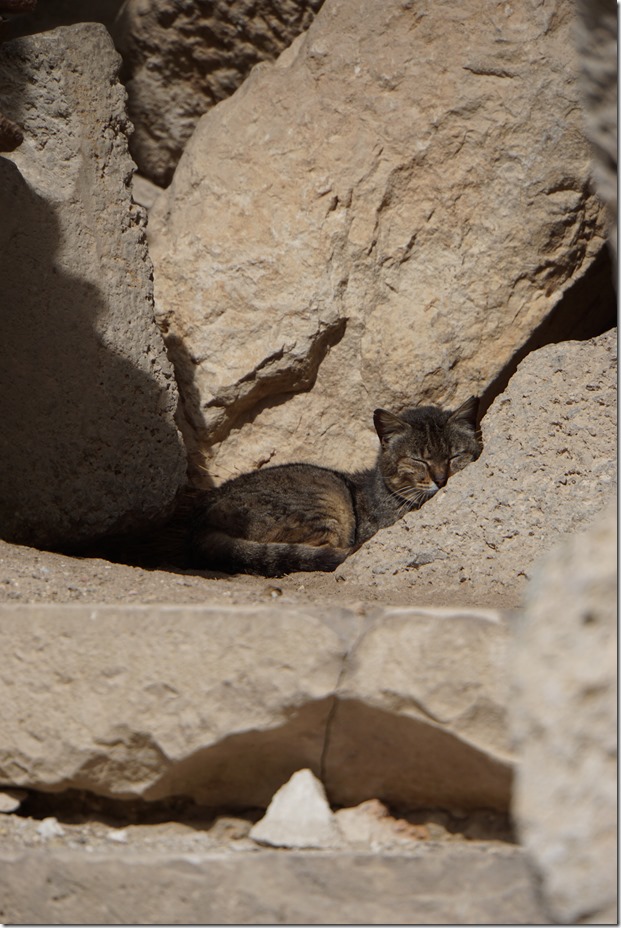 Find Your Place in the Sun.

The drive from Gaeta to Sperlonga is about thirty minutes.  With this in mind, we lingered in Gaeta.

On the Road To Sperlonga 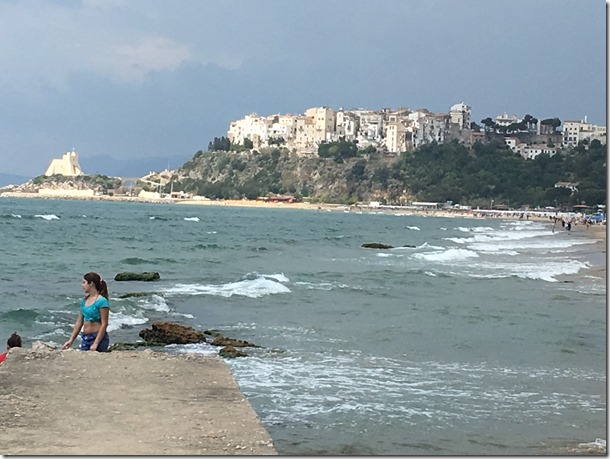 The drive into Sperlonga is along narrow two way streets that are not that intimidating.  We found the hotel by driving past the street twice, parking, and using Google on our Italian phone to get us the last 100 meters. “Here is your room key, breakfast is served on floor zero.  Your room is on the 2nd floor.  Park anywhere in back.”  As with every room we have stayed in thus far, the room was clean and outfitted with brand new Italian fixtures.  We took the elevator to the 2nd floor and didn’t find room 215.  It was one floor down on the first floor.  Breakfast must have been served of floor –1!  We unpacked what we needed from what little we had and headed out to explore Sperlonga.

Sperlonga has two long, beautiful beaches divided by a high spit of rock that juts into the  sea.  The old city of Sperlonga sits atop this rock and has steep narrow staircases between very old buildings.  Pathways lead to pathways that go up or down; up to the piazza or down to the sea.  There are boutique hotels and B&B’s hidden away in dead-end stairways or closed off gates. In the old town cafes and ristoranti line the piazza.  Further from the sea, is a piazza that local children use to play.  Soccer balls fly here and there, most are run down.  Children show off their skills or mess up trying a new skill. 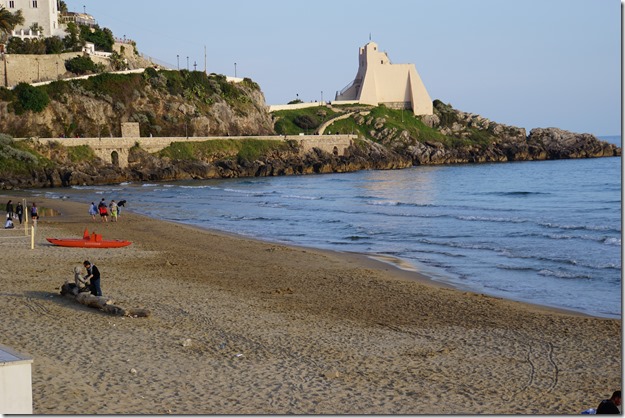 The Spit and Tower that Divide the two Lidos 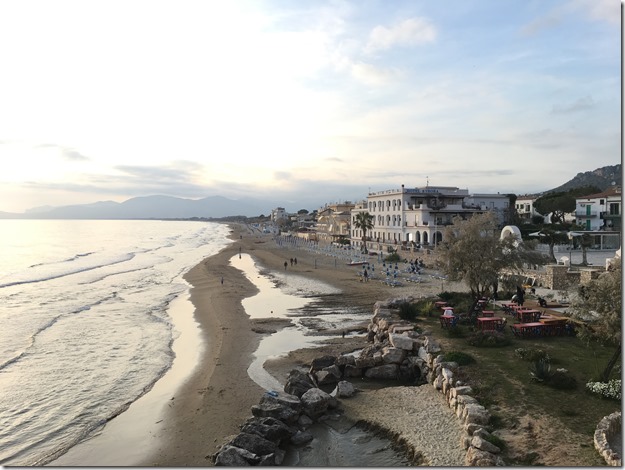 We walked the pathways (street conjures up the wrong image) coming to know Sperlonga’s ins and outs.  Hungry again, even after a good spaghetti lunch.  We vowed not to eat pizza tonight!  While pizza is tasty, Italy has so much more to offer.  Local cuisine varies so much from region to region, it seems a travesty to just have pizza. Eat local. 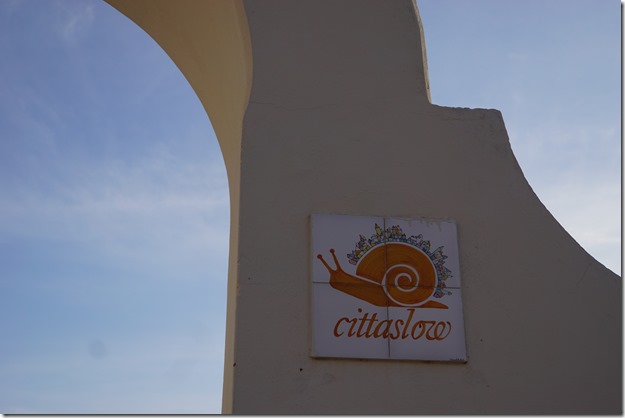 Sperlonga is a  “slow food” city.  Italy’s slow food movement began in Rome when McDonalds attempted to open a store right beside the Spanish Steps.  That store was opposed by residents who feel that a fast food chain is anathema to the concept of Italian life.  “Slow Food” is a movement trying to preserve the best of regional foods by encouraging the use of local ingredients and promoting cooking, eating, and enjoying a meal SLOWLY.  Piano Piano, as the Italians say.

Stairs From the Sea to Centro Storico, Sperlonga

I wanted to try local cuisine, but at the same time have a light meal.  It was the day before Easter and many ristorante were closed.  Then it was too early for others to open.  We walked up to the main piazza, around the upper town, then back down another route, not settling on any place to eat. 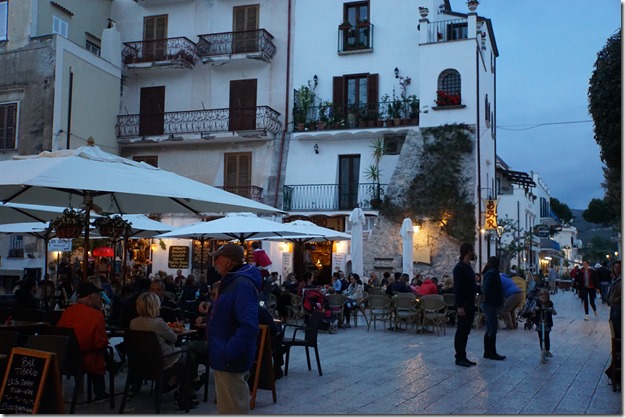 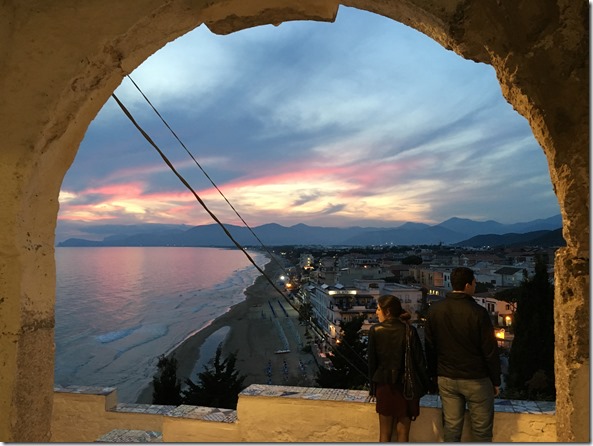 Sunset Walking To The Sea

Back at sea level, we walked the lido toward home, Viriglio Grand Hotel Sperlonga.  I whipped out my trusty Italian phone and looked up restaurants near me.  Up popped “Tropical Pizza” rated #1 for cheap eats.  Pizza?  Well ok.   It was busy, though we were seated quickly as were a hoard of people behind us.  The place was overflowing with good natured talk among family and friends.  They had an astounding variety of pizza.  As Julia Roberts said, “There are only two kinds of pizza, Margherita  and Margherita with double buffalo mozzarella.”  I ordered a Margherita pizza, Ellen had vegetables of her choice grilled and half of my pizza.  It seems just a bit weird to be eating pizza in a slow food town.

We were hungry and the pizza was good.  Tropical Pizza had a Tropical Bar next door that played loud music.  Inside, the pizza place played a low volume mix of Italian ballads and U.S. mellow rock (think Beach Boys).