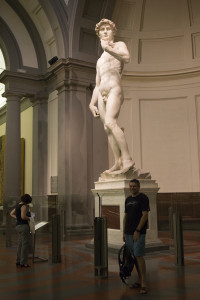 The weather today is cool but muggy. The humidity hinted at rain, but there was none. There is a welcome cool breeze that comes up in the afternoon.

Today, we chose to take a page from “Istanbul’s Bazaar Quarter, back street walking tours” and take “walk B” around and through the bazaar. Sounds simple enough. We boarded the metro from Sishane (a 4 elector descent) to Vezneciler, the stop nearest the bazaar. We hit street level to crowds of people, many students, and tried to orient ourselves. We were near the university, OK. No where are we on our map. Where’s the university, not shown on the walking tour map. Ok how about Sishane or Vezneciler metro stops, no metro stops on the map. OK, let’s check the street we’re on. There were no street markings at the near intersection nor at the far intersection. Amazing. Navigation wise we were dead. We could fire up GPS with cellular roming on, but that could be very expensive. Ellen to the rescue, she asked a young student where we were on the map. The student too could not locate us on our map! She did know how to get to the bazaar though and her directions were spot on. It looks like the young generation in Turkey (or at least Istanbul) is learning English.

I’m trying to learn just a few Turkish phrases, like good morning, hello, and thank you but it is not easy.

Ok given the poor correlation between reality and the walking tour, we jettisoned the walking tour in favor of finding the bazaar and perhaps picking the tour up from there. Well the bazaar is homogeneous. I mean it’s a labyrinth of corridors filled with merchants selling “stuff”. Any stuff you might want… We prowled the mall flabbergasted at the extent of stuff. Much of the stuff was knock-offs of famous brands, but some appeared to be reasonably high quality probably produced by local artisans. The barkers were not too obnoxious if given a firm no, thank you or we may be by tomorrow. Only two guys followed us for 30 yards with a continuous prattle of why we absolutely needed his very best lowest priced whatever. There were even two booths selling hand held sewing machines. I know I need one of those.

My take on the bazaar is it is a wonderful place to get a deal on an item if you know what you want, have some time to burn, and love to bargain. These guys love to bargain, but not just back and forth with price changes, but with a whole story why your family will die of starvation if you spend one lira more on the item and how you have to save to by a bicycle for your son so he has transportation when he go to college. That sort of thing. I watched this go on often. Once a woman refused to pay the marked price for items at a supermarket and the banter went on and on getting increasing hostile until she decided not to buy one of the items.

I must say that I am very fond of authentic Turkish food. The spices are unique to Turkey (and probably Greece as well). Tomorrow we’ll go to the spice bar, perhaps the Blue Mosque, and/or Topkapi Palace.

Following our noses back home, we stumbled upon the Tunnel, Istanbul’s oldest subway and the world’s second oldest. Tomorrow we’ll take that to the Karakoi neighborhood, which may be close to the cruise ship terminal. We’ll see.

Ellen had roasted corn on the cob we got from one vendor outside the bazaar. Roasted corn on the cob is quite popular here. We also purchased a very small bag of roasted chestnuts which was good, but not as good as the corn. We passed several vendors cooking up kabobs of various sorts that smelled too good to be true. We were not hungry and didn’t try any today. There’s always tomorrow.

We stopped inside an Orthodox Christian church today. It’s the first time I’ve been inside one, though it was not so different from your typical Catholic church. Typical. It is nothing like St. Peter’s in the Vatican.

So we are home now, resting ahead of our evening/night outing. Perhaps we’ll see whirling dervishes while we’re here. I chose not to take a camera with us this today to see how much I would stand out if I DID take a camera. Answer: not so much.

I am curious. Constantine moved the capital of the Roman Empire to Constantinople, what is today Istanbul. Where are the roman ruins and status? I imagine there were quite a few built to commemorate Constantine. Did the Turks destroy the statues and build over the Roman sites? The Koran does not allow the depiction of the human form. Time to do some research…

Looking at walk D from the street walking tour book, Ellen noticed that the spice bazaar (entirely different than the grand bazaar) is quite close to the blue mosque and is the start of tour D in the book. We’ll take the tunnel down the hill tomorrow morning, walk the bridge to Europe (Istanbul sits astride Asia and Europe), find the Blue Mosque and start our walking tour.

I have never been inside a mosque. That too will change.