Day 1, Our First Full Day on the Road 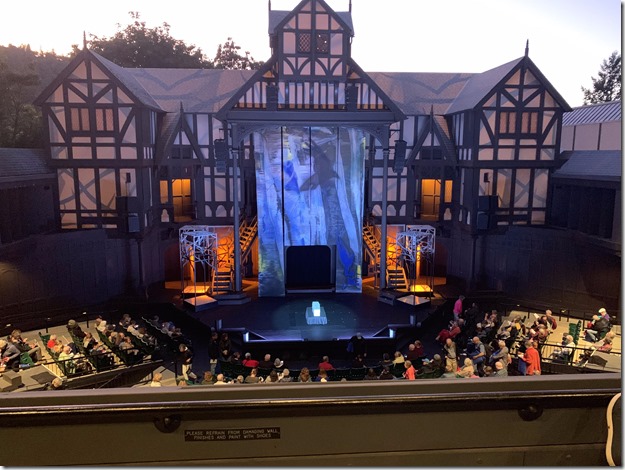 On 9/10 we left late, drove to Redding, and stayed at the Marina RV Park in Redding.  We’d stayed there last year.  Nothing has changed it was just as expected.  On the way we passed Shasta Lake, snowcapped Mt. Shasta, Shasta Caverns, and  a bit further on, “The Crags”.  Sometime next year we will visit the Mt Shasta region for a few weeks.

We had hoped to make it to Ashland on 9/10 even with our late start.  It is much more fun to stop early and enjoy sundown once we’ve settled in.

The Yreka WallyWorld had a cheap sleeping bag, we’ll use it and not make the bed daily. It’s a short 50 miles further to Emigrant Lake just south of Ashland.  We took a “full hookup” site overlooking the lake. Last year we drove Li’l Beast into downtown Ashland.  That was a mistake; there is no RV parking to be found in the city.  Uber is available and would pick us up at the Lake!  Cool.

Unusual for Ellen, she wanted to relax and rest for  “a while” before going in town.  “What’s available to do in Ashland today”, she asked. I found that the Oregon Shakespeare Festival was staging Macbeth this evening.  Cool.  Each time we’ve driven through Ashland the festival was over.

We lounged.  I read some of a mystery I “borrowed” yesterday.  Time passed lazily.  The first Uber driver messaged to say he was headed to the airport and would be very late.  Our second uber driver took us right to the Starbucks downtown. “Oh yes,, Macbeth and two others are playing tonight.  The ticket office is just up the street there to the left across from the outdoor amphitheater. Macbeth is playing in the outdoor theater, just past the one you see there.”

Do we see a play tonight?  I had seen ticket prices ranging from $55 to $155.  “Let’s see what’s available”  Once we found our way, the ticket office’s open door was obvious.  Inside stood a small maze to guide people to the three ticket windows on the right.  The maze was empty.  The three people issuing tickets were sitting at their windows with no customers.  However to our left was a long bench with a number of people patiently waiting, but clearly not in line for tickets.  This was very strange; a line that was not a line!  What’s up?  The center ticket guy motioned to us.

“What are these people waiting for?  They are clearly not in line.”  “Oh, they’re waiting for rush to open.  Sometimes if we don’t sell out a performance, we put the remaining tickets on sale at $40.00.  You could wind up with a $155 seat for $40.  They are waiting for rush to open at 7:00.”   “Is this performance outdoors? Will we be sitting on stone?”  “Yes it is outdoors, but you’ll be sitting on regular seats, There are blankets available for a fee, a concession area, and you can bring your drinks to your seats.”

In the “rush group” a couple beside us were from Marin, another from Walnut Creek, and a woman who had dropped her daughter off for college was from San Mateo.  The Walnut Creek couple hoped for tickets to “The Cambodian Rock Band”.  Though sold out, two tickets became available, but were snapped up.

We walked out at 7:00 with our 2nd row balcony seats, ate a rushed meal at Umami Sushi, and headed back to find the outdoor theater. The “outdoor theater” is more truly an open air theater.  It is a crescent of seating facing a stage that fills in the crescent. It is fully enclosed though open to the sky.  Blankets and cushions in hand we walked up to balcony seating.  An usher with a wide grin said, “Stop!”.  When someone says stop, we stop.  She pointed through a stand of trees to our right, “Look, isn’t it beautiful”.   There was the 3/4 moon rising through the trees.  We grinned back.  “We often marvel at the beauty of sunsets and the moon.”

Macbeth was well done, though long at 3 hours running.  Our blankets kept us warm.  Most interesting, aside from the play itself, historically the play was first performed in 1606!   A year after the Gunpowder Plot, an attempt to blow up parliament and King James I.  Hamlet brought to mind Game Of Thrones.  There is lots of mayhem with few of the principals surviving.

An Uber picked us up at the Starbucks a few minutes after we left the theater and took us right to Li’l Beast.  We were comfortably home for the night.