We sold Little Beast, our prized motor home.  We flew to Crowley RV in Connecticut in February, 2015 during a very cold winters to purchase Little Beast.  This year, 2021, we are driving to LichtsinnRV in Iowa to purchase our new “Little Beast”.  We delayed delivery a week to avoid a record setting cold front that had Texas seeing –50 degrees Fahrenheit! As MM said, “déjà vu all over again”.

Our steed was a 2021 4 wheel drive Chevy Equinox.  I was extremely surprised at how well the Equinox performed in terms of gas mileage, power, comfort, and electronic enhancements.  If I were to purchase an internal combustion engine auto, I would actually consider one of these.

We decided to drive to outfit our new motor home with the items we loved in Little Beast,  Most everything fit in the Chevy,  I had to leave a few large items behind.

I had hoped to drive through to Salt Lake City, Utah the first day.  The first day took us 120 miles short.   My target for the second day was North Platte, Nebraska.  Cynthia, a close friend, suggested we stop in Kearney, Nebraska to see the annual Sand Crane migration.  These cranes migrate from South America to Canada Alaska, and even Russia.  Between February and April, they stop-over in the North Platte river valley to feed before continuing north.  It is estimated that 600,000 cranes make this trip every year.  We had no idea.  We would have noticed the flights of “birds” overhead and wondered what was going on.

We stopped at Kearney’s tourist information building (which was closed) and happened to catch a fellow who was just leaving.  He stopped, spoke with us a bit, let us into the tourist center, then talked sand cranes with us for a bit.   We left with a map and locations for likely sightings.  “They are out there, I saw maybe 10,000 of them this morning.  But you never know where they will be.”   Two of his three recommendations were chock full of feeding cranes with more dropping from the skies every few minutes.

The third site he recommended was a bust and probably would have remained so, but for Ellen.  She stopped a couple and asked “how was it?”    “Oh there is nothing to see there now, but if you come at sunset or sunrise, you will see the cranes congregating.  We arrived just at sunset this morning and that was just too late.  Even so, sunrise over the river was idyllic. Be sure to be here well before sunrise.”   We walked to the pedestrian bridge over the North Platte river and saw…   no birds.

We stayed at the Western Inn and were up at 5AM.   We grabbed espresso at Scooters and headed off.  We walked to the bridge well before sunrise.  We could hear the cranes cooing about a quarter mile distant.  They rose as one about 15 minutes before the sun rose and flew back and forth over the river a number of times.  Slowly flights of a few hundred at a time pealed off and went their own way.   It was fascinating to see how one chevron of cranes would join another; how the lead bird of one flight would join an arm of another flight.  How is the lead bird “chosen”?  Is there a pecking order? Do some birds vie for dominance? 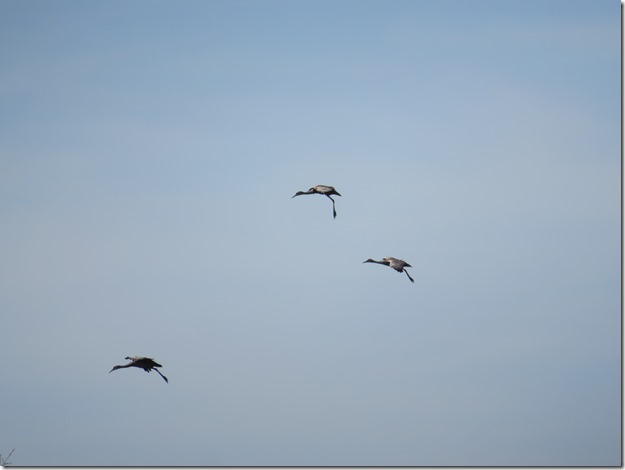 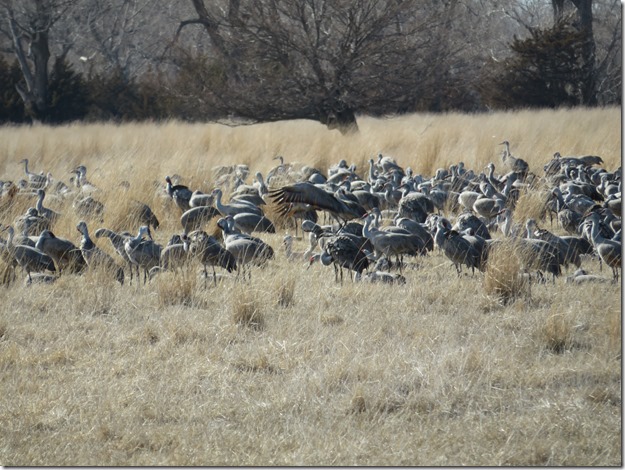 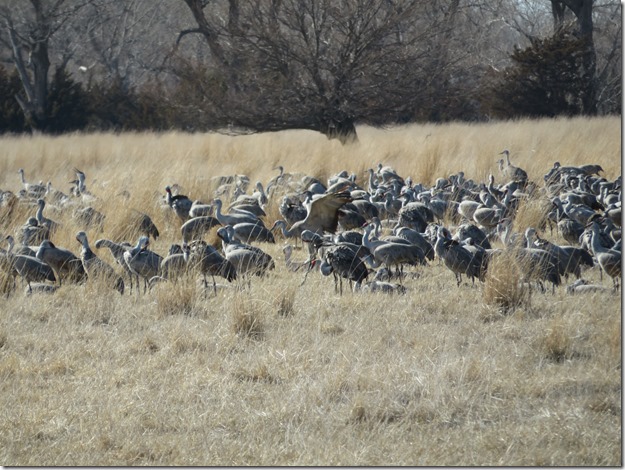 Feeding in a local field, Kearney

A Vast Number of Sand Cranes (expand the photo)

A Chevron Forming Up 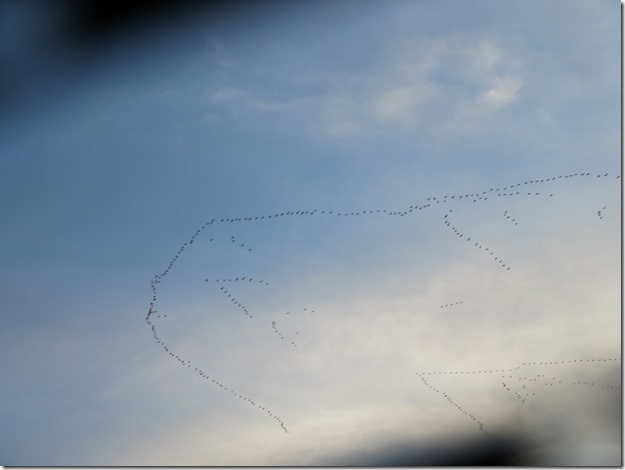 Cranes in Flight, Everywhere We Looked 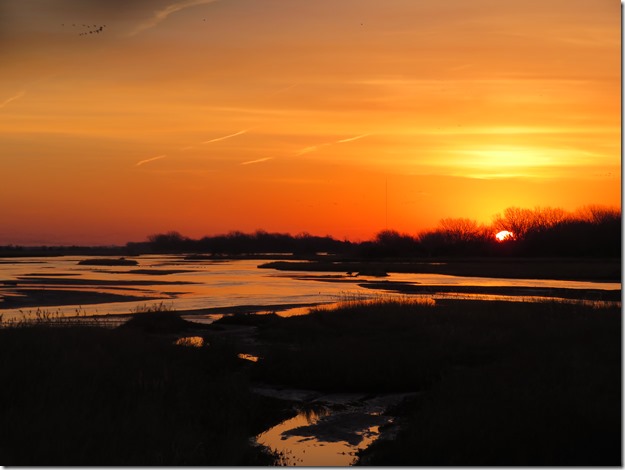 Sunrise on the North Platte River, “Too Late”