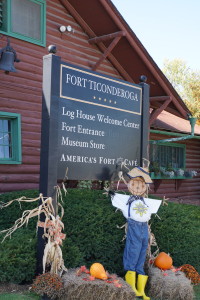 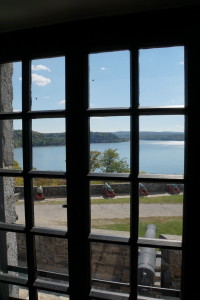 The Gift Shop & Cafe is Warm and Cozy

Yesterday (10/7/15) we visited Fort Ticonderoga.  We did not post photos of the fort or views of Lake Champlain in yesterday’s blog, so….    here is a sense of what it is like to visit the fort. 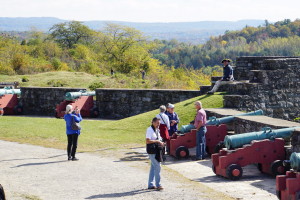 All but two of the canon at the fort were brought from the Caribbean in the 1950s.  One of Pell’s relatives went to the islands and purchased old French and Spanish canon for the fort.  He and the canon were captured by Honduran Thugs and held for ransom.  The ransom was negotiated and paid and he was released along with the canon.

The Pell family owns the land around the fort, the fort, and King’s Gardens.  This is the same Pell who instituted the Pell Grants for education. 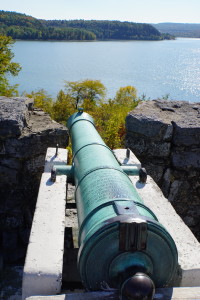 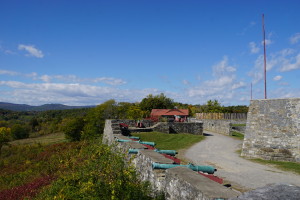 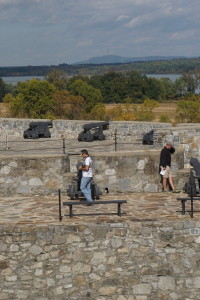 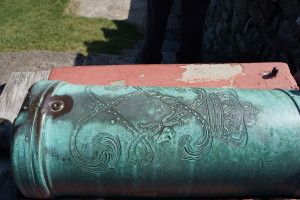 We knew it would be a cold morning, but come on: 32 degrees?  That’s cold.  Later talking with the owners of Cascade Acres Mobile Home Park and Campground we learned that it had snowed a foot and a half this time two years ago!  “Be Prepared?”  NOT. 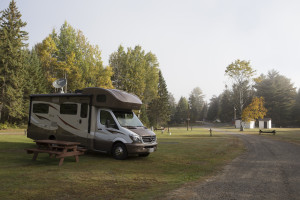 At the Cascade Acres Campground

First I must say I was glad they were there.  We had no desire to push on to a KOA that was pretty far from the town of Lake Placid.  Had we gone to the KOA, we would never have walked through main street Lake Placid or seen the beauty of Mirror Lake.  The owners of Brookwood RV Campsite, Ticonderoga said some of the best BBQ is at Smoke Signals on main street Lake Placid.  We would have missed this place if we pushed on to the KOA.  We still missed it, but for different reasons.

A word about Cascade Acres.  Off season the RV campground is EMPTY.  Park where you want, no problem.  Well sorry, there is one little bitty problem.  They do not have your typical 30 AMP hookup.  50 amps?  Forgetaboutit.  What they do have is a pair of 15 Amp 110 V circuits to each campsite. Technically that is 30 AMPs but good luck connecting.  At a local hardware store the next day we bought an “in case” 110 to 30amp connector so we could connect to a 110 V circuit and carefully run some “stuff”.  Overnight at Cascade Acres I chose to use batteries and our generator.   Also the men’s/woman’s showers and toilets are not heated. That would be no problem “on season”, but a real drag mid-October.

All in all, camping at Cascade Acres was an “adventure”.  On the bright side, it was so close to the town of Lake Placid that all the negatives were a non-issue.  Walk main street and Mirror Lake in the fall and you’ll see why.

The owners were good to talk to.  They recommended taking the Cumberland Head Ferry from Plattsburgh NY to Vermont and described the route and said it would be about $20.00.  They were correct on all counts. 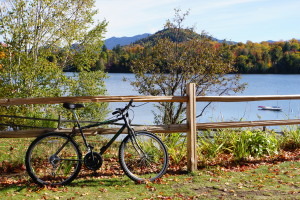 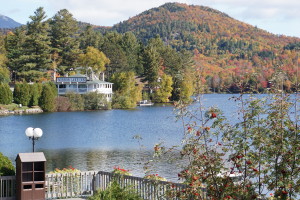 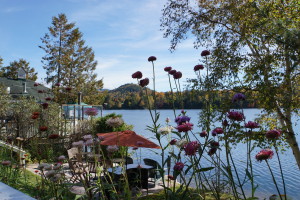 The main town of Lake Placid sits on Mirror Lake, not on Lake Placid.  It is a charming ski town and a tourist get-away the other three months.  We walked the town, keeping on the sunny side of the street which was a good 15 degrees warmer. 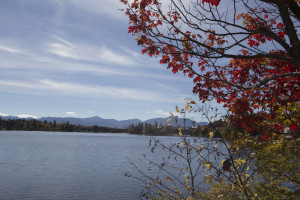 Smoke Signals opens at 4PM.  With some difficulty and longing, we agreed that staying at this lake until 4PM could jeopardize catching the ferry to Vermont. 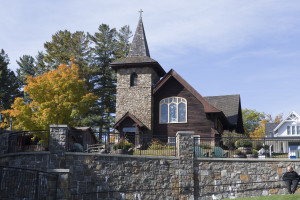 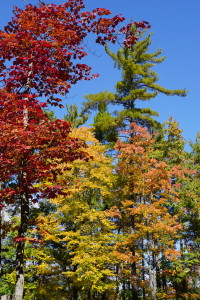 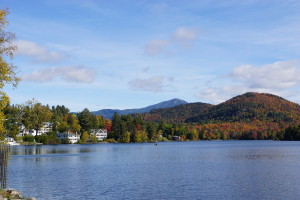 We chose to drive to Lake Placid, the lake, after walking the town on Mirror Lake.  There’s a road around Mirror Lake, but there is no direct way to get to Lake Placid from the town.  After trying to find an “easy” way to get there, we both agreed that it would “cost” us at least an hour or two if we’d continued on.  We chose to skip the lake and head on to Lake Champlain and the Cumberland Head Ferry to Vermont.   We were told that Lake Placid was at peak color.  What we were seeing at Mirror Lake was near peak color.  The temptation was high, but we thought by moving on to Vermont we’d have better opportunities.  Then we have been in New York for at least eight days.  It was time to move on and Burlington would be our next stop.   There’s the Burlington Coat Factory and Bernie S. had his political start in Burlington Vermont. 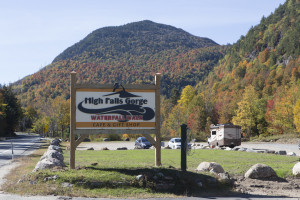 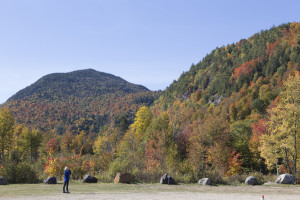 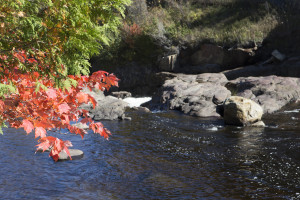 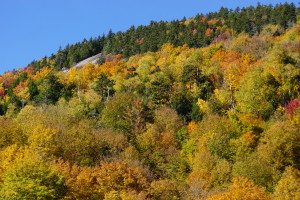 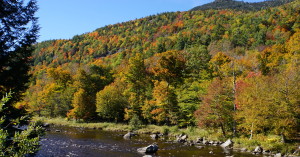 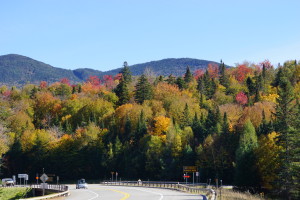 I drove past a sign for “High Falls Gorge” and noticed a waterfall to my left.  “Should we go back?”  Yes! We found a good place to turn around a quarter mile down the road and we retraced our path back to High Falls Gorge.    This is a privately owned and operated developed park with a cafe, a souvenir shop, and a wooden walkway with stairs, banisters, plexiglass underfoot viewing platforms, and guard rails and fencing.  It is a bit pricey at $11.50 each.  A group of seven people were justifying not not going at that price. We did pay and were glad we had. 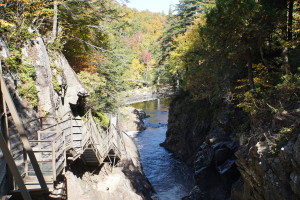 The day was brisk but sunny and the walk through the pines was invigorating; breathing in the pine, feeling the mist from the water falls, walking the maze of stairs, and incredible scenery were well worth the price. 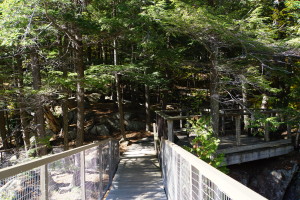 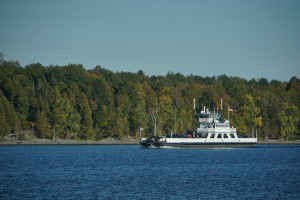 For someone taking the ferry for the first time be warned, our GPS had no idea where to catch the ferry and the signs for the ferry are spaced very far apart.  If we had not stopped a postal delivery guy, we might still be hunting for the ferry.  Worse still, when we realized we were “lost”, we stopped to dial in the ferry location on our iPhones, we both had “server unavailable” popups on our phones.  We were SOL until the postal guy “saved” us.

The ferry is well outside of the town of Plattsburgh, here.

Our GPS showed a 3:34 Pm arrival at the ferry.  We actually found the ferry at 3:56 for the 4:08 ferry.  Great, we paid the $19.75 for driver, 24′ RV, and 1 passenger and queued up in line #2 behind a sprinter van and beside two 18 wheelers.  The trucks went on, the cars went on, our line started forward and the sprinter van ahead of us was waved through.  We sat and watched the last few cars waved on from lane 1, the gates close, and the ferry pull away from the dock.  Crap.

But, the advantage?  We were first on the next ferry that arrived a mere 13 minutes later! No sweat.  Three ferries ply this route.  We were the first vehicle on the ferry and had a great front row view as the ferry steamed across the lake.   It felt more than a bit like I was driving Li’l Beast across the lake.  All I needed do is turn the steering wheel and we’d turn.  No, but it felt like that.  It was very cool being the first off the ferry too.

The ferry terminates on an island.  We drove the island to the causeway connecting it to mainland Vermont.  There’s a view point on the causeway and we had to stop.  The views are stunning. 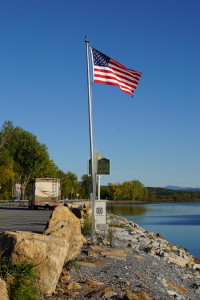 Memorial Stone honoring those that lost their lives during 9 -11 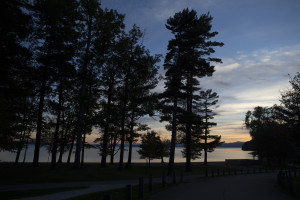 Ellen found three campgrounds past the bridge from Grand Isle; Lone Pines Campground, three stars,  Malletts Bay Campground, three star; and North Beach Campground, also three star.  We talked over the advantages of each.  North Beach was closer to the water and further on than the other two and therefore a better choice.  We could arrive well ahead of sunset, settle in, and be close to the water.  North Beach is a bit of a drive from Rt 84 through Winooski, past a huge graveyard, through a college campus, around some side streets, and down a dead end road to an entry with an 11 foot lintel welcoming RVs into the campground.  We stopped well ahead of the lintel, we are 3 inches too high to make it through.

We were third in line, busy at this time of year maybe due to college and Columbus Day holiday? We wanted an open view to the south and internet access and were told which might work for us.  We were free to drive around and pick a site.  Just come back and do the paperwork.  We chose #105 thinking it had an OK view to the south.  We have good web access, but poor sat reception.  We do get good off air HD.

As the sun set, we hooked up, closed up, and walked down to Apple Tree Bay to watch the sun set.  The view over the bay looking toward New York is not to be missed if you are in the area.  There were sail boats off toward Burlington, a large gaff rigged schooner sailing south on Lake Champlain.  The sun had not set, but it was below the ridge to our west.  The mountain ridges in New York were different shades of gray-blue as they receded into the distance.  Lake Champlain is a huge lake. 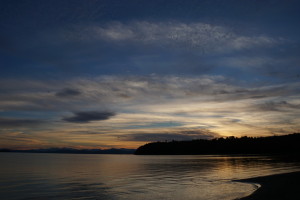 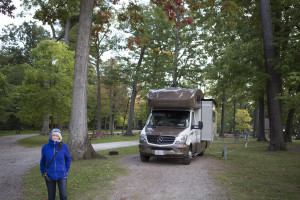 We are now comfortably ensconced in The Beast, snug and warm.