We’ve had issues with our Winnebago kitchen drawers flying open on moderate to sharp turns.  To solve this problem I had added a second 10 lb latch to the offending drawer.  That “fixed” the problem until today.  Taking a turn that particular drawer flew open and wouldn’t close properly.  I forced it closed and later discovered that the left side slider had failed (perhaps when the drawer flew open, more likely when I forced it shut).

Any Google search of RV slider failure will turn up numerous threads about replacing the slides.  “Any big box store should have what you need”.  So I have a repair job ahead.

The nearest home depot to Elwha Dam is in Sequim, 22 miles away: not happening.  There are two home depots near Victoria!  One is  km from downtown.  Aside from working in a cramped space, this should be easy.  I only hope I can find a drawer latch that works.

Last year’s plumbing fix appears to be holding just fine.  There’s no leak under the kitchen sink.  The line to the shower head has broken even though we have never used it.  I have a replacement from Camping World that I’ll install at Home Depot Victoria as well.

Friends ask/mention/suggest that we rent our RV to friends.  I am inclined not to do it.  I make repairs on Li’l Beast when the failure happens. The repairs I’ve made have been relatively easy,  If a repair is delayed, the could be secondary failures or additional problems.  A leak not fixed leads to water damage and rot over time.  If the drawer is not repaired, both the drawer and the enclosure could go out of square. Both are built of weak materials arguably to reduce weight (yeah, right).

I mentioned that the ‘fridge failed to run on propane when we stopped at Hama Hama Seafood.  It turns out that “error” latches, meaning a simple ‘fridge power off & on clears the latched error and all is well.  Who makes a device like that?  RV suppliers do.

With the temperature dropping I doubt I’ll see the ‘fridge fan making a racket again on this trip.

One last gripe.  The upholstery in the cab is wearing.  It is scaling off at the seams.  In Jackson Wy, a woman, a Winnebago View owner, asked how I liked the View.  I said I liked it just fine.  She unloaded on me about the poor quality of the seat material and that it was coming apart.  They had contacted Winnebago and expected the company to replace their seat upholstery.  Mine was in good condition then.  It isn’t now.  I’’ll be contacting Winnebago soon.

Ha, Ellen just dropped a portion of Ice cream on me.  We “discovered” Talenti Gelato Layers  Dark Chocolate Cherry and is it wonderful.  It is by far the best store bought ice cream in a container I’ve ever had.  (I’ll end on a high note) 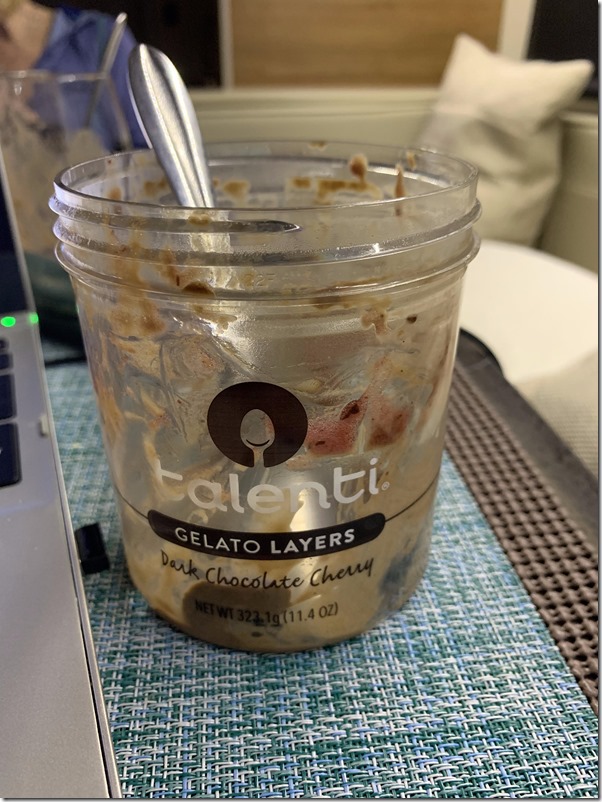