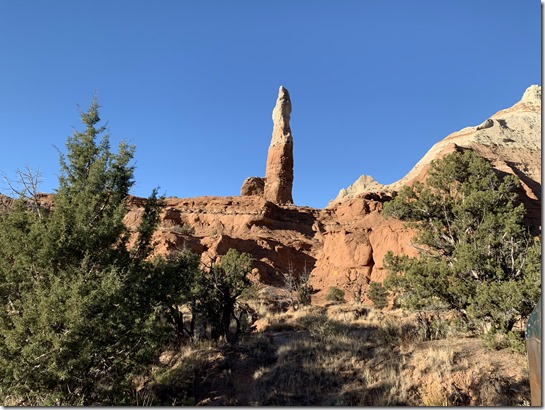 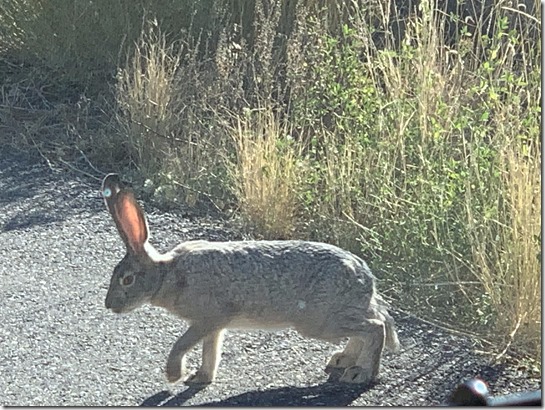 We had planned to get an early start.  Instead we chatted with a family from New Zealand.  They had flown into San Francisco, stayed for a few days, and rented a motorhome to tour the west.  They too had planned to visit Glacier National Park.  As with us, the weather turned them south.  They’re headed to Zion and the Grand Canyon next.  He said New Zealand is a very small island.  Go a few hundred miles in any direction and you’ll hit a beach.  This country is vast.  They enjoy getting away.  We talked about New Zealand,, The differences in motorhome etiquette around the world.  In New Zealand, you cannot just park a motorhome anywhere.  However there are many free parks designed for motorhomes.  Traveling about is easy and inexpensive.  We both marveled at the Kodachrome bathrooms.

They followed as we drove from the park.  They’re headed to Escalante and Capitol Reef next.  We’re off to Bryce Canyon.  At the fork we waved and honked as they turned right and we went left.

It’s a short drive from Kodachrome to Bryce Canyon, perhaps 45 minutes taking it slowly.  We passed Tropic, a small town along Ut-12 and a bit later turned south to Bryce Canyon  City.  We passed Ruby’s Inn RV Park and Campground to our right just before entering the park.  “Ok, we have a backup plan if the park’s campground is full.”  We skipped the visitors center and headed right to the north campground.  It was CLOSED! We drove on to Sunset Campground a bit further down the road.  It was open, but primitive: no electricity, no showers, no flush toilets.  With freezing temperatures overnight, we wanted electricity.

We drove back toward Ruby’s stopping at the visitors center on the way.  The center was busy.  There were cars coming and going and very little RV parking.  I was stunned at the people milling about inside.  We were fourth in line for the information desk as people rummaged through the trinkets and memorabilia on sale. “How long a hike do you plan to take?”, Sadie asked. For a four hour hike, she recommended the most popular hike.  The Navaho Loop Trail goes through Wall Street and connects with the Queens Garden Trail.  “That should take you about three hours more or less.”  That is the trail Han said “You have to take this trail.  It is fantastic; the highlight of our tip.”  We chatted with Sadie for a bit bout the Escalante, slot canyons, and Bryce.  She knew Peekaboo and Spooky well.  Coming back to earth,  we parted company as the information line grew behind us.

At Ruby’s RV Park, we pulled in behind a newer Winnebago sprinter van.  It was small, the size of a regular van with no slide outs.  “That looks really good”, I thought.  Inside the reservation desk, Ellen asked the van’s driver, “How do you like your RV?”  We had a big surprise!  Mike said, “I hate it. It’s too small for the two of us and we’re constantly banging our heads in the thing.  I’ve owned a number of motorhomes from 40’ to 34’.  We’re looking to downsize and thought this would be perfect.  It’s not.  I get more people asking about it than I’ve ever had with any other RV.  I tell everyone it is just too small for us.  It looks great, drives great, it’s easy to park, but it’s just too small.”   We kiddingly called them “the head bangers”.

Ruby’s had space for Li’l Beast.  Again we chatted with the four people at the desk about where to eat, weather, the campsite, and whatever crossed our minds.  As usual, we drove the park and found site # 125, nestled in some pine trees and reasonably close to the showers.

We found parking at Ruby’s General Store for supplies. We asked about restaurants and went looking for Ruby’s Inn Cowboy’s Buffet.  We first tried Canyon Diner.  We walked in; saw the Formica tables, lack of charm, and fast food feel; and walked out.  We walked back to the Cowboy’s Buffet, We had walked right by without noticing.  Lunch was good.  Sated and with a new “home” we headed back into the park. 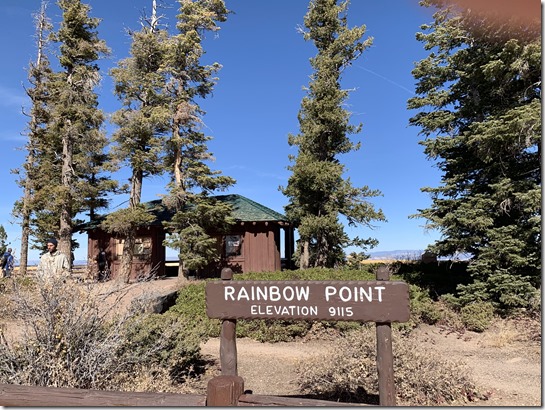 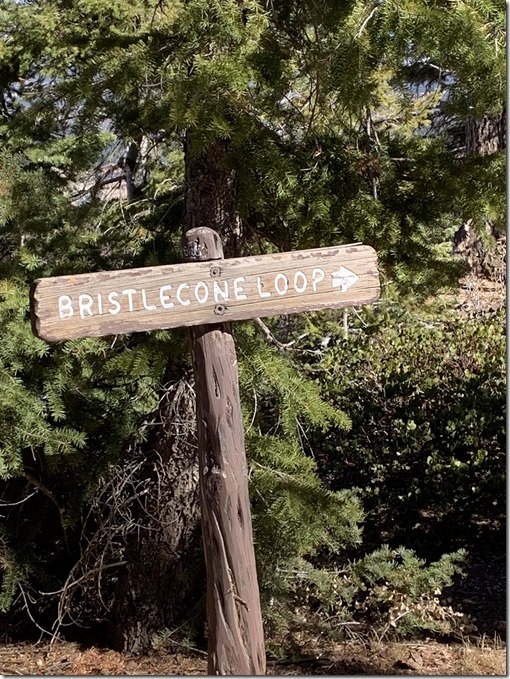 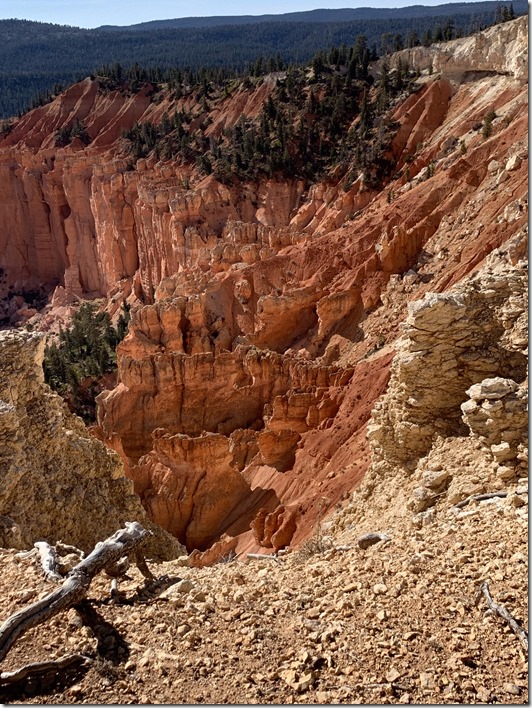 Taken Off Trail (oh, no) 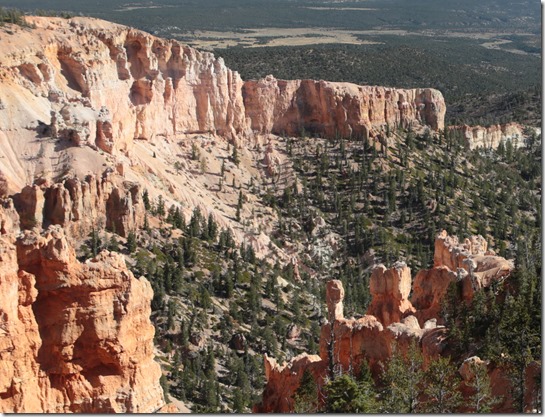 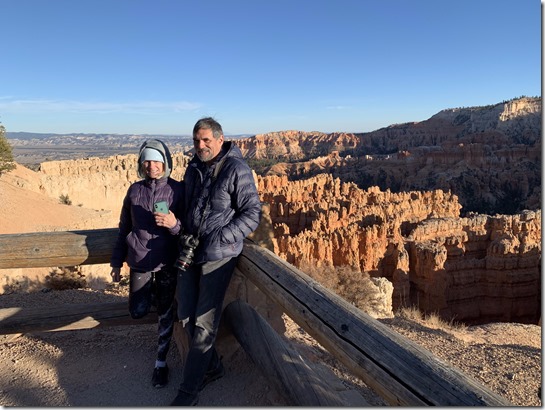 Taken by a “Good Guy” 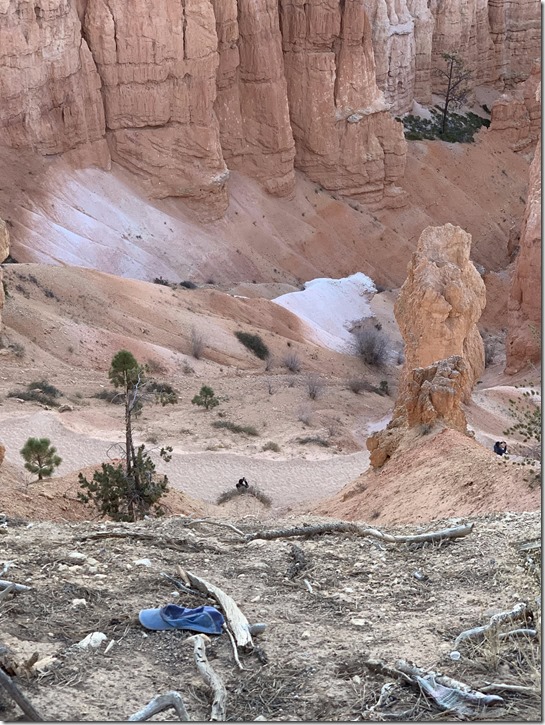 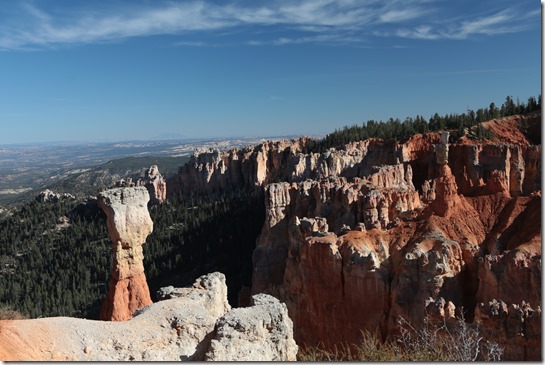 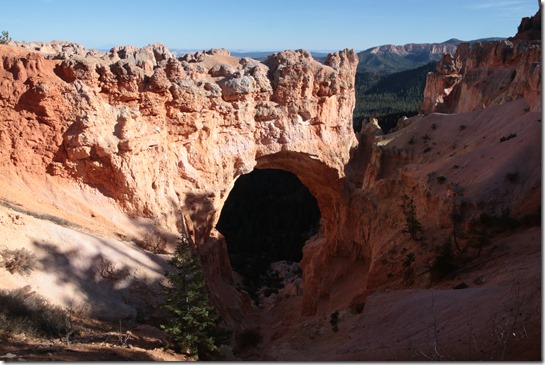 We drove back to the park and all the way down to Rainbow Point.  There were any number of picturesque turnouts we passed along the way.  “We’ll stop at each one on the way back”, I said, “But lets get all the way to Rainbow first.”  Ellen agreed.  I’ve never been to Bryce Canyon though I do know that Bryce Overlook is “THE” view in the park.  Why not build up to it a bit at a time.

Parking at Rainbow Overlook was easy.  There was plenty of room.  We walked to the view point as a ranger was describing the bristle cone pines and how fire management has changed over the years.  “Bristle Cone Pines are the oldest living things on earth!  The oldest is in the White Mountains of California.”

What a view from the overlook. We walked the bristle pine loop, which was unexpectedly long.  At one point the view over cliffs tempted us off the trail.  We indulged a guilty pleasure at the same time staying well back from the cliffs.

Driving back toward the park entrance we stopped at Ponderosa Point, Agua Canyon, Natural Bridge, and Fairview Point, before turning into Bryce Canyon Overlook.  The view from each of the turnouts was inspiring.  Surprisingly I found parking for Li’l Beast at each turnout.

At Bryce Point I had difficulty parking and eventually took two back to back spaces.  It was a tight fit, but we made it.  We loitered at Bryce Point marveling at the indescribable structures wind and water have carved in the land.  The hoodoos look so fragile, yet are so strong.  A cold wind swept the point.  Eventually we retreated back to the Beast.  We warmed up as we drove to Sunset Point.  The traffic in the sunset loop was moderate; parking was easy.  Again the view from the overlook was astounding.  With a rudimentary knowledge of geological processes, I can begin to understand how Bryce Canyon evolved.  It’s nearly impossible for us humans to comprehend action over geological timeframes.  That small actions integrated over huge time frames can result in a Bryce Canyon requires an intellectual leap coupled with scientific theories.  An understanding of how Bryce Canyon came to be is unnecessary.  Inquiring minds will always ask why and look for answers.  Still an understanding of how or even why is secondary.  We humans are drawn to beauty.  Bryce Canyon is startlingly beautiful.  It evokes an emotional response rooted deep in our collective past. 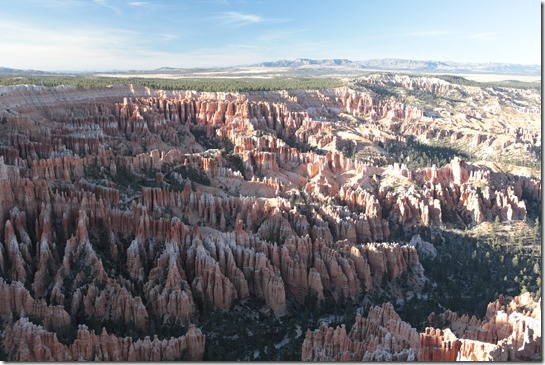 One View from Bryce Point 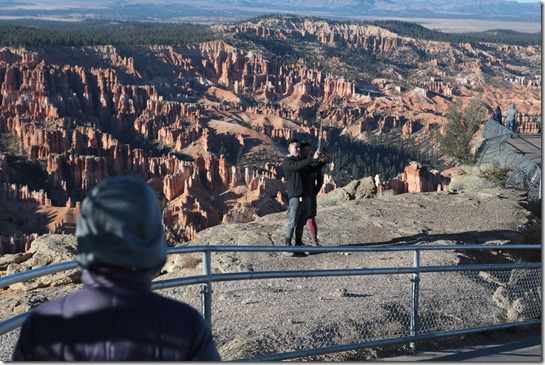 There’s always some Idiot in the Crowd (me off trail?) 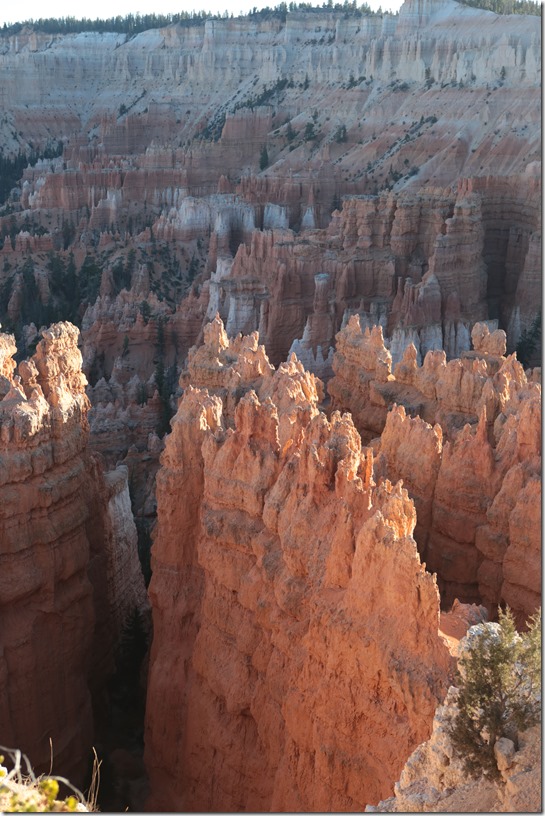 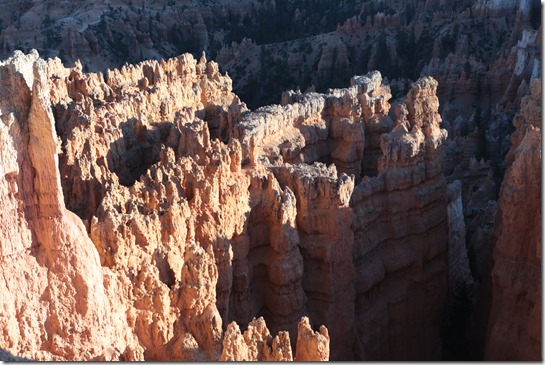 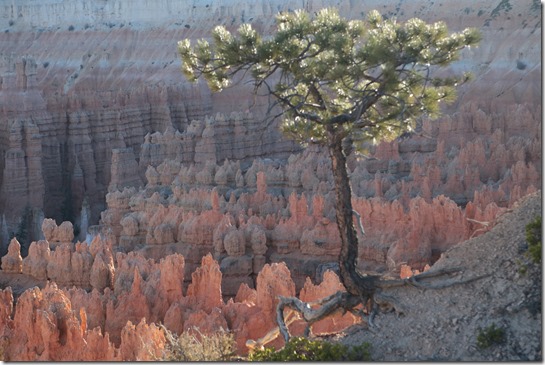 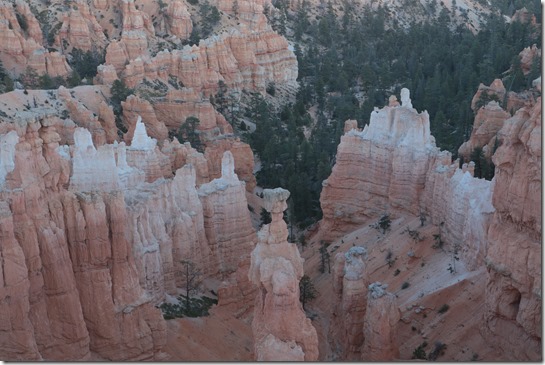 But They are Strong. 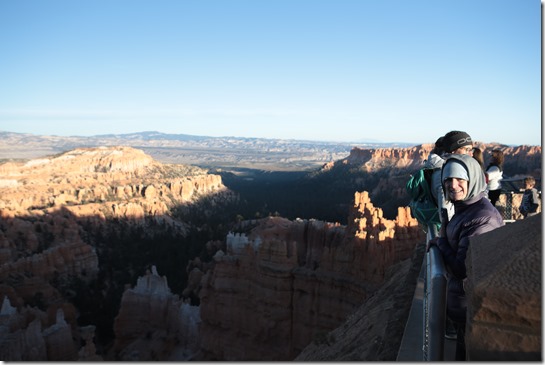 As the sun set, we chose to go to The Lodge at Bryce Canyon for dinner.  It brought back memories of our dinner with Chris at the Old Faithful Lodge.  We could eat without leaving the park. Rudy’s RV Park was just outside the park.  Life was simple.  Parking was a bit tricky, there were no RV spots.  We backed into a spot with a bit of overhand on both sides.  It was getting cold.  Our walk to the lodge was frigid. The lodge is rustic, though not nearly as rustic as the Old Faithful Lodge.  There was a line of couples waiting for a table.  We were seated in less than five minutes and right by forced air heaters in the wall beside our table.  We went from frozen to comfy quickly.

For dinner Ellen had stuffed Poblano chili.  I splurged with a Filet and a glass of Cabernet. Though not superb, our dinner was just what we expected.  Good solid fare, tasty if straight forward with no surprises.   We left nothing on either plate.  I recommend the lodge for dining within ten miles of the park.

Back “home” we hooked up, couldn’t bring in DirecTV satellites, chatted about the day, and hit the sack.

We’ll get up early enough tomorrow to find parking and hike the Navajo Loop Trail to the Queens Garden Trail from Sunset Point to Sunrise Point.  This is the route Han had raved about when we helped them in Capitol Reef.