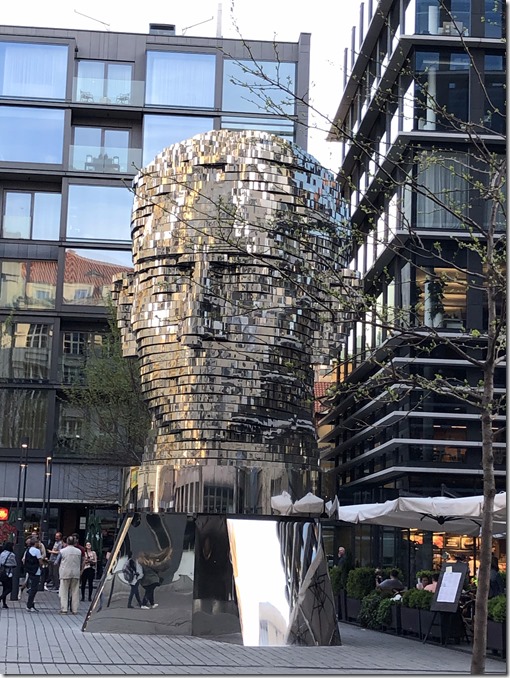 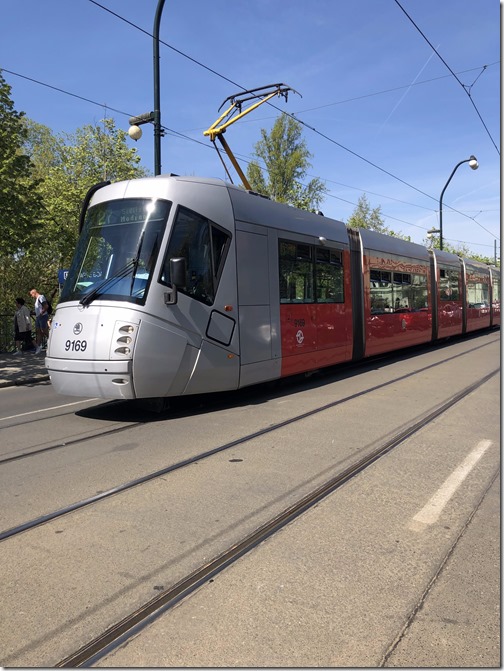 Easter Sunday in the Czech Republic

After breakfast at the Michelangelo Hotel, we left our bags and our car at the hotel and headed out.  With time limited, we took a tram to the Prague Castle.  More typically, we would walk, but we’d have to be back around 2 PM to free up our parking spot for the next guest.

A funny thing happened on the way to the forum!  As we approached the castle stop, I got off just as the doors were closing.  Turned back to see Ellen behind a closed door and nobody else had moved to get off.  I waved at Ellen who waved back.  We were both laughing. We knew/hoped the next stop was not far.  I walked.  Reunited, we laughed, but considered what could have happened had the stop been miles away and not a few hundred meters.

One of the Castle Gardens 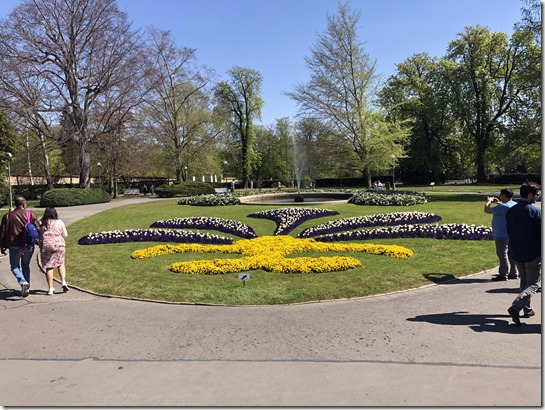 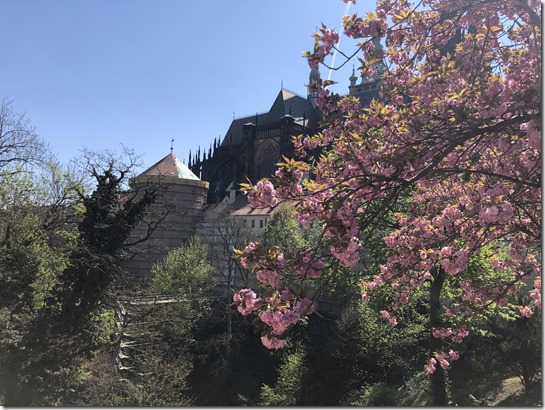 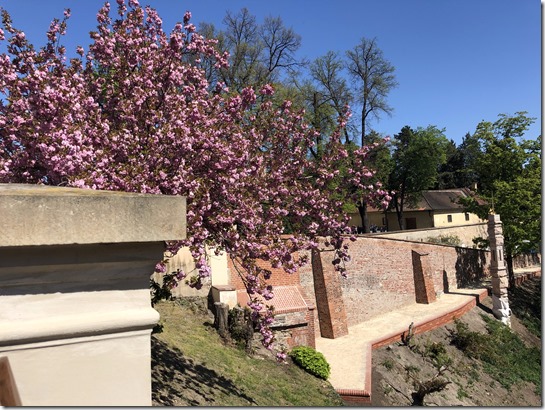 The castle complex is amazing.  We walked the grounds and considered taking an inside tour, but the lines were already extremely long.  There is no way we could take a tour and get back to our hotel before 2 PM.  “Next Time” seems a common mantra for us.  The next time we are in central Europe, we will include a stop in Prague.  It is a fabulous city.

From time to time we encounter a  national or religious holiday in our travels.  Invariably “things” take twice as long that day.  Our planned day in Bagnoregio Italy which happened to fall on a national holiday was a disaster.  We didn’t even try to approach the city bridge.  It was wall to wall people.  We skipped Bagnoregio.  The Czech Castle was not nearly so crowded this Easter, though it was still early in the day when we left. 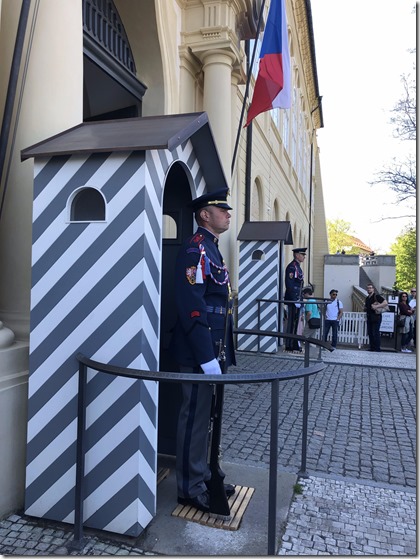 How Can Guards Keep So Still? 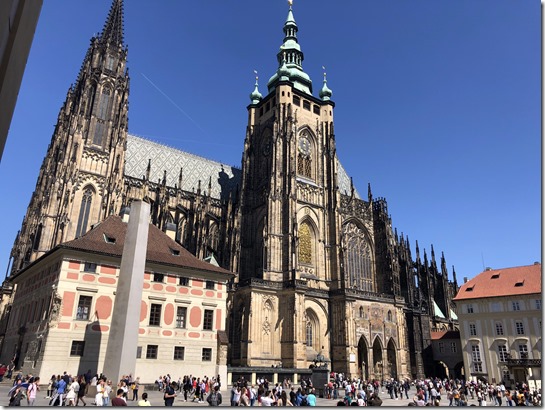 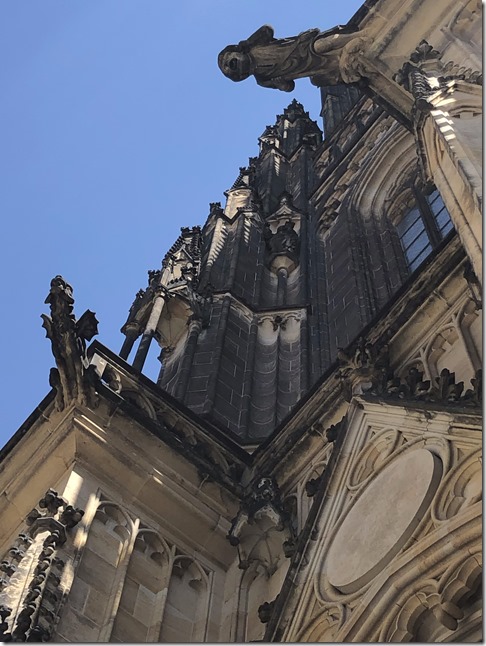 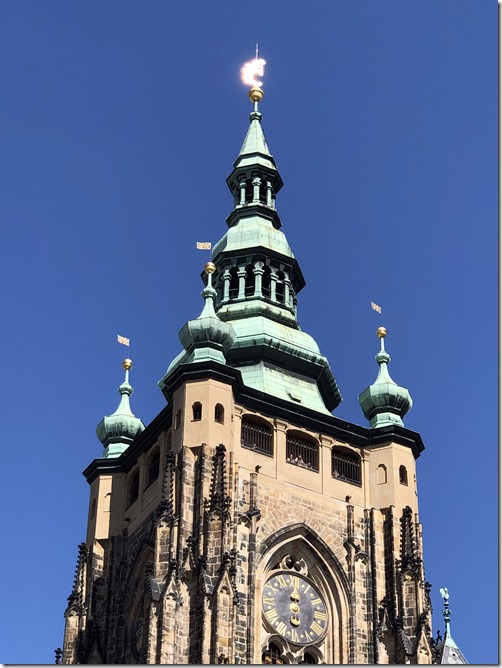 I’ll post a gallery of photos from the Castle a bit later when we have time to review our photos in more detail. 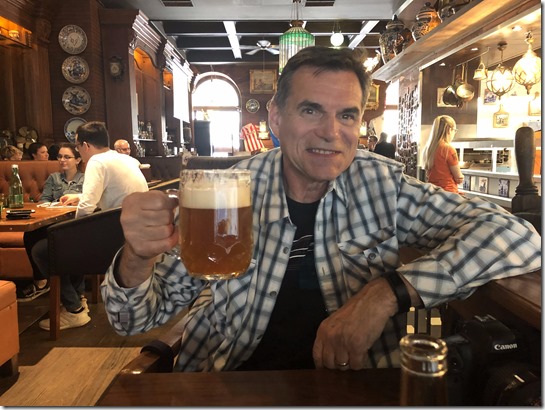 NOT your typical pilsner glass of beer!

There are ticket kiosks at the castle tram stop, Great.   A Japanese couple helped queue up a ticket, and the kiosk took change only; no bills.  Crap, we had no change.  Saved by the Japanese gal who offered us a 50 czk coin.  We promised to “pay it forward”.  At the hotel Ellen ask the concierge where we could eat locally.  “It is Easter and many restaurants may be closed.  You should try The Dutch Pub just down the street.  They may be closed though.” The Dutch Pub was open and very much like The Dutch Goose in Menlo Park Ca!  I ordered an IPA and a mini-burger sampler.  Ellen had water with lime and stuffed potato skins.  It was like eating at home, something we typically do not do.   The waitresses wore a bright orange T-shirt that read “ My Name is Not Susan and I am NOT 35.” 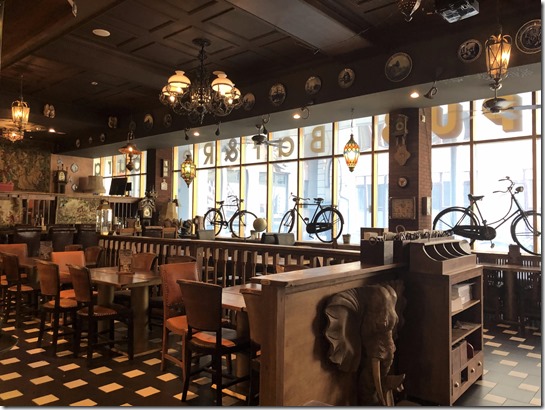 For a great lunch that is not your typical Prague eatery I highly recommend The Dutch Pub.

GPS in the Czech Republic

We loaded our luggage into our NOT VW Golf and backed out over the freshly painted yellow stripes.  I expected to have yellow tires, but the stripes had dried even though the painter was working on the next set of stripes.

Cool we were off, but NOoooo.  The City Navigation Europe map for our Garmin GPS would not load.  I fell back to Google Maps on my iPhone.  The map is accurate in the Czech region we drove.  The GPS navigation was infuriating.  Getting out of Prague it was bouncing between “turn right in 20 meters” and when we went straight “turn left in 20 meters” even though we were headed the correct direction as shown on the map.  This happened every minute or so.  We did find our way south and eventually found signs for Karlstejn.  Resetting and restarting navigation helped with the left/right turn snafu.  Funny though, when the signs and GPS deviated, I chose to follow the GPS.  That took us on a winding country road.  We passed small groups of cyclists, over 40 of them in all.  We went through small towns with a speed limit of 30 kph and sometimes 20 kph and around a few startling blind turns, “S” bends in the road were well marked, most of the tight 180 degree turns were not.  The  speed limit would go from 70 to 30 abruptly as you approach a tiny town.

The GPS took us to the small town of Karlstejn at the base of the castle mount.  I think the signs for the castle would have taken us to the top.  A win for the GPS, though Ellen may disagree with me here.  She was not a big fan of the tiny roads we drove.  There is a huge parking lot in Karlstejn with easy parking.  Take a ticket and pay at the kiosk before you leave. I imagine the lot would be full in peak season.

Two horse drawn carriages and two small vans sat waiting to take visitors to the castle.  The fee was 100 czk per person for a van, but the driver would not take two!  We’d have to wait for another couple.  Obviously he could have taken the two of us as it was mid to late afternoon and fewer people would be headed to the castle.  As obviously, he expected us to pay 400 czk and not wait for another couple.   I thought if we walked away the driver might just accept 200 czk and take us up.  We walked to the castle.   Along the way we passed a hotel sign.  I called.  Of course they were fully booked.

The road to the castle runs through the small town of Karlstejn (pronounced Carl-Stein with a trill on the “r”).  The town is a single row of houses/businesses on either side of the road that peter out the higher you go.  The castle itself is imposing perched right at the edge of the escarpment. 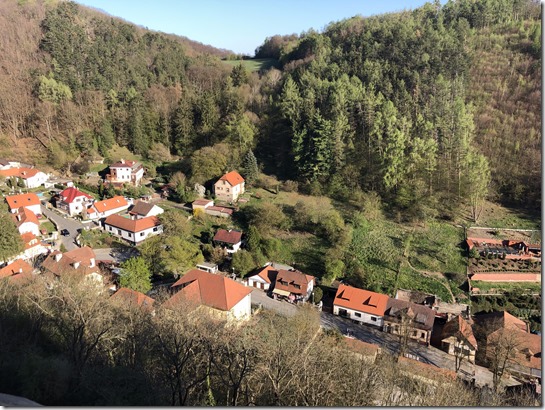 Karlstejn as seen from the Castle Walls 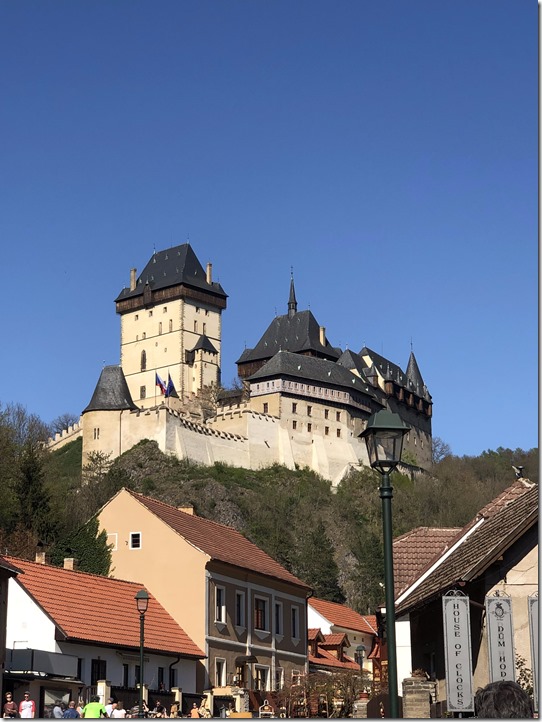 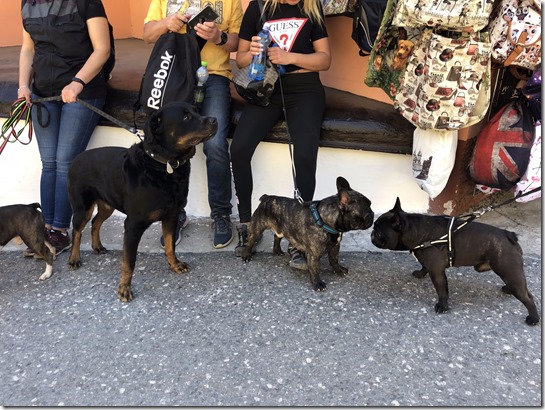 Frenchie Convention on the Castle walk 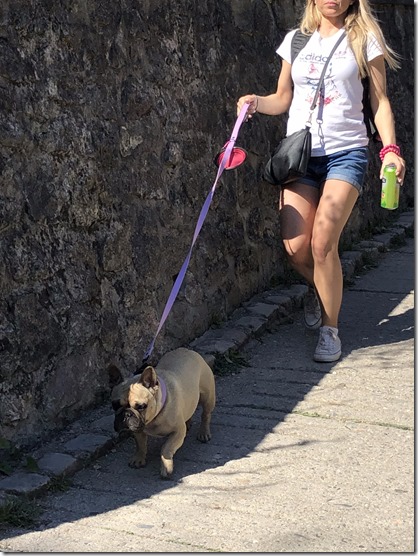 They Kept Coming Too! 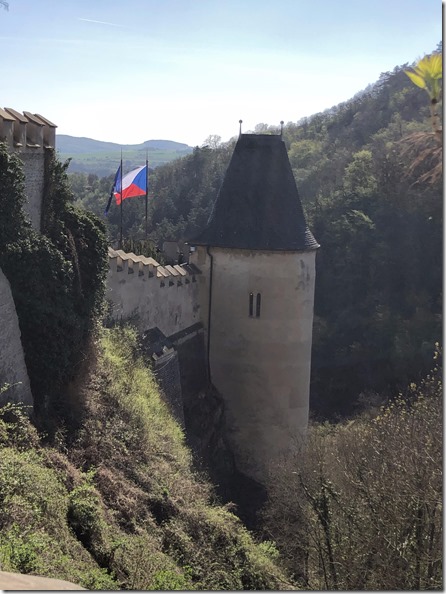 The castle was founded by King Charles IV Holy Roman Emperor and King of Bohemia.  Prague’s Charles Bridge is named for him.   (The Well Tower shown above was dug 230 feet and did not hit water.  A channel to tap into a nearby stream was dug that made the castle’s water supply vulnerable.)

Karlštejn Castle (Czech: hrad Karlštejn; German: Burg Karlstein) is a large Gothic castle founded 1348 CE by Charles IV, Holy Roman Emperor-elect and King of Bohemia. The castle served as a place for safekeeping the Imperial Regalia as well as the Bohemian/Czech crown jewels, holy relics, and other royal treasures. Located about 30 kilometres (19 mi) southwest of Prague above the village of the same name, it is one of the most famous and most frequently visited castles in the Czech Republic.

We wanted to take “Tour II” a 100 minute tour of the interior of the castle featuring the interior of the main tower.  We had arrived late (4:15 pm); that tour was booked.  We opted for “Tour I” in English (of course) that started at 4:50.   Our tour guide flooded us with information about the walls, construction, re-construction, and a veritable who’s who of Czech history.  Her English was fair to good; she did a good job.  Interestingly a black eagle is the symbol of “Good King Wenceslas”, who is a historical figure.  Consider the eagle impressed on German coins.  In black, that is the symbol of King Wenceslas.

As you would expect virtually nothing is original within the castle and much of the castle walls have been rebuilt.  The castle was attacked twice, though the castle keep, the main tower, has never been captured.  The castle was renovated in the 17th century and again in the 19th century.  There is a portion of a ceiling and part of a wall with the original tile and woodwork.

All in all the castle is impressive and well worth visiting.  I would go off season and avoid the crush of folks walking the street to the castle. 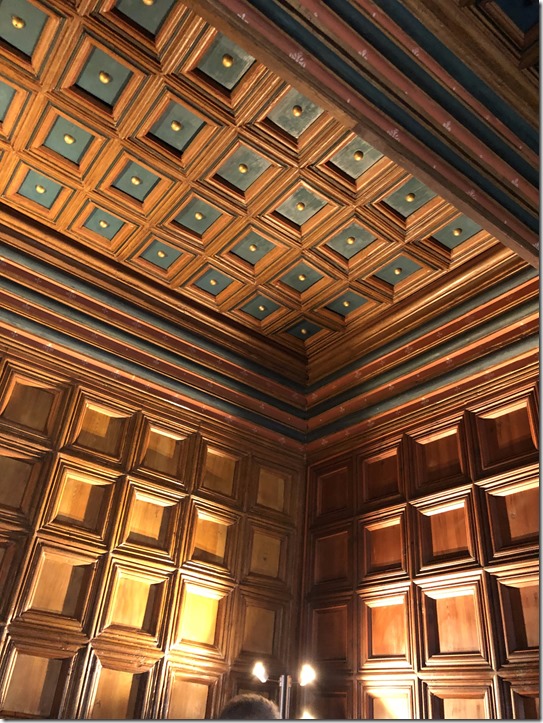 Mostly Reconstructed but with some Original Panels Too! 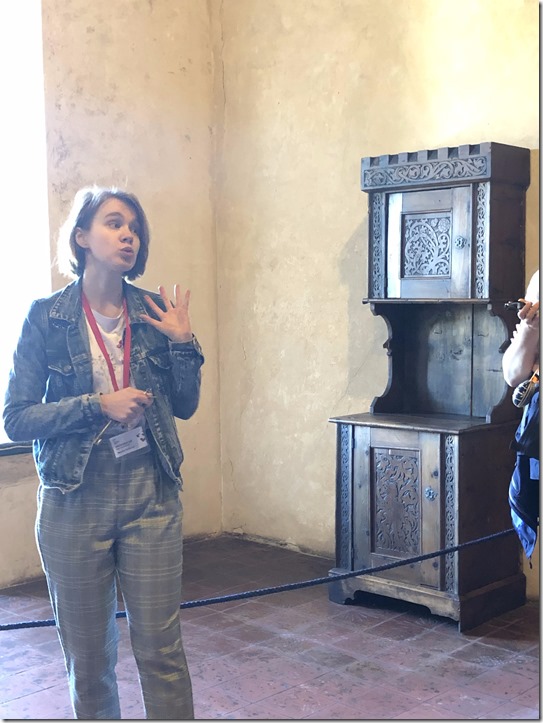 On the Way Back

We had a thirty minute wait for our English tour to start.  I checked booking.com for a nearby hotel and found a listing for “Romantic Hotel Mlyn Karlstejn” that showed a room available today.  Really?  I booked the room and had confirmation in hand fast.  Unbelievable. We would not have to drive these un-lit winding roads at night to find a room.

Back at the parking lot, I paid for parking and dialed the hotel into Google Maps.  There was the hotel on the map, and there we were.  No Problem, right? Wrong.  First I drove past the left turn & had to turn around.  I’m getting quite adept at turning around.  Next we found the (now right) turn.  A sign said “No Heavy vehicles, or trucks”  (don’t ask how I knew what it said in Czech).  Off we went down a single lane road that became dirt and led to a closed gate to farmland.  Terrific.

Looking at the map, which is accurate and makes me wonder how the navigation could be so messed up, I saw a road running parallel to the miniscule trail we had just drive that looked to go right to the hotel.  Another eight point turn later, we found the correct road complete with signs for the Romantic Hotel.  And it is a Romantic Hotel that has won Trip Advisor’s best poll in 2013.  I know, “Trip Advisor” is not a glowing recommendation and 2013 is ancient times, but this hotel was fun.  The food is good to excellent.  It has outdoor seating on a veranda overlooking the low head dam and river.  Veronica, the manager, knows how to treat her guests well.  I would highly recommend this hotel.

As for pricing.  Our dinner which consisted of two beers, a vodka, a mango juice drink, an appetizer, soup, a grilled side of veggies, a heaping plate of small golden potatoes, and pork sirloin in plumb sause was 921 czk or $36!  The room was just over $100. 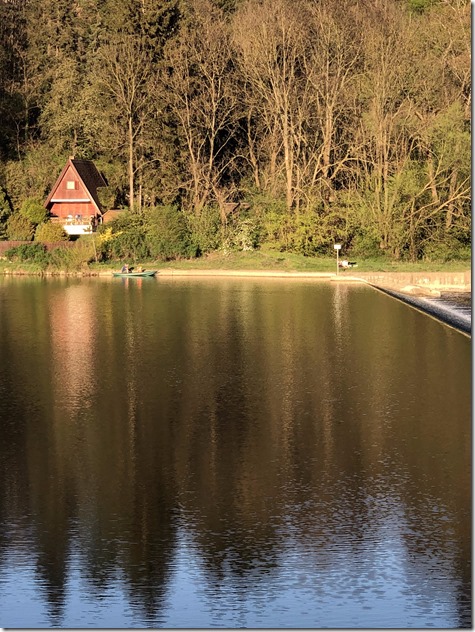 A View from the Veranda 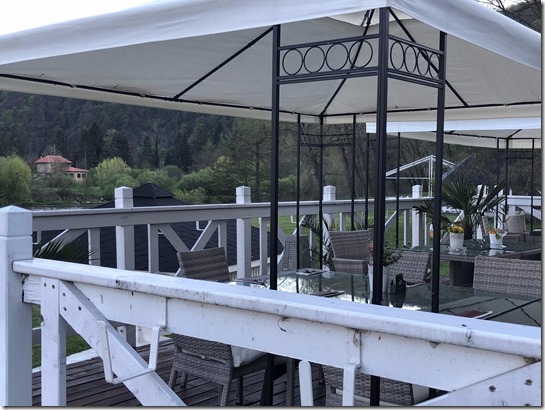 Empty Before Dinner, Full for Dinner 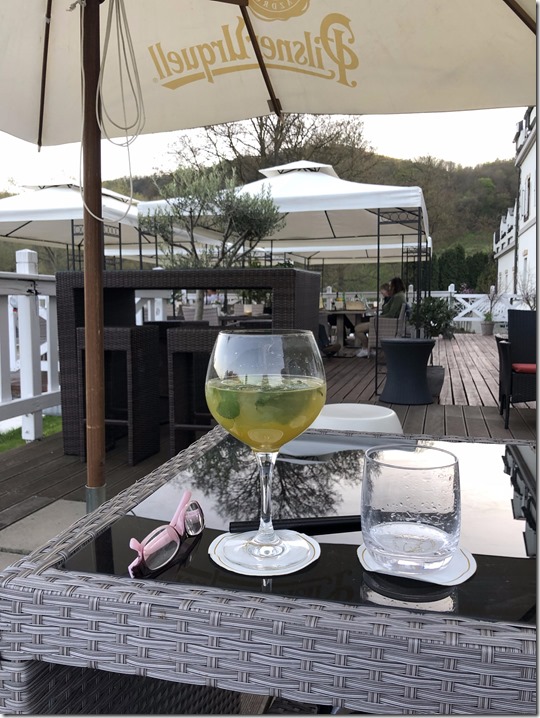 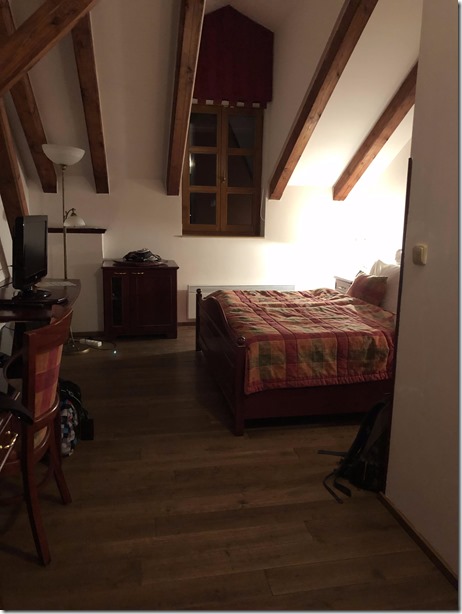 Today we push on toward Bayreuth, though we certainly will not make it that far.